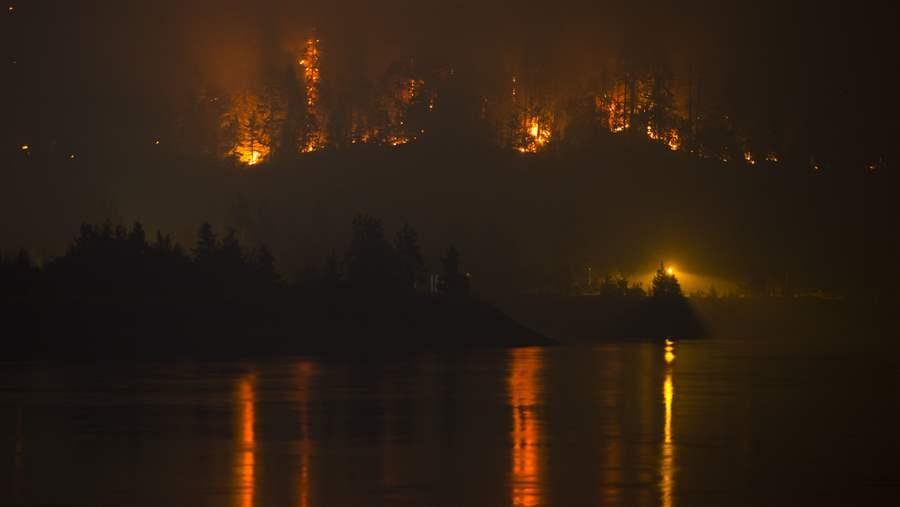 A September wildfire burns in Washington state. In nearby Montana, the state’s worst fire season in years continued to scorch the land long after the state’s firefighting reserves had run out.

Editor's note: This story was updated Oct. 6 to correct Oregon’s spending on fighting wildfires this year.

The wildfires that tore through over a million acres of Montana this year damaged homes, cloaked communities in smoke, and burned a hole in the state budget.

With winter snow already falling, Montana’s blazes mostly have subsided. But the state now faces a $200 million budget shortfall exacerbated by the record cost of fighting wildfires, Gov. Steve Bullock, a Democrat, said in an early September statement explaining the crisis. “We are also facing the most expensive fire season in state history, requiring spending of over $60 million to date.”

State and federal lawmakers across the country are looking back on a record fire season and asking whether there’s a way to better prepare financially for major wildfires. The federal government spent more than $2 billion on fires from Florida to Washington this year. States spend untold millions more.

As the wildfire season lengthens and the fires become larger and more dangerous — a trend driven by a number of factors, including climate change — both state and federal natural resource departments are spending more time and money on firefighting and less on other forest management programs that help the land recover after wildfires, or lessen the impact of future fires.

Western states typically spend less than 1 percent of their general fund each year on wildfire suppression, according to a University of Idaho research group that advises the state Legislature. When fires are severe, budgets are tight or both, the share can spike above 2 percent.

Such percentages seem small but can still have a big impact, said lead author Dennis Becker, an associate professor in the department of natural resources and director of the policy research group.

In states with small tax bases such as Montana, expensive fires in a tight budget year can wipe out reserve funds and escalate a fiscal crisis. 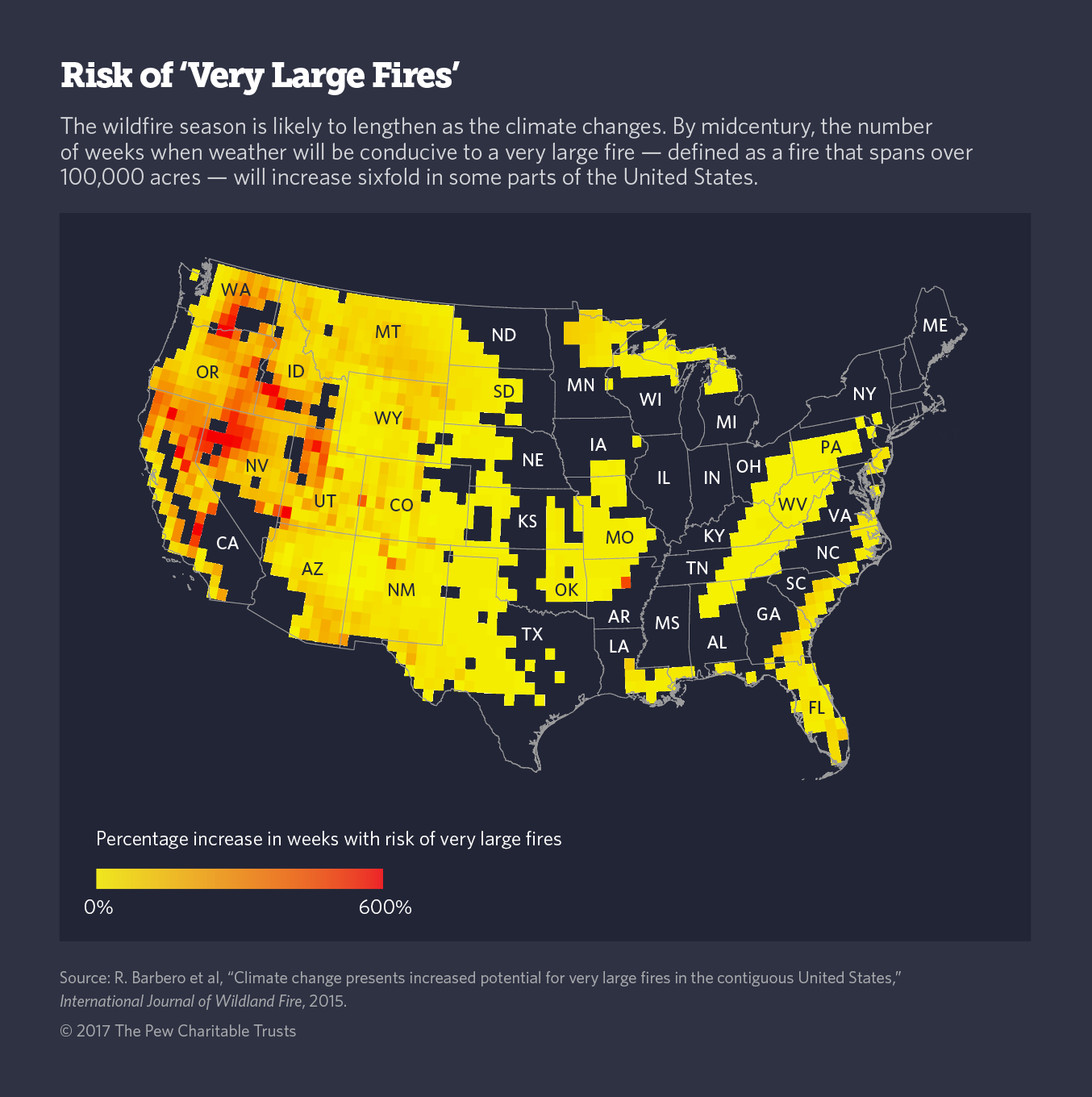 Paying to Put Out Fires

Each state pays for wildland firefighting slightly differently. Lawmakers in many wildfire-prone states set aside part of their general fund each year for fighting fires. Programs in Oregon and Washington are partly funded by taxing timber companies and other forest landowners, for instance. Most states also set aside pools of money to pay for natural disasters and other emergencies.

But sometimes that extra money doesn’t go far enough. Then it’s up to lawmakers to figure out how to cover the extra cost.

“When there’s an emergency, the money gets found, someway, somehow,” said Mike Morgan, the director of the division of fire prevention and control at the Colorado Department of Public Safety. In Colorado, most counties pay into a wildfire suppression fund that generates about a million dollars a year, he said. The money runs out quickly. “Some of these big fires can [cost] a million dollars a day,” he said.

One of the biggest fires in Colorado’s recent history, the Waldo Canyon fire, burned near Colorado Springs in 2012 for 17 days and cost over $16.6 million to suppress, according to the National Wildfire Coordinating Group, a multiagency organization that helps coordinate wildfire suppression operations.

When Colorado’s wildfire suppression fund is exhausted, the governor declares a state of emergency and state lawmakers scramble to find more money. They often end up taking money away from the capital budget used to pay for maintenance projects, Morgan said. “We’re robbing Peter to pay Paul.” 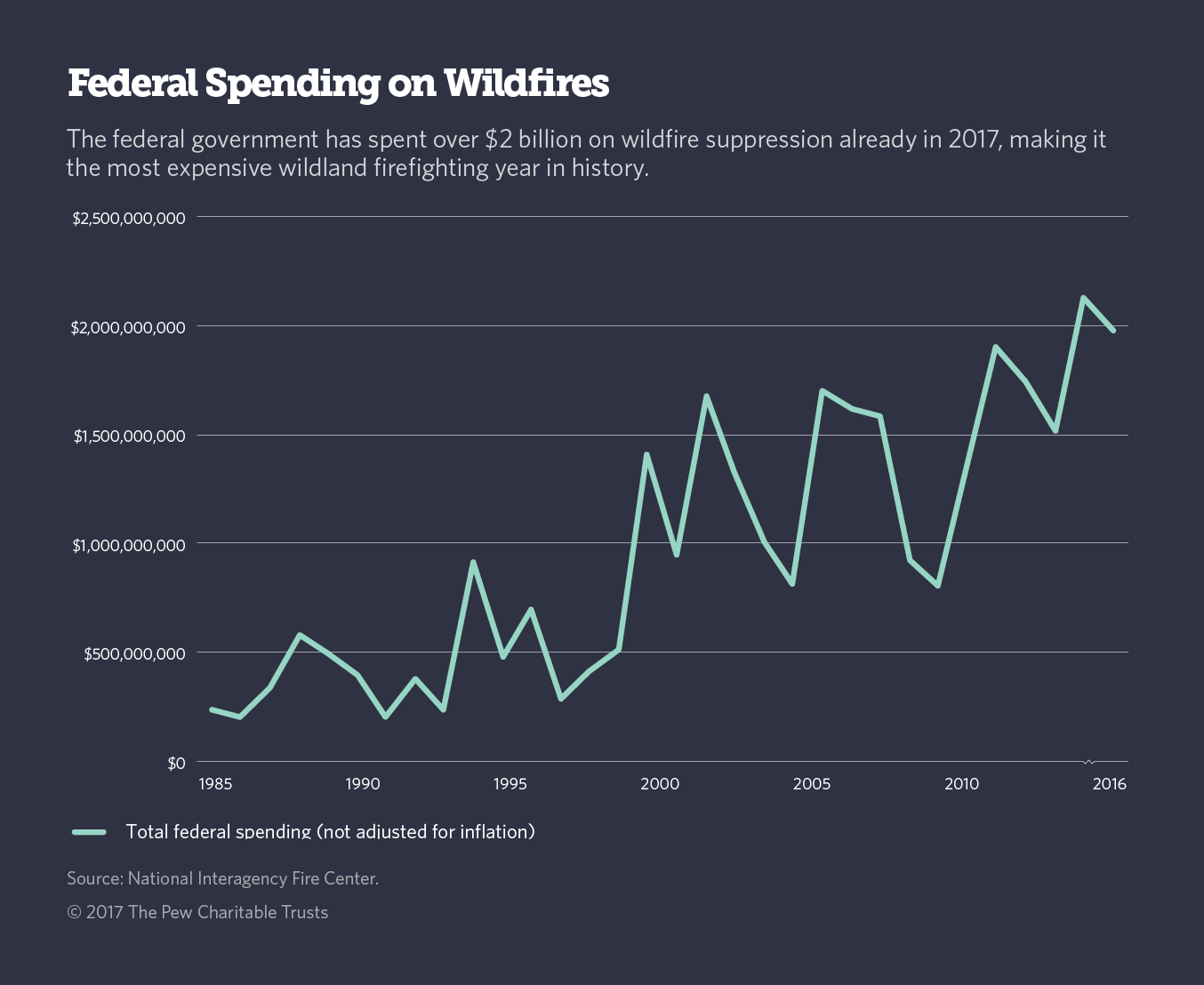 It can take months to tally the cost of a bad fire season.

The federal government typically pays to put out fires on federal land, and states pay to put out wildfires on state and private land. But fires often straddle property boundaries. And when a fire starts, the fire crew closest to it will rush to the scene regardless of jurisdiction.

To complicate matters, a dangerous blaze that threatens homes, roads, reservoirs and other infrastructure can involve local and state firefighters, firefighters from other states, and state or federal equipment such as bulldozers and air tankers.

“It’s like an instant army that shows up,” said Gary Schiff, policy director for the National Association of State Foresters, a Washington, D.C., based nonprofit comprised of the directors of state forestry agencies.

The Federal Emergency Management Agency will reimburse states for three-quarters of the cost of putting out fires that threaten lives and critical infrastructure. But some fires are too rural or remote to qualify. States also spend a lot of time and money putting out smaller, less dangerous fires.

Reimbursement from the federal government and other entities typically covers a fraction of a state’s spending on fire suppression, Becker’s study found. In 2015, an extreme fire year, the nine states his team studied collectively spent $1.8 billion to fight wildfires. They were reimbursed by the federal government and other payers — such as other state and local agencies — for nearly $300 million.

Montana used to pay for wildfires after they happened. A few bad fire years in the 2000s made that strategy untenable. In 2007 the state created a wildfire suppression fund which currently receives revenue from surplus money found in state agency budgets and the governor’s emergency appropriations.

State Sen. Pat Connell, a Republican who helped craft the current funding mechanism, said it has worked well every year — until this one.

Montana came into 2017 facing a budget shortfall due to lower-than-expected revenue from taxes, fees and mineral royalties. Legislators passed legislation in May that authorized the state to withdraw $30 million from the wildfire suppression fund if the revenue situation didn’t improve.

The money was withdrawn in July, leaving just over $30 million to pay for fighting fires. “That $30 million went up in smoke,” Connell said.

He said FEMA will help cover the cost of six of this year’s major fires in Montana, but it’s unclear what that will mean for the state’s bottom line and when the federal money will arrive.

In Oklahoma, an ongoing budget crisis has squeezed the state’s Forestry Services Division and driven up the cost of fighting fires.

Years of budget cuts have whittled the division down to 130 people, including administrators, at a time when the state is seeing more frequent major fires, said George Geissler, the Oklahoma state forester. “We do not have the capacity, within our state, with our own personnel, to fight these fires.”

He said he’s become more dependent on expensive out-of-state resources and on tapping the state’s emergency fund. After a major fire, his team waits for the invoices to trickle in with their fingers crossed. “We’ve come very close to thinking — how are we going to make payroll?” he said.

In Oregon, state lawmakers will have to find an additional $22 million to cover the cost of fighting large wildfires this year, according to Amy Patrick, director of forest protection for the Oregon Forest and Industries Council, a trade association.

Such a large additional appropriation is unusual in Oregon, which has bought catastrophic wildfire insurance from Lloyd’s of London almost every year since the 1970s. It’s the only state that uses insurance to help pay for wildfire suppression.

Oregon’s premiums and deductible have risen along with its fire risk, however. This year the state spent $38 million on large wildfires, according to the Oregon Department of Forestry — not enough to hit its $50 million deductible. The state expects about $6 million in reimbursements. A wildfire suppression fund landowners pay into will take care of another $10 million in fire costs.

As fires get worse, states need some kind of cushion to protect themselves from a costly year, Becker said, whether that’s an emergency fund, an insurance policy or another mechanism.

In Idaho, state forester David Groeschl said his department hired an outside contractor to take a close look at its budget and make recommendations for improving the way the state pays for fighting wildfires.

“It’s something that everybody’s taking a look at right now,” he said. “How do you do this without breaking the bank?”

Connell said he still thinks Montana’s wildfire suppression fund is a good solution to the state’s wildfire budgeting problem. But now the fund is empty, and he’s not sure his colleagues in the Legislature will be eager to make a one-time appropriation to fill it back up. “There is no money in the till for 2018,” he said. “It will be problematic.”