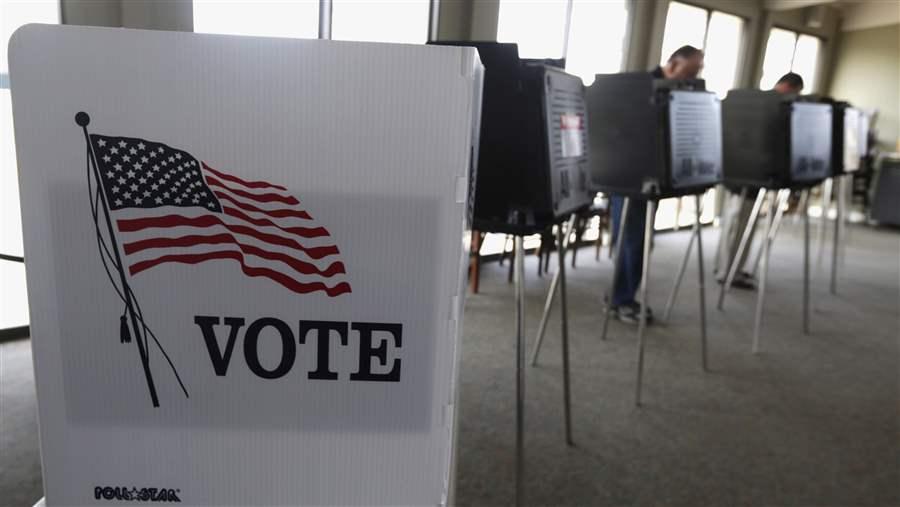 Voters cast their ballots in an Illinois primary. State election officials often come under fire for their handling of voter rolls, and a case before the Supreme Court could offer some guidance.

Local and state election officials have long faced the difficult task of facilitating one of democracy’s central tenets: figuring out who to take off outdated voter rolls without disenfranchising eligible voters.

Increasingly, though, officials find themselves caught in the middle as competing interest groups from the right and left work — often through the court system — to influence how thousands of local election officials do their jobs.

The latest case, involving Ohio, goes before the Supreme Court this fall. It again pits conservative and liberal advocates against each other but it also promises the possibility of judicial guidance on how to maintain both access and integrity in local voter rolls.

“I can tell you why there are so many lawsuits,” said Gary Bartlett, a former executive director of the North Carolina State Board of Elections and Ethics Enforcement. “It’s because there are a lot of differences of opinion, and groups are trying to get an advantage — whether it’s a political party or association or some nonprofit that thinks they’re doing the Lord’s work.”

The resulting turbulence is costly and frustrating, and it brings about, as several groups of local and state officials point out in a recent filing at the Supreme Court, “a dizzying number of challenges.”

Beyond working with varying funding levels and resources needed to pull off an election, said Lisa Soronen, head of the State and Local Legal Center, which filed the brief, “there’s a tension of if you don’t do enough to remove people from the rolls you get sued, and if you do too much you get sued.”

Conservative groups such as Judicial Watch and the American Civil Rights Union (ACRU) often bring suits arguing officials haven’t sufficiently cleaned their lists, while voter rights groups such as the Brennan Center for Justice and the League of Women Voters typically file suits that claim actions taken by states would keep eligible voters from voting.

Many election officials say they have become immune to the noise.

Indiana Secretary of State Connie Lawson, a Republican, said she always felt “if no one was happy, I was doing a good job.” The state is now fighting litigation over a voter registration list maintenance law passed this year. “We do strike a good balance here. I know there are groups that will file lawsuits against us whether we do it correctly or not.”

But the groups that sue over states’ methods of maintaining their voter rolls argue that officials are, in fact, not doing it correctly.

In Ohio, officials are being sued for sending confirmation of address notices to registered voters after they failed to vote in an election, initiating a process that could remove them from the rolls. The groups suing over the law, including the American Civil Liberties Union, say Ohio’s action violates a federal law that bars removing registrants for not voting.

Georgia has faced multiple suits this year from the ACLU and the NAACP for a number of its election practices. And a court recently dismissed a suit from the conservative ACRU against Philadelphia that claimed it was not doing enough to remove felons from its rolls.

Vanita Gupta, who ran the U.S. Department of Justice’s civil rights division in the Obama administration, said the National Voter Registration Act (NVRA), known as the “motor voter” law, and the Help America Vote Act should be easy to follow.

“There already is a law that exists that talks about that process,” she said in a recent interview. “And it lays out the way in which states can determine that voters can be purged off the list, and it’s very explicit.”

States have a vested interest in keeping their lists up to date. Election officials don’t want to waste money sending election materials to people who will never receive them. They also say wait times at polls can grow if workers have to flip through pages with the names of people who have moved or died.

Typically states use change of address forms, Social Security death data and other information to identify people who should be removed from their lists. Those voters often are then sent a notice asking to confirm they are still at their address. If they don’t respond and then don’t vote in the next two federal election cycles, they can be removed from the voter rolls.

In April, Judicial Watch sent a letter to counties in 11 states where the number of registered voters exceeded the number of eligible residents, warning the group would sue if election officials didn’t start removing names from the list.

The group, which targets governments it says has not done enough to clean up lists, had an immediate impact. Largely Democratic Montgomery County, Maryland, announced it would review its practices after receiving the letter.

Bob Popper, director of Judicial Watch’s election integrity project, said the NVRA has two main sections — one making it easier for people to vote, the other requiring election officials to do more to clean up rolls.

“There’s a lot of litigation by people who want to defeat one half of the compromise,” Popper said, but both need to remain in place to preserve the balance.

Willie Miller, an election commissioner in Noxubee County, Mississippi, said her county got hit with a similar lawsuit in 2014. In that suit, the American Civil Rights Union (ACRU) pointed out that the county had more registered voters than voting-age residents.

The group wanted the county to send a confirmation of address notice to every one of the 9,000 registered voters in the county. Miller said the poor, predominantly black county simply didn’t have the money to do that, but with the help of a pro bono lawyer, officials agreed to send out mailers to 1,500 people on the inactive list. Of those, only 400 people responded. The rest faced being removed from registration lists if they didn’t vote in the next two federal elections.

Miller said groups like the ACRU “pick on” poor counties like hers that can’t put up much of a legal fight. The group has filed similar suits in three other Mississippi counties within the past several years, along with others in Texas and Florida. The ACRU did not respond to repeated requests for comment.

“We’re just used as guinea pigs to see how well they can do and get a federal judge to approve what they’re doing,” Miller said. “Then they go somewhere else and say, ‘We did this in this county in Mississippi.’ It makes it look better for them.”

Myrna Pérez, director of the Voting Rights and Election Project at the Brennan Center, said election officials do have a difficult job. “I’m very sensitive about the line they have to walk. They can’t go too much in either direction or they’re going to get themselves in trouble with someone.”

But some methods election officials are using are simply illegal, Pérez said.

The Brennan Center is suing Indiana for enacting a law that would require election officials to enter a person’s name and birthdate in a program called Crosscheck to see whether the person has registered in another state. Critics have questioned the accuracy of the program, but Pérez said the biggest issue is that a person would be immediately removed from the rolls, rather than receiving a notice in the mail questioning her status and then waiting two election cycles before being removed.

Ohio has come under fire for sending out notices to people who do not vote in a single election, which some argue violates the provision of federal law that bars striking a registered voter from the list for failure to vote. Popper said the state isn’t taking people off the rolls for not voting, it’s only sending out confirmation of address notices based on not voting. According to the League of Women Voters, five other states (Georgia, Oklahoma, Oregon, Pennsylvania and West Virginia) use similar methods.

Many states, aware that the Supreme Court’s decision will affect the whole country, have offered opinions on the Ohio case.

New York and 11 other mostly Democratic states filed a brief saying Ohio erred in assuming that making the choice to not vote in an election signifies someone has moved. Others, including Georgia and 16 other largely conservative states, filed a brief in favor of Ohio but said states needed more clarification as to what methods would meet the NVRA’s requirement that they make a reasonable effort to remove unnecessary names from the list.

The elected officials who have to carry out the missives have their own opinions about what the justices might do.

“They could provide some sort of clarity but still give states the flexibility to operate elections,” Jim Condos, secretary of state for Vermont, said. “The goal should be to maintain an accurate list that ensures that every eligible American is allowed to vote.”