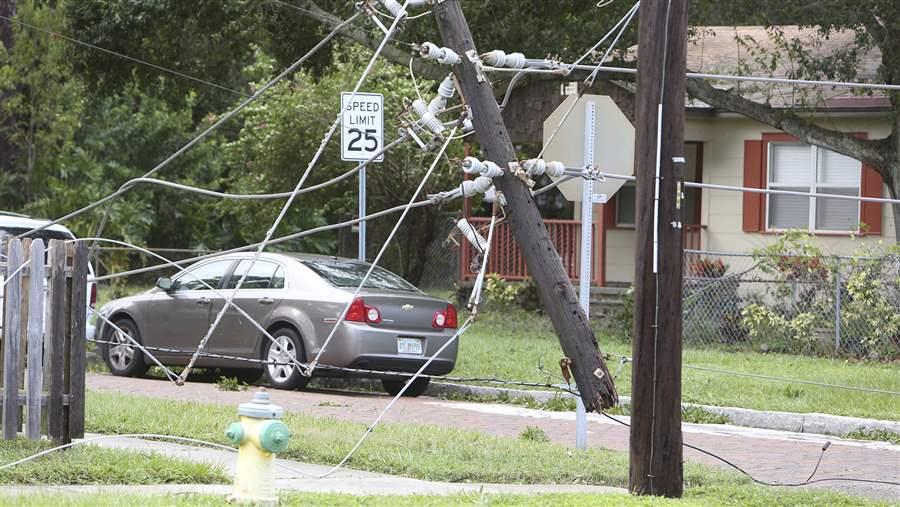 In the aftermath of Hurricane Irma, large swaths of Florida went without power for days. Sweaty and frustrating for millions, the lack of electricity could have been deadly for tens of thousands of mostly elderly Floridians who rely on home health equipment such as oxygen concentrators, ventilators, motorized wheelchairs and dialysis machines.

But in much of the state, first responders and public health officials knew exactly where the most vulnerable residents lived and what their medical needs were.

That’s because Florida, like a handful of other hurricane-prone states, requires counties to create registries of residents who are most vulnerable to severe storms and the prolonged power outages that follow them. Some states also maintain their own databases of medically fragile residents.

As the U.S. population ages and more people opt for home health care services instead of lengthy hospital and nursing home stays, the number of Americans who rely on the electrical grid to power life-sustaining home devices is soaring.

That fact, combined with climatologists’ predictions that the number of major storms is likely to increase, puts an increasing number of Americans at risk when the power goes out.

Hurricane Sandy, which hit the East Coast in 2012, caused prolonged power losses for millions of residents in 17 states and sent hundreds of medically fragile people to hospital emergency departments to plug in their devices. At the same time, people with life-threatening injuries were crowding the same hospitals, creating chaos and death.

That’s when the U.S. Department of Health and Human Services (HHS) decided to help states locate and care for electricity-dependent residents during natural disasters. Using Medicare claims data, the agency created a database of people who use home medical equipment paid for by the federal insurance program for the elderly and disabled.

The database, emPOWER Map 2.0, includes more than 2.5 million people, an estimated 90 percent of Americans who use electricity-dependent medical devices. For each entry, the system provides an address and other contact information, as well as details on what types of medical equipment the person uses. Updated monthly, the online database also includes weather tracking information to help local officials plan for emergencies.

Since its launch in 2015, emPOWER has been used by health officials in 43 states, five territories and three cities to plan for the emergency needs of 3.8 million people with medical devices, according to HHS. Most recently it was used in the U.S. Virgin Islands and Puerto Rico to locate and evacuate dialysis patients following Hurricanes Irma and Maria.

When Hurricane Irma hit, in September, it caused one of the nation’s largest power outages ever measured. More than 16 million people lost power in the Southeast, about 7 million of them in Florida.

Eight people died in a sweltering nursing home after the storm knocked out its air conditioning system, and Gov. Rick Scott, a Republican, later issued an emergency ruling requiring all Florida nursing homes to have backup power systems.

Instead of using the HHS database to identify people with home health equipment, Pedigo’s agency tapped into its own directory of about 2,800 residents with special medical needs to determine the staffing and supplies needed for medical shelters. 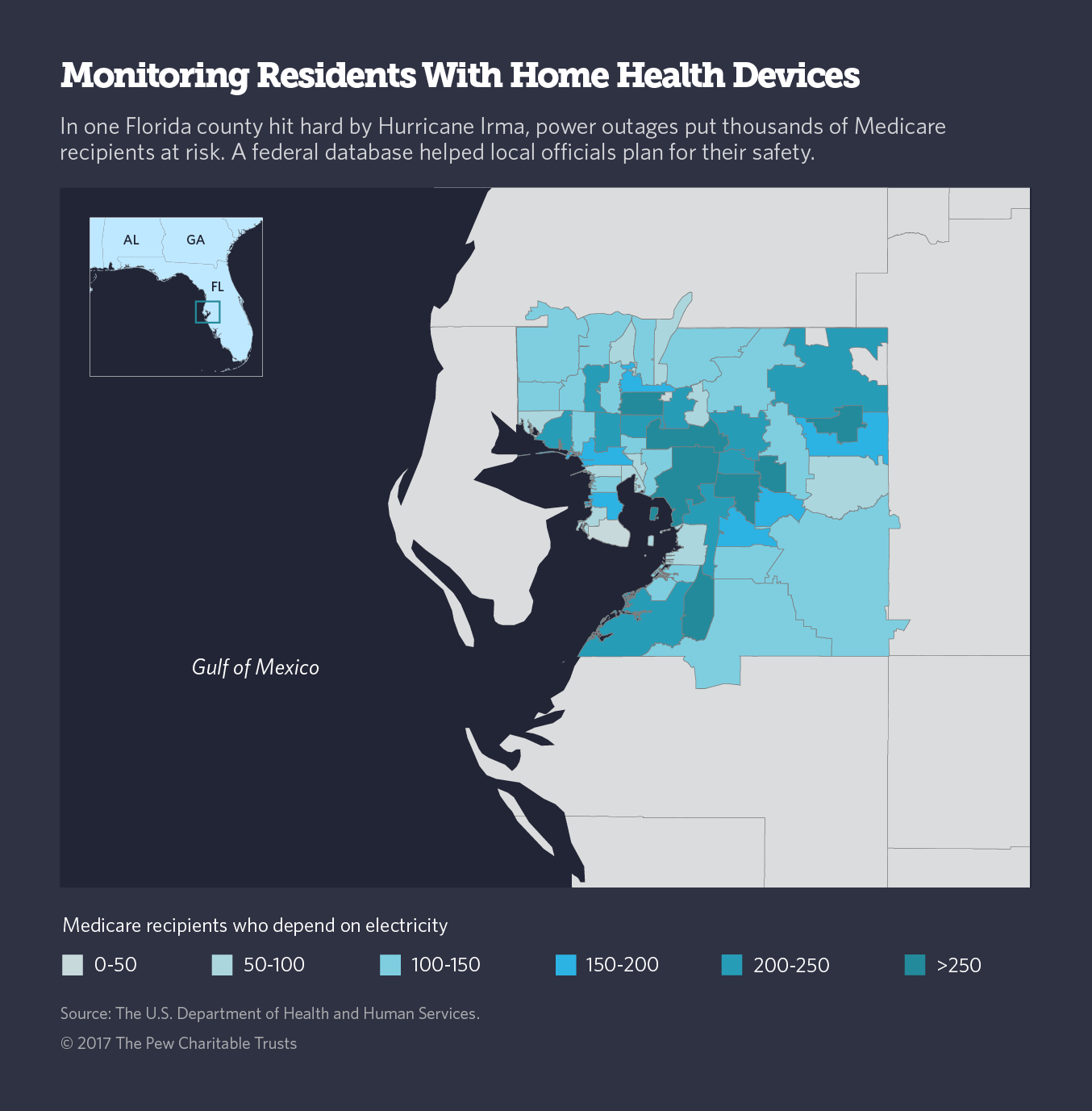 The agency invited everyone on the registry to come to a designated medical shelter at least 24 hours before Irma was projected to make landfall and sent ambulances, vans and school buses to pick up those who needed transportation. And when the wind stopped blowing, the same vehicles returned people to their homes after confirming that the power was back on in their neighborhoods and their homes were safe.

The federal database lists far more Hillsborough County residents with home medical equipment than the voluntary county registry does. But the federal data is difficult to use, Pedigo said. “There’s no way we could check it while people were waiting in line to get into the shelters.”

Because the county’s registry relies on residents to fill out applications and keep them up to date, it is perennially incomplete. At least a thousand additional residents have registered since Irma, Pedigo said, mainly because they didn’t think about it until the storm hit.

People had to stand in line at all three shelters and every shelter was filled to capacity, Pedigo said. But once people reached the check-in desk, administrators found most people’s name on the list and showed them to the cots and medical equipment that had been prepared for them.

Nationwide only a fraction of those who register for special medical needs shelters end up using them. In general, states urge those who do not evacuate before a storm to shelter in their homes as long as they are safe. Some stay with friends or relatives. Others rely on home generators and extra batteries, and some do not lose power.

While Hillsborough and other counties tended to rely on their own registries, Florida’s statewide health agency used emPOWER data as a backstop to ensure that local emergency medical officials in affected counties had reached everyone in need.

In Texas, during Hurricane Harvey, local emergency management officials used a statewide registry to set up medical shelters and contact vulnerable people before and after the storm. According to Lori Upton, regional emergency manager for the Houston area, the statewide database is easier to use and has more of the information local authorities need to set up shelters, although it is far less complete.

But when first responders detected live electrical current running through standing water in a Houston neighborhood, the state used the federal data, which is organized by ZIP code, to quickly contact every person in that neighborhood with an electricity dependent medical device before directing the utility to switch off the power, according to Chris Van Deusen, spokesman for the state health services agency.

HHS said nearly 40,000 health officials and emergency managers have used its Medicare database to identify the best location for shelters and to anticipate how many people with medical devices will need electrical outlets, medications and other supplies.

Electric utilities have used emPOWER to set priorities for power restoration, and hospitals have used the data to estimate how many people may need transportation and care during and after natural disasters.

At a Sept. 20 hearing before a U.S. Senate committee on aging, Karen DeSalvo, former New Orleans health commissioner, recalled going door to door to find people with special medical needs after Hurricane Isaac hit the city, in 2012. She encouraged Congress to provide funding to expand the federal database to include Medicaid and private insurance claims data and to increase awareness of the emergency preparedness tool among local health officials.

“It’s easy to focus on the natural disasters that make headlines and those who seem most frail such as those living in nursing homes,” DeSalvo said.

But major improvements already have been made in preparing hospitals and nursing homes for natural disasters.

Now, DeSalvo said, emergency managers need to focus on disabled and elderly Americans who have chosen to live independently and who are likely to resist evacuation during major storms.