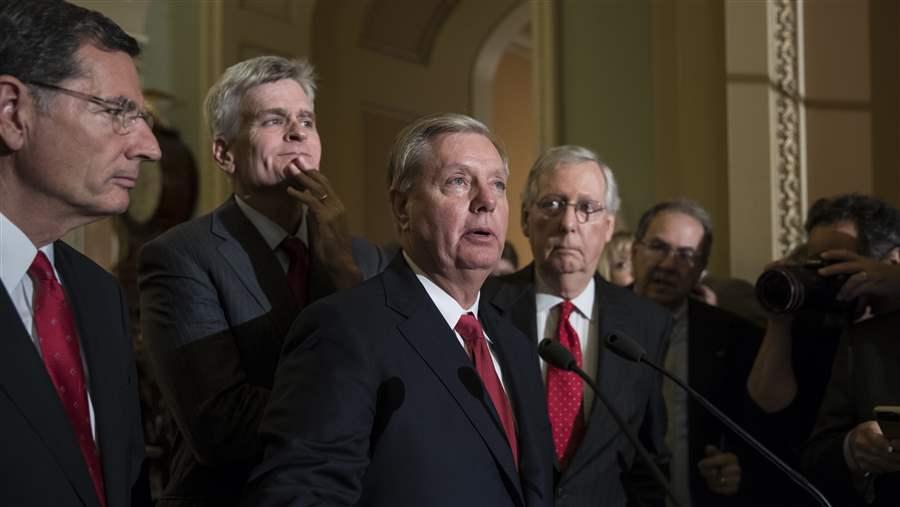 U.S. Sen. Lindsey Graham, a South Carolina Republican, was joined by other GOP senators as he talked to reporters this week. The bill authored by Graham and Louisiana Republican Bill Cassidy would have shifted health policy decisions to the states while sending them much less federal money.

Despite their latest failure to scrap the Affordable Care Act, Republicans have vowed to keep trying. If they fulfill that promise, their future proposals are likely to resemble their past ones in one key respect: They will ask states to remake the health insurance marketplaces within their borders with less federal money to do it.

All the unsuccessful Republican bills sought to give states more authority. That was, in fact, the most recent bill’s chief selling point.

“Under our approach, the money and power in Washington is given to state officials who will be accountable at the ballot box and therefore more accessible than any Washington bureaucrat,” Republican U.S. Sens. Lindsey Graham of South Carolina and Bill Cassidy of Louisiana said after their Graham-Cassidy bill died this week.

But authority is less enticing when it’s accompanied by the cuts in federal dollars that the proposals have entailed, said Mari Cantwell, chief deputy director of the California Department of Health Care Services and director of the state’s Medicaid agency. Under Graham-Cassidy, California would have lost $74 billion between 2020 and 2026.

Nationally the cuts would have reduced federal health funding to the states by $205 billion in that period of time, according to an analysis by Avalere Health, a health policy research company.

“It doesn’t matter how much flexibility you get if you’re losing that much money,” Cantwell said Tuesday, shortly before Republican Senate Majority Leader Mitch McConnell announced there would be no vote on Graham-Cassidy because of Republican defections. “Flexibility like that means deciding which people are going to lose.”

Graham and Cassidy pledged to try again, saying that replacing the Affordable Care Act, often known as Obamacare, is inevitable. “It’s only a question of ‘when,’ ” they said in their joint statement.

Teresa Miller, acting secretary of Pennsylvania’s Department of Human Services, said that statements like that from Republican leaders are the opposite of reassuring. “The problem we need to address is stabilizing the insurance market and the longer this discussion about repealing and replacing goes on, the longer it’s going to take to stabilize.”

Miller said Congress should instead undertake targeted fixes to entice more people into the insurance markets, while President Donald Trump should provide assurances that the federal government will continue to make cost-sharing payments to help low-income Americans afford health insurance. (The administration has threatened to end those payments.)

To some extent, all the Republican proposals, but especially Graham-Cassidy, would have forced states to decide which parts of the Affordable Care Act to retain and which to jettison. Would states keep the individual mandate, which requires all Americans to obtain health insurance? Would they keep the “essential benefits” — the current ACA requirement that all health plans cover 10 specified services, including maternal and newborn care, treatment for mental illness and addiction, and prescription drugs?

Many of those decisions would result in a zero-sum game, with lower premiums for some and higher premiums for others. Various constituencies could find themselves facing off against each other: old vs. young, sick vs. healthy, expectant mothers vs. those with addictions vs. those who need expensive prescription drugs.

“What all these [GOP] bills really do is put the governors in a position of having to make the most difficult decisions any governor would have to make, which is deciding who gets health care and who doesn’t,” Pennsylvania’s Miller said.

In testimony before the Senate health committee this month, Utah’s Republican Gov. Gary Herbert said, “If you will empower Utah to determine more fully its own health care destiny, I promise you that we will provide the other 49 states with proven and scalable solutions for their most complex health care issues. And Utah will learn from and emulate the success of others.”

Some Republican governors hold up the shakeup of welfare in the 1990s, when Congress sent money to states in block grants, as a model for a health care overhaul now.

“Welfare reform passed in the ’90s worked because states were given maximum authority along with adequate funding,” said Brenna Smith, spokeswoman for Iowa Republican Gov. Kim Reynolds, who supported Graham-Cassidy. “The governor believes this model can work for the repeal and replacement of Obamacare. States should be given maximum flexibilities to empower consumers, innovate, lower health care costs and sustain their health care systems.”

Nonetheless, any federal legislation that shifts so many decisions to the states are likely to turn state capitals into political battlegrounds, pitting one constituency against another for access to affordable health care.

In Medicaid, the Republican proposals also would have resulted in winners and losers. Graham-Cassidy, like earlier Republican proposals, would have switched Medicaid to a block grant program, in which the federal government would pay the states a lump sum rather than paying for the actual use of medical services as in the present, open-ended system. Over time, that would mean less federal money flowing to the states.

Unless states could make up that loss with their own money, they would have to either limit enrollment in Medicaid or reduce the services provided or some combination of the two. (A third option would be to pay medical providers less, but providers say the current reimbursement rates are inadequate.)

Unlike the previous Republican bills, Graham-Cassidy would have ended premium tax subsidies in 2026. Those subsidies and federal cost-sharing support help people pay for health insurance on the insurance exchanges. Their elimination would have forced the states to decide if they would try to replace any or all of the $51 billion in federal funding.

Graham-Cassidy, like other Republican bills, also would have eliminated the $931 million federal Prevention and Public Health Fund, which the Centers for Disease Control and Prevention dispenses to state and local health departments for myriad public health purposes, including maintenance of state labs, surveillance and detection of infectious diseases, prevention of lead poisoning, smoking cessation programs, stroke and heart disease prevention efforts, support for child immunization activities, and elimination of health disparities based on race and income.

“States simply don’t have the capacity to fund all of that,” said Edward Ehlinger, Minnesota’s health commissioner. “This is one of the devastating aspects of this bill that is getting lost but is one of the most important.”

The loss of that funding, Ehlinger said, would inevitably force states to choose among their public health priorities, identifying which potential threats to address and which to ignore.

Graham-Cassidy would have given states a two-year deadline for devising their new health plans. “There were four years to get the ACA up and running,” said Chris Sloan, senior manager at Avalere. “And that was a flat-out mess.”

“It’s an extraordinary number of critical decisions that have to be made instantaneously,” said William Hazel Jr., Virginia’s secretary of Health and Human Resources. “In that period of time, you can make a lot of mistakes.”

Still, state officials who fretted about all the work Graham-Cassidy would have entailed do not doubt that a major overhaul could still come their way.