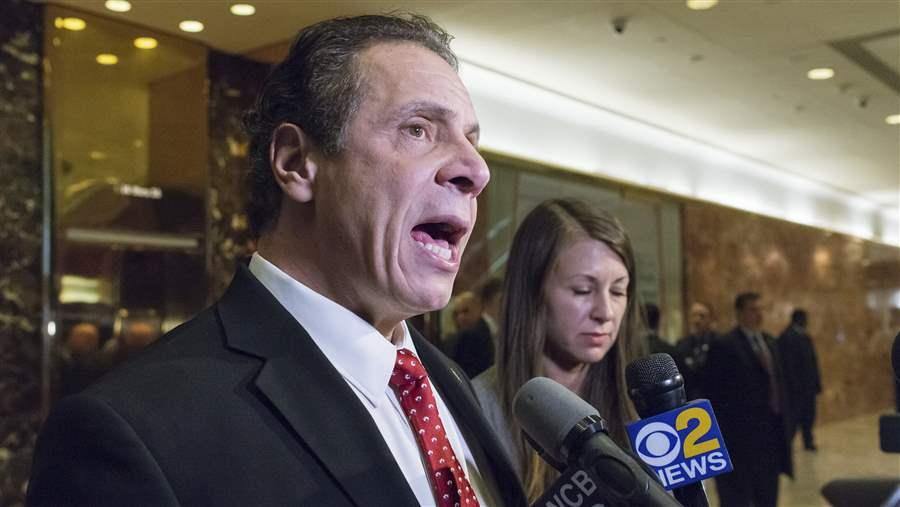 Democratic New York Gov. Andrew Cuomo talks to reporters in January about Republican plans to scrap the state and local tax deduction on federal tax forms. Cuomo says the action would hurt high-tax states like his.

The Republican tax overhaul plan released Wednesday calls for scrapping the federal tax deduction for state and local taxes, and it is already bringing opposition from high-tax states, mostly in the Northeast.

Critics of the deduction say it acts as a federal subsidy to states with higher income and property taxes. But officials in those states worry that without the deduction, which also acts as a subsidy to higher-income residents, they might be pressured to lower taxes overall.

Senate Minority Leader Chuck Schumer, a Democrat from New York, a state that would be dramatically affected by the move, said opposition from lawmakers in high-tax states helped derail previous efforts to eliminate the deduction, and they are prepared to fight against the idea again.

The theory behind allowing the federal deduction for state taxes already paid is to avoid “double taxation” of that income. The 10 counties that benefit the most from the deduction are in California, Connecticut, New Jersey and New York, the Tax Foundation, a right-leaning think tank, found in 2016. They are some of the wealthiest in the nation.

The tax plan, which is being pushed by a small group of Republican senators and backed by President Donald Trump, appears to protect two other items of great interest to states, the tax deductibility of municipal bonds and the low-income housing credit.