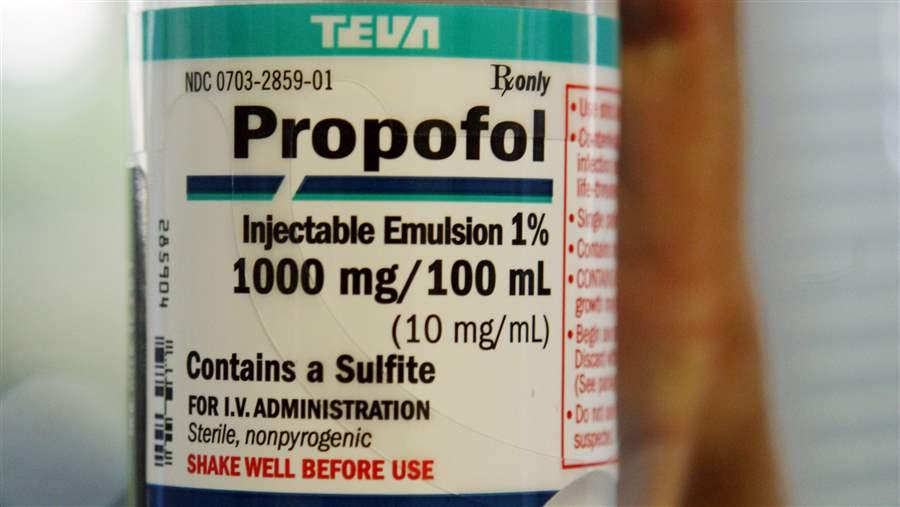 The Food and Drug Administration approved the drug propofol as a sedative used in conjunction with anesthesia for surgeries, but doctors also prescribe it to help control postoperative nausea. This year, Arizona became the first state to allow pharmaceutical companies to promote off-label uses of their products.

When the Food and Drug Administration gives its OK for a new drug to be sold, it specifies the diseases or conditions for which the medicine has been approved. That does not mean doctors can’t prescribe that prescription drug for other diseases and conditions. They do. All the time. And it’s perfectly legal.

But for decades drugmakers couldn’t actively promote the use of their drugs in ways that hadn’t gone through rigorous testing in clinical trials. The FDA, worried about safety issues, has prosecuted numerous drugmakers for illegal promotion of off-label uses and extracted billions of dollars in fines and settlements.

Those restrictions could be giving way, in part due to the appointment of Scott Gottlieb as the new FDA commissioner in May. Prior to his nomination, Gottlieb, a resident fellow at the conservative American Enterprise Institute and a doctor, advocated loosening the restrictions on off-label communications.

And that’s exactly what Arizona did earlier this year when it became the first state to allow drugmakers to communicate directly with doctors and insurers about alternative uses of approved prescription drugs. Advocates for the loosening of the restrictions say they expect similar measures to be introduced in other state legislatures in the coming year.

These developments come on the heels of two legal cases in which federal district courts ruled that the First Amendment does not allow the FDA to prevent manufacturers from providing “truthful” information about their products to doctors.

Supporters say it makes sense to get rid of the restrictions on off-label drugs at a time when plenty of information and misinformation about prescription drugs is readily available to anyone with an internet connection. And, they insist, who better to provide accurate facts about their products than their makers?

“We believe it’s a disservice to patients and physicians to prevent them from getting information from manufacturers who know their medicines best,” said Naomi Lopez Bauman, director of health care policy at the Goldwater Institute, the libertarian think tank that devised the Arizona legislation and is promoting it in other states.

Bauman said she expects bills to be filed elsewhere in the coming year, but she refused to disclose which states Goldwater is targeting.

Many critics, however, remain firmly opposed to such efforts. “There have literally been dozens and dozens of examples of off-label uses of drugs encouraged by pharmaceutical companies in reckless ways that have led to substantial patient morbidity and mortality,” said Aaron Kesselheim, director of the Program on Regulation, Therapeutics and Law at Harvard Medical School.

Before a new drug can be sold in the United States, the FDA must affirm that it is safe and effective for specified uses, which then are incorporated into the new medicine’s labeling. But once a drug is approved, doctors are free to prescribe it for uses not specified in the labeling. That is because the FDA regulates products but not the practice of medicine.

Prescribing for off-label uses has become common. One study found that 30 percent of the prescriptions for oncology drugs were used for off-label purposes. Another found that 70 percent of a popular category of pediatric antipsychotic drugs were prescribed for other purposes not cited in the FDA’s approval of those medicines, including, for example, for the treatment of attention deficit hyperactivity disorder.

Sometimes the off-label use of prescription drugs comes to be considered the best treatment for certain conditions. “For some cancer drugs, the best therapeutic use is for off-label purposes,” said Peter Pitts, president and co-founder of the Center for Medicine in the Public Interest, a nonprofit involved in health policy research and advocacy that is funded by the pharmaceutical industry.

One example is the class of tricyclic antidepressants, which do not have FDA approval as treatment for nerve-related pain, yet are considered by doctors to be the first choice of drugs for that purpose.

Nevertheless, a recent study published in the Journal of the American Medical Association found a higher incidence of adverse drug effects from off-label use compared with on-label use.

Pitts does not think the FDA should prohibit drugmakers from dispensing information that might be relevant to those off-label uses. “In fact, it’s almost irresponsible not to let them dispense that information as long as it’s truthful, accurate and not misleading,” he said.

Pitts and others say it is unreasonable to expect drug manufacturers to embark on additional clinical trials to demonstrate the safety and efficacy of already approved drugs for new purposes. That process, like the original process, could cost drugmakers hundreds of millions of dollars in new testing and take additional years before getting FDA approval.

“If your drug is approved for X, why would you ever commit millions in additional testing to get approval for Y, when it’s already legal to use it for Y?” Pitts said.

The answer, according to opponents of loosening the restrictions, is public safety. If the FDA didn’t approve a drug for off-label uses, they say, that means the drugmaker hasn’t produced evidence to demonstrate the drug is safe and effective for those other uses.

“If you take it as your premise that an objective approval by someone with no financial interest is necessary to protect patients, then marketing a drug for unapproved uses is the same as marketing an unapproved drug,” said Allison Zieve, director of the litigation group at Public Citizen, a consumer watchdog group that opposes loosening the communication restrictions. To allow drugmakers to do so, she said, would undermine the whole system of FDA drug approval.

Zieve and other opponents point out that the limitations do not prevent the manufacturers from sharing peer-reviewed, scientific articles about off-label uses of their drugs with doctors and others. They just can’t promote off-label use in their marketing.

The Goldwater Institute, named for Barry Goldwater, a onetime U.S. senator from Arizona and the 1964 Republican presidential nominee, wrote the model law upon which the Arizona legislation was based. “It just seemed to me that this was a way to give physicians more information to help them treat their patients,” said state Rep. Phil Lovas, a Republican, who sponsored the bill.

The pharmaceutical industry did not formally lobby on behalf of the bill, although it has called for a revision in the FDA policies on communications about off-label uses.

Some critics say the Arizona law is meaningless because states cannot pre-empt federal law, and they don’t believe pharmaceutical companies will feel free to promote off-label uses unless given more direction from either the FDA, Congress or higher courts.

But the Goldwater Institute insists the federal law prohibiting drugmakers from promoting off-label use is unconstitutional. The group points to two recent federal court rulings in New York, one in 2012 and the other in 2015, in which courts found the FDA restriction violated the free speech provisions of the First Amendment.

Goldwater also was behind another recent issue involving prescription drugs, the so-called right-to-try laws that give desperately ill patients the opportunity to receive promising experimental drugs that do not yet have FDA approval. Since 2014, 37 states adopted right-to-try legislation, although critics too said at the time that those laws didn’t supersede federal law, which sharply restricts the dissemination of experimental drugs.

But the state laws did create momentum, which may have contributed to passage of a right-to-try bill in the U.S. Senate this summer. “I firmly believe state activity with right-to-try pushed it forward at the federal level,” said Lovas, who left the Arizona Legislature in the spring to take a position in the Trump administration. “I’d like to see the same thing happen with this.”

It might. U.S. Reps. Morgan Griffith of Virginia and Brett Guthrie of Kentucky, both Republicans, filed separate bills this spring to ease the flow of information on off-label drugs. The House held a hearing on the bills in July, but has taken no action since.