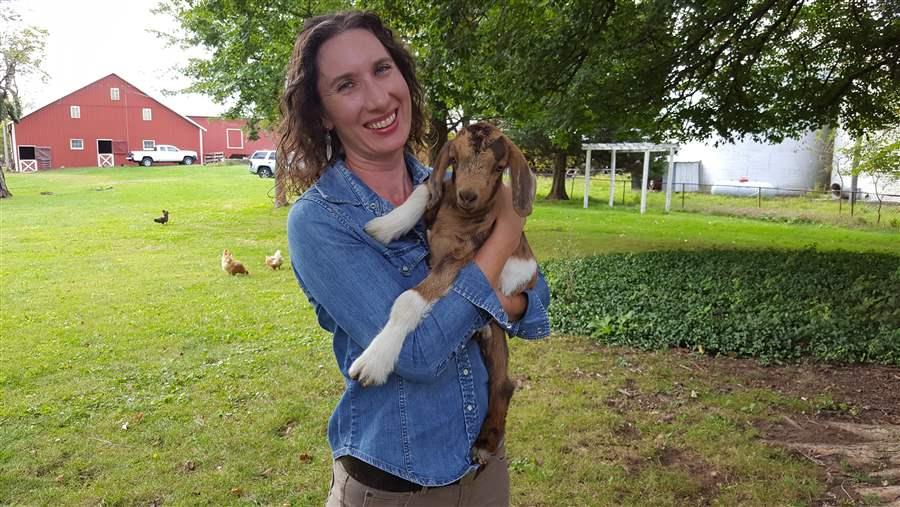 Editor's Note: This story was updated 9/21/2017 to correct the name of the Lincoln Institute of Land Policy.

NEW BAVARIA, Ohio — Tony Giesige proudly points to the corn and beans growing on the northwest Ohio land that has been in his family for three generations. He shows off his tax bills too, but those are a source of pain rather than pride.

Giesige’s agricultural property tax bill was $311 in 2005. By 2011 it was up to $1,731. And by 2014 it had reached $3,871, while at the same time, crop prices declined. “The way it was all factored in, the last two years the prices have gone down quite a bit and the taxes are still there,” he said, holding a sheaf of bills with calculations written in pencil in the margins.

His total tax bill for fiscal 2017 was $11,815, he said, including 180 acres of lush green and gold fields of corn and soybeans, and his modest home. The taxes on the house, $711 this year, have actually declined, because Giesige, 68, is now eligible for a senior citizens’ homestead tax exemption.

Giesige is far from alone. Across the U.S., farmers have complained for years that tax formulas meant to protect rural land from development have failed to keep up with property values, commodity prices and other economic conditions. Now they are getting some relief.

This year, Giesige and other farmers in Ohio persuaded the Legislature and Gov. John Kasich, a Republican, to make changes to the formula used to calculate taxes on agricultural land. The Farm Bureau expects the changes — which were part of the state’s operating budget and take effect in the next land reassessments — to lower farmers’ property tax bills by almost a third. 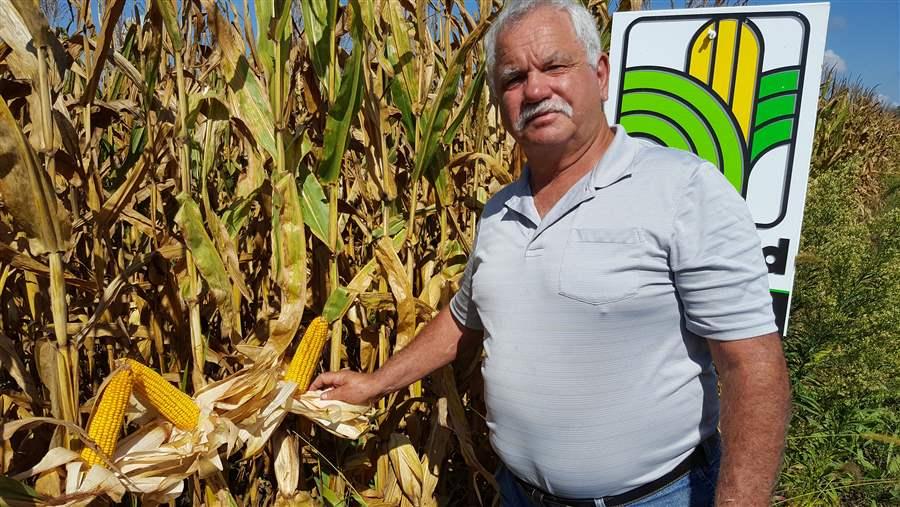 Tony Giesige, whose family has farmed in Ohio for three generations, grows corn and soy beans. A rapid increase in Ohio’s farmland property tax threatened farmers like him, leading the state to act.

In Minnesota, Gov. Mark Dayton, a Democrat, signed a tax relief bill that included a tax credit for 40 percent of the local school taxes on agricultural properties.

Last year, then-Indiana Gov. Mike Pence, a Republican, signed a bill that made changes in the agricultural property tax similar to Ohio’s. Some Texas lawmakers raised the issue this year but were unsuccessful in getting changes. They said they will try again in the next session.

Carolyn Orr, agricultural policy analyst and executive secretary of the State Agriculture and Rural Leaders, a trade and research group, said farmers’ tax bills have skyrocketed because states use formulas based on a rolling average of commodity prices, crop yields and other factors.

“In the Midwest over the last 36 months, the crescendo finally got loud enough,” Orr said, noting that her Indiana farm has been hit too. “It now takes about $50 just to pay the taxes for the land a cow grazes. That’s more than I make on her calf." 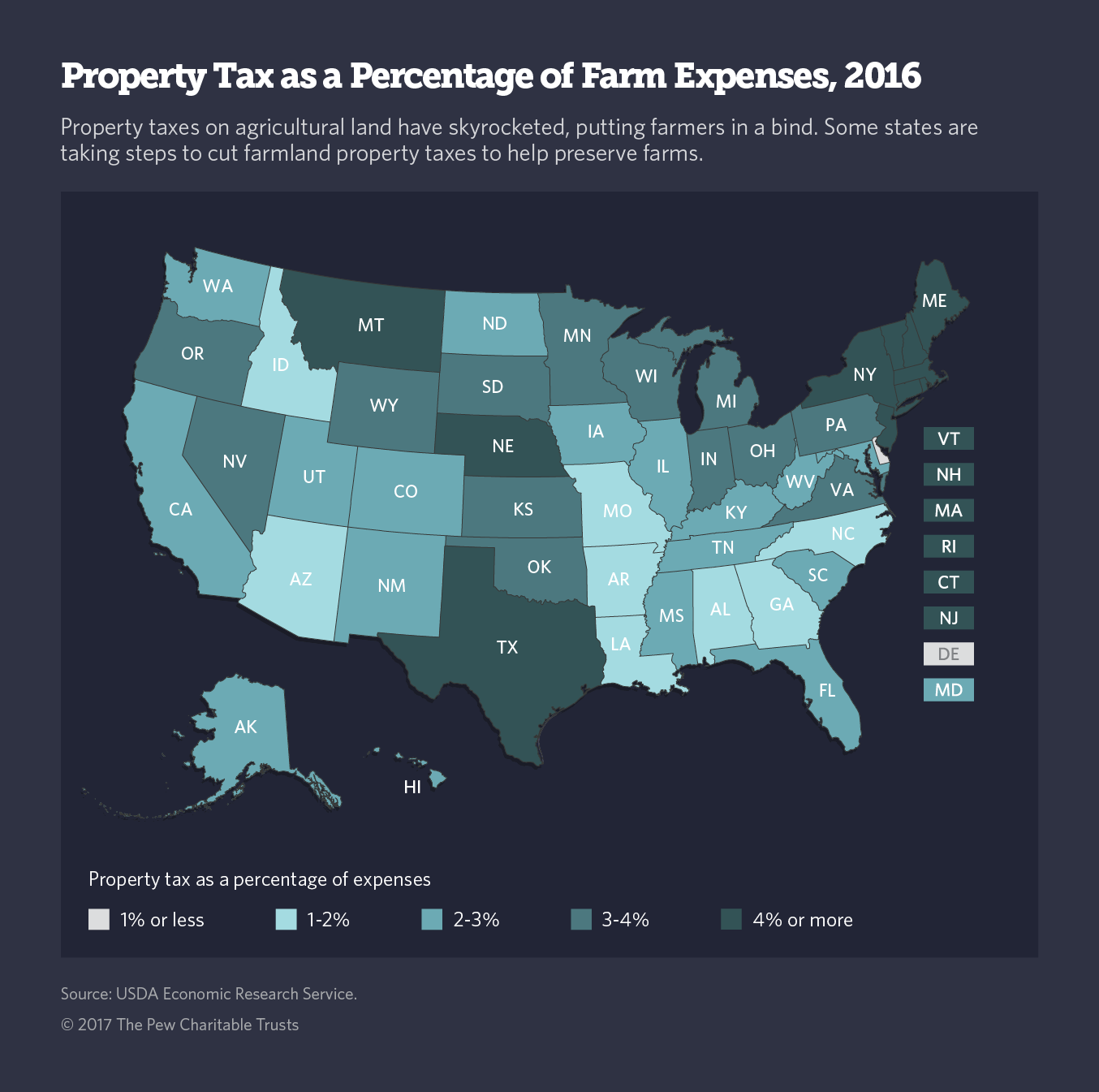 Agricultural land is assessed differently than homes and business in all 50 states, based on a formula that values the land based on crop yields, soil conditions, market prices and other factors. The approach is designed to preserve agricultural land by curbing property taxes, even as developers gobble up farmland and land values skyrocket.

But over time, changing interest rates and swings in grain prices have led to assessments that don’t match the economic conditions many farmers face.

In Ohio, the formula hadn’t been changed since the early 1970s, according to Leah Curtis, an attorney at the Ohio Farm Bureau, and resulted in a 300 percent jump in agricultural property taxes between 2008 and 2014.

Ohio state Rep. Brian Hill, a Republican who raises beef cattle, corn and soybeans in Zanesville, said lawmakers asked the tax department to change the formula several years ago, but they got nowhere, so he and others pushed the Legislature to act. Their effort failed last year, but a change to the formula was folded into this year’s state budget and passed.

The changes, to be phased in from 2018 to 2022, are intended to tie farmers’ taxes to their farming income. They also aim to give farmers a break on taxes they have had to pay for land they cannot use because of conservation practices that protect water quality.

But for every farmer who breathes a sigh of tax relief, there are other property owners and taxpayers who say they have to pick up the slack.

The Ohio Legislative Service Commission estimates the changes could cost school districts about $14 million by 2022, when they are fully phased in.

Hill acknowledged that agricultural counties might feel the effects of the reduction more than others, and that there will be “cost shifting” to homes and businesses in other counties. But, he said, when homeowners see their tax bill increase, farmers do too. The farmland formula applies only to land, not to homes, barns or other structures.

Close to the City

Katherine Harrison, who raises goats, chickens, sheep and a little corn on her 76-acre farm just a half an hour’s drive from Columbus, was among the farmers who asked Ohio lawmakers for tax relief.

Being close to the city is a blessing and a curse for the 40-year-old. It allows her to have a side job in event planning and to host gatherings for city dwellers — “goat yoga” is a current favorite. She also sells goat meat to members of the Middle Eastern and African communities in the city.

But urban sprawl could pose a threat to her farm and to the free-range chickens who wander into the two-lane road nearby.

Harrison, whose ancestors farmed near the James River in Virginia as early as 1631, could sell to developers like those who set up a warehouse within shouting distance of the place. The taxes are so high that she doesn’t make enough to pay them, let alone make a profit, she said.

“The formula was no longer effective,” she said, sitting on the porch, overlooking the chickens as they roamed the yard and a classic red barn filled with goats and sheep. “I can go to the Statehouse,” she said of her visits with lawmakers. “But I’d much rather be here snuggling goats.”

While farmers fret about the cost of the property tax assessments, they faced bad publicity and little sympathy when investigations in some states turned up “fake farmers” who declare their property is a “farm” but in reality it’s more like a side yard with a goat or two in it.

The Lincoln Institute of Land Policy, a research organization that studies property taxes, concluded in a 2014 book, “Use-Value Assessment of Rural Land in the United States,” that the valuations for farmland had been “modestly successful” in protecting rural land from development.

But the book also cited abuses, saying that “fake farmers” enjoy low property tax bills while using the land to sell firewood or Christmas trees to a few friends and neighbors.

Part of Ohio’s and other states’ reforms are aimed at weeding out the fakers.

The Ohio Farm Bureau’s Curtis said county auditors are required to visit the farms and farmers are required to re-apply for the special agricultural property tax every year. “There are going to be people who abuse the system, sure, there are always people. But our qualifications are good and our auditors do a good job of protecting their tax base.”