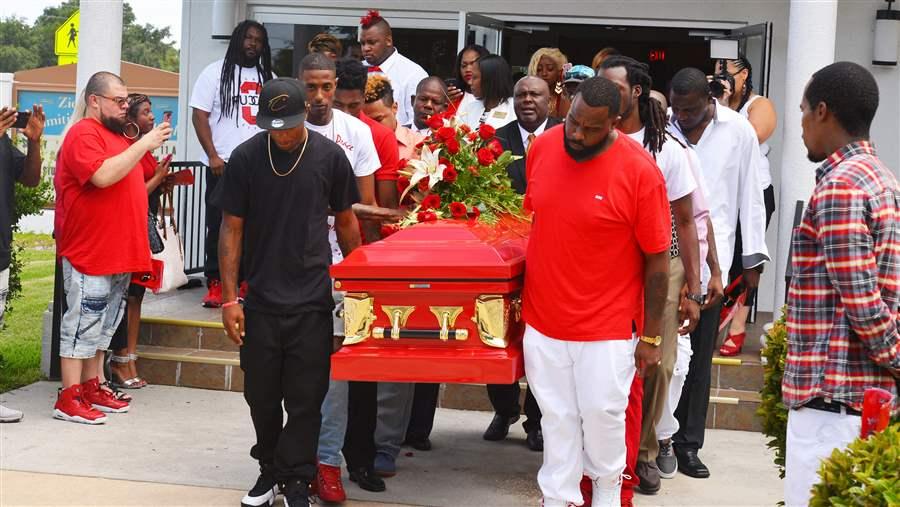 Thousands attended a funeral for Jamel Dunn, a Florida man who drowned in a pond while teens recorded and mocked him. Lawmakers in Florida and Arizona now want to make it illegal to not try to help someone in an emergency.

In the video, Jamel Dunn can be seen flailing in the middle of a Florida pond, his head sinking deeper in the water with every gasping breath. In the background, teenagers are laughing and mocking him.

Months after the July episode, which was posted online and seen by millions, the teens have faced public outrage, but no legal action. While many agree that what they did was immoral, it wasn’t illegal — and not everyone thinks it should be.

There is no law in Florida — or in most states — that requires someone to act when they see someone else in grave danger. There is no duty to attempt a rescue, or even to call for help.

That’s unconscionable for many who watched Dunn’s drowning, including lawmakers in Arizona and Florida who are now drafting proposals that would make it illegal to sit idly by if you see someone in grave danger. The laws would impose either a duty to rescue or duty to call 911 or otherwise alert authorities during emergencies.

Only a handful of states have similar, broad “bad Samaritan laws,” which apply to any bystander who witnesses an emergency or crime. Supporters such as Ken Levy, a law professor at Louisiana State University, say the laws save lives and help ensure that people who don’t act are punished.

“Part of it is symbolic,” he said, “showing that we value human life and we will save it when we can.”

But libertarians oppose the laws, and some legal experts argue they may not be effective. David Hyman, a law professor at Georgetown University, and Eugene Volokh, a law professor at UCLA, say the laws aren’t likely to change the behavior of people who witness emergencies and, if they do, the consequences of having a law in place would outweigh the benefits.

Imposing a duty to rescue, Hyman said, may actually make situations more deadly by compelling people to act in often perilous circumstances. And the laws may actually make it less likely that people who witness criminal acts cooperate with police, Volokh said. If a witness knows the law requires them to immediately report what they see, and they don’t, they may be less likely to come forward later out of fear that they will be prosecuted.

‘Rescue is the Rule’

Three states — Minnesota, Rhode Island and Vermont — impose a broad duty to rescue others in an emergency, and three others —Hawaii, Washington and Wisconsin — impose a broad duty to report crimes to authorities. Other states have similar laws, but they’re more specific, and apply only to medical professionals or people who witness certain criminal acts such as child abuse.

People are rarely, if ever, prosecuted or sued for breaking these laws, said Christopher Roberts, an associate law professor at the University of Minnesota.

This is partly because there are so few instances in which people see someone in an emergency and have the ability to help, but choose not to, Hyman said. He researched emergencies across the U.S. over a 10-year period, from 1994 to 2004, and identified one or two “non rescues” a year on average, compared to about 263 rescues in risky situations and about a thousand non-risky rescues. “Rescue is the rule, even if it isn’t the law,” he said.

Hyman acknowledges that there are probably many cases of non-rescue that are never reported — another reason why these cases don’t often see their day in court. “In a typical situation,” Volokh said, “they don’t post a video — they just remain mum.”

That might change, though, as more people record emergencies on their smartphones and post them online. The videos will make it easier for police to prosecute people for failing to act, Hyman said.

Prosecuting people under the current duty to rescue laws is difficult, according to opponents. It’s also hard to define who laws apply to, and when.

The current duty-to-rescue laws only require a person to attempt a rescue if it wouldn’t put the person in danger. But it’s hard to prove that someone knew about the emergency and should have acted, Levy said.

“If someone says you were in a situation where you could have helped someone and you didn’t, they will say ‘That’s not the case. I was afraid for my life and here is why,’ ” Levy said.

Levy supports both duty to rescue and duty to report laws. But he says that it’s easier to enact laws that establish only a duty to report. That’s the kind of bill Arizona state Sen. John Kavanagh, a Republican, said he plans to introduce.

The first major debate about duty to rescue laws took place after the infamous murder of Kitty Genovese in 1964. While the details of the story have since been called into question, dozens of people were said to have watched for more than half an hour as the New York woman was stalked and attacked, without anyone alerting the authorities.

In Florida, residents are circulating petitions that call for a bad Samaritan law, and have collected thousands of signatures. Florida state Sen. Debbie Mayfield, a Republican, said she is working on drafting a bill with the support of local law enforcement.

Hyman said he doesn’t think laws should be built upon anecdotes. But others, such as Roberts in Minnesota, said even if it’s rare for someone to decline to help someone in distress, there should be some way to hold accountable those who fail to do so.

He said he asks his students to consider a situation in which someone sees a baby fall face down in a fountain in two inches of water, and just watches the baby die. Having no way to punish something so immoral doesn’t sit well with him — or most of his students, he said.