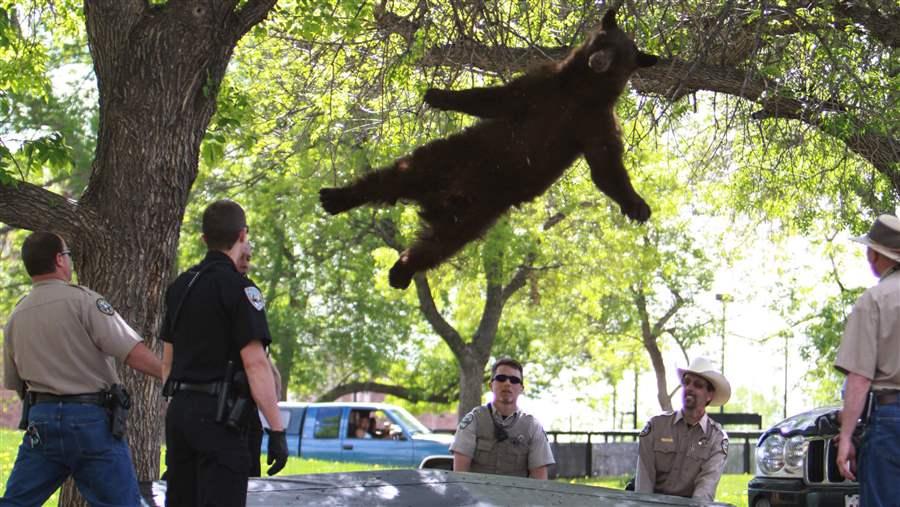 A bear falls from a tree after being tranquilized by Colorado wildlife officials on the University of Colorado, Boulder campus. Boulder recently adopted a bear-resistant trash can ordinance.

BOULDER, Colo. — On a recent morning that was chilly with the first nip of fall, Brenda Lee went looking for knocked-over trash cans. She drove her car slowly through alleyways on the west side of this Colorado city, close to where streets end and the Rocky Mountains begin. The damage wasn’t hard to find.

On every block, it seemed, at least one trash can was lying on its side, spewing its contents into the street. The mess was a telltale sign that a black bear had toppled the can and clawed through the garbage looking for scraps.

Conflicts between humans and bears are increasing here and across the Western U.S. as more people move to and vacation in bear country. Climate change could make the situation worse by disrupting bear habitat.

In towns from Arizona to Washington, hungry bears regularly wander off public lands and onto school playgrounds, break into cars and climb through open kitchen windows. Occasionally, they attack. In the Boulder area this summer, a bear clenched its jaws around the head of a teenage summer camp staffer as the boy slept outside. He fought off the bear and survived.

State wildlife managers say they spend most of their summer and fall responding to people’s frantic calls about bears. Officials say the best way to address the problem is to make sure people store curbside trash in containers bear paws can’t open. “People still have not learned to do the right thing in bear habitat,” said Carl Lackey, a biologist for the Nevada Wildlife Department.

City and county leaders are increasingly taking action and approving ordinances that require residents to use bear-resistant trash cans. Colorado Springs is considering such an ordinance. Durango, Colorado, which grappled with a large influx of bears this summer, adopted an emergency ordinance last week that increases the fines homeowners pay if they fail to lock up their trash.

Even in places with a strong ordinance, such as Boulder, not all citizens obey the law.

“This is where the momma and the cub were last Saturday,” Lee said, stopping her car and getting out. She was frustrated. As the head of the Boulder Bear Coalition, a volunteer-run nonprofit, she pushed for the city’s bear-resistant trash can ordinance. Yet a year after it went into effect, some neighborhoods still offer bears an all-you-can-eat buffet.

There were about 600 bear incidents a year in the mid-1990s, according to Colorado’s Parks and Wildlife Department, but that increased to about 1,050 in 2010 — numbers that likely don’t reflect the full total, as some people report conflicts to local animal rights groups, local police and local wildlife officials, and not all those complaints make it into the state tally.

Colorado state Rep. Yeulin Willett, a Republican, said there’s a simple reason why more people in his western Colorado district are reporting bears on their property these days. “The population of bears is way up in my district, and it appears to be way up across the state.”

Willett has twice proposed legislation that would extend Colorado’s bear hunting season. Ideally, he said, he’d reintroduce bear hunting with dogs, a practice state voters banned in 1992. When bears are hunted with dogs, Willett said, they learn to fear pet dogs and will steer clear of towns as a result.

State officials and wildlife researchers say the problem — and the solution — isn’t so simple.

In many of the 40 states where black bears are found, including Nevada, California, Maine, Florida and Louisiana, officials have reported growing bear populations. But in Colorado, experts caution that the state’s bear count is a rough estimate, and it’s not clear if there are more bears around than there used to be.

Wildlife managers do typically expand hunting in order to control bear populations. But studies suggest more action is needed to limit conflict between bears and people. “Data from Virginia, Pennsylvania, New York and Ontario (Canada) all demonstrated an increase in bear nuisance complaints despite increases in the number of bears harvested,” cautioned a 2015 Colorado Parks and Wildlife study mandated by a law Willett co-sponsored.

Bear population numbers may be fuzzy, but the human population trend is clear. “The challenge is, really, that now people are living in places where bears used to roam,” said Stacy Lischka, a social scientist who has studied the interaction between bears and humans for Colorado’s wildlife agency.

Bears are more likely to approach campgrounds, towns and cities when they can’t find food in the wild. Many parts of Colorado are seeing above-average numbers of bear visits this year because a late frost led to fewer berries and acorns, which bears rely on.

Bears can consume up to 20,000 calories a day as they prepare to hibernate. Trash, birdseed, backyard fruit trees and farm animals such as goats can help them pack on the pounds they need.

Getting ordinances adopted isn’t easy. They can be opposed by waste hauling companies, which have to adapt their dump trucks to a different kind of container. Or by residents who don’t want to pick up the tab for special containers that can cost $200 or more.

In Boulder, the strongest political pressure for an ordinance came from animal lovers like Boulder Bear Coalition’s Lee. When the state euthanized four bears in the area in 2013, residents were appalled.

“In our community, killing the bears was not acceptable,” said Val Matheson, the city’s urban wildlife conservation coordinator. The 2014 ordinance requires people who manage or live in property close to the mountains to use bear-resistant containers for their curbside garbage and compost.

Two of the three waste-hauling companies in town require residents to buy a trash can, while the third leases cans of its own design.

When Lischka worked for the state wildlife agency, she helped conduct a six-year study led by Heather Johnson, a biologist, on human and bear interaction. In a forthcoming paper, the researchers will show that storing trash can dramatically decrease the conflict between humans and bears.

The key challenge was getting people to use the bear-resistant cans. Initially, fewer than half of the people who had them used them properly, Lischka said. Bear visits only dropped significantly when 60 percent of people kept their garbage locked up.

The finding was good news for municipalities, because it suggested that partial compliance can make a difference — at least in the average year. When there’s a catastrophic natural food failure and bears are desperate, Lischka said, 60 percent may not be good enough.

The study also confirmed that it’s very risky for bears to enter human developments. The researchers documented a dramatic drop in the bear population during a bad food year, as bears that ventured into urban areas were struck and killed by vehicles or euthanized by state officials who judged them to be a public safety threat.

But enforcing an ordinance can be tricky for city governments that are hard-pressed for time and manpower to search alleyways for knocked-over trash cans and issue fines. In Boulder, Lee and other volunteers help out code enforcement officers by reporting violations they see using a city app.

Some Nevada counties have bear-resistant trash can ordinances but they don’t achieve much, Lackey said. “It’s very difficult to enforce them.” Typically, communities rely on neighbors reporting neighbors.

It can be particularly hard to get short-term residents to take action. Some mountain communities, such as the resort town of Aspen, struggle to stop tourists from feeding bears. Many violent encounters between humans and bears involve homeless people sleeping outdoors surrounded by their possessions, including food.

And no matter how well-written and tightly enforced a municipal trash ordinance is, there are still other food sources in town that attract bears.

People also need to keep their livestock safe behind electric fencing, only put out birdfeeders in winter, and lock their first-floor windows to prevent bears from getting in — all human behaviors that are hard to change.

Bryan Peterson, head of Bear Smart Durango, a nonprofit that focuses on bear issues, says he didn’t think when he founded the organization over a decade ago that he’d still be pushing for change a decade later. “We’ve had wildlife ordinances here for ten years, yet the bear issue continues to get worse,” he said.