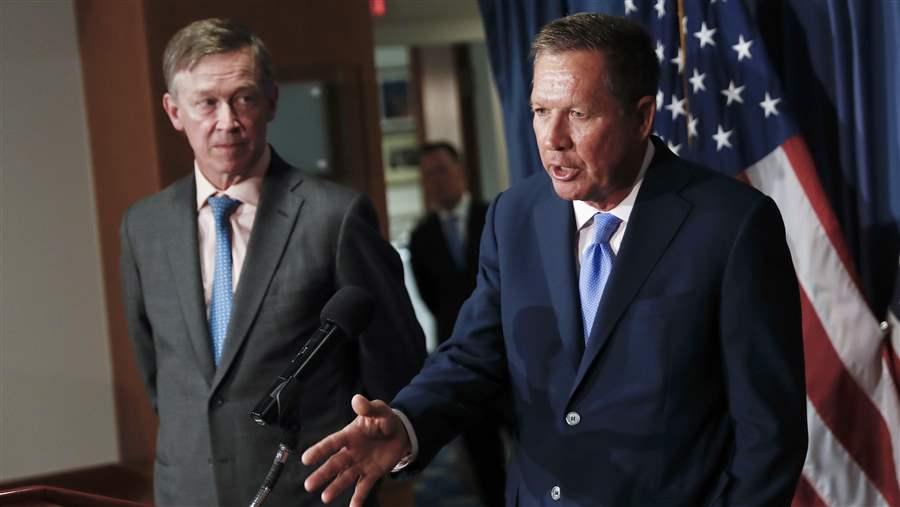 Govs. John Hickenlooper of Colorado (left) and John Kasich of Ohio discuss health care reforms in Washington in June. They are among a bipartisan group of eight governors who have made proposals for strengthening the nation’s health insurance system.

The Affordable Care Act’s requirement that Americans either carry health insurance or pay a fine remains the law’s most unpopular feature. Nevertheless, a bipartisan group of governors is insisting that the so-called individual mandate remain in place — at least for now.

In a letter sent late last month, the governors urged federal lawmakers to retain the mandate to help stabilize insurance markets. But the group, which is led by Republican John Kasich of Ohio and Democrat John Hickenlooper of Colorado, also said states should be given the opportunity to devise “a workable alternative” to it, subject to federal approval.

Earlier this week, Republican U.S. Sens. Lindsey Graham of South Carolina and Bill Cassidy of Louisiana proposed a repeal of the ACA that would eliminate the federal mandate. Instead, their plan would leave it up to states to preserve, revise or dump the requirement.

In its early days, the Trump administration signaled it would not penalize people for not having health insurance. The IRS said it did collect penalties this year, although prior to the filing deadline, it announced that it would accept returns from those who didn’t provide the requested information on insurance coverage. The current penalty is either 2.5 percent of household adjusted gross income, or $695 for an adult and $347.50 for a child, whichever is greater. The maximum penalty is $2,085 for a household.

Health policy analysts say the Trump administration’s threat to withhold ACA funding has unsettled insurance companies and destabilized health insurance markets. That is one reason the governors’ group favors keeping and enforcing the mandate for now.

Many critics of the mandate object to it on philosophical grounds, noting that it obliges Americans to purchase a product whether they want it or not. Supporters argue that short of universal health insurance, the mandate is the best way to draw everyone — including young and healthy people who presumably will pay more in premiums than they collect in claims — into the insurance pool, thereby making coverage affordable for everybody else.

Several insurers have abandoned markets in parts of the country this year, complaining that too few young and healthy people were enrolling. As a result, the insurers said, they were paying more in claims than they were collecting in premiums. In some areas, the companies sought steep premium increases for next year, bringing protest from many policyholders.

Getting rid of the mandate now might convince even more young and healthy people to forgo insurance, further destabilizing markets and perhaps chasing some insurers out of them, said Greg Moody, director of Kasich’s Office of Health Transformation.

“You can’t replace it now without the whole market falling apart around us,” Moody said.

Once the market is stable, Moody said, states with Democrats in power might try to strengthen the mandate by increasing penalties for non-compliance or strengthening enforcement. More likely, aides to Democratic governors say, those states might not change the mandate at all and instead revise other elements of the law, such as establishing reinsurance pools to help insurers to remain financially solvent.

States with Republicans in control might move to replace the mandate with something other than a direct financial penalty. Since the ACA was enacted in 2010, Republicans and some right-leaning think tanks have floated ideas for other approaches that would encourage Americans to enroll in health insurance without levying fines on them. Some of these ideas were incorporated in Republican repeal-and-replace proposals that failed to win congressional support in the spring and summer.

Under most of these alternatives, people who opted out of health insurance and then changed their minds would have to wait until they could obtain coverage, pay premium surcharges, or go without coverage for medical conditions they developed while uninsured.

JoAnn Volk, a senior research professor at Georgetown University’s Center on Health Insurance Reforms, said that each of those alternatives are intended to do what the mandate does now — get as many people into the health insurance marketplace as possible — while at least nominally suggesting that consumers have a choice.

“If you get rid of the mandate, you still need some very strong incentive to get healthy people to buy coverage now and not when they get sick,” Volk said.

The insurance industry, which largely supports the mandate, has stayed out of the debate for the most part, except to note that “well designed” alternatives could be acceptable, presumably if they drew in at least as many enrollees as the mandate.

Health policy analysts say the mandate, in combination with other ACA provisions, has helped reduce the U.S. uninsured rate, from 13.3 percent before the law was implemented to 8.8 percent now. Among the so-called young invincibles, 18- to 35-year-olds who tend to use less medical care, the rate has dropped from 25.2 to 14.6 percent.

According to the IRS, 85 percent of taxpayers indicated that they had health coverage in 2016. About 6.5 million people paid $3 billion in penalties for not having insurance, an average payment of about $470.

The federal government does not seek payment from taxpayers who do not have refunds coming, and it does not have the capacity to attach liens on homes or garnish wages, although it can obtain payments in future years if the taxpayer does qualify for a refund then.

Conservatives, like the Heritage Foundation’s Edmund Haislmaier, and libertarians, like Michael Cannon of the Cato Institute, prefer alternatives that would allow consumers to choose whether to purchase health insurance. They also would open the door to allowing insurers to charge some people more for their pre-existing conditions.

But other health care analysts, including Volk and Sarah Lueck, a senior policy analyst at the left-leaning Center on Budget and Policy Priorities, say none of the alternatives would induce as many people to buy insurance as the mandate does now, and they all would lead to higher premiums. A recent analysis by the Congressional Budget Office confirmed those fears.

State Democratic officials largely agree the alternatives would lead to higher premiums, but they are willing to allow Republican governors to devise solutions that could work in their states.

And that’s exactly the point, Ohio’s Moody said. A state like Ohio, where premiums have not increased sharply, might be able to replace the mandate without the negative consequences of higher premiums. That might not work in other places.

Still, as Lueck says, no one has convinced her that any alternative will work as well as the mandate.

“We’ve learned in the first few years of law that the individual mandate is the most effective tool that we have,” Lueck said.

And, she said, there would be a human cost to the alternative methods. “It hits at people who are sick and made a miscalculation or were just confused by the paperwork.”

Top State Stories 9/15 Would You Know if Your State Was in a Recession?
RELATED
Topics
Health
Places
United States Colorado Ohio