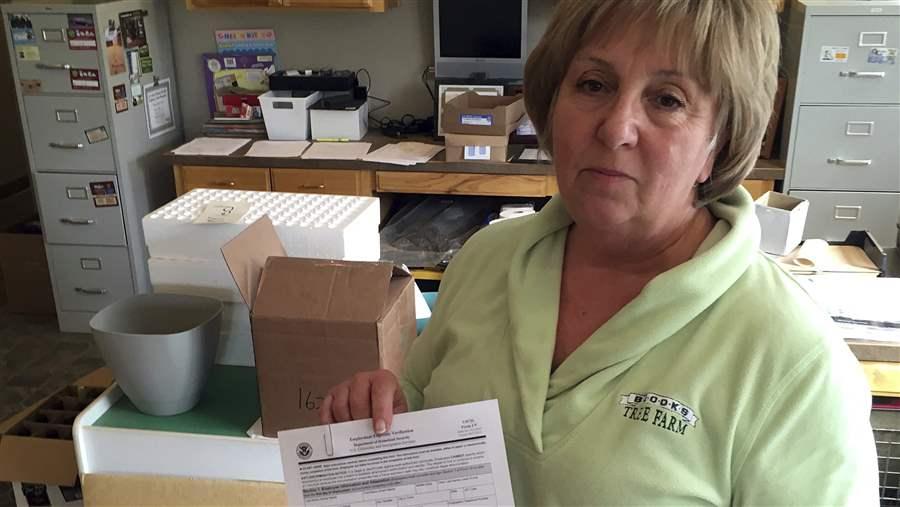 Kathy LeCompte, owner of an Oregon farm, shows a form employees must fill out verifying their employment eligibility. Only nine states now require verification of the forms through E-Verify for all hires, but a national mandate could be in the works.

Only a handful of states require all employers to screen workers to make sure they are in the country legally, but that could change soon.

Spurred by the Trump administration’s crackdown on illegal immigration, Congress is set to debate a national E-Verify mandate that would require every U.S. employer to use the federal online service to screen all new hires and for the first time allow the screening of current employees.

Seven states in the South (Alabama, Georgia, Louisiana, Mississippi, North Carolina, South Carolina and Tennessee) and two in the West (Arizona and Utah) already require private employers to use E-Verify. But enforcement has been inconsistent, largely because state officials can’t access E-Verify records to make sure employers are checking new hires. Advocates for the system say a federal mandate likely would boost compliance across the country.

“It’s cumbersome for states to know whether employers are actually complying,” said Madeline Zavodny, an economics professor at Georgia’s Agnes Scott College who has studied the issue.

Employers in states that mandate the use of E-Verify are more likely to screen applicants. Between October 2016 and June 2017, 70 percent of all hires in the South were screened with E-Verify, compared to only 39 percent in the Northeast, where no states require E-Verify, according to a Stateline analysis of screening data from E-Verify and federal hiring data for the same period. 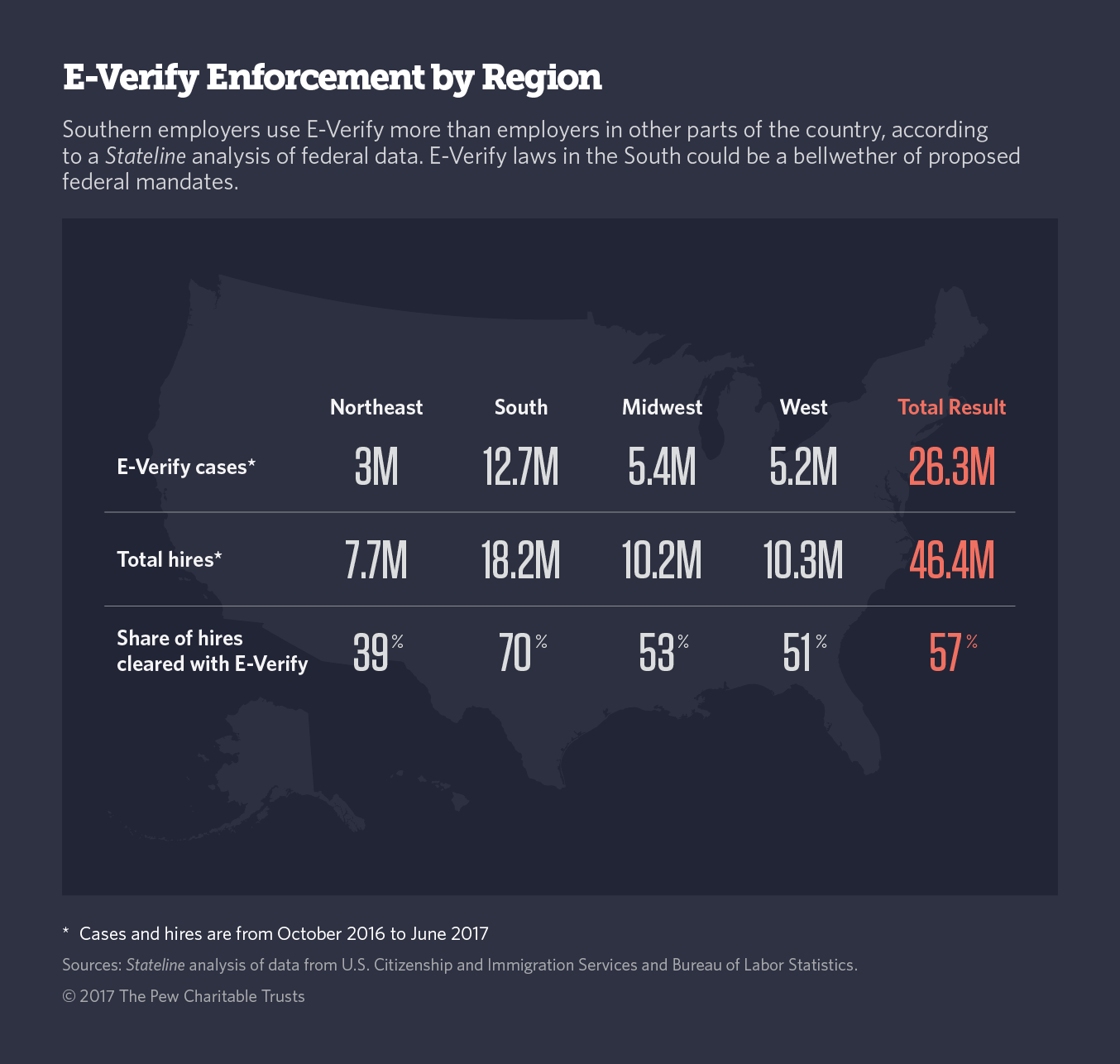 But a study of seven of the nine E-Verify states released earlier this month by the Federal Reserve Bank of Dallas suggests that state mandates have had mixed results. (Support for the study was provided by The Pew Charitable Trusts, which also funds Stateline.) The study did not include Louisiana or Tennessee, because those states have allowed businesses to use screening methods other than E-Verify.

Dallas Fed researchers determined that the mandate either reduced or slowed the growth of the population of unauthorized immigrants in Alabama, Arizona, Mississippi and Utah.

In 1986, the federal Immigration Reform and Control Act made it illegal to knowingly hire unauthorized workers. But in states that don’t mandate E-Verify screening, employers may hire workers with falsified paperwork and still comply with federal law, because they are not knowingly violating it. Furthermore, E-Verify cannot be used to screen existing employees — only new hires.

Pro-immigration activists say they oppose a national E-Verify mandate unless it includes some kind of help for the unauthorized workers who are already here.

“There are millions and millions of people in that situation and millions of employers who depend on their labor,” said Jessie Hahn, an employment policy attorney at the National Immigration Law Center.

Without legal work status for those already here, Hahn said, E-Verify means “shifting people into the underground economy where they’re not paying taxes and they’re more vulnerable to abuse.”

However, some longtime opponents of E-Verify recently have changed sides. Some business groups, for example, now say they would prefer a national standard to rules that vary by state and are hard to enforce.

Many small businesses such as restaurants, hotels and janitorial services have changed their minds because they’re afraid of being raided and closed down under an immigration crackdown, said Tamar Jacoby, president of ImmigrationWorks USA, a federation of small business owners that advocates for an expansion of legal immigration and guest worker programs.

“It will change the way companies do business, but I think Americans in general want to move toward a legal workforce,” Jacoby said. “Small business has been through a process the last few years — the employers who use it have been telling other employers that, yes, it’s a hassle at first and takes some time to set up, but then you can sleep at night.”

In return for supporting an E-Verify mandate, small businesses are hoping for a new visa making it legal for them to hire temporary foreign workers, much like the H-2A visas used for temporary farmworkers, Jacoby said.

Despite the Trump administration’s support for a national E-Verify mandate, and support from groups advocating limited immigration like the Center for Immigration Studies and the Federation for American Immigration Reform (FAIR), opinion is not unanimous, even on the conservative side.

“It’s an intrusive labor market regulation that raises the cost of hiring,” said Alex Nowrasteh, an immigration policy analyst at the libertarian Cato Institute who wrote a report in July making the case that E-Verify doesn’t help lower unemployment. A competing report in March 2017 from FAIR argues that E-Verify will boost employment for U.S. citizens.

The U.S. Chamber of Commerce, which sued unsuccessfully to stop Arizona’s law requiring E-Verify in 2010, lobbied Congress against a national E-Verify mandate between 2006 and 2009.

But in 2015 the group made an about-face and supported the idea of a national E-Verify plan, citing a change in opinion among both small and large businesses.

“The No. 1 concern expressed by chamber members regarding the expansion of E-Verify was to ensure there was a uniform national policy,” Randel K. Johnson, a senior vice president for the group, said at the time. “The patchwork of state laws and policies that relate to employment verification and E-Verify is a hindrance to the business community.”

Even though a federal law would pre-empt state laws on E-Verify, the bill as now written would allow states to continue with their own enforcement efforts. States could still require E-Verify compliance for business licenses as Georgia does, or audit compliance as South Carolina and Tennessee do, and levy fines and keep the revenue.

‘A Very Big Deal’ In Georgia

Georgia requires all employers to show E-Verify compliance before getting a business license and monitors cities and counties that issue licenses to ensure they comply. Georgia has by far the largest number of E-Verify checks in recent months at 2.4 million — more than California, which has four times as many workers.

“It was a very big deal in the state when the law went into effect” in 2011, said Zavodny, the Agnes Scott professor. “The press coverage was really big, and you do see signs in a lot of windows of stores and restaurants saying they use it.”