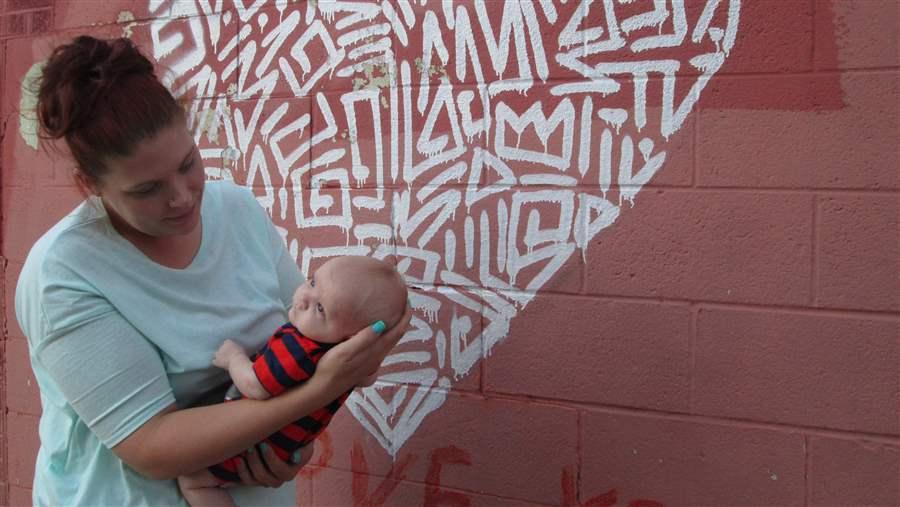 Stephanie Petitt holds baby Legend outside of ReMerge’s offices in Oklahoma City. The program aims to keep mothers out of prison and with their children.

OKLAHOMA CITY — When Stephanie Petitt was arrested for violating probation for prior drug and robbery convictions, she learned two things: She was 16 weeks pregnant, and she would probably deliver her baby while incarcerated at an Oklahoma prison.

In most places, an incarcerated woman who gives birth almost immediately hands over her newborn to a social worker, who places the child with a relative or with foster parents. Petitt said she was told she would have an hour to hold her newborn.

Just a few states offer alternatives that allow mother and child to stay together longer. At least eight states have so-called prison nurseries where nonviolent female offenders live with their children for a few months to several years.

But in Oklahoma City, pregnant women who are facing imprisonment for nonviolent offenses can avoid doing time and stay with their children by participating in a program known as ReMerge. The program, which is also open to mothers who have already lost custody of their children, includes two years of intensive therapy, parenting classes and job training. Women who graduate have their charges dropped.

Similar pretrial diversion programs for expecting women and mothers are scattered across the country, many formed at the city or county level. It’s difficult to determine exactly how many there are.

But the idea behind them is clear: Diverting women from prison and keeping families together can save money and help break the intergenerational cycle of incarceration. Researchers say separating children from their mothers causes significant distress, and that children are more likely to end up in prison if they have parents there. And with the number of incarcerated women — and the cost of imprisoning them — on the rise in some states, the programs are drawing new attention.

Oregon began a pilot diversion program in 2015, basing it on a Washington state program that serves both mothers and fathers facing incarceration. This year, Oregon extended its program to pregnant women, too. Supporters say it will allow the state to avoid paying $17 million to construct a new women’s facility.

Oklahoma City launched its program in 2011, spurred by Oklahoma’s high incarceration rate for women — the highest in the nation, both then and now.

Petitt was 27 and addicted to methamphetamines when she was arrested. She had already lost custody of her first two children, and planned on putting her next one up for adoption. But, she said, “as I sobered up, I felt the baby move, and I wanted to keep it.”

A judge sent her to ReMerge, and she had her baby while she was participating in the program.

“The whole time I was getting high, I wanted to stop and be a mom again, but I just couldn’t stop,” said Petitt, now 30. “This gave me a second chance at being a mom.”

Foundations interested in reducing the number of incarcerated women in Oklahoma pay for most of ReMerge, with the state covering the rest. The program serves up to 50 women at a time and costs $17,000 a woman a year. That’s a bit more than the roughly $15,000 it would cost to incarcerate each of them, but if the women were behind bars, they wouldn’t get the same level of treatment and support. 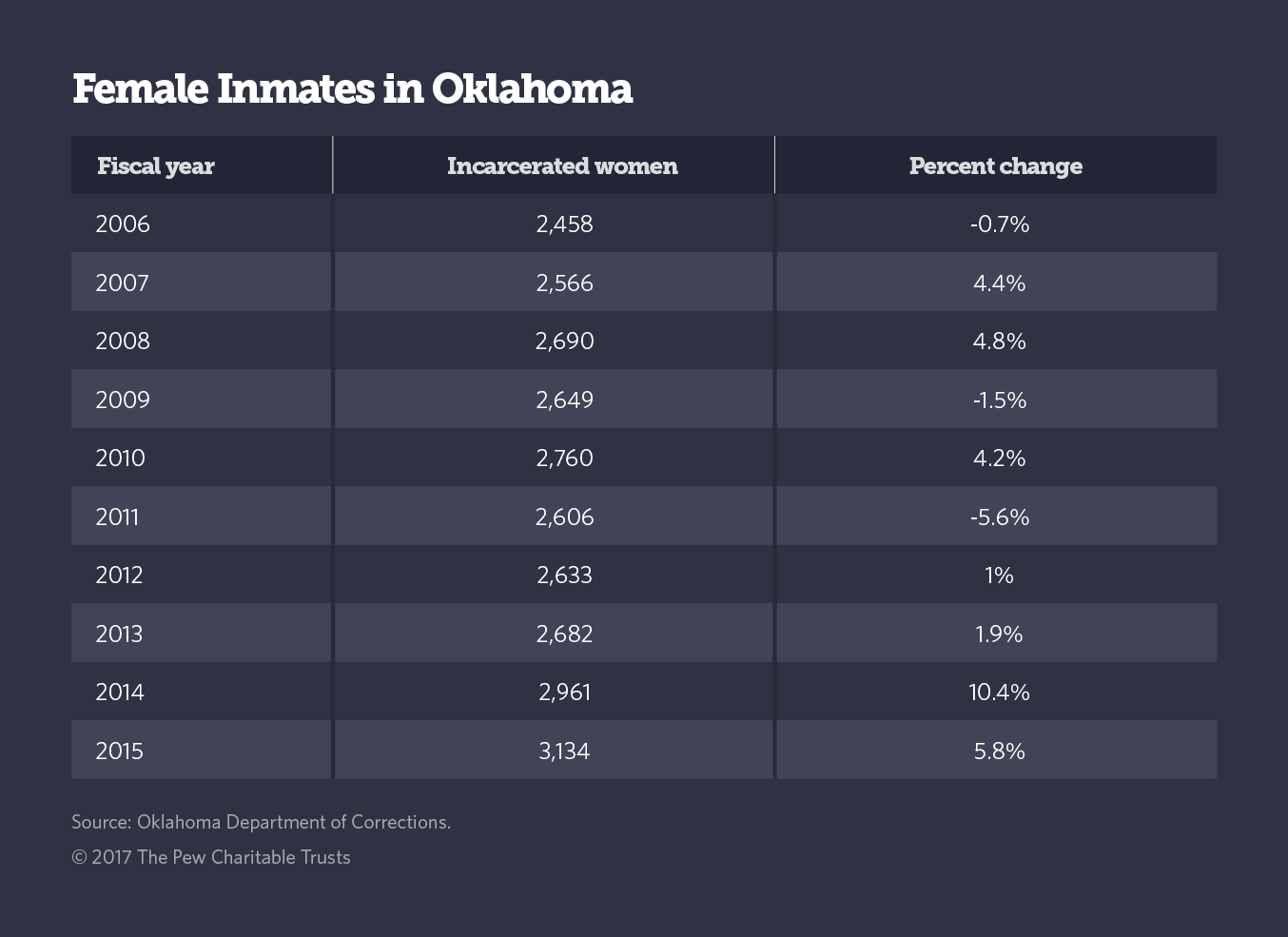 On one recent morning, 40 or so ReMerge participants sat in a florescent-lit conference room in the basement of a downtown building and started sharing personal details from their lives.

One woman with cherry-red hair cried as she described taking her 6-year-old son to the dentist to get several teeth pulled. Before she had custody of the boy, she urged his paternal grandmother, who was taking care of him, to make him brush his teeth. Now he’s missing so many it’s difficult for him to talk and eat. The woman next to her tried to comfort her by wrapping an arm around her shoulder.

From there participants scatter to a variety of parenting programs and therapy sessions. Women who need dental care get it. Those who smoke are enrolled in a cessation program. They also get help finding jobs.

The women aren’t permitted to own a cellphone until they’ve spent a month in the program. All of the women without a high school diploma must work toward a GED diploma, and nearly all of them spend the first 90 days in supervised housing. Participants also are barred from seeing people who aren’t vetted by ReMerge staff until they are months into the program.

Dusty Tate, a formidable woman with excellent posture, several tattoos and bright blonde hair, is the onsite probation officer for all the women. She administers random drug tests and stays in constant contact with the women, texting at all hours. Some texts are good news — “I got a job!” — others are bad news — “I’m thinking about relapsing.”

Much of the program is geared toward helping the women beat their drug addictions. Nearly 60 percent of women in federal institutions are serving time for drugs, as are a quarter of women in state facilities. Others have committed crimes such as theft or prostitution in to pay for a drug habit. 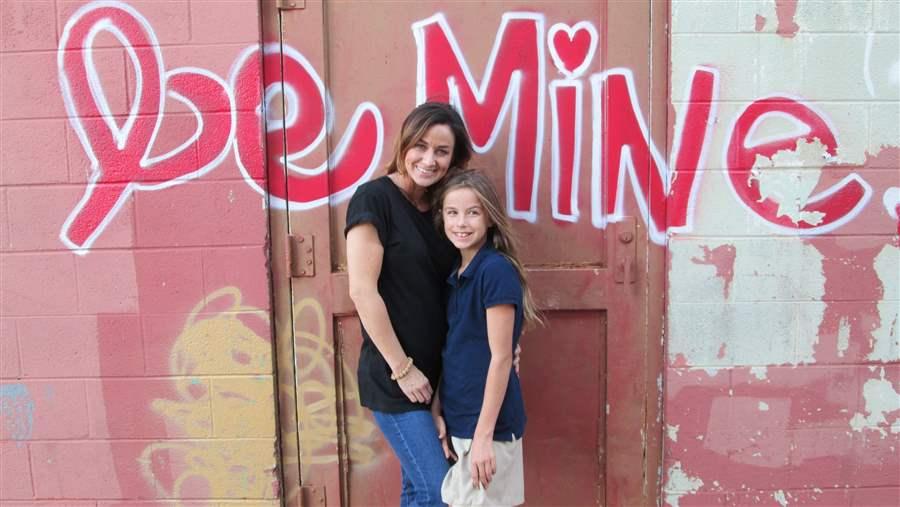 Kamber Caulkins and her 10-year-old daughter have lived together for the past year.

On Monday afternoon, after the rest of the women have gone home, about a dozen who are set to graduate from the program at the end of this month gathered for their hourlong weekly meeting. Most work full time and have regained custody of their children. Several came with them in tow.

Reuniting families is an emotional challenge as much as a legal one. Some children had to be reintroduced to mothers they had forgotten. Some mothers had to resist what they call “parenting out of guilt,” trying to make up for their absence by giving in to children’s demands.

But as they near graduation, they all say they’ve re-established bonds with their children and tasted a better life that will keep them motivated.