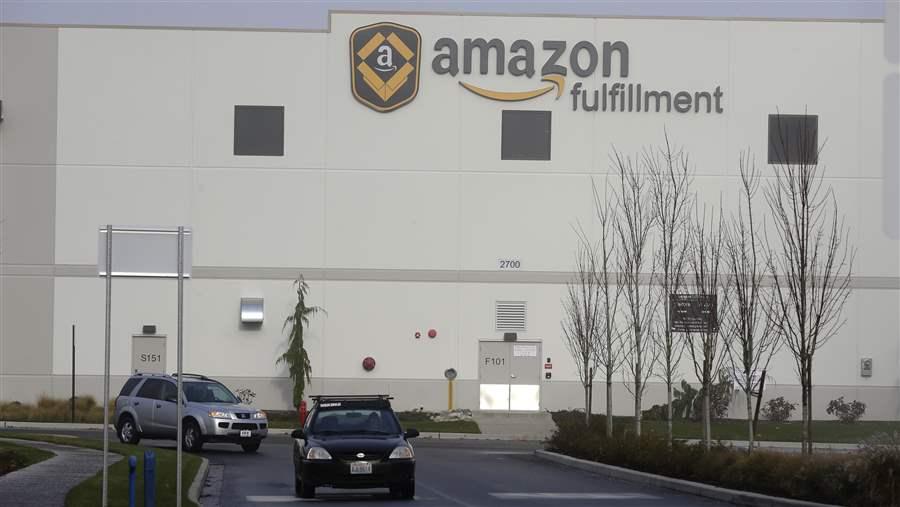 Cars drive away from an Amazon fulfillment center in DuPont, Washington. Twenty-four states are conducting an amnesty program for third-party sellers that contract with Amazon to distribute their goods but have failed to pay sales taxes.

More than half the states with sales taxes are using a temporary amnesty program to corral scofflaw online businesses into their tax systems, just in time to reap sales taxes from the upcoming holiday shopping season.

In the complicated world of online sales, small businesses often use a “marketplace facilitator,” like Amazon’s Marketplace service, to promote goods and fill orders. But the complexity also means that they often don’t pay their sales taxes, costing the states as much as $2 billion a year through Amazon Marketplace sales alone.

Overall, states estimate they could collect $26 billion more a year in sales taxes on products sold remotely, online and via mail order. Several states, led by South Dakota in 2016, have passed laws requiring sales tax to be paid by all online sellers when they sell to an in-state buyer.

But those laws are being challenged in the courts and are likely to end up in the U.S. Supreme Court, which is being asked to overturn a 1992 law requiring a business to have a brick-and-mortar location in a state to be subject to that state’s sales tax.

Under the amnesty deal, online sellers who sign up by Oct. 17 are expected to make a “good faith estimate” of the back taxes they owe in any of the 24 participating states. Then, state tax collection agencies will negotiate with the sellers over whether they need to pay any back taxes, and whether penalties will be assessed.

Most states have indicated they are not interested in collecting back taxes. Instead, with Amazon’s service growing rapidly and similar sites coming online in its wake, states are interested in getting those sellers on their tax rolls — and getting a cut of future sales.

The amnesty deal, brokered by the Multistate Tax Commission, is open to online merchants who participate with a marketplace facilitator website, the largest of which by far is on Amazon.

While Amazon has agreed to collect sales tax on its own products, it does not do so for third parties. Amazon spokeswoman Cecelia Fan said the company would not comment on the amnesty program.

Richard Cram, director of the commission’s national nexus program, which is administering the amnesty program, said state tax officials see a “large potential for sales tax revenue” from third parties selling on Amazon. States will be able to start collecting sales tax from companies that register for the amnesty program on Dec. 1. “States are anxious to get taxes on Christmas shopping,” Cram said.

But for sellers who use a marketplace facilitator like Amazon, figuring out exactly what taxes are owed where can be tricky.

Sellers list their merchandise on Amazon and ship their products to the internet giant, which stores the merchandise in warehouses all over the country to facilitate rapid shipment. But sellers and sales tax experts say Amazon sometimes fails to notify sellers that their products have been moved. Sellers are expected to collect and remit sales tax to the state where the merchandise was housed at the time of the sale.

It’s expensive and time-consuming for states to audit online sellers to find those that aren’t complying with sales tax laws.

And while many sellers say they want to comply with the law, they fear that high penalties and fees may put them out of business altogether, and they aren’t always sure where their inventory is located or to what state they owe tax.

Yetter said she had a client company that got caught for unpaid sales taxes in California where Amazon had just opened a warehouse, and ended up owing $100,000 in back taxes and penalties. It was enough to threaten that client’s business.

John Valentine, chairman of the Utah State Tax Commission, said his state is offering the amnesty program as another step in its efforts to urge online sellers to comply with tax laws of their own accord. For three years, Utah has urged sellers to come forward and offered to settle outstanding tax liabilities on an individual basis.

While he said the state is not able to “accurately project” what taxes it might be able to collect under the amnesty program, “a greater benefit to Utah is the voluntary compliance. Our strong preference is not to have to audit numerous online vendors and their customers.”

But, he noted, if an audit already has been initiated against a vendor, the amnesty program will not supersede it.

Lauren Willis, director of communications for the Texas comptroller, also noted the limits of its amnesty program. Only businesses whose sales in the state are all made through an online fulfillment service are covered by the program. If the seller has any other presence in Texas, it doesn’t qualify, she said.