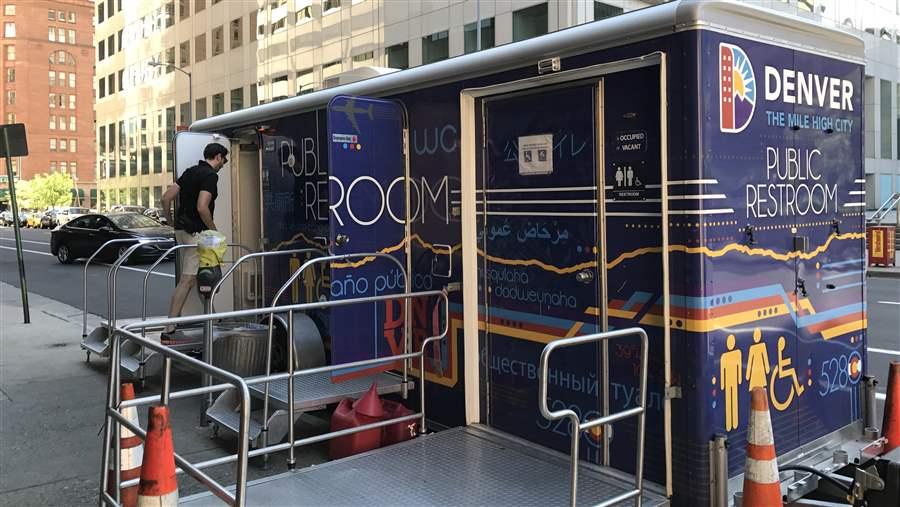 A man enters a mobile restroom in downtown Denver. City officials hope the bathrooms will make the urban core cleaner and more inviting.

DENVER — Here on Tremont Place, there’s a beacon of relief for lunching office workers, tourists shuttling along a nearby pedestrian mall, and the city’s growing homeless population.

It’s a public bathroom, and until last spring it wasn’t easy to find one in this part of downtown Denver.

Encased in a trailer that moves around the city, the three-stall bathroom offers the amenities of any brick-and-mortar facility — lights, running water and flushing toilets. An attendant cleans up between users, does minor repairs, and polices for illicit activity.

“We’re encouraging people to walk and bike and use transit and it just makes sense then to offer a public restroom as well in these places where people are gathering,” said Angela Casias, legislative services manager for the Denver Department of Public Works. “[We’re] trying to have a positive impact on all kinds of people.”

Denver is one of several U.S. cities using bathrooms not only to clean up areas rife with public urination and defecation, but also to increase tourism and foot traffic.

Portland, Oregon, has become famous for its Portland Loo, a stand-alone steel bathroom stall that sits on a city sidewalk and, unlike a traditional port-a-potty, connects to public water and sewer. San Antonio, San Francisco, Seattle, and a host of smaller cities have experimented with similar bathrooms. 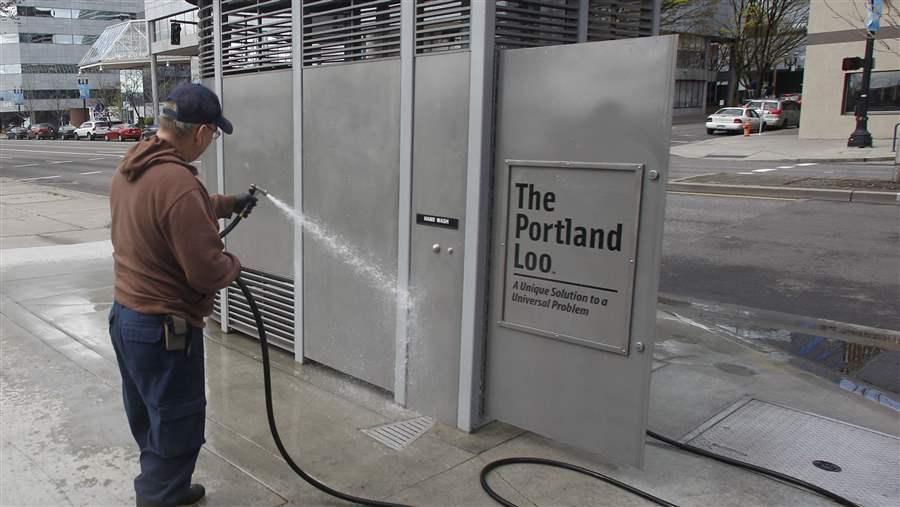 A man hoses down a Portland Loo in Portland, Oregon.

City and planning officials say the bathrooms not only clean up streets because they offer a place for people to relieve themselves during big events and for homeless people to use on a regular basis, but that they also encourage those with health conditions to visit downtown areas because they know a restroom will be available.

“Knowing that there’s a restroom there supports you physically and puts your mind at ease,” said Carol McCreary, program manager for Public Hygiene Lets Us Stay Human (PHLUSH), a Pacific Northwest-based advocacy group focused on access to public restrooms. “People will not congregate in multigenerational groups in public space unless the restroom is there.”

Denver has two bathrooms that move around the city. An online map shows where they are and when they’re open.

Public works officials are paying attention to how much use the bathrooms get in hopes of building permanent restrooms at key locations. They’ve also reopened some bathrooms in public parks.

On an average summer day about 170 people use the Tremont Place bathroom. Officials say they are receiving fewer complaints about human waste in the surrounding area and that use of the bathroom is split evenly between tourists, downtown workers and homeless people.

“A couple of Sundays ago there were 250, and there is sometimes more,” said Daryl Patton, who tends to the Tremont Place bathroom. “The flow of people is unbelievable.”

Groups like PHLUSH and the American Restroom Association, which advocates for clean, well-designed restrooms, push policymakers to make restrooms more available and accessible. But getting them to take the issue seriously can be a challenge, McCreary said.

“You start by documenting need, and you usually do that by walking around and showing that there are not enough [bathrooms],” and how much it costs to clean up, McCreary said.

Some in government worry the restrooms, especially if they are not staffed, will attract vandalism, crime and drug use.

Denver’s mobile bathrooms have syringe disposal boxes meant for people with diabetes and other conditions. City officials acknowledge that drug users may be shooting up inside. But attendants check on people who are in there too long, and there have been no overdoses, Casias said.

The Cost of Doing Business

Public comfort stations once populated cities, but as city dwellers turned to the suburbs for housing and shopping in the mid-20th century, the bathrooms were vandalized and neglected and cities closed the facilities. After the Sept. 11 terrorist attacks, office and apartment buildings stepped up security, limiting access to their facilities.

“There started to be a problem,” said Robert Brubaker, founder of the American Restroom Association. “People hesitated to go to certain places because there was a fear they wouldn’t find proper sanitation.”

Now cities are reopening bathrooms and building new ones that fit in with modern architecture.

Evan Madden, of Portland Loo Inc., says his company’s sidewalk bathrooms are meant to be an alternative to older, dirty, smelly public restrooms. They have small openings at the top and bottom, which allow passersby and police to see whether someone is using the unit and sniff out illegal activity that may be going on.

“You don’t have complete privacy, and it’s not supposed to be comfortable,” he said. “It’s cold, sounds pass through and everything.”

Unlike Denver’s restrooms, the Portland Loo is designed to be used without an attendant. Essentially, it is a standard restroom stall transported to the street.

Though the bathroom costs more than $100,000 to purchase and install, its metal construction makes it cheap and easy to clean. A nonprofit charges the city $18,600 a year to clean its eight Loos.

In Denver, it costs almost that much — $15,000 — to staff and maintain a portable restroom for one month. Much of that cost goes to paying the attendant.

Denver officials say having the attendant is critical to the restroom’s success and do not plan to alter that model. Other cities have struggled to maintain unattended, self-sustaining bathrooms.

After spending $5 million on five self-cleaning restrooms, Seattle sold them for just $12,000 on eBay. The unattended bathrooms became havens for illegal activity and the self-cleaning mechanisms got clogged, ultimately costing the city more than it intended to spend on upkeep and maintenance.

There was too much automation, Madden said. And its program failed because there were “too many moving parts that were vandalized, too much privacy for drug use and prostitution.”