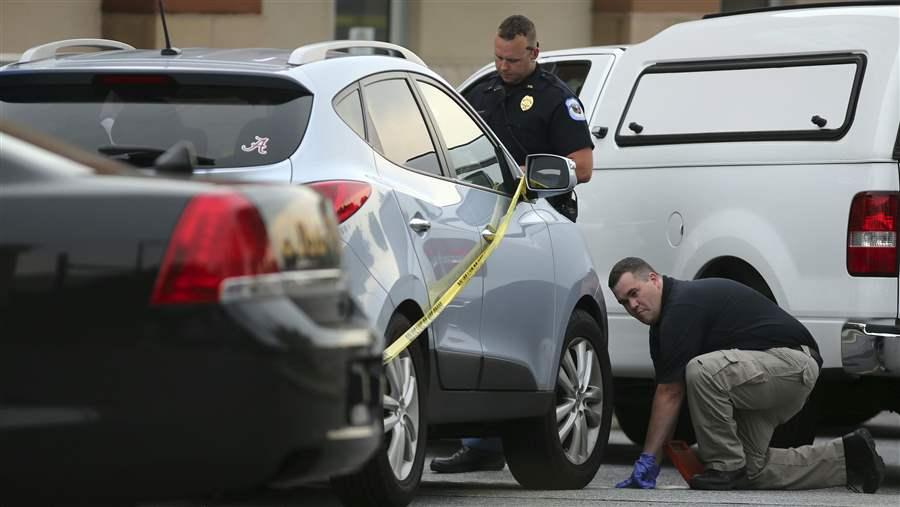 Police investigate an SUV where a toddler died in Georgia in 2014. At least 16 states have enacted laws to help save children in cars in the last four years.

By the time Steven Eckel spotted her, the baby girl in the back seat was drenched in sweat. The 4-month-old had been left alone in a locked car in the parking lot of a New Jersey shopping center. It was a steamy August afternoon, and she was covered with a wool blanket.

“She was hysterically crying, screaming,” Eckel said. “Her eyes were rolling in the back of her head.”

He ran to his car, got a sledgehammer, ran back to the car, shattered the window, and pulled her out. Police say he saved her life.

Eckel said he didn’t think twice about breaking the window. But, worried that others might have hesitated — maybe out of the fear that the parents would be angry, or even sue — a growing number of states are passing laws to encourage people to take action.

This year, at least five states — Alabama, Arizona, Colorado, Oregon and Texas — enacted laws to protect bystanders from being sued for breaking a car window to rescue a child in an emergency. Over the last four years, amid growing awareness of the dangers of leaving children alone in cars, at least 16 states have enacted such laws.

But in many places, it wasn’t a concern for children that set the measures in motion. As videos of dogs trapped in cars circulated online and in the media, local animal advocates contacted their state legislators to see what could be done. And once lawmakers started looking into protecting pets, they realized that children might need help, too, and added them to their proposals.

In Arizona, a group of college students asked state Sen. John Kavanagh to propose a bill to protect bystanders who help dogs trapped in hot cars. But when Kavanagh, a Republican, submitted his bill, which passed, he included children. “I can’t run a bill that says you can’t get sued if it’s a dog, but you can get sued if it’s a kid,” he said.

Some legal experts say the laws may not be needed, though, if they apply only to people. All 50 states already have “good Samaritan” laws that protect people who cause harm trying to help someone in an emergency. Some apply only to professionals, such as doctors or emergency responders, but many apply to anyone who tries to help.

These earlier laws, most of which are about 50 years old, don’t specify whether the protections would apply if someone damages personal property such as car windows. But some of them are written so generally that they may, said Dov Waisman, a law professor at Southwestern Law School who studied the original laws.

Regardless, supporters of the new laws say they clear up exactly who is protected, and when. Under the newer laws, bystanders who break a car window to save a child — or in some cases a pet or a vulnerable adult, such as someone with a disability — in an emergency can’t be held liable if the car owner files a civil suit.

“You would hope that a parent wouldn’t press charges,” said Tennessee state Rep. David Hawk, whose bill in 2014 became the first of the new good Samaritan laws. “But who knows in this litigious world we live in these days.”

It only takes minutes for the inside of a car to go from comfortable to deadly hot. A car traps heat and warms air in the same way a greenhouse does, said Jan Null, a meteorologist and lecturer at San Jose State University who studies the topic. The temperature inside rises about 19 degrees in the first 10 minutes, from 90 degrees to a deadly 109 degrees on a summer day, according to Null’s estimates.

Most children are left in cars by mistake, according to Null and advocates for child safety. The number of deaths surged in the 1990s, when it became illegal in many states to drive with a small child in the front seat because of airbag dangers. “So we put them in the back seat,” Null said, “and basically put them out of sight.”

The new laws provide protection for bystanders who help, but only in certain circumstances. Most of the laws say a bystander must have a “reasonable belief” that the person or pet is in imminent danger. In many states, the person who helps must first check to see if the doors are locked, call 911, and, after breaking the window, must wait at the scene until emergency responders arrive.

Researchers such as Null said they don’t know of anyone who has been sued for breaking a car window to save a child. But lawmakers and others worry that the fear of being sued may be preventing people from acting.

And, when a few more minutes in a hot car means life or death, supporters say the laws could save lives.

“No one should have to hesitate when a child’s life is at stake,” said Amber Andreasen, director of Kids and Cars, a safety advocacy group.

The first law of this kind was enacted in 2014 after Hawk heard about two dogs that suffered from heat stroke after being left in a car in Tennessee. He drafted it to include just child victims, not dogs, after he realized they weren’t yet protected. His bill to include pets was enacted in 2015.

In Texas, as in Arizona, bills were introduced after legislators heard from local groups concerned about the welfare of animals.

But the version of the Texas legislation that became law did not include animals. Animal welfare groups there faced resistance from rural ranchers who were concerned that the measure might apply to livestock they leave in the back of a cattle carrier, said state Rep. Celia Israel, who supported the law.

Not everyone agrees that bystanders should try to break windows to save children, either. Safe Kids Worldwide, a national nonprofit that advocates for child safety, encourages people who spot children in distress in cars to call 911, and let emergency responders save the child, said Anthony Green, the organization’s director of public policy. The child could be hurt when the window is broken, he said.

Andreasen and Green say their organizations focus on initiatives that may help prevent children from being left in hot cars in the first place, such as awareness, education and car technology. The groups are advocating for a proposal in the U.S. House, the Hot Cars Act, which would require cars to include a sensor that alerts drivers when a child has been left in a back seat.

“If there aren’t any children being left then we won’t have to rescue them,” Andreasen said.

There isn’t strong evidence that the original good Samaritan laws made people more inclined to act in emergencies, Waisman said.

But results from one recent survey, conducted by Public Opinion Strategies and sponsored by Auto Alliance, an industry group, and Safe Kids, indicated that the new laws might have the power to change behavior. After the basics of good Samaritan laws were explained to parents and caregivers who participated in this year’s survey, more than half said they would be more likely to act if they saw a child in distress in a car if their state had such a law, said Micah Roberts, a partner at Public Opinion Strategies.

When breaking the car window to save the baby girl in New Jersey, Eckel said it didn’t cross his mind what the laws were. He considers it a moral issue: He said he cared more about the baby more than what happened to him.

“It’s about being humane, and helping another human’s life.”