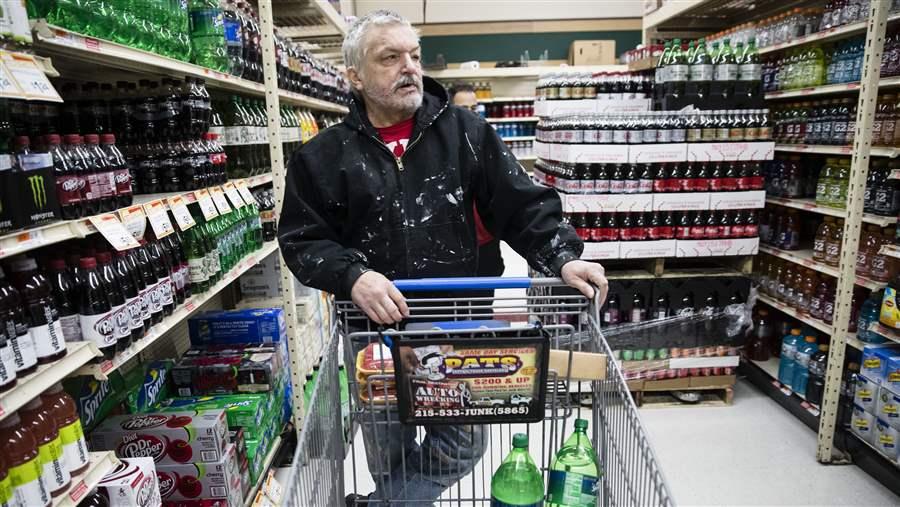 A customer shops for soda in Philadelphia, where beverages are subject to a new tax. The beverage taxes were aimed at sugary drinks, but beverage tax rules in states and cities are so complex that stores have taken to labeling which products are subject to the tax and which are not.

This year Seattle, Philadelphia and Cook County, Illinois, slapped extra excise taxes on soda and other sweetened beverages in what they touted as an effort to reduce obesity, save public health dollars and raise revenue. But the devilish details in the levies are causing many shoppers and food sellers to scratch their heads.

While they are known as “soda taxes,” in some places they also cover sugarless diet sodas, iced coffee and some bottled water.

The arcane rules for taxing beverages point to a broader taxation challenge: Unless state legislatures and city officials target broad categories, all gasoline sales, for example, their efforts to tax individual items often get hung up over how to define what’s taxed, as well as how to weigh concerns from competing constituencies. And the politics of imposing broad tax hikes is harder than taxing a narrow category of goods, such as products that are viewed as bad for your health.

“What this really speaks to is the complication of defining sales tax bases,” said Meg Wiehe, deputy director of the liberal Institute on Taxation and Economic Policy. “Particularly when most states don’t tax food consumed at home, or they tax it at a lower rate. It creates all sorts of crazy rules. You have to draw the line somewhere.”

One of the reasons legislatures like piecemeal taxes is that they only gore a narrow slice of voters, said Donald Boyd, director of fiscal studies at the Rockefeller Institute of Government at the State University of New York at Albany. But that leads to the intricacies that can make the taxes so confusing.

Some studies show the taxes steer consumers away from sugary drinks. When Berkeley instituted a soda tax in 2015, a University of California, Berkeley, study showed a 21 percent drop in the consumption of soda and other beverages containing sugar in Berkeley’s low-income neighborhoods. Consumption of water, which is not taxed in Berkeley, went up nearly two-thirds.

In Cook County, which includes Chicago, the tax on sweetened beverages covers any nonalcoholic beverage that’s sweetened, whether artificially or with sugar, and whether it comes in bottles, cans or from a fountain. The tax applies to regular and diet soda, sports and energy drinks, and juice products that aren’t 100 percent fruit or vegetable juice. It also applies to ready-to-drink sweetened coffees and teas — as long as they are less than half milk.

The tax doesn’t apply to flavored bubbly waters without sugar but does cover sparkling waters that are sweetened with sugar. It’s no wonder a shopper needs a few minutes standing in the aisle to figure out if a bottle is taxed. Some stores have taken to putting labels on the shelves to point out what’s taxed and what’s not.

“Slightly flavored water vs. sugary water vs. clear water — no legislature can figure out the right way to tax these things,” said the Rockefeller Institute’s Boyd. “Often they are just revenue grabs.”

The county does not levy the tax on water, infant formula, beverages for “medical use” or liquid weight-loss meal replacements.

The tax rate is a penny per ounce, so a 12-ounce can of soda costs an extra 12 cents. For sweetened fountain drinks provided by a machine dispensing syrup mixed with carbonated water, the tax is assessed on the total amount of beverage that the syrup will make, following manufacturer’s directions. For example, a 5-gallon bag of syrup will make 3,840 ounces of beverage. At a penny an ounce, the tax to the retailer for that bag is $38.40. Retailers can then recoup the tax by selling fountain drinks.

Some Chicago retailers faced lawsuits when they attempted to charge the tax on beverages bought with food stamps, formally known as the Supplemental Nutrition Assistance Program. Federal law prohibits charging tax on SNAP purchases, but Cook County tried to save retailers the hassle by telling them to go ahead and charge the tax and then customers could get refunds from the state. That procedure was ruled out of bounds by the U.S. Department of Agriculture officials who oversee the program. The county struck the refund language from the beverage tax law.

Seattle took a slightly different approach. Starting in 2018, the city will apply a new 1.75 cent per ounce tax on sweetened drinks, about $1.18 for a 2-liter bottle of soda. Its tax covers sports drinks such as Gatorade, energy drinks such as Red Bull and fruit drinks such as Sunny Delight, along with syrups used in soda-fountain pop. But it exempts diet sodas.

The ordinance cites rising rates of “diabetes, obesity, and tooth decay” and notes that “communities of color continue to be disproportionately affected.” Revenue raised by the tax will fund programs that “will reduce the academic achievement gap.”

Seattle debated levying its tax on diet drinks after some members of the City Council argued it was unfair to exempt beverages favored by wealthier white consumers. But the council ultimately rejected that argument, noting that the evidence that diet soda is harmful is less solid than the research on regular sodas. The council also exempted baby formula, medicine, weight-loss drinks and 100 percent fruit juice.

To confuse matters even further, Washington state this year repealed its sales tax exemption for bottled water. Bottled water is defined as water “placed in a safety sealed container” for human consumption. Water delivered for water coolers is also taxed. A refund is available for people who purchase bottled water with a prescription or whose water source is deemed unsafe. And the tax doesn’t include ice or water that is dispensed from a self-service dispenser.

Philadelphia’s beverage tax, which went into effect Jan. 1, is 1.5 cents per ounce on sweetened and diet beverages as well as syrups and concentrates used in fountain dispensers. Almost every kind of drink that comes in a bottle or can is taxed, except milk, water and pure juices without added sugar. For example, orange juice is not taxed, but Sunny Delight and other juice drinks with less than half juice are.

Philadelphia taxes margarita mix, but not bloody mary mix. It exempts bottled water, but not water that is “enhanced” with natural or artificial flavors, sugar, sweeteners, vitamins or minerals. A tea or coffee drink is subject to the tax if it has “any form of caloric sugar-based sweetener, including, but not limited to, sucrose, glucose or high fructose corn syrup; or any form of sugar substitute, including stevia, aspartame, sucralose, neotame, acesulfame potassium (Ace-K), saccharin, and advantame,” according to the regulation.

The beverage industry spent $1.5 million in advertising trying to kill the Philadelphia tax, saying it was unfair to target only one industry. Advocates for education, where the new money will be directed, eventually prevailed.

But recently released revenue figures suggest backers of the tax may have overestimated the amount of money it will bring in. The Philadelphia beverage tax yielded $6.5 million in July, the first month of fiscal 2018. That is less than the city would need to average each month in order to hit its $90 million annual projection. City officials say they aren’t worried as the new money is still funding education efforts, including pre-K, that weren’t funded before.

Patrick Basham, director of the Democracy Institute, a right-leaning think tank, said the beverage taxes get so incongruous and difficult because public officials, in the name of preserving public health, initially set out to throw their net widely over something that is “bad,” i.e., sugar, but then realize that the wider they throw the net, the more revenue it brings in.

“They go for that initial slice, then they realize, the more slices, the more revenue,” he said. “Putting those things together is why we end up with a hodgepodge of things.”