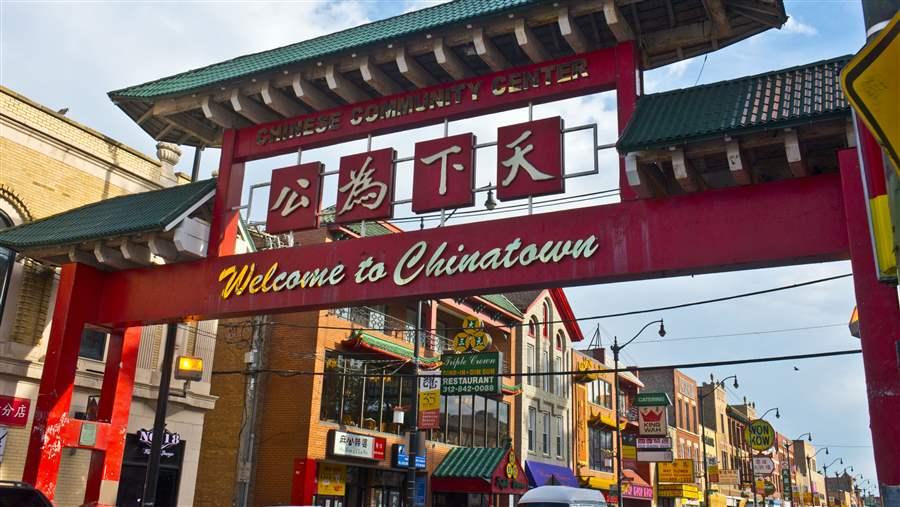 CHICAGO — On a busy weekday in July, Chinatown’s main drag pulses. Families queue up at the Legend Tasty House, waiting impatiently for rolled ice cream, the line stretching out onto the street. Tourists cram into stores selling trinkets and Chinese herbal remedies. Old people in straw hats camp out on the sidewalk, peddling produce.

Just a few blocks away, the 2-year-old Chinatown Public Library, a $19.1 million, 16,000-square-foot glass behemoth, is a gleaming illustration of Chicago’s determination to preserve this ethnic enclave. The library offers English classes, but also classes in Chinese, tai chi and Cantonese opera.

Chicago’s Chinatown is growing — and becoming more Chinese — even as many other cities’ Chinatowns, along with their Little Tokyos and Koreatowns, are starting to shrink in the face of encroaching development.

People who want to preserve ethnic enclaves such as Chicago’s Chinatown say they provide essential social networks to newcomers and established residents alike. They also provide vital tourism dollars to their cities, and their microbusinesses serve as “the No. 1 job creators,” said Seema Agnani, executive director of the National Coalition for Asian Pacific American Community Development (National CAPACD).

“What distinguishes a really exciting city from the same old, same old? It’s the character of its people,” said Teresa Córdova, director of the Great Cities Institute at the University of Illinois at Chicago. “And ethnic enclaves are a part of that.”

But scholars have long debated the role of traditional ethnic enclaves. Some see the neighborhoods as evidence that immigrants have failed to integrate into the larger society. And some research has shown that immigrants who cluster in these neighborhoods are less likely to learn English, adapt to the customs of their new country, or climb the economic ladder.

Some people flourish in these enclaves, while others struggle, said Kay Hymowitz, a senior fellow at the Manhattan Institute, a conservative think tank, and the author of “The New Brooklyn: What It Takes to Bring a City Back.”

Recent immigrants are among those who tend to benefit from settling in these neighborhoods, particularly in the U.S., which does not have policies in place that ease immigrants’ assimilation, said Brigitte Waldorf, a Purdue University professor who studies immigration.

“Living among other immigrants from the same origin country can provide much needed assimilation assistance,” Waldorf said, such as encouraging newcomers to become citizens — and helping them to achieve that goal.

But as the upper-middle class returns to U.S. cities, gentrification is putting new pressure on these communities. Many highly paid workers are being drawn to urban neighborhoods that traditionally housed lower-income, working-class immigrants. Demand exceeds supply, which may make some displacement inevitable, she said.

“If I were a policymaker, I would try to find a middle ground that allowed for development and newcomer talent to come in” while preserving diversity, Hymowitz said. “That’s what you need to keep a city growing and thriving.”

It’s a familiar American story: New immigrants settle in densely packed, inner-city neighborhoods with other people from back home. And as they prosper, they move on.

Chinatowns from San Francisco to Boston sprang up in response to segregation, redlining and other forms of housing discrimination, said Gen Fujioka, policy director and general counsel for the Chinatown Community Development Center in San Francisco.

“People have to start somewhere,” Fujioka said. “And these neighborhoods have been important gateways to America.”

These days, most Greektowns in urban centers are Greek in name only, save for a restaurant or two. Los Angeles’ Koreatown is mostly Latino.

Over the years, many cities’ Chinatowns deteriorated as residents left for suburban pastures. Many Chinese-American residents fled the Washington, D.C., Chinatown in the wake of the 1968 riots, settling in the nearby suburbs of Maryland and Virginia.

Today, city dwellers are giving those neighborhoods a second look. Ethnic enclaves are often located close to downtown and financial districts, which make them attractive for developers.

Median rents in Chinatowns across the country increased by nearly three-quarters between 2010 and 2014, compared to the national median of about half, according to a 2016 report by National CAPACD and the Council for Native Hawaiian Advancement.

White populations in Chinatowns in Boston and Philadelphia doubled in the last decade as the overall white populations in those cities decreased, according to a 2013 report by the Asian American Legal Defense and Education Fund. Meanwhile in New York’s Chinatown in Manhattan, where luxury high-rises are sprouting up, whites were the only racial group whose population increased.

The report found that government policies such as rezoning to encourage the construction of luxury condos and casinos played a part in transforming working-class Asian neighborhoods with multigenerational households into more affluent areas populated by whites without children.

In the D.C. Chinatown, fewer than 300 Chinese residents remain, a decrease of more than a third since 2000. The median price for condos in the tourist-choked stretch dominated by chain stores and a sports arena is $510,000, making it one of the most expensive neighborhoods in the city.

Ultimately what may keep Chicago’s Chinatown intact, compared to, say, similar areas in Boston or Seattle, is that community members were able to buy land decades ago, said Janet Smith, co-director of the Voorhees Center for Neighborhood and Community Improvement at the University of Illinois at Chicago. Chicago’s real estate remains relatively affordable, compared to other cities around the country.

In the late 1800s, Chinese immigrants settled right next to the heart of Chicago’s financial district. In about 1912, faced with rising rents and escalating racial tensions, Chinatown’s leaders moved the community to the much more affordable Near South Side. Its location away from downtown may be one reason the neighborhood has been insulated from gentrification, Smith said.

Other Chinatowns may have a Chinese footprint, with lots of Chinese businesses, but few locals may actually own the land, she said, making them vulnerable to displacement.

These days, most Chinatowns no longer serve as a port of entry for new immigrants, many of whom go straight to the suburbs. But Chicago’s Chinatown continues to be a locus for recent arrivals, said Peter Strazzabosco, deputy commissioner of the Chicago Department of Planning and Development.

The neighborhood’s success is at least partly due to the close proximity of essential support services, community centers, affordable housing and other social resources, Strazzabosco said. All of which “make it an attractive destination for Chinese immigrants, as well as tourists seeking an authentic ethnic neighborhood experience.”

And here, when it comes to real estate, Chinese sell to other Chinese, unlike other ethnic groups in other parts of the city, housing experts say. “For Sale” notices are posted in Cantonese, so unless you speak the language, you’re out of the loop, said Debbie Liu, community organizer for the Coalition for a Better Chinese American Community, which includes church groups, social service agencies and the Chicago Chinatown Chamber of Commerce.

In 2014, community leaders in Chinatown announced development plans for the neighborhood, including the library and a new boathouse and fieldhouse in the neighborhood’s park, as well as increasing educational resources for high schoolers, who attend school outside Chinatown.

“We work with the mayor; we have a very close relationship with our alderman. We maintain these relationships. That’s very important,” said Esther Wong, executive director of the Chinese American Service League in Chicago. Wong’s group was part of a coalition that helped craft the “vision plan” to guide future development in Chinatown.

Neighborhood organizations also offer support to residents and local businesses, so that they can stay put. You won’t find a Starbucks in Chicago’s Chinatown. Or any other major franchise, for that matter.

That wasn’t a deliberate strategy, but it bodes well for local businesses, Liu said.

“People here are starting to complain that there’s no Starbucks,” she said. “But people don’t realize that for every $5 you spend on a drink at Starbucks, it could’ve gone to a local tea shop instead.”

Tim Henderson contributed to this report.