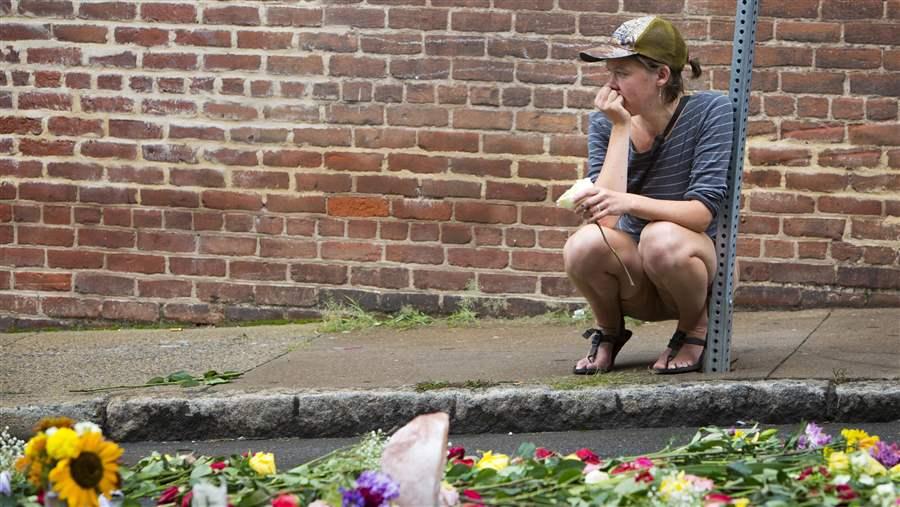 A woman leaves a flower at a memorial on the Charlottesville, Virginia, street where Heather Heyer was killed when a car rammed into a group of counterprotesters. Heyer’s death may change how lawmakers approach campus free speech legislation.

The sight of white supremacists marching through the heart of the University of Virginia, carrying flaming Tiki torches and shouting “Jews will not replace us!” — followed by the killing of a counterprotester at a rally in downtown Charlottesville the next day — may put the brakes on state efforts to strengthen campus free speech protections.

At least seven states (Arizona, Colorado, Missouri, North Carolina, Tennessee, Utah and Virginia) have enacted such laws since 2014, and many other states considered them this year. But the death of 32-year-old Heather Heyer in Charlottesville this month showed how hateful speech can lead to violence. That might prompt lawmakers to rethink how such bills are written or whether to support them at all.

"It has been really distressing and upsetting to watch violence used against protesters, and I expect that to have a profound effect on how lawmakers view these issues,” said Joe Cohn, legislative and policy director for the Foundation for Individual Rights in Education, a nonpartisan group that helps lawmakers write free speech bills.

After Charlottesville, he said, “I think that my work may be cut out for me.”

As emboldened white supremacist groups plan events intended, in part, to provoke diverse, liberal communities, political leaders and even free speech advocates such as the American Civil Liberties Union have struggled to respond.

Legal experts say campus free speech laws are often redundant, because public institutions have to uphold the First Amendment under federal law anyway. Colleges generally have adequate policies for disciplining overly disruptive heckling and other violations of free speech without being required to by state law, said Michael Olivas, a higher education law expert and professor at the University of Houston Law Center.

But college and university leaders say some measures state lawmakers have considered recently could prevent campuses from disinviting speakers who pose a threat to safety or could suppress the free speech rights of counterprotesters.

Michigan Sen. Patrick Colbeck said the death in Charlottesville hasn’t deterred him from pushing legislation he proposed to promote campus free speech. “I think the clashes that we saw there are more a result [of the fact] that we haven’t had an open dialogue,” the Republican said.

Doubling Down on Free Speech

This year lawmakers in 22 states considered bills to protect free speech on public college campuses, according to the latest tally from the American Association of State Colleges and Universities. That count includes some bills designed to protect student journalists, said Thomas Harnisch, director of state relations and policy analysis for the organization.

Republicans, in particular, have pushed these laws in response to what they see as hostility toward conservative speech on liberal campuses. In recent years student protesters have driven away speakers such as former Secretary of State Condoleezza Rice, shouted down remarks by conservative author Charles Murray and escalated into riots ahead of a speech by right-wing provocateur Milo Yiannopoulos.

Colbeck said such incidents remind him of the propaganda agency that sought to eliminate free thinking in George Orwell’s novel 1984. “Our universities have devolved into those ‘ministries of truth’ George Orwell warned us about,” he said.

Most of the laws enacted or considered so far don’t go further than reinforcing existing First Amendment law. “We have the First Amendment. So any law a legislature is going to pass is going to take the form of, ‘and we really mean it,” said Jim Manley, an attorney at the Goldwater Institute, a conservative think tank in Arizona that supports campus free speech legislation.

But some of the new laws penalize colleges for suppressing free speech, and some proposed laws would penalize students for doing so.

Five of the state laws passed so far are based on model legislation produced by the Foundation for Individual Rights in Education. Arizona, Colorado, Missouri, Utah and Virginia have enacted laws that prevent public universities from creating “free speech zones,” designated areas for protests, rallies and pamphleteering. Under the Missouri and Utah laws, courts will automatically award damages to a person whose free speech rights are violated.

North Carolina enacted a law this summer based on a model from the Goldwater Institute. The law directs the Board of Governors of the University of North Carolina system to create a committee to monitor free expression on campus and requires university campuses to include a discussion of free speech in freshman orientation.

It also directs the Board of Governors to develop a free expression policy that, among other provisions, requires universities to discipline students who substantially disrupt protests, demonstrations or other speech and abolish both free speech zones and “safe spaces,” designated areas where students can avoid upsetting ideas.

Some proposed measures, such as the one the Wisconsin Assembly approved this summer and the state Senate is now considering, contain stronger language. The Wisconsin bill threatens students with suspension or expulsion if they repeatedly disrupt the free speech of others with violent or disorderly conduct.

Opponents say that language is too prescriptive and argue that the bill could prevent students from exerting their own First Amendment right to protest.

“I think it’s unconstitutional, this bill,” said Rep. Chris Taylor, a Democrat who represents Madison, home to the University of Wisconsin. “It would kill speech, no doubt about it.”

Michigan’s Colbeck has also authored two bills on campus free speech — one that would abolish free speech zones and one modeled on the Goldwater legislation — that would apply to both public universities and community colleges. The legislation is opposed by the American Civil Liberties Union of Michigan, which says it vaguely defines what counts as interfering with another’s speech and prevents universities from penalizing free speech disruptions on a case-by-case basis.

Universities in the Middle

Meanwhile, universities are trying to figure out how to balance their responsibility to uphold the First Amendment with other considerations, such as campus safety and the need to protect individuals from harassment and discrimination.

Free speech shouldn’t be a free-for-all, said Jonathan Alger, president of James Madison University, a public university in Virginia. “The First Amendment is not completely unlimited,” he said.

Case law says universities can regulate the time, place and manner of speech. They can stop people from rushing into a classroom and taking it over to talk about an unrelated issue, for instance. They can stop rowdy students from yelling into bullhorns in the middle of the night, or creating too much noise in a library.

Under First Amendment law, colleges have to cite convincing evidence that a speaker, rally or demonstration could lead to violence in order to cancel it. The violence in Charlottesville gives colleges and universities legal cover for canceling white supremacist rallies organized by similar groups, Olivas said, at least in the short term.

In the days after the demonstrations in Charlottesville, the University of Florida, Texas A&M University, Michigan State University, Louisiana State University and Penn State University all canceled events planned by white nationalists, citing their concern that the events could lead to violence. In all of those cases, the groups had booked or asked to book event space on campus without being invited by a student or faculty group.

Peter McDonough, general counsel for the American Council on Education, said that the violence in Charlottesville confronts colleges with a different kind of dilemma than, say, a campus group inviting a controversial speaker to talk politics.

The white supremacists didn’t come to the University of Virginia to have a reasoned debate with students. They just showed up and walked through campus, chanting slogans. There were few, if any, students sleeping in the dorms they marched past, because undergraduates hadn’t moved in for the fall semester yet.

“You’re not inhibiting academic freedom in this context,” McDonough said. The question is more about how to regulate public space, he said, which is the same question mayors across the country are confronting.

Complicating the safety concerns, colleges in many states are also implementing campus carry laws that make it more likely that some people on campus — potentially on both sides of a debate — could be armed. The Charlottesville demonstrators included heavily armed militiamen.

Cohn, of the Foundation for Individual Rights in Education, said he’s thinking about adding a few lines to his model bills to say that controversial events can only be canceled if there’s a specific threat and colleges have made a reasonable effort to police them. That change would merely reiterate existing First Amendment case law on the subject, he said, but it might stop colleges from being overeager to cancel such events.

Universities, meanwhile, are looking for ideas for new policies that could preserve safety without raising any free speech concerns. Alger said one idea is to require all visiting speakers — regardless of the point of view they’re coming to promote — to reimburse the college for the cost of providing security for the event.