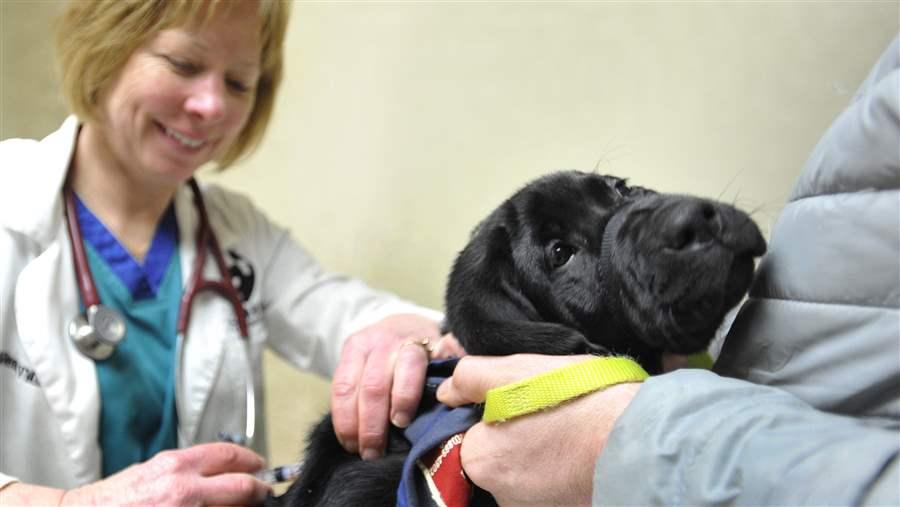 A Pennsylvania veterinarian administers an injection to a patient. Some states are asking vets to do more to prevent pet owners from abusing opioids intended for their pets.

© Todd Berkey /The Tribune-Democrat via The Associated Press

Some states are taking the war on opioids into veterinarians’ offices, aiming to prevent people who are addicted to opioids from using their pets to procure drugs for their own use.

Colorado and Maine recently enacted laws that allow or require veterinarians to check the prescription histories of pet owners as well as their pets. And Alaska, Connecticut and Virginia have imposed new limits on the amount of opioids a vet can prescribe.

Veterinarians typically do not dispense such widely abused drugs as Vicodin, OxyContin or Percocet, but they do dispense Tramadol, a painkiller; ketamine, an anesthetic, and hydrocodone, an opiate used to treat coughing in dogs – controlled substances that humans abuse.

But even as some states push for veterinarians to assess the records of human clients, many veterinarians maintain they’re unqualified to do so. And while a handful of states now require vets to check the prescription histories of pet owners, about two-thirds of the states explicitly prohibit it.

“I’m a veterinarian, not a physician. I shouldn’t have access to a human’s medical history,” said Dr. Kevin Lazarcheff, president of the California Veterinary Medical Association. California veterinarians have access to a state database with prescription histories and may check on pet owners before they prescribe for their animals, but they are not required to do so.

A veterinarian may be uncomfortable seeing alerts about his or her clients’ history with controlled substances prescribed by their physicians, said Lazarcheff, who lives and practices veterinary medicine in Oakhurst, California

And if the veterinarian suspects a client is abusing drugs, what then? “That’s an interesting point,” said Lazarcheff, because there’s no set protocol. The one time he suspected a pet owner of abusing drugs, his office called the local police.

“Where it went after that, I don’t know,” he said.

State prescription monitoring programs, or PMPs, allow physicians and other practitioners to check a patient’s prescription history. But at least 32 states do not require veterinarians to report any dispensing information on the PMP, according to the National Alliance for Model State Drug Laws.

In the pre-internet era, most states required veterinarians to mail in paper reports of narcotic prescriptions. When states switched to electronic systems in the early 2000s, veterinarians said their offices lacked the technology to comply, and many states removed the reporting requirement for vets, said Patrick Knue, director of the Prescription Drug Monitoring Program Training and Technical Assistance Center at Brandeis University.

The experiences of Maine and New Hampshire this year illustrate difficulties states face trying to stop the flow of drugs to drug abusers while respecting the role of veterinarians in health care.

Both states enacted laws requiring veterinarians to check the state PMP database before prescribing, but the New Hampshire Legislature repealed its law after veterinarians argued that their professional responsibilities did not extend to the human owner.

“Our patients are pets. They’re not abusing the medication. The owners are,” Dr. Jane Barlow Roy, past president of the New Hampshire Veterinary Medical Association, said.

Maine, which had 376 drug overdose deaths in 2016, a nearly 40 percent increase from 2015, has one of the most stringent laws in the country. It requires veterinarians to check the medical records of anyone seeking an opioid or benzodiazepine (prescribed for anxiety and insomnia) for an animal and to notify authorities if the pet owner has a questionable record.

But although veterinarians in Maine must check the database, they cannot enter prescriptions into the monitoring program. Only pharmacists are allowed to do that. So, a pet owner could still take a dog to multiple vets and get drugs at several offices without the drugs being recorded on the database, Maine’s State Health Officer Dr. Chris Pezzullo acknowledged.

Some critics say tougher reporting requirements for veterinarians aren’t needed because vets treat smaller animals than humans and the amount of drugs they prescribe is low. But Pezzullo said animal’s metabolisms are faster, so higher dosages are required, making a pet’s drugs appealing to desperate addicts.

Last year in Virginia, a dog owner took his boxer to six different veterinarians to get anti-anxiety pills and painkillers for his own use before he was caught. In a widely reported case from Kentucky in 2014, a woman cut her golden retriever twice with a razor so she could get drugs. And in the early 2000s, a man in Ohio taught his dog to cough on cue so the owner could get hydrocodone.

Such cases are believed rare, but authorities are working to cut off the supply of abused drugs. In Virginia, the Fairfax County Police Department recently published an educational brochure for veterinarians, explaining how to spot a “vet shopper.”

The Virginia Board of Veterinary Medicine issued emergency regulations in late June limiting the duration of prescriptions for controlled substances veterinarians and other providers may prescribe. A vet may prescribe a seven-day supply and another seven-day supply only after reevaluating the animal.

For chronic conditions lasting more than two weeks, the vet may prescribe an opioid for six months but must see and re-evaluate the animal before prescribing more.

The goal is to decrease the intentional diversion of drugs and decrease narcotics left over in people’s homes, according to Dr. David Brown, director of the Virginia Department of Health Professions.