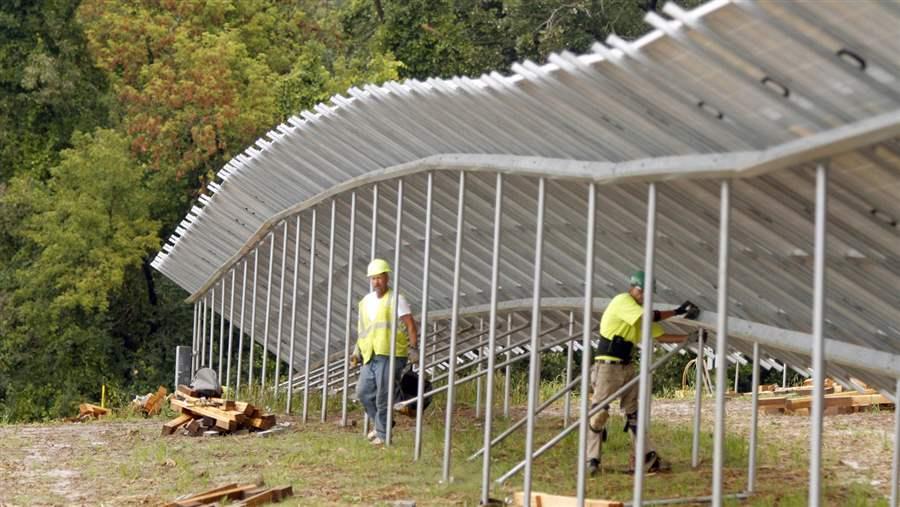 A solar garden in Red Wing, Minnesota. The shared solar sector is expected to grow rapidly in Minnesota and several other states over the next five years.

The number of U.S. homeowners who have their own solar panels has been growing steadily since 2000. But as that market slows, the industry’s focus is shifting to the huge swath of customers who can’t put panels on their own roofs.

Among them are renters, people who live in places where installation isn’t allowed or isn’t feasible, and those who simply cannot afford their own panels. For these would-be solar customers, the only option is to draw the power from panels set up elsewhere.

Traditional utility companies have until now driven much of the growth in these community solar, or shared solar, efforts. But while states have little control over whether utilities set up shared solar projects, many have been moving to open up the market to enable private companies, nonprofits, homeowners associations and others to develop and run community solar projects.

Across the U.S., lawmakers and regulators are determining the size and locations of projects, what types of organizations can promote and run them, and how best to ensure lower-income customers can participate.

Fourteen states and Washington, D.C., have laws enabling third-party community solar. And some 90 percent of the explosive growth in the sector in the next five years will take place in five of them that have taken early steps to encourage the industry: Colorado, Maryland, Massachusetts, Minnesota and New York, according to GTM Research, which studies solar power and other renewable energy.

Nevada nearly became the latest state to enable a community solar program, but Gov. Brian Sandoval, a Republican, vetoed legislation in June that he said could conflict with other solar-related laws, a point disputed by the solar industry and its advocates.

Lawmakers, regulators and solar advocates in a number of other states are interested in enacting legislation to spur their own community solar industries. But community solar is a new business model in a heavily regulated industry, and it can be painstaking.

“We’re talking about an open market for energy that, by and large, doesn’t exist yet,” said Jeff Cramer, executive director of the Coalition for Community Solar Access, a trade association. “It’s really a disruptive model.”

Community solar projects rely on solar panels that can be placed in many locations — vacant lots and brownfields; rooftops of parking lots, apartment complexes and other large buildings; even on out-of-use landfills.

And they are very small: no bigger than 1 or 2 megawatts, and often much smaller. By comparison, a typical coal plant has a capacity of 547 MW. One MW of solar energy can power 164 homes, according to industry estimates.

The projects are located within or very near the area they serve. Their customers, generally a mix of residential, industrial and commercial users, buy or lease part of the project and are usually credited through their bills for any electricity that is generated but unused.

Community solar offers an economy of scale that rooftop panels on residences do not, and as the costs of solar systems keeps dropping and the residential solar market slows in many states, it has become a focus for solar companies.

Third-party-led solar added about 85 MW in 2016, more than double what was added the previous year, and is expected to add 1.8 gigawatts between 2017 and 2021, according to a forecast by GTM Research.

There is no one single model for community solar. And that’s largely a good thing, according to Erica McConnell, a regulatory expert with the Interstate Renewable Energy Council (IREC), a nonprofit that provides technical and policy advice to state utility regulators.

“There’s not necessarily one right way to do it. There can be a lot of flexibility” in how community solar is structured, McConnell said.

Most states that have authorized third-party community solar programs set up basic regulatory structures and then let groups apply to participate.

Maryland took a more tentative approach, approving a three-year pilot program in 2015. Construction on the first projects should begin this year, with the Public Service Commission expected to parcel out 193 MWs of capacity over three years.

“The advantage is that we can hash out different things,” said Jon Kucskar, the senior adviser to Maryland’s Public Service Commission, which drew up regulations based on the goals and conditions set by legislation. “It gives us a chance to tweak things a little bit and not feel like anything we do has to last forever.”

Putting the pilot project into action was complicated because the legislation was ambitious and included a number of social and environmental goals. “The Legislature wanted a diversity of programs, not just a bunch of 2-megawatt plants on brown fields,” Kucskar explained.

The overarching principle guiding Maryland’s plan was straightforward. “This was a chance to make sure everyone can participate so solar power doesn’t just become a homeowner, elitist thing,” Kucskar said. To that end, the legislation required that nearly 30 percent of power generated through the program go to low- and moderate-income households.

The rapid growth of third-party solar last year, and the expected continued growth, is largely due to pent-up demand caused by a variety of regulatory missteps and delays, said GTM’s Perea and IREC’s McConnell. Many state public utility commissions have been slow in turning legislation into actual regulations — and some have made mistakes along the way.

As Minnesota’s efforts were taking off in 2015, for example, regulators underestimated the difficulty of connecting solar gardens to the grid, Perea and McConnell said.

Minnesota just cleared that logjam last year and its community solar construction program is picking up and is expected to grow more robustly through this year and next, reaching an estimated 285 MWs, GreenTech reports.

But GreenTech expects new construction to drop off sharply in 2019, because solar bill credits are not considered attractive enough to draw large numbers of subscribers.

Interconnectivity will grow more cumbersome and complicated as states consider allowing community solar projects to grow larger and be further away from their intended service areas, solar advocates warn. And it is just one of the issues that states need to consider as they write community solar laws and regulations.

For many years as solar gained a foothold in the market, most states required utilities to buy back excess power at the same retail rate customers paid for it, so-called net metering.

But as solar grew from a novelty to a more popular energy source, utilities and others complained that the high retail rate did not reflect the true costs associated with providing connections and electricity to solar customers. They argued that those costs were shuffled on to non-solar customers.

States have begun trying to address those complaints by using different ways to value that excess energy, but advocates for solar warn that setting credits for community solar customers too low could stifle growth.

However, she added, there was enough of an uproar for the utility commission to begin looking into ways to increase the size of the credits.

“The bill credit, valuation process can be really challenging. … That process can drag down program implementation,” McConnell said. “You have to get it right for the program to be successful.