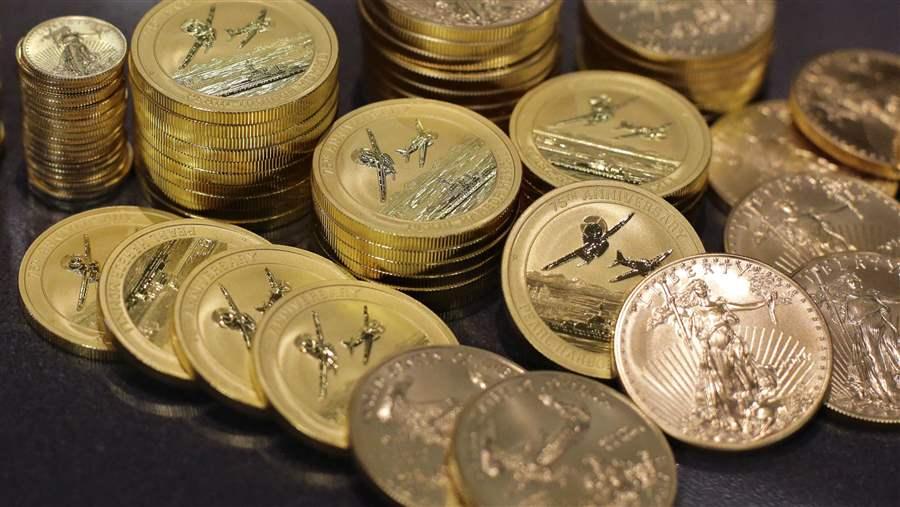 Thirty-one states have eliminated part or all state sales taxes on transactions involving silver and gold coins, giving them the same tax status as transactions in dollars.

By the end of the year, Texas plans to open the nation’s first state-supervised gold and silver depository, allowing ordinary Texans, as well as businesses, banks and others, to store their precious metals, and use the holdings in their account to make electronic payments.

“The idea of a Texas Ranger on horseback guarding the gold conjures up the sense that whatever happens, Texas will look out for your treasure,” said Chris Bryan, spokesman for the Texas Comptroller of Public Accounts.

The whole scene may sound like something from an earlier era. But it’s part of a growing, modern movement across the United States, brought on by economic anxiety and distrust of the Federal Reserve, to make gold and silver legal tender.

Since 2003, lawmakers in 27 states have considered bills to recognize gold or silver coins issued by the federal government as legal tender or to authorize a precious metals bullion depository in the state, according to the National Conference of State Legislatures. So far only Utah in 2011, Oklahoma in 2014 and Arizona this year have recognized gold and silver coins as legal tender, while Texas in 2015 and Tennessee last year approved measures allowing bullion depositories.

The financial crisis of 2008 and 2009 appears to have spurred interest in such “sound money” legislation, according to William L. Greene, an assistant professor of political science at South Texas College. Greene, who has studied the bills, pushed a proposal in Georgia that would have bound the state to Article I, Section 10 of the Constitution, which states that “No State shall ... make any Thing but gold and silver Coin a Tender in Payment of Debts.”

States have taken other steps that may encourage people and businesses to think of precious metals as a viable alternative to the paper dollars issued by the Federal Reserve and not just as a collector’s item. Thirty-one states have eliminated part or all state sales taxes on transactions involving silver and gold coins, giving them the same tax status as transactions in dollars, according to the Industry Council for Tangible Assets, which works with coin dealers to pass exemption laws.

Illinois, California and Washington state began lowering sales taxes on coins and precious metals in the late 1970s. The trend has picked up steam since 2010, said Kathy McFadden, executive director of the tangible assets group. Louisiana reinstated almost all of its sales tax exemption this year, while Minnesota and North Carolina approved exemptions, and Virginia expanded its exemption.

In Utah and Oklahoma, people can now transact business with like-minded gold enthusiasts. Anyone in any state can open a self-directed IRA with physical gold, but proponents believe more people will do so in states that put gold and silver coins on a par with paper money. Gold-backed trading accounts are available in Utah, and gold-backed debit cards will become commonplace, proponents say.

But even in those states, you can’t necessarily buy a steak dinner with a couple of American Eagle gold coins, because the state doesn’t compel merchants to accept gold or silver coins instead of dollars.

In Utah and Oklahoma, the tax collector doesn’t want them either. A Utah man tried to pay his taxes with silver soon after the law went into effect, but, said State Treasurer David Damschen, “That’s not how it works. If you owe $500 in taxes and you walk in here with two sheep you say are worth $500, we aren’t going to take them either.”

But over time, Greene said, as residents use both bank notes and silver and gold coins, the fact that the coins hold their value more than paper dollars “will drive out ‘bad’ money.”

In Utah, Jonathan Johnson, the chairman of Overstock.com and a 2016 Republican gubernatorial candidate, in 2015 said his company had stockpiled enough small coins in gold and silver to pay employees for several months in case of bank failures or currency problems.

Alabama, Idaho, Kentucky and Tennessee were among the states that considered tax exemption bills this year. A bill in Utah proposed requiring the state to hold physical gold reserves in a state repository, and one in New Hampshire would have mandated that state legislators receive their annual $100 payment in silver dollar coins. The state treasury noted that while the face value of a silver dollar was $1, the spot value of the coins varies and was $16.47 in January.

Gold as legal tender has long been regarded as a fringe issue, championed by former U.S. Rep. Ron Paul of Texas. But dedicated lobbyists, Tea Party activists and businesspeople have persevered.

In 2013 Kasich said, “There is no reason to provide preferential treatment to one class of items and not others that could possibly increase in value, such as art, sports cards, or antiques. Therefore, this veto is in the public interest.”

A spokesman for Kasich said the bill he signed was more narrowly drawn and had widespread support in the Legislature.

The measure is expected to cost Ohio from $4.3 million to $5.7 million in lost sales tax revenue this year.

In Indiana last year, then-Gov. Mike Pence, a Republican, also signed a bill eliminating sales taxes for silver and gold coins and bullion. That measure was estimated to cost the state about $1.5 million in revenue a year, although the estimate could be low, budget analysts said.

Some states were unprepared to assess how much the measures will cost.

Oklahoma previously lumped together gold jewelry and coins in reporting sales tax revenue and couldn’t separate the two to estimate the cost of the 2014 law that exempted gold and silver bars and coins from sales tax, said Tony Mastin, executive director of the Oklahoma Tax Commission.

Oklahoma plans a review of all the tax exemptions next year, but Mastin does not expect the revenue lost because of the gold and silver tax break to be consequential.

“There are not a lot of sellers of gold coins and bars in the state,” he said.

“Arizona law now recognizes that, in the state, U.S. Mint coins are legal tender that can be exchanged for Federal Reserve notes,” said state Rep. Mark Finchem, the Republican who sponsored the bill.

“If a housekeeper chooses to receive silver instead of Federal Reserve notes, that’s her choice,” Finchem said. “The note is disconnected from anything of real value.”

But Arizona state Sen. Steve Farley, a Democrat who’s running for governor, called the tax break a giveaway to coin collectors. “It disadvantages all other forms of investment — and only coin collectors benefit.”

Republicans have long wished for a return to the gold standard, which fixed the price of the dollar to a specific amount of gold. President Richard Nixon ended the final vestiges of the gold standard in 1971. President Ronald Reagan had a commission to study the issue but decided against a return. He signed legislation authorizing the mint to produce gold and silver coins starting in 1986.

Gold enthusiasts argue that gold holds its value when the dollar is buffeted and the economy tanks, although its price can and has dropped. The mint’s coins vary in price weekly.

“Gold is the most stable thing in the economic world right now,” said Keith Weiner, president of a precious metals firm and of the Gold Standard Institute, which promotes the use of gold as currency. “Some way, somehow, someday we will have a gold standard.”