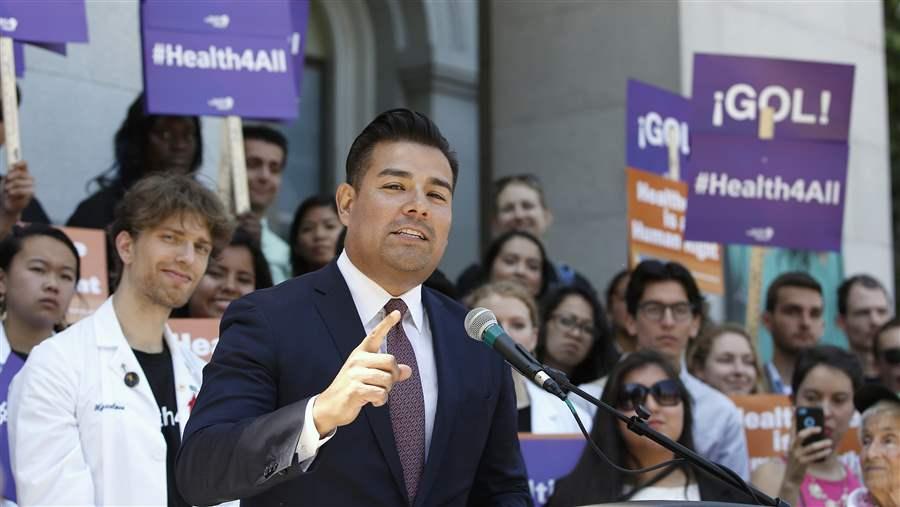 When Dolores Loaeza was a baby and she needed medical care, her mother could call her pediatrician in Mexico for free advice, and, if needed, to send medication across the border to Los Angeles.

As an immigrant without legal permission to be in the country, Dolores was not eligible for full Medicaid coverage. When she got older, her mother, Wendy Pech, would have to scrape together the money to pay for Dolores’ medical expenses out of pocket. “I took extra precautions to make sure Dolores didn’t get sick or injured because we couldn’t afford those bills,” she said through a translator last week.

Those precautions are no longer necessary. Last year, California extended full Medicaid benefits to child immigrants, no matter their immigration status, if their families otherwise meet the income thresholds for the joint federal-state health insurance program for the poor and disabled. Dolores, now 17, is enrolled.

Oregon just followed suit, joining the five other states plus Washington, D.C. that extend Medicaid health benefits to children living in the country illegally. Immigration advocates welcomed the news, but with the Trump administration cracking down on illegal immigration, they don’t expect to see similar laws enacted in other states in the near future.

“When it comes to covering kids here illegally, there aren’t that many more states that are going to join that camp and a fair number of states that are definitely in the other camp,” said Randy Capps, research director of the Migration Policy Institute, a Washington think tank that studies migration in the United States and abroad. 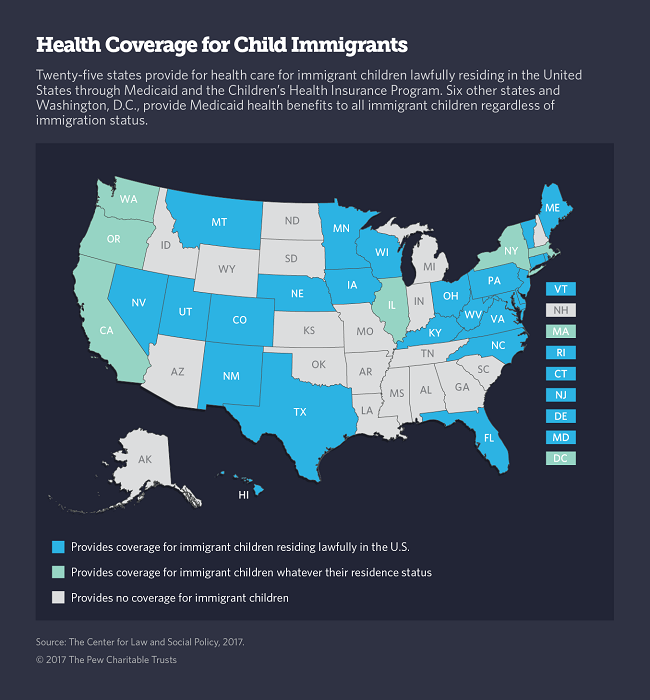 Still, advocates regard the victory in Oregon and elsewhere as significant, certainly for the estimated 15,000 immigrant children in Oregon who are expected to become eligible for health care under the new law.

The financial commitment for the state in enacting the law is considerable because it will not come with the federal Medicaid matching funds available to legal residents. Oregon must pick up the entire tab, which is estimated to be more than $36 million for the first two years and $55 million for every two years after that. Oregon officials say that because there is no federal match, the children will not technically be Medicaid beneficiaries. But the program will be administered by the state Medicaid agency and the benefits will be the same.

“It was an incredible testament to the commitment to human rights and children’s rights that we made that financial commitment in a year when we had tough budget decisions to make,” said Tonia Hunt, executive director of Children First for Oregon, one of the advocacy groups that pushed for the legislation.

The bill, one of Democratic Gov. Kate Brown’s legislative priorities this year, passed handily with Democratic and some Republican support. Brown said the measure was in line with her goal of achieving health coverage for all in Oregon. In particular, said Jeremy Vandehey, Brown’s health policy adviser, “The governor believes these children deserve full access to health care so they can be healthy and in the best position to succeed in life.”

The measure did draw some opponents, however.

“We have a state government that basically puts the rights of people illegally here above the rights of American citizens,” said Jim Ludwick, communications director for Oregonians for Immigration Reform, which backs more restrictive immigration policies. Ludwick said that it was unfair to ask Oregon taxpayers to pay for health care for children living in the country illegally. If they need medical services, he said, they could continue to get it at free clinics and in hospital emergency rooms.

Twenty-five other states, including Florida and Texas, both with large immigrant communities, allow immigrant children with legal residency to access Medicaid, and those states are entitled to matching federal Medicaid dollars.

But the bigger need, advocates for immigrants say, is for children without legal residency, whose family incomes are often low enough to otherwise qualify them for Medicaid. The Migration Policy Institute estimates about a million foreign-born children are living in the country illegally.

A large chunk of them live in California, which implemented a law similar to Oregon’s in 2016. As of early June, nearly 200,000 children under 19 were enrolled in Medicaid under the law.

Not all of those enrollees were completely new to Medicaid. Even before the law, immigrants without legal permission were entitled to “limited scope” Medicaid coverage, essentially for emergency medical services only. About 120,000 children were already enrolled in that program. They have now been rolled over to “full scope” Medicaid coverage along with about 80,000 new enrollees. Gov. Jerry Brown, a Democrat, budgeted $440 million for the program this year.

“These benefits give parents great peace of mind and a measure of financial security,” said Mike Odeh, director of health policy for Children Now, a child advocacy organization in the state that lobbied for the legislation. Many of the parents of those children are themselves without health insurance, Odeh said.

Odeh acknowledged that parents in the country illegally might be reluctant to enroll their children in Medicaid out of fear that it could identify their families to immigration officials and subject them to deportation.

Families felt apprehensive about jeopardizing their immigration status if they signed their children up for the health coverage, a Children Now survey of medical providers who serve immigrant communities confirmed this year.

“I think it’s a real sentiment given the rhetoric of [the Trump] administration,” Odeh said. But he said immigration rights advocates are trying to reassure immigrant communities that information won’t be made available to federal immigration officials and he hasn’t seen evidence that parents are staying away from the program.

Wendy Pech, Dolores Loaeza’s mother, does outreach work for Clínica Romero in Los Angeles, going door to door to sign people up for health benefits, including California’s Medicaid program for kids in the country illegally. Many people are afraid to enroll their children because of their immigration status, she said. But she tries to reassure them.

“I trust my community clinic, that they won’t turn any information over to ICE,” she said. “That’s what I tell the people.”

The Brown administration has given the same assurances, but Odeh said those promises may not be ironclad, given the climate in Washington. “I think with so much uncertainty about how the feds are handling immigration, it’s hard to say with 100 percent certainty that there won’t be any consequences in any case.”