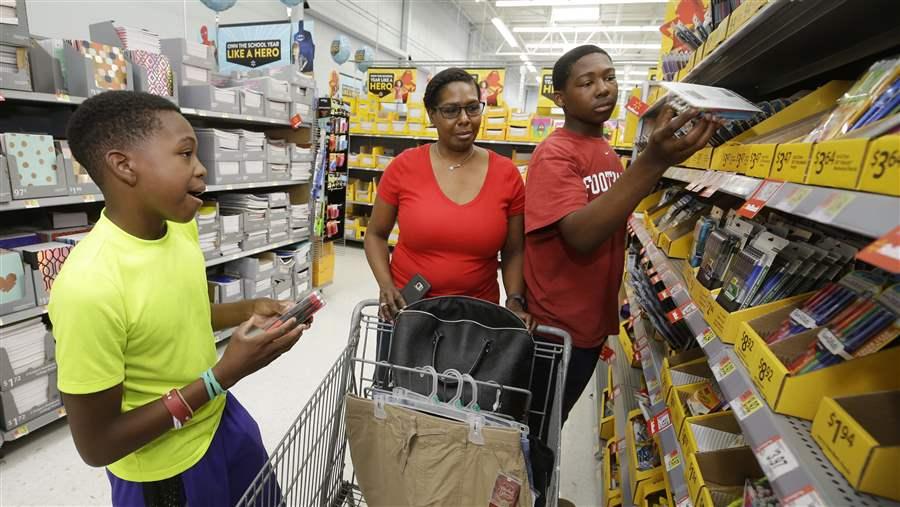 Shoppers in Texas look at school supplies. Texas still has a sales tax holiday, but other states have scrapped theirs or cut them back in recent years.

Consumers in 16 states can take advantage of sales tax holidays this year—going on frenzied shopping sprees to buy items such as backpacks, computers and school clothes tax-free. But states confronting budget woes and a long list of spending priorities are questioning whether the hyped-up shopping events are worth the cost.

Left-leaning critics say the holidays are regressive and cost states money that could be spent on other priorities. Right-leaning groups agree that they are regressive, and argue that they don’t attract new business for retailers. Instead, they say, the holidays just concentrate buying into a single weekend.

For more than a decade after New York started the modern trend in 1997, the number of states with annual sales tax holidays grew steadily. But the count peaked at 19 in 2010, and this year’s tally is one fewer than last year. The liberal Institute on Taxation and Economic Policy estimates that states lost $300 million due to sales tax holidays in 2016.

The holidays spark buying sprees and big advertising campaigns. For a few days this month in Texas, shoppers can buy backpacks worth up to $100 without paying sales tax. In Missouri, graphing calculators get the tax-free treatment this weekend, and in Virginia, it applies to generators, chainsaws and other hurricane preparedness items, along with school supplies.

But despite the excitement, for many states the numbers are not adding up.

Charley Ballard, an economics professor at Michigan State University, said two closely related factors may have helped to “take the shine off” sales tax holidays. Lawmakers are feeling pressure from their constituents to do things that require money, Ballard said. At the same time, the holidays haven’t unleashed the promised burst of economic growth.

Georgia lawmakers voted this year to scrap the state’s July sales tax holiday, which applied to clothes, school supplies and computers. Massachusetts, which gave up its holiday in 2016, rejected efforts to reinstate it this year in the face of a budget deficit. Republican Gov. Charlie Baker this week filed legislation to designate a tax-free weekend in August, but House and Senate leaders are opposed to the idea, so Baker’s proposal is unlikely to advance.

In Florida, Republican Gov. Rick Scott’s plan to expand the sales tax holiday from three days to 10 was rebuffed by the Legislature. In Wisconsin, Republican Gov. Scott Walker’s plan for a two-day holiday was scrubbed by lawmakers in favor of eliminating the personal property tax for businesses. In Oklahoma, the sales tax holiday for school clothes and shoes was on the chopping block to help close a budget deficit, but survived by one vote.

In Georgia, retailers fought hard to keep the holiday in place. But “policymakers came around to realizing that the benefits of the sales tax holiday didn’t outweigh the cost,” said Wesley Tharpe, research director of the Georgia Budget and Policy Institute, a progressive group.

Most consumers saw only modest savings at the register, Tharpe said. But the state lost out on $42 million in taxes in fiscal 2016, according to Georgia State University researchers.

Advocates for the holidays, led by retailers, argue that they bring in shoppers who buy not just the items that are tax free, but lots of other “impulse” items that are not. And, they argue, the holidays help level the playing field for brick and mortar retailers who face stiff competition from online sales, many of which are tax exempt.

“The sales tax holiday has given us a two-day equalizer,” said Bill Rennie, vice president of the Retailers Association of Massachusetts. “Consumers have responded.”

Tax holidays in many states are limited to clothing or schools supplies. But in Massachusetts, the holiday applied to purchases of a wide variety of items, and Rennie said the weekend was the biggest of the year for retailers, surpassing Black Friday. “It was very important to folks especially in the furniture, appliances, electronics and jewelry businesses,” he said.

But for lawmakers looking for ways to plug an estimated $430 million budget hole, those arguments weren’t convincing.

“This is the kind of policy that makes a great press release, but isn’t necessarily good economic policy,” said Ballard. “Who could be against sales tax holidays so that little Susie can buy her pencils without having to pay sales tax? But like any tax gimmick … you give a tax break to somebody, you are going to lose revenue.” 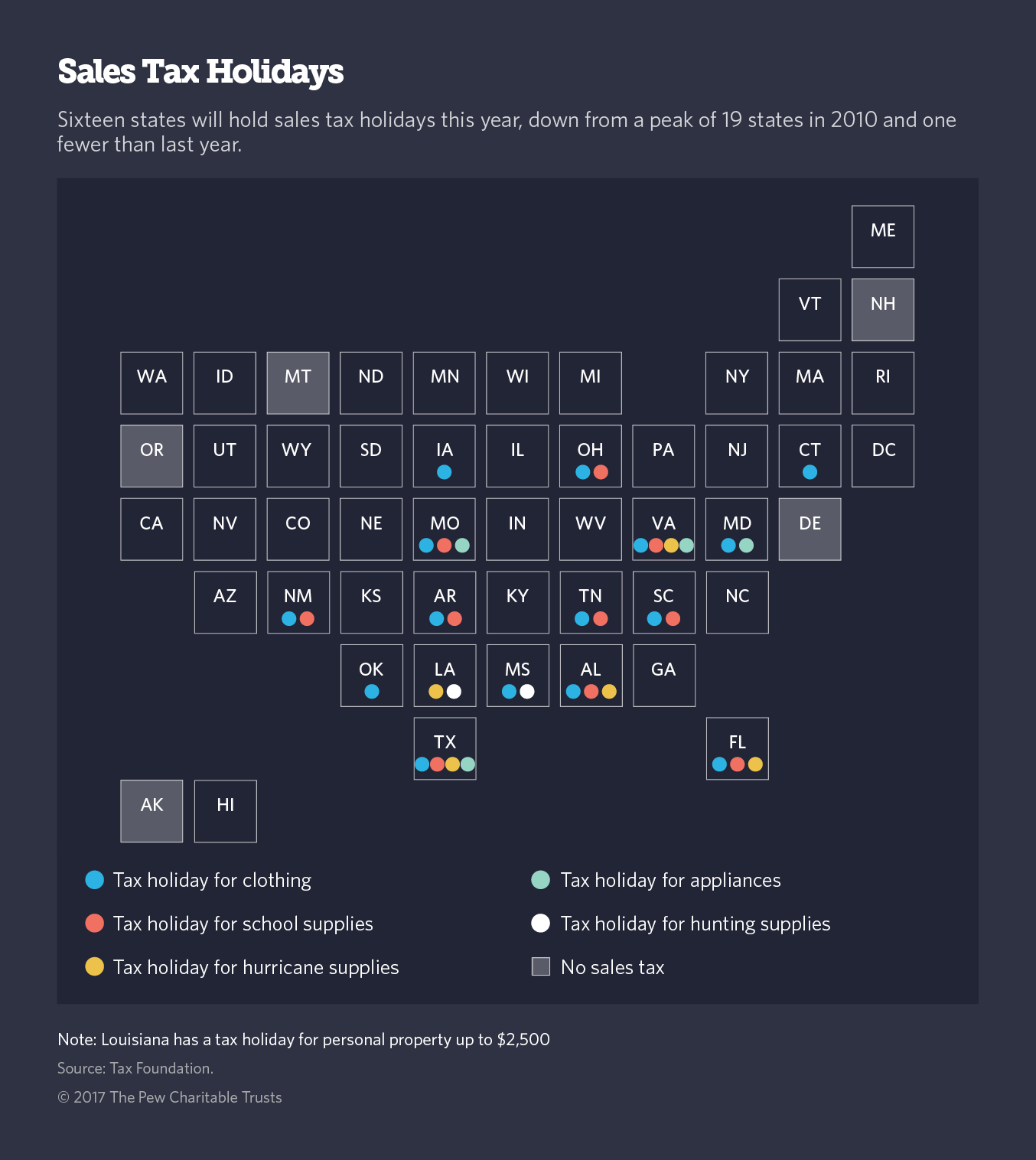 The liberal ITEP group says sales tax holidays are inherently unfair because they favor better-off consumers who can shift purchases to holiday times, while lower-income, paycheck-to-paycheck folks can’t do that.

A study by the Federal Reserve Bank of Chicago in 2010 found that households with married couples with young children earning more than $30,000 are the only ones that “statistically significantly increase consumption” during sales tax holidays.

The Tax Foundation, a right-leaning think tank, agrees that the holidays don’t effectively target tax relief to low-income individuals. In a report last month, the group also complained that the holidays allow politicians to arbitrarily pick which products and industries to favor with the exemptions, and are a distraction from comprehensive tax relief.

Some critics contend that consumers might save even more without the holidays, as retailers would mount sales of their own timed to events such as back-to-school.

Bill Fox, director of the Boyd Center for Business and Economic Research at the University of Tennessee, said he took advantage of Tennessee’s recent holiday to buy several pairs of running shoes. “That 9 ¼ percent I saved is minuscule in terms of ‘savings,’ ” he said. “The stores would be giving a much better discount if they had a sale. Back-to-school sales would have been like 25 percent off, not 9 percent, and people would have saved more.”

In Georgia, lawmakers decided during this year’s legislative session not to renew the state’s sales tax holiday, but did find other products and industries to favor.

Rep. Jay Powell, the Republican chairman of the House Ways and Means Committee, said he did not encourage renewing the holiday “because I don’t think that it accomplishes any useful purpose.” People are going to buy what they buy, regardless of the holiday, he said, pointing to a Georgia State University study that said people who were able to do so just “bunched their purchases into one weekend, that would have normally been spread over the summer.”

While deciding not to renew the sales tax holiday, the Legislature did vote to add new tax credits and expand existing ones, which Powell said will provide more jobs in the state. And more jobs, he said, means more money in the pockets of Georgians to purchase more goods, with or without “holidays.”

Georgia extended the state’s film tax credit to include post-production work, including editing and music production, and capped the expenditure at $5 million next year, $10 million in 2019 and $15 million from 2020 through 2022. And the Legislature implemented a “rural markets” tax credit program, estimated to cost $60 million over six years, that backers say will create jobs in rural parts of the state that are losing population.

Retailers in the state were disappointed by the move. “This is not allowing consumers an opportunity to save some money and is hurting retailers by not having this very popular weekend,” said James Miller, communications director of the Georgia Retail Association.

Miller suggested that Georgia residents who live near states with a sales tax holiday, including Florida, Alabama and South Carolina, would simply drive over the border and shop there.

The cross-border issue also came up in Massachusetts, since neighboring New Hampshire doesn’t have any sales taxes.

“Daily reminder to Massachusetts shoppers that every day is a Sales Tax Holiday in New Hampshire! #VisitNH.”