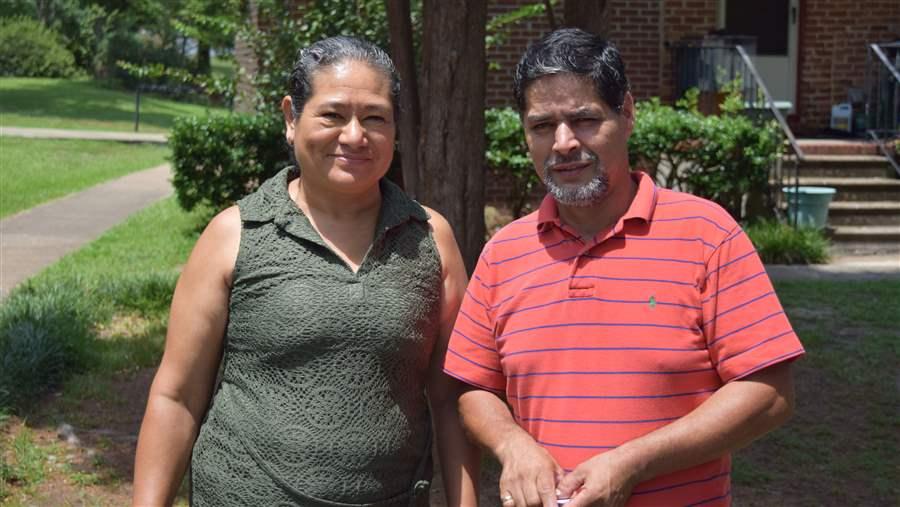 “People got scared,” said Noel Mendoza, right, with his wife Mildred, of the Hispanic immigrants who left Barbour County, Alabama, after approval of a 2011 state law cracking down on unauthorized immigration. Most of the counties that have lost Hispanic population are in the South.

“People got scared,” said Noel Mendoza, who came here from Mexico about 17 years ago. “They thought they were going to get rounded up and put in jail.” Friends in the tightknit community disappeared overnight, leaving homes full of furniture and cars in driveways, Mendoza and other residents said.

The law, intended to “stem and reverse the flow of illegal aliens into Alabama,” made it a crime to be an undocumented immigrant, or to transport, hire, or rent housing to one. Experts and community leaders say it’s the main reason there are fewer Hispanics here than there used to be.

The biggest drop came here in Barbour County, about 80 miles southeast of Montgomery, where 21 percent of the 1,387 Hispanic residents in 2010 were gone by 2016, according to a Stateline analysis of U.S. Census estimates.

Outside the South, New Mexico and Colorado dominate the list of counties where the Hispanic population declined. Those were traditionally Hispanic counties in northern New Mexico and eastern Colorado, according to a Pew Research Center study, and people are leaving in search of more economic opportunity. (The Pew Charitable Trusts funds the Pew Research Center and Stateline.)

The reasons for the scattered losses in the South may be similar to the perfect storm that hit Barbour County in 2011: a tough immigration law, including a provision requiring employers to screen workers’ legal status using the federal E-Verify program, and a Hispanic community that included many undocumented immigrants who were not well organized or able to defend themselves.

Laws aimed at illegal immigrants were enacted around the same time in Alabama, Georgia and South Carolina.

“Alabama’s was the most far-reaching, and as a result many people just disappeared,” said Naomi Tsu, who has worked on legal challenges to state immigration laws in Southern states for the Southern Poverty Law Center (SPLC).

A federal court struck down much of Alabama’s law in 2012, including requirements that schools check the immigration status of students and parents, and bans on rentals to undocumented immigrants. The court also threw out a provision that made illegal immigration a state crime, punishable by 30 days in jail and a $100 fine, and gave state and local police the power to request a green card from anybody as proof of legal status.

Many of the other counties where the Hispanic population declined share similar characteristics with Barbour County, Tsu said, including largely undocumented immigrant populations and employers such as poultry processing plants and sawmills that require hard work for relatively low wages.

“The businesses that hire most of the people started asking for papers and they couldn’t produce them,” Mendoza said. “They went back to Mexico or sometimes California or New York, where they help Hispanics.” 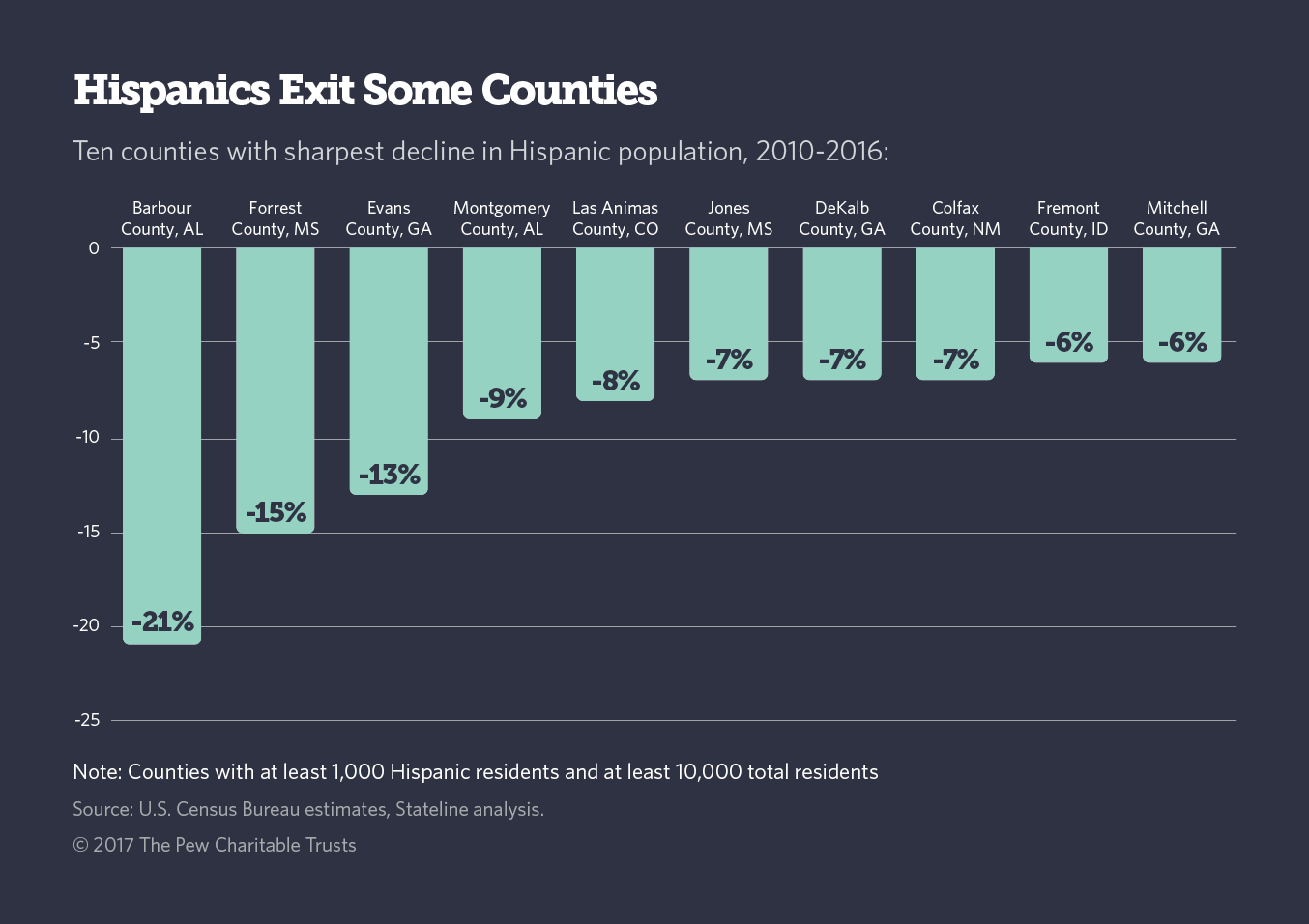 In most cities in the South, the Hispanic population has been increasing. But some urban areas have also seen decreases.

But nearby in Gwinnett County, the Hispanic population grew 17 percent and the county just elected its third Hispanic state representative, Brenda Lopez of Norcross.

Soon after Pedro “Pete” Marin, a state representative from Duluth, was first elected in 2002, an ethics complaint was filed against him, charging that he was an agent of the Mexican government.

“I defended myself. I went to the ethics board and I said, ‘Hey, first of all I’m from Puerto Rico and second, I’ve never been to Mexico,’ ” he said.

But Marin, who spoke out against the E-Verify law, knows it’s not like that everywhere in the state. “Georgia needs immigrant labor to keep the economy growing,” he said. “Where are they going to come from?”

Georgia’s Chatham County, which includes Savannah, saw Hispanic growth dwindle a few years ago. Attendance fell at Hispanic outreach programs at the Savannah YMCA and its director complained that many Latinos were moving to “friendlier places.”

“People didn’t like the way they were treated and they started moving out,” said Alfonso Ribot, president of the Metropolitan Savannah Hispanic Chamber of Commerce.

Some of his members lost hundreds of employees overnight in fast-food and other service jobs, because the E-Verify law took effect and some immigrants started moving away.

In Barbour County, where the workforce is aging and school enrollment is declining rapidly, officials have tried to reassure immigrants that they’re welcome.

An exodus of young Hispanic families could help explain a school board report that said hundreds of babies born in Barbour County in 2006 never enrolled in public school in 2012.

The U.S. Department of Justice investigated whether the Alabama law violated the rights of all children to attend school without discrimination, as part of the lawsuit that overturned parts of the law. Statewide about 13 percent of Hispanic students withdrew from school in the months following the law, according to the investigation.

The SPLC got as many as 1,000 calls a week from immigrant parents in Alabama seeking advice about their children after the law passed, Tsu said.

“It was absolutely heartbreaking because they all had the same question,” Tsu said. “These were mothers asking how they could set up guardianship for their children if they were suddenly deported.” 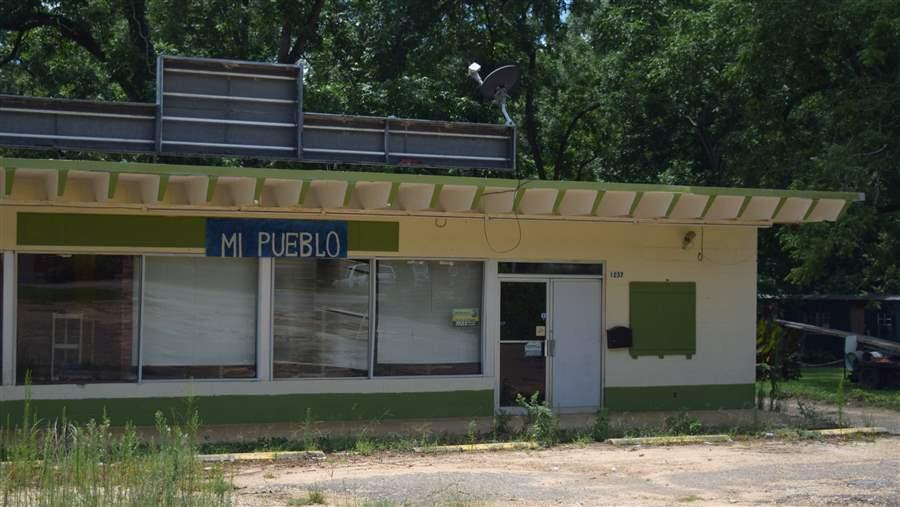 An abandoned store in Clio, Alabama, where surrounding Barbour County lost 21 percent of its Hispanic population between 2010 and 2016.

‘We Decided To Stay’

Holy Redeemer Catholic Church in Eufaula draws about 75 people to a monthly Spanish-language Mass, using missals emblazoned with an image of the Virgin of Guadalupe, Mexico’s patron saint. In 2011, Father David Shoemaker said, “We lost about half the people in a matter of two weeks. But it’s been stable since then.”

Once the more frightening parts of the Alabama law were struck down, some people returned, but not many, residents said.

An equipment operator from Chiapas, Mexico, said he thought of leaving with his wife and two young sons.

“We decided to stay. As long as you follow the law, you’re okay,” the man said, as his wife shopped for Mexican chayote squash at a local market and his sons nibbled frozen fruit bars known as paletas.

It’s not unusual for those who rode out the passage of immigration laws in the South to be glad they did, said Randy Capps, research director for the nonpartisan Migration Policy Institute, despite new crackdowns and threats under the Trump administration.

“Some people left but by and large the ones who stayed are doing okay,” said Capps. “There are towns across the Southeast that are very dependent on immigrant labor, and the demand for them is high.”