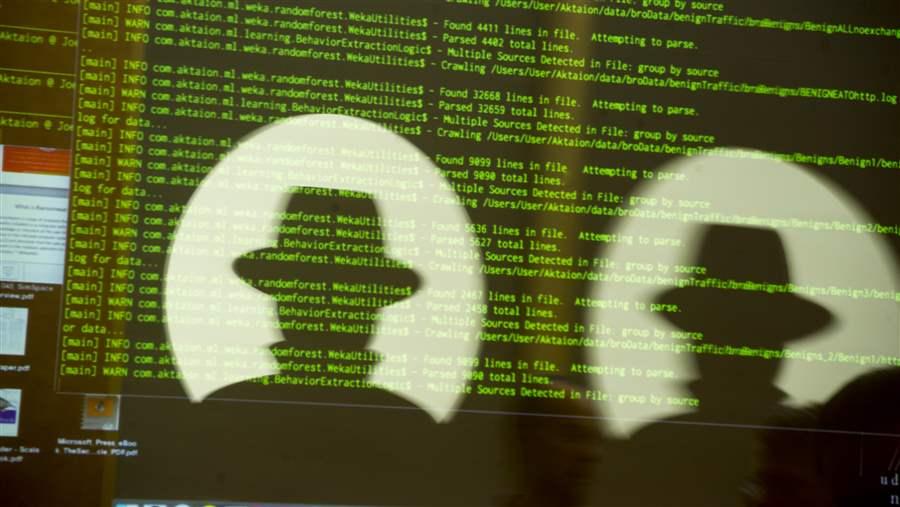 A code is displayed at the Black Hat cybersecurity conference in Las Vegas last year. Michigan has created a volunteer cybersecurity team to mobilize if a massive cyberattack strikes the state.

For three years, a team of highly trained volunteers from the public and private sector has been standing by in Michigan, ready to spring into action and provide technical assistance if the state gets hit by a massive cyberattack.

But despite a steady stream of smaller-scale breaches, the Michigan Cyber Civilian Corps, MiC3, has yet to be deployed. Now, as states grapple with a growing threat of sophisticated hacks and struggle to hold on to cybersecurity experts, Michigan lawmakers are considering a measure that would make it easier to call on the corps and would expand its reach so it can help state and local governments, nonprofits and businesses across the state.

Michigan officials say they hope their volunteer corps of cybersecurity experts from government, education and private industry, believed to be the first such group in the U.S., can serve as a national model. They liken it to volunteer firefighters.

“These are the guys who come in while the house is burning,” said Paul Groll, Michigan’s deputy chief security officer who oversees the team. “They can help stop the damage and try to find out what the bad guys are doing and kick them out as soon as possible and set up the victim for a successful recovery.”

And other states are taking notice. Officials in Michigan say they have been contacted by more than a dozen of them. Hawaii is thinking of setting up a team, and sent a staffer to visit the program earlier this year. Montana is planning on doing the same this fall. Washington state considered launching a corps like Michigan’s but decided instead to set up a team of existing trained staff to assist state and local government agencies during a major cyberattack.

But the Michigan corps has its limitations. While it is managed by the state Department of Technology, Management and Budget, it is not part of the agency so its volunteers don’t have the same legal protections as state employees.

And it has yet to be deployed because it can be activated only if the governor declares a state of cyber emergency, which hasn’t happened. When hackers targeted the state’s main website last year, knocking it briefly offline to draw attention to the Flint water crisis, for example, the governor didn’t consider it an emergency so the corps wasn’t activated.

State officials are hoping the Legislature will pass the bill to broaden the team’s reach and establish it in statute. The House passed the measure overwhelmingly last month, and it is now in a Senate committee.

Information technology experts say this could help boost cyber defenses not only for state government, but for cities, counties, school boards, police departments and small businesses that may be victimized in lower-level or non-emergency incidents.

“These smaller organizations need help,” said Dan Lohrmann, chief security officer for Security Mentor, a national security training firm that works with states. “And this can help younger cyber pros get hands-on experience and grow the overall pool of cyber talent in Michigan.”

Michigan Gov. Rick Snyder, a Republican, came up with the idea for the corps in 2013 as a way to boost the state’s ability to rapidly respond to large-scale cyberattacks, such as those striking the electric grid or transportation networks. The following year, the state’s technology department, working with the Michigan State Police and the Michigan National Guard, launched the program with 33 volunteer recruits. Today, that number has grown to 59.

This year, the department allocated $300,000 for the corps out of its $20 million cybersecurity budget. Some of it pays for a project manager and program coordinator, both part-time, but most is spent on training, Groll said.

Corps members come from a variety of industries, including energy, defense and transportation, but all of them are vetted thoroughly. They must be Michigan residents with at least two years of professional cybersecurity experience and be certified by a global certification organization. They are required to pass a series of tests to demonstrate their knowledge and forensics skills and must provide a letter from their employer allowing them to participate and authorizing them to devote up to 10 days a year to the volunteer job.

“It’s a very innovative approach,” said Doug Robinson, executive director of the National Association of State Chief Information Officers (NASCIO). “This is different than saying we need volunteers to fill sandbags. They are tapping into the expertise of people who can help protect our critical infrastructure as cyber threats continue to become more sophisticated.”

In recent years, hackers and cybercriminals have been relentless in targeting state and local government networks, which contain information such as Social Security, bank account and credit card numbers on millions of people and businesses.

State IT officers, who are increasingly concerned about sophisticated efforts to breach their systems, in 2016 ranked cybersecurity as their top priority for the third year in a row, according to NASCIO and the consulting firm Deloitte & Touche LLP.

And it’s not just state officials who are affected. Nearly a third of local government chief information officers reported increased cyberattacks during the past 12 months, according to a 2016 survey by the International City/County Management Association.

“The bad guys are constantly looking for new data sets or government systems to take down,” said Timothy Blute, a program director of the National Governors Association’s homeland security division. “It’s no longer a simple IT problem. More and more citizen services are being moved to the internet. Every time that happens, they become a target.”

At the same time, Blute said the public sector is struggling with a shortage of qualified cybersecurity professionals. And states are facing serious problems hiring and retaining IT staff, especially cybercrime experts. Salaries generally can’t match those in private industry, and it’s often hard to move up the ladder in state government. Creating a civilian cyber team like Michigan’s can help states beef up that expertise, Blute said.

Last month, the state logged 6 billion cybersecurity “events,” including probes by would-be intruders and attempted attacks, according to Groll. That was double the number from a year ago.

Paul Dumbleton, security engineering manager at Perrigo, a manufacturer of generic over-the-counter medicine, said he joined the corps nearly three years ago, partly to give back to the community.

But, he said, it’s also been beneficial for himself and for his company. He has networked with cybersecurity professionals in other industries and improved his skills through training and mentoring. And he has used that knowledge to offer cybersecurity presentations at his church and a local Boy Scouts troop meeting.

“Financial institutions have some of the best IT security people. They can bring new ideas and innovation to the states,” he said. “And it can be an eye-opening experience for companies, which don’t have the broad scope of responsibility that states have, everything from transportation to human services.”

Michigan officials admit it’s a challenge keeping all their cyber volunteers on board, considering they haven’t actually been deployed. They try to engage them by requiring them to undergo intense training and exercises, attend quarterly meetings around the state, and participate in a monthly conference call.

Another sticking point is that corps members don’t have protection from lawsuits if they give advice or make a decision that inadvertently causes harm. The proposed legislation addresses that by including a good Samaritan clause that would provide the volunteers with civil immunity.

Dumbleton, the corps volunteer, said adding such protection is important for the team.

“We’d be going into an organization where we have no idea how their network is set up or what type of information they have,” he said. “If we find something and suggest they make a change and it breaks something within their network, if we’re held responsible or liable for that, we’ll lose a lot of members because we’re volunteers.”

State Rep. Brandt Iden, a Republican and sponsor of the Michigan bill, said offering immunity and broadening the corps’ scope would help not only with retention but with recruitment. He said the legislation also would allow local government agencies, nonprofits and small businesses to tap into expertise they may not already have.

School district officials who think their network may have been hacked, for example, could contact the state technology department, which could dispatch corps volunteers for up to a week to assess the threat and recommend a plan of action. The volunteers would supplement, not supplant, the private IT security contractors often hired to fix such problems, he said.

“By expanding the corps’ reach beyond just emergencies,” Iden said, “it will give these people an opportunity to roll up their sleeves and get in there and make a difference.”