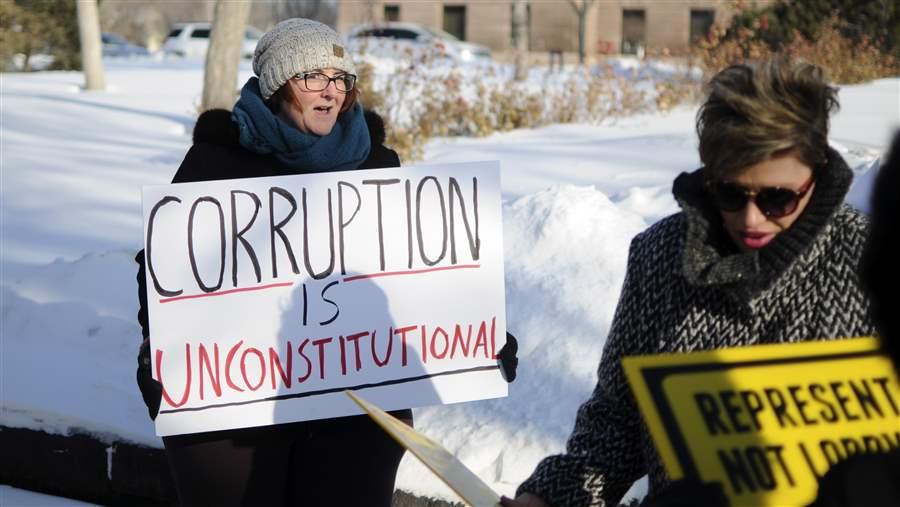 A South Dakota voter shows her support for a ballot initiative that sought to restrict state campaign contributions and lobbying. In South Dakota and other states, legislators overturned or overhauled voter-approved measures.

State legislators across the country fought back this year against a recent surge in citizen-generated ballot initiatives by modifying or scrapping voter-approved laws and passing new laws to make it harder for people to put measures on the ballot in the first place.

South Dakota state legislators scrapped voter-approved campaign finance and lobbying restrictions. Maine lawmakers repealed a new tax on the wealthy. And in Florida, lawmakers decided a new law legalizing medical marijuana wouldn’t allow users to smoke it — prompting a lawsuit by one of the primary backers of the initiative.

There were 76 citizen-initiated measures on the ballot in 2016, the highest number in a decade. The renewed interest in 2016 stemmed in part from legislatures’ reluctance to deal with controversial issues like marijuana legalization and minimum wage hikes.

In addition, lower voter turnout in the 2014 elections meant that fewer signatures were needed to get a ballot issue before voters in some states. This year, some states took steps to make the ballot initiative process more difficult.

Josh Altic of Ballotpedia, an independent website that tracks ballot initiatives in the states, said this year’s pushback was the most dramatic in recent memory. “We have definitely seen some notable cases of legislative tampering this year,” Altic said, “especially with regard to the boldness with which legislatures are willing to change or repeal initiatives.”

Ballot measures on hot-button issues attracted public and media attention and highlighted lawmakers’ inaction, helping to spark the backlash, according to Susan MacManus, a professor of political science at the University of South Florida.

“The more controversial the issue, the more the legislators feel left out,” MacManus said. “There’s a tension between legislators and the initiative process.”

Craig Burnett, a political science professor at Hofstra University who studies ballot issues, pointed to the country’s charged political atmosphere, in which “ignoring political norms has not only become routine, but often applauded,” as a factor.

“Such a political climate is bound to encourage the kinds of reactions to initiatives that voters have approved,” Burnett said.

For their part, state lawmakers argue that many of the ballot measures voters approve are sloppily written, don’t take into account current law, or wouldn’t have the effect intended.

Maurice Cunningham, associate professor of political science at the University of Massachusetts, Boston, also noted the growing influence of big money in initiative campaigns, which makes it easier for lawmakers to claim that a ballot measure may not really reflect the will of the voters.

“The intent of progressives in initiating initiatives and referenda [historically] was to circumvent legislatures that were not doing the people’s will,” Cunningham said. “Now referenda are often used by interests that can’t get something through the legislative process — hearings, amendments, debates — but can put a measure on the ballot and, by virtue of campaign spending, have a pretty good chance to get voters to pass it." 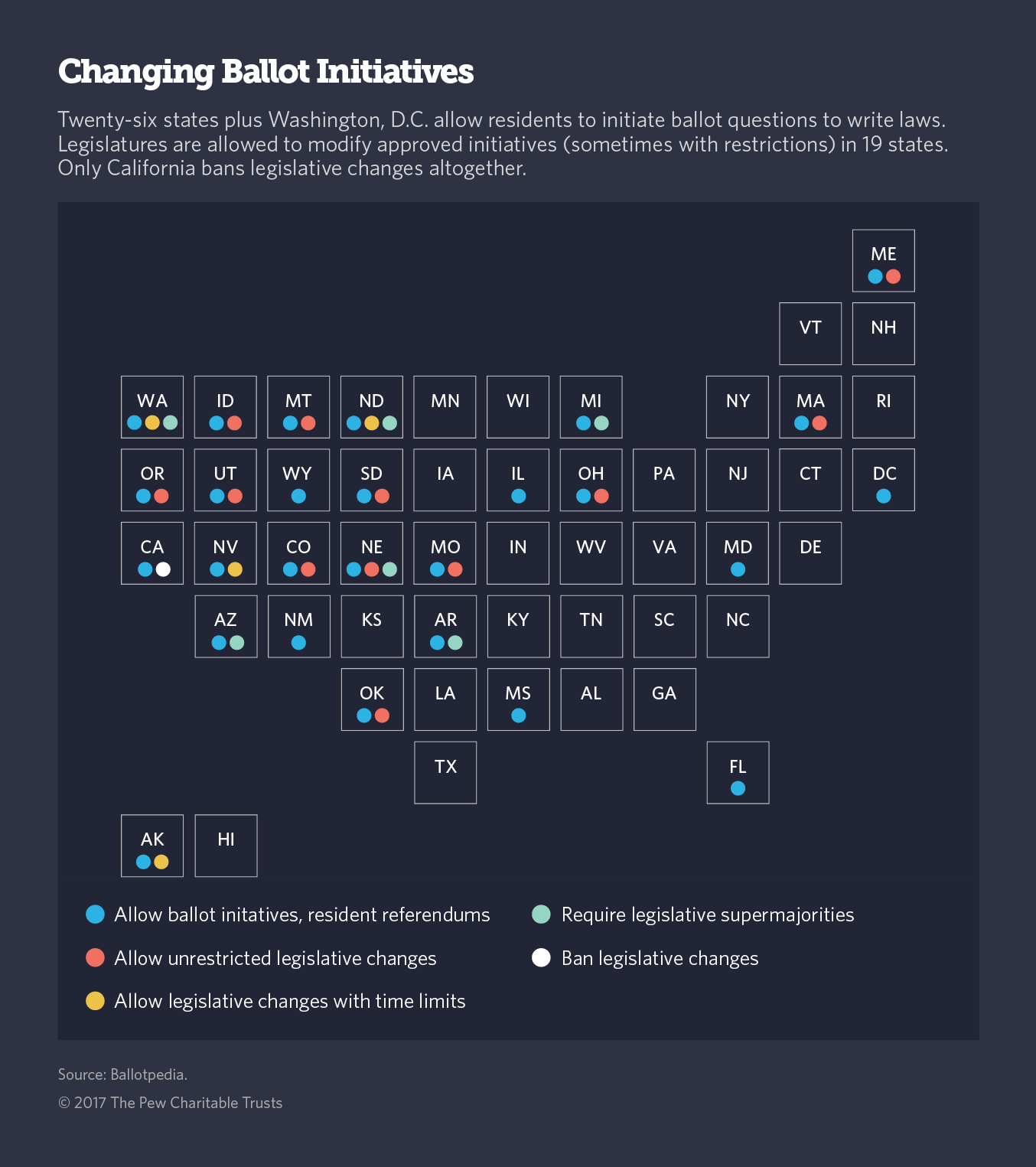 Unwilling or Unable to Act

Twenty-six states plus Washington, D.C., permit citizen-generated ballot initiatives as a way for voters to enact or change laws when their elected representatives are unwilling or unable to do so. (Ballot initiatives are different from referendums, which lawmakers put to the voters.)

Ballot measures have been instrumental in advancing certain issues. For example, every marijuana legalization effort but one — Vermont’s — has been instituted by voters via the ballot. (Vermont’s governor vetoed the legalization measure the Legislature passed.)

On some issues, such as legislative term limits, proponents have gone the ballot measure route because they considered it unlikely that incumbent lawmakers would vote against their own interests.

But the strategy failed this year in South Dakota, where legislators repealed Measure 22, a voter-approved ballot initiative that would have limited political contributions, set up a publicly funded campaign finance program for willing candidates, and created a state campaign ethics commission to enforce it.

Daugaard also argued that the measure would cost the state $4.9 million, money that would be better spent on education. The Legislature overturned the ballot question by hefty majorities.

Backers of the initiative, and some lawmakers, were furious, and immediately started another petition drive for an even more restrictive law to put on the ballot in 2018.

“I was greatly disappointed that the Legislature overturned the will of the people,” said state Sen. Lance Russell, a Republican who represents the rural Mount Rushmore area.

“We were the first state in the nation to have in its constitution the right to initiative and referendum,” he said. “And I do not believe that the founding fathers of the process could have ever imagined that the Legislature would simply disregard a majority vote of the general election.”

Maine legislators were similarly bold. Voters there approved four initiatives in 2016, but lawmakers changed the substance of two of them: The Legislature repealed a new tax on the wealthy and partially repealed a minimum wage hike to take into account workers who get tips. Maine voters narrowly approved the 3 percent surcharge on incomes above $200,000, 51 to 49 percent.

Republican Gov. Paul LePage, backed by many Republicans in the Legislature, vowed to get rid of it. He said it would drive wealthy people out of Maine, including greatly needed doctors and medical personnel, and would hurt business investment. He said his own son was leaving the state for a better job, more money and a lower income tax. But to get rid of the tax, LePage had to assuage Democrats with more state money for education, which the tax was supposed to fund.

The tipped wage issue in Maine brought an immediate backlash as soon as it passed. Servers contended if patrons realized servers were getting a higher minimum wage — the initiative called for a $12 base wage by 2024 — they might get less tip money, and that restaurants could drop their base pay even further than the current average, which is about half the minimum wage.

And restaurateurs balked at paying the higher base wage. After a spate of boisterous public hearings, the Legislature scrapped the idea and went back to allowing a sub-minimum wage for tipped workers.

Maine lawmakers also delayed the implementation of recreational marijuana legalization, from September 2017 to February 2018, to give the state time to set up regulations, and to transfer governance from the Department of Agriculture to the bureau of alcohol.

David Boyer, Maine political director for the Marijuana Policy Project, a nationwide interest group that spearheaded the petition drive to get marijuana legalization on the Maine ballot, said he could accept the delay, considering what lawmakers might have done.

“I would be heartbroken if after all the blood, sweat and tears, they waved their magic wand and we got a middle finger from the Legislature saying ‘we know better than you,’ ” he said.

In Florida, lawmakers added restrictions to a ballot initiative legalizing medical marijuana, banning users from smoking it and requiring doctors to take a two-hour, $500 course before prescribing it. The implementing law Republican Gov. Rick Scott signed also bars doctors with a financial interest in marijuana growing or testing facilities from prescribing it. Initiative backers have filed a lawsuit to reverse the smoking ban.

The Massachusetts Legislature also largely rewrote the successful recreational marijuana initiative there, including revising the oversight mechanism for legal weed, revamping the tax rate, and raising the total tax on retail pot purchases to a maximum of 20 percent. The initiative only called for a maximum tax rate of 12 percent, including state and local levies.

Massachusetts Senate President Stanley Rosenberg, a Democrat, defended the Legislature’s actions. He said the extra tax hike was necessary because the lower rate provided by the initiative didn’t cover the state’s costs to regulate and provide drug treatment for those who might need it. He said the Legislature did no violence to the intent of the measure. More broadly, he said, ballot initiatives should be more like yes or no questions and should “leave the rest to the Legislature.”

Many state legislatures also took steps to rein in future ballot initiatives. According to Ballotpedia, 186 bills were introduced this year concerning changes to the initiative process in 33 states. As of mid-July, 17 of the measures had been approved and 61 were still pending. Those bills added or lifted restrictions on the process, changed campaign finance rules, and added supermajority requirements, among other provisions.

Arizona, for example, prohibited paying petition circulators by the number of signatures they collect and moved to require strict scrutiny of petitions and strict compliance with rules surrounding the process.

The Maine House passed a bill to require signatures from 10 percent of the voters in both the more populous 1st Congressional District and the rural 2nd District. That would make it harder to obtain the necessary signatures because voters live in more remote areas in the Northern Maine district and ensure that the southern part of the state does not have more clout in initiatives. That bill is still pending.

Those changes may sound small, but Paul Jacob, president of Citizens in Charge, a pro-initiative group, said changes like Arizona’s hurt petition drives, which often employ volunteers or unskilled workers.

Changing the standard to “strict compliance” with rules might mean that inadvertent oversights like failing to certify one page of a multi-page signature list could nullify the entire list. “It’s mainly designed to give all sorts of new reasons to throw signatures out,” Jacob said.