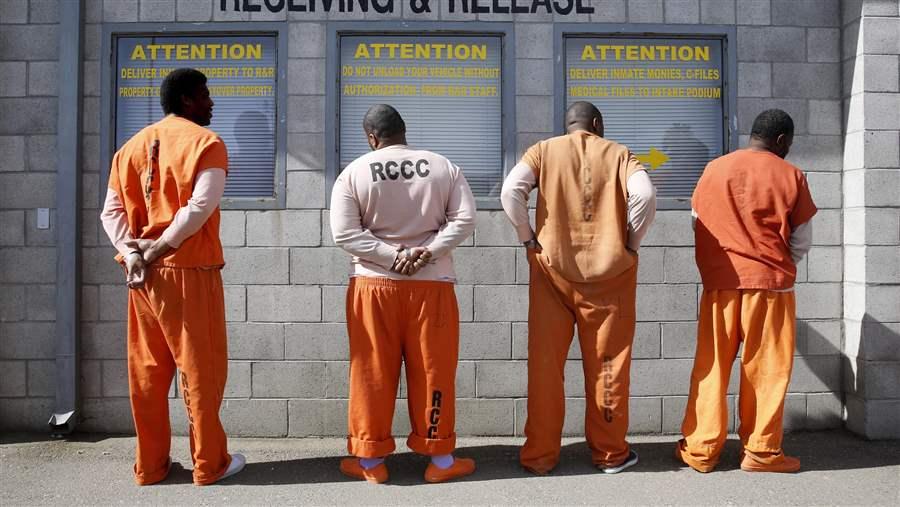 Prisoners in Tracy, California. Many states are beginning to invest more seriously in efforts to help ex-offenders re-enter society, hoping that fewer barriers to getting work and adjusting to a new life will keep people from going back to prison.

To ease prison crowding and rein in corrections spending, state legislatures are trying to help ex-offenders re-enter society with the goal of ensuring they don’t return to prison.

People exiting prison often struggle to find work and housing, and many legislators say the law continues to punish them as they are hit with court debt and barred from entering certain professions and, in some places, from getting public assistance.

“With the exception of people that get sentenced to life, everybody that goes to prison is going to get out eventually,” said Utah state Sen. Daniel Thatcher, a Republican who sponsored a new law that makes it easier for ex-offenders to clear their criminal records. “When they go to reintegrate we see how incredibly difficult it is for people to meet these standards that we are setting.”

Utah was one of at least three states that enacted legislation this year making it easier to expunge a criminal record. States also moved to make it easier for ex-offenders to get professional licenses and to limit the penalties ex-offenders and others face for not paying court fines and fees.

Several states enacted so-called ban the box laws that bar employers from asking about a person’s criminal history on a job application, and some eliminated restrictions that keep those with a felony drug charge from getting food stamps. Arkansas, Kentucky and Louisiana passed broad criminal justice reform packages that included similar provisions.

For years, states have tried to reduce prison costs by shortening sentences and diverting people to programs outside prison. The idea behind the push to help ex-offenders re-enter society is that fewer barriers to getting work and adjusting to a new life will keep people from going back to prison.

“We have an incredibly high recidivism rate,” said Louisiana state Rep. Walt Leger, a Democrat and one of the sponsors of the state’s new criminal justice reform package. “One of the biggest challenges we have is successful re-entry.”

This year Utah and Nevada passed legislation barring public employers from asking about a job applicant’s criminal history before an interview, bringing to 28 the number of states with “ban the box” laws.

Supporters say asking applicants to check a box if they have ever been arrested or convicted of a crime discourages those with a record from applying. Banning the box gives applicants with a record the chance to make their pitch and explain a conviction before a potential employer checks their criminal history.

But only nine of the 28 states extend their ban the box laws to private businesses — a much tougher sell to legislators who say they don’t want the government to get so involved in business practices.

In June, Indiana Gov. Eric Holcomb, a Republican, signed an executive order banning the box on executive branch job applications. But in April he signed a law barring local governments from passing ban the box ordinances that would apply to private businesses.

Indiana state Sen. Philip Boots, a Republican who sponsored that law, said, “I don’t want to encourage local governments telling private employers how to conduct their interviews and hiring practices.”

In Washington state, a bill that would have required ban the box for all public and private employers across the state was voted down after disagreements over a portion of the measure that would have invalidated local ordinances and prohibited new ones.

State Sen. Michael Baumgartner, a Republican and one of the bill’s sponsors, said businesses need consistency and the state is in a better position than local governments to enforce ban the box laws.

Many states, including Louisiana, loosened restrictions that kept people with criminal records from getting a variety of professional licenses.

Kentucky targeted occupational licensing boards that were preventing people with criminal records from getting licensed to cut hair or work in health care.

“We always want to talk about forgiveness, but if you get some of these offenses, there’s no forgiveness,” said Kentucky state Rep. Darryl Owens, a Democrat who has sponsored similar measures in previous sessions. “The offense ends up being a lifetime sentence.”

Under the new law, professional boards can turn down applicants based on their criminal records only if there is a clear connection between the ex-offender’s crime and the profession.

Republican Sen. Whitney Westerfield, a former prosecutor and sponsor of the new law, said it should prevent licensing boards from denying ex-offenders outright. Nevertheless, Westerfield worries that a board member “who really wants to be a curmudgeon” could deny a license by claiming a tenuous connection between a past crime and the profession.

Arizona enacted a similar law in May but coupled it with a requirement that boards publicly report how often license applications are being denied and why.

“It’s kind of a shaming mechanism,” said Greg Glod with Right on Crime, a national conservative group promoting criminal justice reform in the state. Making the information public, he said, could prompt people to ask, “Why are you not licensing people to be barbers because they had a drug sentence?”

Some states have sought to improve the job prospects of ex-offenders by sealing criminal records, so that they can only be viewed by law enforcement, or destroying them entirely through expungement.

Nevada, Tennessee and Utah expanded the types of crimes, and the number of crimes, that may be hidden from the public. Tennessee’s expungement law, previously limited mostly to those convicted of misdemeanors, now allows some people with low-level felonies to have charges removed from their record.

Tennessee state Sen. Steve Dickerson, a Republican who sponsored the law, said most lawmakers wanted to make it easier for people with records to find work, but some worried that future legislatures might expand the law too far.

“If someone commits murder, they shouldn’t be able to get that expunged,” Dickerson said. “[But] if a young person is caught with a small bag of marijuana, we don’t want that to haunt someone and prevent them from getting job at 30. Somewhere in between those two extremes is a happy place.”

Many states have opted out of a 1996 federal law that allows them to withhold welfare, including food stamps, from drug felons. This year Louisiana scrapped its law requiring those ex-offenders to wait a year before applying for food stamps, and Arkansas lifted its ban on food stamps for that population.

“Violent offenders and sex offenders could access public assistance, but those who committed drug offenses couldn’t get it for a year,” said Leger in Louisiana. “People thought, ‘That doesn’t make sense. Why carve out those people and put another barrier to re-entry?’ ”

But in Nevada, a proposal to no longer require drug felons to undergo drug treatment in order to get food stamps was vetoed in May by Republican Gov. Brian Sandoval, who said the change would have removed “important tools and incentives for drug offenders to receive necessary treatment for addiction and rebuild their lives.”

States are also reevaluating the court fees that can leave people coming out of prison with thousands of dollars in debt and, in some states, a revoked driver’s license if they fail to make payments.

Virginia enacted a law in April that creates more payment options and imposes limits on the down payments that judges can demand, in an effort to reduce the number of driver’s licenses that are revoked.

Louisiana will now allow judges to offer alternatives to paying court debt, such as community service, or waive debt entirely, rather than revoking a license or putting people in jail for nonpayment. The Louisiana law also sets new guidelines for payment plans, requiring that debtors pay one day’s wages each month for a year or half the length of their supervision, whichever is longer, and forgives the remaining debt of those who follow the payment plan.

Judges and clerks sometimes oppose such laws because they fear they will not collect enough in fees to keep courthouses running.

A new law in Tennessee makes it easier for ex-offenders to avoid the suspension of their driver’s licenses for failing to pay court debts. Now, in addition to being able to drive to work, ex-offenders with court debt can get a hardship license to drive to school, religious services and court.

Tennessee suspended more than 146,000 driver’s licenses for failure to pay court fees between 2012 and 2016, but only 7 percent were reinstated, according to a lawsuit filed against the state that said the practice unfairly discriminates against poor people.

The state pushed to have the suit dismissed, arguing it had a legitimate interest in “putting the burden for payment directly on the people whose conduct caused such costs to be incurred instead of on the backs of taxpayers.”

Dickerson, who sponsored the new law, said revoking the licenses was making it harder for people to pay off their debt.

“You have people at a vulnerable time in life, they just left prison and they’re trying to get job, and many have to drive to get to a job,” he said. “So this was putting up further impediments.”