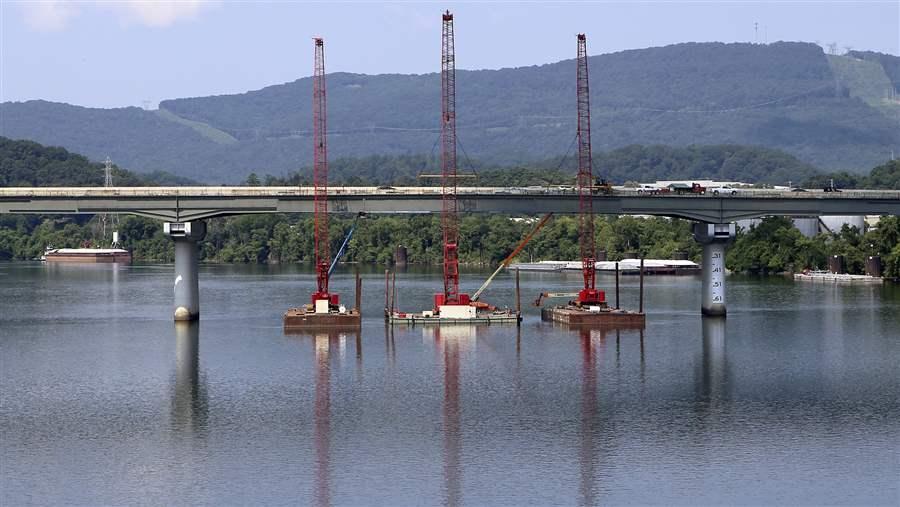 A bridge in Chattanooga, Tennessee. This year Tennessee lawmakers raised the state’s gas tax in order to pay for infrastructure improvements.

Editor's Note: This story was updated on July 26, 2017 to correct the number of states that raised both gas taxes and other fees.

Motorists don’t like to pay more at the pump, and lawmakers worry that if they raise taxes on gasoline, they’ll be voted out of office. But states rely on those taxes to build and maintain roads and bridges. With revenue lagging, those structures have been falling into disrepair in many places.

Despite the tough politics, 26 states have raised taxes on motor fuels in the past four years. The eight states that raised taxes this year include Tennessee and South Carolina, deep-red states dominated by fiscal conservatives.

“We’ve seen more bipartisan agreement on raising gas taxes than almost any other tax out there,” said Jared Walczak, senior policy analyst at the Tax Foundation, a right-leaning think tank in Washington, D.C.

Lawmakers say the sorry condition of their state’s roads and bridges compelled them to act.

“The deterioration of the infrastructure, particularly the highways, in South Carolina was the impetus,” House Majority Leader Gary Simrill, a Republican, said of the law he shepherded through the Legislature. Over half the roads in South Carolina are in poor condition, according to the state Transportation Department.

Gas tax deals are often crafted to reassure voters that their money will be spent wisely. South Carolina and Oregon’s latest laws changed some of the rules governing their transportation commissions. California referred a constitutional amendment to the ballot that would guarantee new revenue raised by certain taxes on fuel and vehicle license fees will be spent on transportation.

And in South Carolina, Tennessee, and New Jersey — which raised gas taxes last year — getting conservative lawmakers to vote for raising the gas tax required simultaneously cutting other taxes that fund general operations.

The gas tax increases typically involve a few more cents a gallon over several years. That’s enough to raise some of the funding needed to take on each state’s backlog of maintenance and expansion projects, but not enough to eliminate them entirely.

South Carolina’s law is projected to raise about $180 million in its first year, with annual revenue increasing to over $700 million by 2024, for instance, while the Transportation Department says it would need $11 billion to repair every substandard road in the state.

The federal government helps states pay for some highway projects and other transportation costs. But the federal gas tax hasn’t been raised in over 20 years. And while President Donald Trump has talked about investing $1 trillion in infrastructure, states are unlikely to get an influx of new cash anytime soon. Trump’s proposed budget would cut funding for the U.S. Department of Transportation — including to some programs that make grants to states — and an infrastructure bill is currently low on Congress’ list of priorities.

States are also grappling with the fact that today’s cars and trucks can drive for longer distances on less fuel, and a small but growing number of vehicles don’t run on gasoline at all. Six of the eight states that raised the gas tax this year also raised some other vehicle fees and imposed others, including new $100-$150 registration fees for electric vehicles. 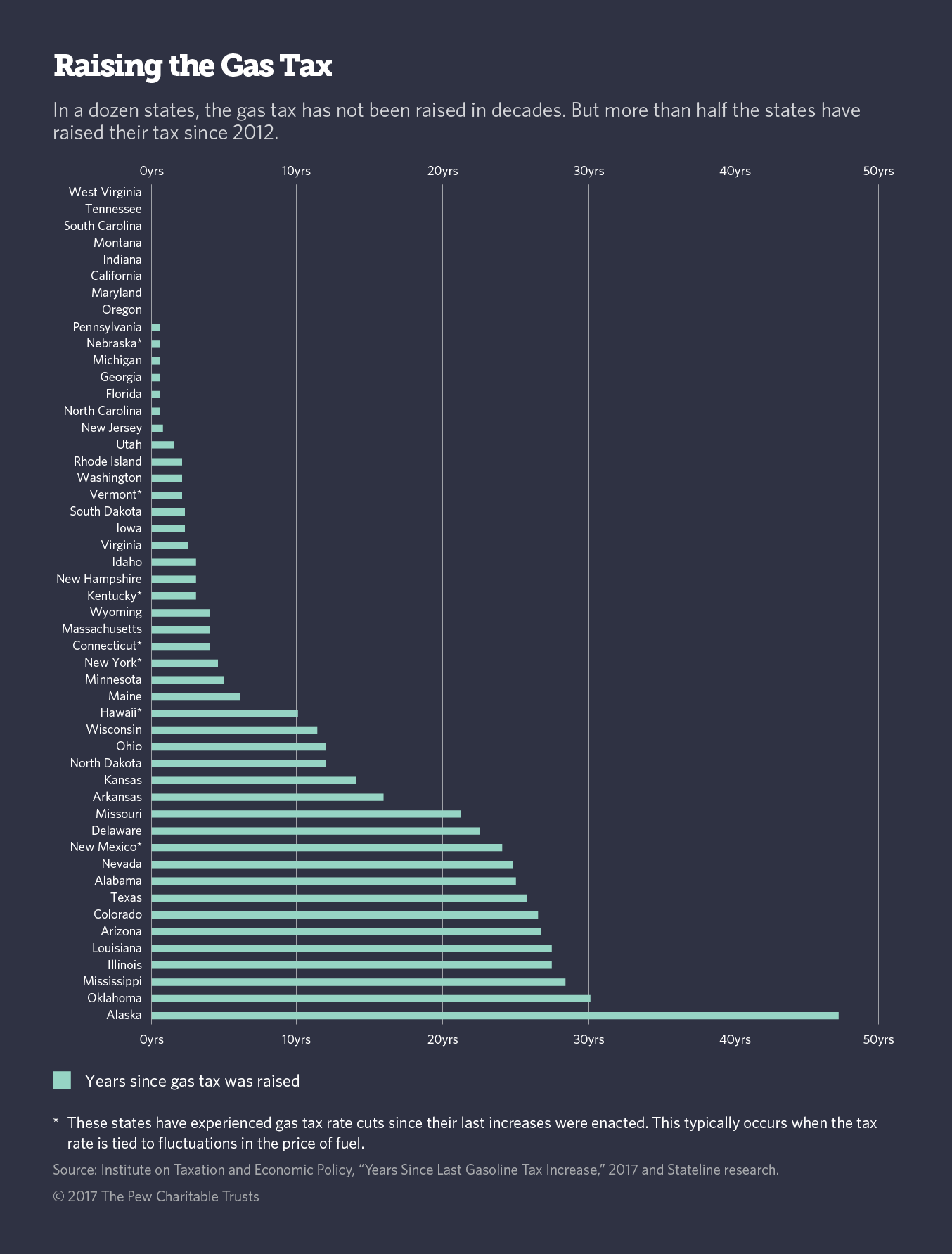 Spending on highways and transit has fallen over the past 15 years across all levels of government, according to The Pew Charitable Trusts (Pew also funds Stateline). State funding fell by 15 percent between 2002 and 2012 as more fuel-efficient cars hit the road and gas taxes in many states failed to keep pace with inflation. Meanwhile, transportation construction costs rose.

Over the past few years, advocacy coalitions comprised of state Chambers of Commerce, regional automobile clubs, construction companies and unions have mobilized in several states to convince lawmakers that failing to adequately fund transportation is hurting people and the economy.

“The road conditions every year are getting worse,” Michelin North America President Pete Selleck told The Greenville News during a lobbying trip to the South Carolina capitol earlier this year. Lawmakers, the tire manufacturer said, have to do “the right thing for the long term.”

But some legislators and governors have pushed back, arguing that their states are spending enough and just need to spend it differently.

New Jersey Gov. Chris Christie, a Republican, told radio listeners last summer that the state’s Transportation Trust Fund was not in crisis — although at the time it was practically insolvent — and that New Jersey was spending plenty on infrastructure.

“We’ve spent $16 billion in five years. But it’s never enough for the liberals in this state,” Christie said. He made it clear that he wouldn’t approve a gas tax increase unless it was part of an overall tax cut.

In vetoing the South Carolina Legislature’s gas tax deal, Republican Gov. Henry McMaster said, “If we were to simply reform how DOT spends your tax dollars to be responsible and accountable, we’d have plenty of money, and this gas tax hike would be totally unnecessary.” The Legislature overrode his veto.

South Carolina’s Simrill says he also used to think that the state transportation agency didn’t need more money. “I was both right and wrong,” he said. His research, which dates back to leading a committee on the issue in 2014, convinced him that the agency needed both more money and to spend its resources more efficiently.

The law he championed this year had three components, all crucial to getting it passed. The first was new revenue for transportation. The law increased the motor fuel user fee by 12 cents per gallon over six years and increased other vehicle fees. The second part of the deal restructured the commission that oversees the transportation agency and created a new highway maintenance trust fund in order to make the agency more efficient.

The third cut taxes in other areas — increasing a tuition tax credit and two income tax credits, and creating a partial property tax exemption for manufacturers — and created a rebate program residents can use to get their gas tax money back over the next six years, until the tax increase is fully implemented.

To get the rebate, residents need to have spent money on improving their vehicle, such as by getting its oil changed. Regulators will cap the total amount all residents in the state can claim in a given year. The law raises more revenue for infrastructure than it cuts in other areas, although the precise amount raised will depend on how many people ask for a rebate.

In Tennessee, Republican Gov. Bill Haslam’s transportation plan raised gas taxes while delivering an overall tax cut, something he touted from day one.

“We wanted a proposal [where] we could literally say, we’re letting Tennesseans keep more money than ever out of what goes to the general fund while we are still addressing the important infrastructure needs that we have,” he said at a January news conference announcing his proposed legislation, flanked by mayors and business leaders.

The law that Haslam later signed raised gasoline and diesel taxes by 6 cents per gallon over three years and increased vehicle registration fees. Yet it still achieved a $300 million net tax cut in its first year, thanks to reductions to the sales tax, a tax on investment earnings, and business taxes for manufacturers.

New Jersey’s 2016 law raised the state tax on gasoline by a whopping 23 cents per gallon. But the increase was paired with cuts to the sales tax, estate tax and some income taxes, plus an increase in the state earned income tax credit. This fiscal year New Jersey is projected to raise an additional $715 million to pay for transportation projects and lose $170 million in revenue that’s typically spent on other programs.

Looking Beyond the Gas Tax

States are also looking beyond fuel taxes for other sources of revenue. Every state that raised the gas tax this year also increased other vehicle fees, including — in six of the eight states — additional fees on electric and hybrid vehicles.

Some lawmakers say that the gas tax is becoming obsolete. Tennessee state Rep. David Hawk, a Republican and the House majority assistant leader, proposed an alternative to Haslam’s plan that would have directed a portion of sales tax revenue into the transportation trust fund.

Hawk said he made the proposal partly because it was a simpler option, and partly because the state needs to move away from the gas tax. “The gas tax is a dinosaur,” he said. He noted that Volvo — a major car manufacturer, albeit a niche player in the U.S. market — recently announced that it was going to phase out the internal combustion engine.

States’ new registration and road use fees for electric — and in some cases, hybrid — vehicles are typically levied annually and range from $100 to $150. Oregon created a fee schedule based on fuel-efficiency, with more fuel-efficient cars paying more and electric vehicles paying the most.

Kevin Pula, a policy specialist at the National Conference of State Legislatures, says that electric vehicles are so rare that charging owners an annual fee isn’t likely to raise much revenue. There are only 460 electric vehicles in all of South Carolina, according to the state office that analyzes the fiscal impact of legislation.

States are adding such fees on principle, to make sure electric vehicles — which don’t need gasoline — contribute to road construction and maintenance, Pula said. “It’s an equity debate,” he said.

Over the long term, road user fees may become a more important source of state revenue than the gas tax. And some states may begin charging drivers based on the miles they’ve driven rather than the gas they’ve bought. Oregon is already testing that approach. For now, however, states are stuck with the gas tax.

Simrill says that if voters can see their tax dollars at work, raising the gas tax need not be so controversial. “In most cases, folks don’t mind paying more for a service if they see the results they’re paying for,” he said.