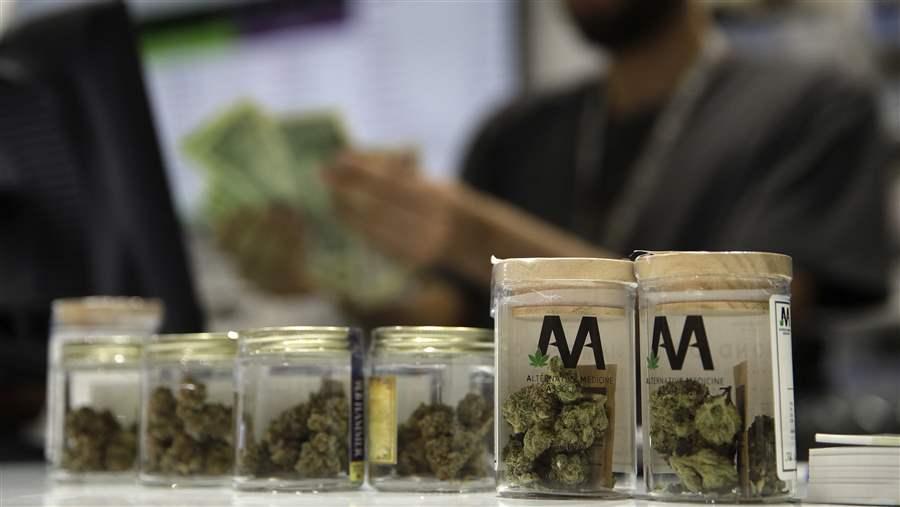 A cashier rings up a marijuana sale in Nevada. The state began selling recreational marijuana July 1, six months ahead of schedule.

Editor's Note: A graphic for this story was updated July 27 to specify which states have legal, taxed and regulated marijuana

Ask advocates of marijuana legalization how their cause fared during the 2017 state legislative sessions and they’ll tell you that though the gains were incremental, they’re hopeful that several legislatures will eventually make possession and sale of the federally prohibited drug legal.

Ask the same of people who oppose legalization and they’ll say it’s been a banner year — they choked efforts to legalize recreational marijuana in many statehouses and stalled implementation of pot sales in at least one other.

But even as public support for marijuana continues to grow, few of those measures survived. That’s in part because many lawmakers are concerned that the Trump administration may begin strict enforcement of federal drug laws, political analysts say. Many legislators are also beholden to conservative supporters and face little political pressure to sign off on marijuana legislation, the analysts say.

G. Terry Madonna, a public affairs professor who coordinates polling for Franklin and Marshall College, says legislatures are unlikely to take up legalization because most are controlled by Republicans who are less likely to support marijuana legalization and because supporters of legal marijuana don’t care enough about legalization to pressure lawmakers into voting for it.

“The question I always ask is, ‘Do [voters] care about it?’ ” he said. “What’s the level of concern that they have. And right now, for the vast majority of Americans, it’s not a cutting-edge issue.”

“Nobody wants to see the uniforms [supporting] their opponent,” he said.

This year lawmakers in Vermont got close to being the first to legalize recreational marijuana, only to see the legislation they passed get vetoed by Gov. Phil Scott, a Republican. A compromise bill that would legalize possession of marijuana, but not establish a system for growing and selling it, is expected to pass early in the 2018 legislative session.

So far, voters in eight states have legalized recreational marijuana and regulate sales of the drug. West Virginia this year became the 30th state to legalize medical marijuana, and in New Hampshire, a new law decriminalized possession of small amounts of the drug. 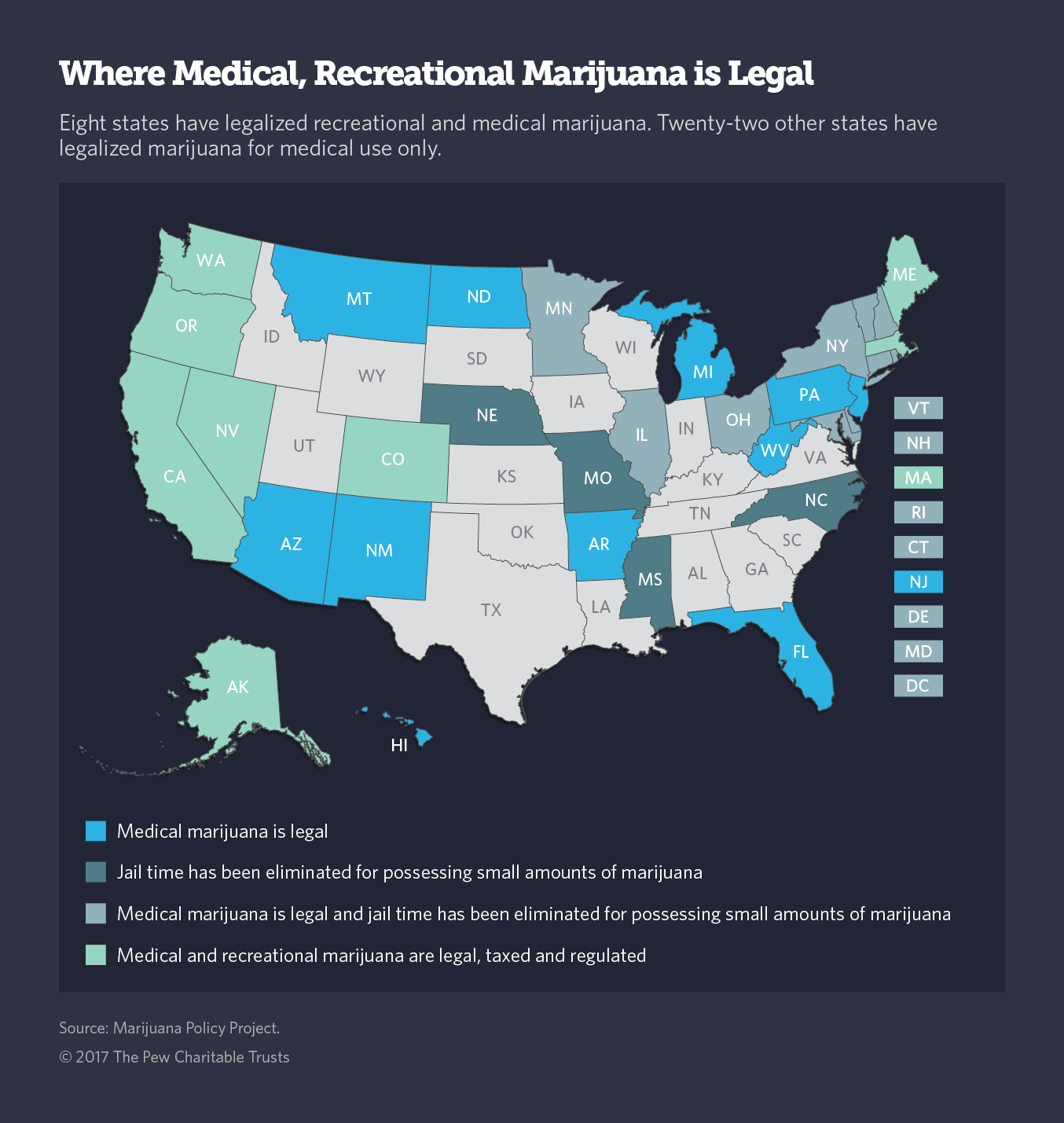 Each year more bills to legalize recreational marijuana are being introduced in state legislatures. But most lawmakers are still unwilling pass them, leaving it up to voters to decide if the plant that opponents say is a gateway to hardcore drug use should be available for mass consumption and regulated similarly to alcohol.

“You don’t get out of a hundred years of hysteria easily,” said Jim Borghesani, communications director for a successful campaign last fall in Massachusetts to legalize recreational marijuana through a voter referendum. “A lot of public officials are just afraid of this issue, even though the public just keeps passing these ballots initiatives.”

Voters in California, Maine and Nevada also moved to legalize the possession and sale of recreational marijuana last year, joining four other states that have acted through ballot measures.

But the referendums can be light on implementation details, and once they’re passed, it’s often up to legislators to pass laws that govern how and where marijuana can be sold.

For Massachusetts and Nevada, the processes for establishing a system to sell recreational marijuana couldn’t look more different.

The ballot measures in both states proposed to start allowing marijuana sales in 2018. But almost immediately Massachusetts lawmakers pushed back implementation by six months.

Nevada officials did the opposite, moving the first day of sales up to this July. Dispensaries sold so much pot in the first few days that they almost ran out.

Meanwhile, Massachusetts lawmakers were still slugging out the details of sales and regulation. A proposal in the Democratic-controlled state House, backed by more than four-fifths of its members, would have upended the ballot measure, raising the tax rate on marijuana from 12 to 28 percent and nixing a provision that would allow voters to decide whether pot shops could open in their town, leaving that authority to local lawmakers.

A version of the bill in the Senate, also controlled by Democrats, would have maintained the tax rate and referendum procedures approved by voters and included an amendment to expunge old marijuana criminal records.

Just last week the House and Senate released a compromise bill that rewrites the recreational marijuana law as well as a 4-year-old medical marijuana statute. It would increase the tax on recreational marijuana to 20 percent and allow voters in towns and cities that approved the ballot measure to make the call on whether shops would be banned. The Senate’s expungement provision was scrapped.

“The advocates … and the people who vote for these measures can sometimes get upset. It’s not how they anticipated it would be regulated,” said Karmen Hanson, who tracks drug policy for the National Conference of State Legislatures.

Sales are now slated to begin next July, delaying what the Massachusetts Revenue Department expects to be $64 million in tax revenue in the first year of sales, as well as the creation of new jobs in the sector. Borghesani speculates that if the state takes too long to implement marijuana sales, investors looking to capitalize on marijuana companies might lose interest in Massachusetts.

Other states were able to implement their marijuana programs without costly delays, he said. “We’re going to be in it six more months than we need to be, and that doesn’t help anybody.”

Advocates have long been watching Vermont, expecting that it would become the first Legislature to legalize recreational marijuana. But while the Legislature signed off on the measure, the governor’s veto put the state with at least 20 others that failed to pass recreational marijuana bills this year. Some, including New York and Illinois, will carry their bills over into 2018, while others such as Connecticut and Mississippi killed the bills before they received a vote from the full legislature.

Kevin Sabet, president of Smart Approaches to Marijuana, considers these failures a big win for his coalition, which lobbies against legalization, but favors reducing punishments for low-level marijuana crimes.

He said voters sign off on marijuana ballot measures with little understanding of what the potential laws mean and how they will impact their communities. Once marijuana is legal, they realize they don’t want it in their neighborhoods, he said.

“Even people that might be OK generally with marijuana, they don’t want the smell increasing as we’re seeing in cities like Washington, D.C., and Boston,” Sabet said.

In about half the states, ballot measure laws won’t allow for votes on marijuana. That means widespread legalization ultimately lies in the hands of legislatures.

Still, 17 states have enacted no laws to legalize marijuana in any form or lessen the penalties for possessing and using it.

Advocates say legalization in states like Maine and Massachusetts could prompt lawmakers in other East Coast states to consider legal pot as a way to generate revenue and create jobs.

Matt Simon, the New England political director for the Marijuana Policy Project, a nationwide organization that lobbies for marijuana legalization, said once sales are established in a few states, especially in a compact region like New England, more will be willing to legalize.

For example, though Vermont is expected to legalize possession, and not retail sales, next year, the state and others in that region will eventually legalize retail sales, he said.

“The reality is that retail markets are coming to the region,” Simon said. “It is changing the thinking.”