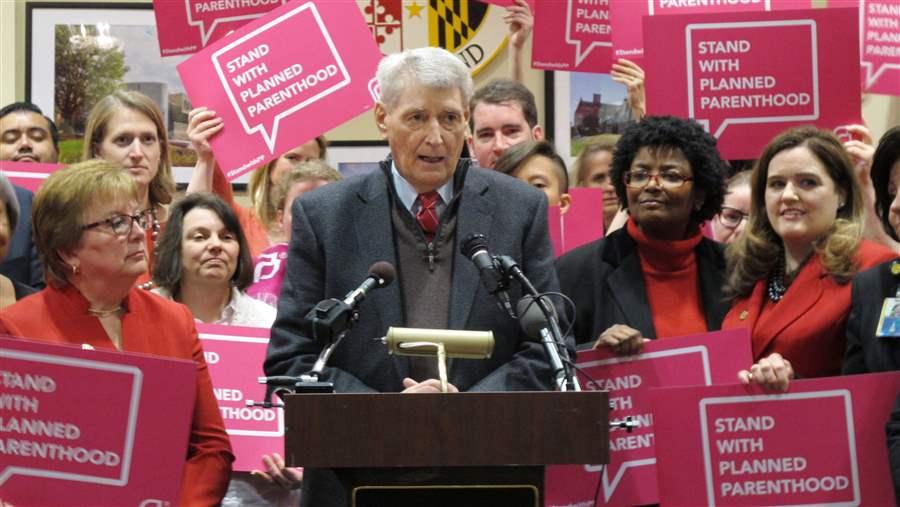 Maryland House Speaker Michael Busch speaks at a news conference in Annapolis in support of legislation to protect funding for Planned Parenthood. Democratic lawmakers in Maryland and other states enacted a record number of laws in 2017 to protect women’s access to affordable birth control and other reproductive health services.

This story was updated July 24 to correct the name of the Iowa Family Planning Council.

As Washington moved to reduce federal funding for women’s health this year, adversaries in the war over affordable birth control and other women’s health services shifted the battleground to state capitals — resulting in a spate of new laws that both expand and contract women’s access to care.

It happened quickly in Iowa. In May, then-Gov. Terry Branstad, a Republican, signed a bill defunding Planned Parenthood. Medicaid dollars stopped flowing to the group July 1, and four of the state’s Planned Parenthood clinics closed within a week.

That left nearly 15,000 women in small communities without access to reproductive health services, including cancer screenings, birth control, testing for and treatment of sexually transmitted diseases, and annual checkups.

Medicaid pays for three-quarters of all publicly supported women’s health programs. So when Iowa abruptly cut off Medicaid dollars to Planned Parenthood, it was game over, said Jodi Tomlonovik, executive director of the Family Planning Council of Iowa, which oversees distribution of federal and state money to women’s health clinics.

Iowa’s law, which applies to Planned Parenthood and any other women’s health clinics affiliated with a group that performs abortions, may also defund women’s clinics in the state’s largest health care system, UnityPoint Health, as well as the University of Iowa Hospitals and Clinics, because certain clinics in both groups perform abortions in cases of fetal abnormalities, she said.

In three other states with GOP governors and legislatures — Arizona, Kentucky and South Carolina — 2017 state budgets that exclude Planned Parenthood and other women’s health clinics affiliated with an abortion provider from all state and federal funding may have similar effects on local clinics. 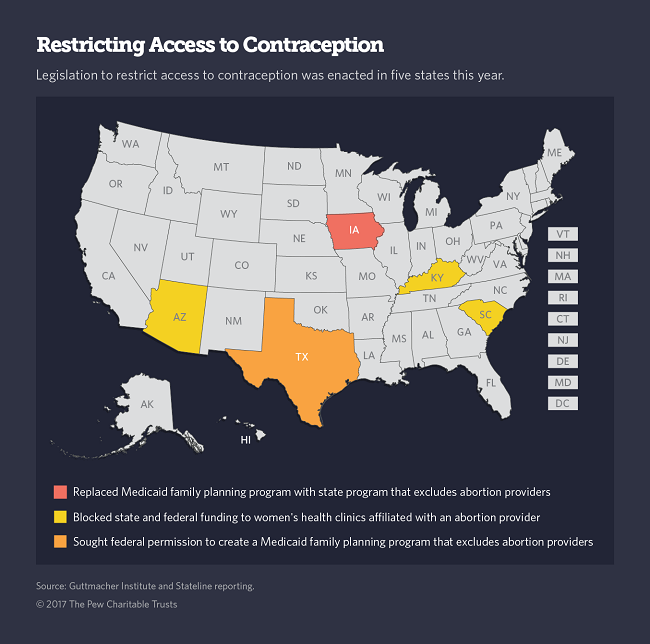 And in a first-of-its-kind approach to defunding abortion providers, Texas asked the federal government in May for permission to recreate a Medicaid family planning program it eliminated four years ago so it could create a state-funded plan. This time, Texas wants to exclude Planned Parenthood and other abortion providers from participating in the program, and fund it with federal Medicaid dollars.

If the request is approved, many more states can be expected to file similar applications, said Elizabeth Nash, a policy analyst at the Guttmacher Institute, which tracks reproductive health policy.

In sharp contrast, Nevada and Maine, both led by Republican governors, enacted new laws mandating insurance companies cover the costs of all U.S. Food and Drug Administration approved forms of contraception without delay and without requiring women to try the cheapest method first, as some insurers now do.

Oregon, a state with a Democratic governor and Legislature, did the same thing, adding abortions to the list of reproductive services insurers must cover. And Maryland became the first state to enact a law committing state funds to Planned Parenthood if federal funds are taken away.

States also enacted two other types of laws designed to ease access to birth control pills and other forms of contraceptives. Colorado, Maine, Nevada, New York, Virginia and Washington enacted laws requiring all insurers to cover 12-month prescriptions of birth control pills to make it easier for women to take the pills without interruption, particularly those who must travel long distances to a drugstore.

Maryland, New Mexico and Oregon enacted or updated laws allowing pharmacists to prescribe birth control pills, patches and other forms of contraception that do not require a doctor to administer. 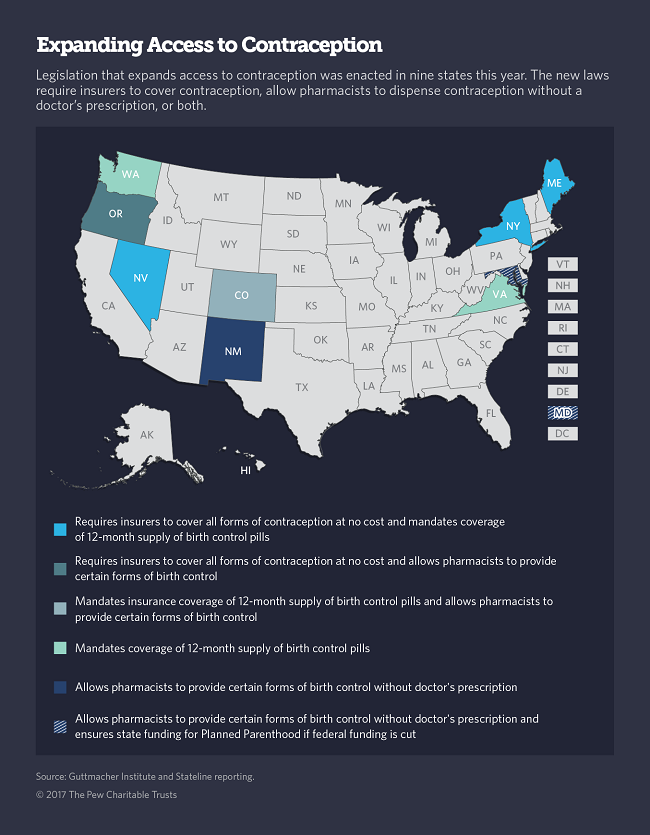 The flurry of state legislative activity on women’s health issues this year is a direct result of the federal policy shifts on women’s health since President Donald Trump took office, said Danielle Wells, a spokeswoman on state policy issues for Planned Parenthood.

But she cautioned that state initiatives can only go so far to mitigate what she said would be very damaging effects on women’s health care if the federal government decides to defund Planned Parenthood.

“While it’s heartening to see state lawmakers put women’s health ahead of politics, at the end of the day, if Congress votes to prohibit individuals on Medicaid from accessing care at Planned Parenthood, no amount of state support will be able to fill that gap,” Wells said.

But abortion opponents argue that the nation’s declining abortion rates are due to tougher state abortion laws, and they maintain that women will still be able to obtain birth control and other reproductive health services from a variety of other health care providers without funneling taxpayer dollars to Planned Parenthood.

“The issue is not contraception, the issue is why should we give the nation’s No. 1 abortion provider more than a half a billion dollars to provide a service that is better provided by other medical centers where women can receive full-service care,” said Kristi Hamrick, spokeswoman for Americans United for Life, an anti-abortion advocacy group.

Over the last six years, a handful of Republican-led states have tried to chip away at funding for Planned Parenthood, one of the nation’s largest providers of women’s health care. The most common tactic has been to exclude the group from Medicaid’s network of providers.

Indiana was the first state that attempted to block Planned Parenthood funding, followed by Alabama, Arizona, Arkansas, Florida, Kansas, Louisiana, Mississippi, Oklahoma and Texas. In nearly every case, courts shot down their attempts to prohibit the abortion provider from participating in state Medicaid and federal grant programs.

But that policy was quickly reversed when Trump took office.

Less than four months into his administration, Trump signed a law allowing states to do just what they had been trying to do for years — exclude Planned Parenthood from Medicaid and other women’s reproductive health care programs, despite a federal Medicaid statute that prohibits it.

At the same time, Republicans in Congress repeatedly have called for elimination of the roughly $300 million federal grant program known as Title X that funds Planned Parenthood and other local family planning clinics.

And in May, a leaked Health and Human Services proposal revealed that the Trump administration intends to undo a provision in the federal health law that requires nearly all employers to include coverage of all forms of contraception in their employee health plans. If the proposal takes effect, it would make it easy for employers to opt out of coverage of contraception for religious or moral reasons.

Those actions and the uncertain future of the Affordable Care Act have stripped Planned Parenthood and many other women’s health clinics of any certainty about their financial future, causing some to put off any plans for expansion.

Despite setbacks in Iowa and other states, Planned Parenthood’s Wells says women’s health advocates have been buoyed by their successes in several GOP states — and by the overall number of women’s health initiatives this year. She attributes the unprecedented level of state activity in support of her group and its goals to a national groundswell of activism that started with the Women’s March on Washington early this year, and the momentum in state capitols that has been sustained since.

But other women’s health advocates worry that just as many states, emboldened by the Trump administration’s apparent green light on defunding women’s health, will move quickly to cripple Planned Parenthood clinics in their states.

“People should be very concerned about what states are doing around Medicaid and women’s health now that the new administration has reversed Obama-era protections,” said Mara Gandal-Powers, senior counsel with the National Women’s Law Center.

A recent poll by the Kaiser Family Foundation found that three-quarters of the American public, and a majority of Republicans, favor continuing federal funding of Planned Parenthood for non-abortion services.

At least 38 million U.S. women of reproductive age need contraceptive services because they are sexually active and do not want to become pregnant, according to Guttmacher. In 2014, more than half of them needed subsidized services because they were unable to purchase contraception on their own. Thirty-nine percent of those received care at federally funded clinics, including Planned Parenthood, or from private practice doctors serving Medicaid enrollees.

For state Medicaid programs, preventing unintended pregnancies makes financial sense. Every dollar spent on publicly funded family services yields $4 in Medicaid savings, because unintended births are avoided, according to the National Partnership for Women and Families. Total public expenditures on unintended pregnancies in the U.S. were an estimated $21 billion in 2010, nearly a third of which was state money.

The potential demise of the Affordable Care Act, with its expansion of Medicaid and required coverage of birth control for all women at no cost, represents by far the biggest potential loss to women’s health.

More than 55 million women gained access to free contraception and preventive services under the ACA starting in 2013, according to the National Women’s Law Center.

“Things got better under the ACA. It reset the baseline,” Gandal-Powers said. “That’s why we’re seeing such vocal and active pushback against what is happening in women’s health now.”