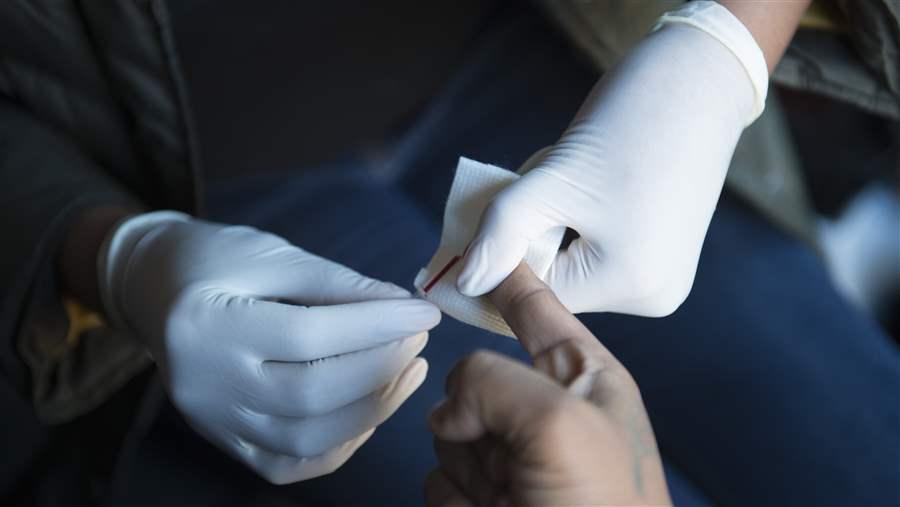 A woman in Washington, D.C., waits to have her blood drawn for an HIV test. The city once faced a public health crisis, but now leads the country in its efforts to combat HIV/AIDS.

Ten years ago, Washington, D.C., was on the verge of a public health disaster: It had the highest reported rates of HIV in the country. And in a city of 588,000, 1,333 people tested positive for HIV in 2007 alone. By the time they were tested, most had full-blown AIDS.

Back then, city officials acknowledged that they didn’t have a complete picture of the problem. But they estimated that as many as one in 20 residents were infected with the disease, rivaling rates in sub-Saharan Africa.

“We had an epidemic that wasn’t being controlled by any stretch of the imagination,” said Marsha Martin, who was then the city’s director of HIV/AIDS programs.

But today, even as the city’s population has grown to 681,000, its infection rates have dropped dramatically. In 2016, 347 people in the nation’s capital tested positive for HIV, down three-quarters from 2007.

D.C.’s success mirrors national trends; HIV rates are on the decline around the country. But the tools city officials used to tackle the epidemic are being held up as a model for the rest of the country, AIDS researchers say.

“There are things that D.C. has done that are unique and ahead of the curve,” said Greg Millet, a vice president at amfAR, the Foundation for AIDS Research. “All of this is part of a good news story for what’s happening in the rest of the country.”

How did D.C. do it? A decade ago, city health officials stepped up AIDS awareness campaigns and pushed to get more residents tested. They created a “red carpet” program, immediately linking anyone who tested positive to care, whether or not they had health insurance. They stepped up condom distribution and began a robust needle exchange program. Since then, the city has almost eliminated new infections from IV drug use. Finally, in 2014, officials increased the use of PrEP, a drug that prevents the transmission of HIV.

The city’s goal now: to end the epidemic by 2020. In December, Mayor Muriel Bowser announced the city’s aggressive “90-90-90-50” plan, based on UNAIDS goals and the Obama administration’s National HIV/AIDS Strategy.

The plan sets specific targets to be met by 2020: 90 percent of the HIV positive people in the district will know their status; 90 percent of people diagnosed with HIV will be in treatment; 90 percent of residents who are in treatment will reach viral load suppression, which means they can’t transmit the disease to others; and new HIV infection rates will be cut in half.

Today, the D.C. Department of Health estimates that 86 percent of people with HIV know their status; 76 percent are in treatment; 82 percent are virally suppressed.

“D.C. was a national embarrassment in terms of our HIV rates, really by almost any measure,” said Channing Wickham, executive director of the Washington AIDS Partnership, the largest private funder of HIV prevention, care and advocacy programs in the region. “If we can turn things around in 10 years, then any jurisdiction can do it — if they have the will to do it.”

A decade ago, D.C. had a lot of catching up to do. A 2005 report by the D.C. Appleseed Center for Law and Justice, a local policy research organization, said the city was at least a decade behind the rest of the country in fighting the epidemic. The city wasn’t systematic in its approach; it didn’t coordinate services effectively with private HIV/AIDS organizations; it wasn’t addressing the needs of certain populations, such as the incarcerated; and its prevention efforts needed an overhaul.

The report was a shock to the system. And, driven by an unusual effort among public officials, private groups, churches and community activists, the city set out to change the way it dealt with AIDS.

In 2006, the district launched an ambitious campaign to get more people tested. Public health officials took to local radio stations, urging anyone who was sexually active, regardless of age, to get tested. They set up mobile units a few blocks from the White House, offering free tests. The idea was to make HIV testing as routine as getting your cholesterol checked.

“This was visionary — and the right thing to do,” Millet said.

As more people in the district were tested for HIV, fewer people were diagnosed with HIV and full-blown AIDS, Millet said.

“If you catch people sooner in the infection and get them in care, they’re likely to live a very long life and less likely to transmit it to others,” Millet said.

The approach was unusual, Jones said, and it allowed the city to direct resources to local AIDS groups that knew best how to serve the needs of those populations.

The city also worked with the police. In the past, police would flag anyone they pulled over who was carrying more than three condoms as a potential sex worker, said Michael Kharfen, senior deputy director of HIV/AIDS, Hepatitis, STD and TB Administration for the D.C. Department of Health.

City health workers convinced police that carrying large numbers of condoms was ultimately good for public health, he said. “I wanted to flood the city in rivers of latex.”

D.C.’s success is due to a number of factors: plentiful resources, strategic use of data to target at-risk populations, city council members who pushed for changes, and active community-based AIDS organizations, such as La Clinica Del Pueblo and Whitman-Walker Health, said Terrance Moore, deputy executive director of the National Alliance of State and Territorial AIDS Directors.

The city also requires medical doctors, nurses and physician assistants to have three continuing medical education credits on HIV in order to be licensed, a requirement that Kharfen said doesn’t exist in most other jurisdictions.

Another thing that helped: the city has above-average access to medical care, according to Amy Killelea, the alliance’s director of health systems integration. So early on, more people who tested positive for HIV could get treatment, regardless of their ability to pay.

Before the implementation of the Affordable Care Act, D.C. was one of the few jurisdictions that had expanded Medicaid to cover people living with HIV who were not disabled, Killelea said.

And beginning in 2006, anyone in the district who tested positive for HIV and earned less than $55,000 a year was immediately eligible for free drugs, Martin said. That’s a much more generous income limit than in other states.

“That was very, very, very important,” she said, because AIDS drugs can cost thousands of dollars a month.

The D.C. Department of Health’s HIV funding is $85 million a year and largely made up of federal funds. The district’s budget must be approved by Congress, which has had an impact in its fight against AIDS, city officials say. Congress blocked the city from implementing its needle exchange program until 2007.

In 2015, the district’s new HIV diagnosis rate was far higher than any state’s, according to Centers for Disease Control and Prevention data.

But when the district is counted as a metropolitan area encompassing parts of Virginia and Maryland, the city ranks 12th in the nation, said Patrick Sullivan, a professor of epidemiology at Emory University’s Rollins School of Public Health and a former AIDS researcher at the CDC who tracks HIV rates.

Earlier this year, Washington became the first U.S. city to launch an ad campaign encouraging straight black women, who have the second highest rates of infection in D.C., to take PrEP. And this summer, D.C. launched a new outreach campaign, #UequalsU, that stresses the importance of taking HIV medication to suppress the virus so that it can’t be passed on to others.

AIDS experts worry that a proposal from the Trump administration could drastically reduce HIV/AIDS funding. That could spell chaos for a city that managed to beat back disaster, they say.

“If we were to slow down now, our epidemic could come roaring back,” said Wickham of the Washington AIDS Partnership. “People see the headlines that D.C. is on top of things. We are. But we have a lot of work to do still.”