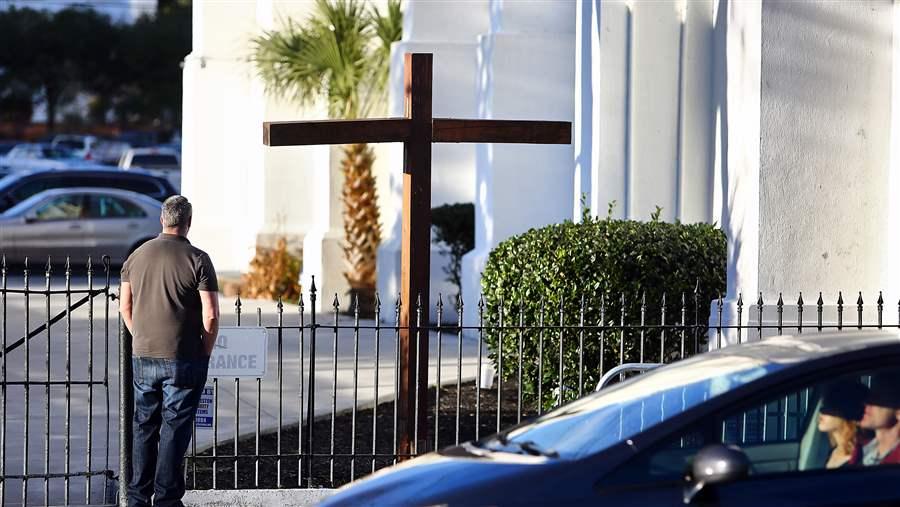 Nine people were killed in a 2015 shooting at Emanuel AME Church in Charleston, South Carolina. Police departments across the country are connecting first responders with “peer-group cops” to help them cope with trauma.

CHARLESTON, S.C. — When Police Chief Gregory Mullen started getting calls about a potential “mass casualty” at the Emanuel AME Church downtown, he knew the first officers on the scene might need some extra help.

Not reinforcements or more firepower, but help coping with what he suspected would be a horrific scene. And he was right.

In barely six minutes on the night of June 17, 2015, nine people at a Bible study at one of America’s oldest African-American churches were murdered when a young white man opened fire, spewing racial epithets and 77 hollow-point bullets. Eight victims died on the spot; one died later in the hospital.

To counsel the first responders, Mullen called in cops who had experience with tough crime scenes. Some of those “peer-group cops” were from Blacksburg, Virginia, and had responded to the slaughter of 32 students and teachers at Virginia Tech in 2007.

For decades, police have kept silent about the toll trauma takes on them, their families and their careers. One result, according to researchers, is that they have higher suicide rates than the general population.

To change that, police departments across the country are turning to nonprofit or state-funded programs that help cops cope by connecting them to their peers and to mental health professionals.

“There’s a much greater awareness of the effects of exposure to traumatic events in just the past five years,” said James Baker, a director with the International Association of Chiefs of Police.

Many of the nonprofit programs are based on the Law Enforcement Assistance Program (LEAP) that began in South Carolina 20 years ago. Eric Skidmore, a Presbyterian pastor, launched the program with a federal grant, and now runs it in partnership with the state police. State taxpayers can check a box to contribute on their income tax forms, and the nonprofit raises additional money from supporters.

Skidmore and his peer-support cops arrived less than 48 hours after the shooting at the church known as Mother Emanuel. “We did some psychological first aid,” Skidmore said. Later some of the responders attended a three-day seminar, where they talked in both large and small groups of officers who’ve gone through trauma, too.

Arkansas, Georgia, North Carolina, Ohio, Texas and Virginia have similar programs, and Kentucky is creating one. In Florida, police departments in Miami-Dade and Seminole counties are leaders in providing strong psychological support for officers, Baker said.

Not a single Charleston officer has retired early or quit the force as a result of the Emanuel Church shooting, according to Mullen. He credits the sessions put on by South Carolina’s LEAP program.

“A really important part of law enforcement is making sure you keep your people mentally, physically, emotionally and spiritually fit so they can do the work they are meant to do,” Mullen said.

Cops typically don’t talk about “the horrible things that one human being does to another,” said Gregg Dwyer, a psychiatrist who works with the police assistance groups in Georgia, North Carolina and South Carolina. “There’s fear of what it will do to them on the job if they open up. They worry, ‘Who’s going to know? Will it cost me a promotion?’ ”

Dwyer, a former agent with the Naval Criminal Investigative Service (NCIS), said the military’s increasing openness to helping service members cope with trauma is starting to spread to police departments.

But many police officers are still reluctant to open up. “The ethos of policing is: ‘We’re super people and we can’t be weak. We’re not a bunch of sissies,’ ” said John Violanti, a research professor at the State University of New York at Buffalo who studies police health. “What they forget is that they’re human.”

Between 7 and 19 percent of America’s cops suffer from post-traumatic stress disorder, although those numbers may be low because police don’t readily report their emotional health, according to Violanti. And police are much more likely to commit suicide, he said.

Police have a 69 percent higher risk of suicide than the average worker, and detectives have an 82 percent higher risk, according to Violanti’s analysis of data from the Centers for Disease Control and Prevention. The cumulative effect of seeing mayhem over years makes cops more vulnerable to heart disease and diabetes, too, according to Violanti’s research.

“It’s the classic example of mind affecting body,” he said.

Cops also are working in a highly charged political atmosphere now, with criticism of police shootings of unarmed people, he said. “I relate it to the Vietnam War, where vets were spat on and called ‘baby killers,’ ” Violanti said. “It’s demoralizing.”

Benny Back was a deputy sheriff in Surry County, Virginia, in 2005 when he got the call that an 8-year-old girl had been hit by a driver as she was crossing the street. It was his daughter, Isabella. Though he’d been in the Army and been a cop for two decades, the loss hit him hard.

“I started drinking heavily; I fell into alcohol, and had thoughts of suicide,” said Back, 51, who is now a deputy sheriff in Charles City, Virginia.

His brother, Capt. Aaron Back of the North Carolina State Highway Patrol, hooked his brother up with the LEAP program in South Carolina, and took him there for a three-day session. “My brother fought me all the way. He didn’t want to go, no one would understand, blah, blah, blah,” Aaron said. The program was so successful for his brother that Aaron helped start a LEAP program in North Carolina in 2012. “Quite honestly, it saved my life,” Back said.

When cops show up for a three-day seminar on dealing with trauma, they all have that reluctant “what have I gotten myself into” look, said Rita Villareal-Watkins, executive director of the Law Enforcement Management Institute in Huntsville, Texas, which has been running trauma sessions for five years.

At the beginning of a typical session at many of these programs, officers (and sometimes their spouses) sit around a big table with peer-group cops and mental health professionals. The officers tell their stories, sometimes for the first time. Everything is confidential — their police chiefs won’t hear about what is said in the sessions.

“It’s gut-wrenching,” said Watkins. “There’s a lot of emotion that first day. We share so much that the day is excruciatingly long.”

On the second day, the participating officers break into small groups, then meet one-on-one with a health professional or a peer-group cop, and maybe get a massage. “These people are carrying so much physical stress and they don’t even realize it,” Watkins said.

Then they participate in a technique to ease symptoms of trauma called Eye Movement Desensitization and Reprocessing (EMDR). It’s an internationally known mode of treatment that combines talk therapy with rapid eye movement like you experience in deep sleep.

People dealing with trauma can’t get the images of the violence they’ve seen out of their minds. “It’s like a 60-inch plasma color TV in front of your face all day long,” said Lt. Steve Click of the Ohio State Highway Patrol, who directs the Ohio program.

After EMDR training, he said, “it’s a 20-inch black-and-white in the corner somewhere.”

Karen Lansing, who’s known as the “cop whisperer,” is an expert on EMDR and has treated hundreds of police and U.S. military personnel who suffer from PTSD and other forms of trauma. Lansing was the first to study brain images and trauma in police. She says it’s tough to break through the “warrior rescuer mentality” that first responders and military people have.

When she does an EMDR session, she asks officers to close their eyes and recall the traumatic event and focus on every thought, feeling, physical reaction and emotion they experienced. Lansing and the officer break the episode into minute-by-minute segments and discuss them over and over.

“It’s a clinically controlled flashback,” she said. “We’re reactivating physical memory, what they tasted in their mouth, like the taste of metal, which is really adrenaline. What they actually felt as the bullet entered. What were the sounds around them,” Lansing said.