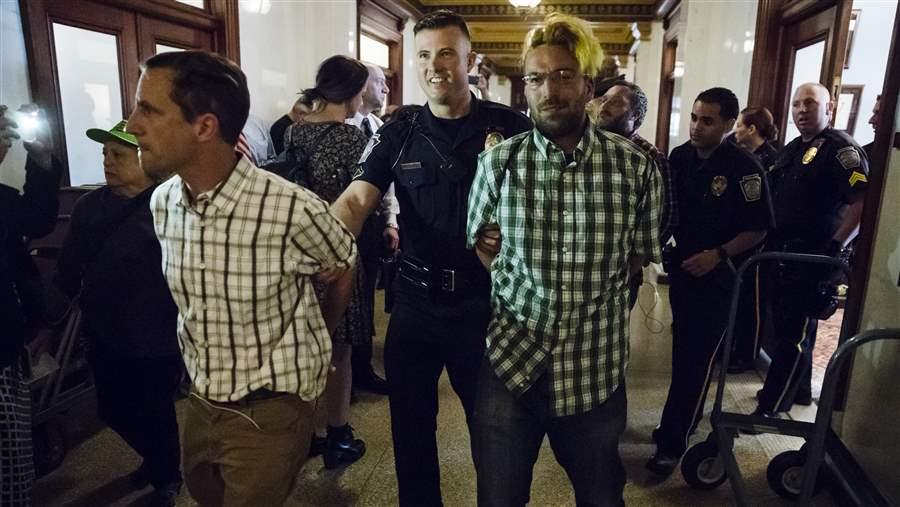 Demonstrators seeking a ban on gifts to lawmakers are taken away after being arrested at the Pennsylvania Capitol in Harrisburg.

Two months after demonstrators demanding greater accountability from state legislators were arrested at the Pennsylvania Capitol, a bill to ban gifts from lobbyists to officials remains stuck in committee without a hearing.

The laws that govern gift-giving from lobbyists to public officials vary widely from state to state. In Pennsylvania and other states with relatively lenient laws, good-government activists and some elected officials have been working to impose tougher restrictions on gift-giving by lobbyists. They argue that gifts from lobbyists may corrupt elected officials’ decision-making and cause them to stray from the best interests of their constituents.

“We have a deep, deep culture of corruption in Harrisburg, and gifts from lobbyists are one manifestation of that,” said Michael Pollack, who helped organize the May protests.

But Pollack and other activists have met resistance from lawmakers who say lobbyists offer informed perspectives on key issues — and that these exchanges often happen over meals or at concerts and sporting events that lobbyists pay for. And in a recent ruling, a federal judge said a Kentucky law banning gifts from lobbyists to legislators violates lobbyists’ First Amendment rights.

In Missouri, where lobbyists can give unlimited gifts to lawmakers, Gov. Eric Greitens, a Republican, made the issue a pillar of his 2016 campaign and signed an executive order on his first day banning employees in his office from accepting gifts from lobbyists. The state House of Representatives in January passed a bill to ban lobbyists from giving gifts to elected officials, though it died in the Senate.

“If you have a system that allows for unlimited amounts of gifts, it lends itself to the appearance of impropriety,” said state Rep. Justin Alferman, a Republican, who introduced the Missouri bill. In certain cases, he added, “It definitely levies some influence on lawmakers.”

And in South Dakota, a new law signed in March sets an annual $100 limit on gifts from lobbyists to legislators and other public officials. The law came after the state’s Republican-controlled Legislature repealed a sweeping voter-approved ethics mandate earlier in the year.

In other states, officials are aiming to address loopholes in existing lobbying laws. Earlier this year in Virginia, a law went into effect that eliminated a provision that had allowed lawmakers to accept unlimited gifts from lobbyists if the gift was connected to a “common interest” of theirs.

However, an exemption that allows “personal friends” to give unlimited gifts to public officials remains on the books in the state. In 2016, the U.S. Supreme Court overturned the felony conviction of former Republican Gov. Bob McDonnell for accepting thousands of dollars’ worth of gifts from a Virginia-based businessman, ruling that his actions were covered by the personal friend exemption.

In 2014, after a scandal involving several state representatives who allegedly accepted cash from a lobbyist working undercover for the state’s attorney general, the Pennsylvania House of Representatives imposed a ban on cash gifts from lobbyists to its members. But lobbyists can still give virtually unlimited non-cash gifts to legislators.

Legislators in Pennsylvania are required to report gifts worth more than $250, as well as hospitality or lodging valued at over $650. But there is no cap on the total number or value of gifts or services legislators can accept from lobbyists.

In 2016, one state legislator accepted a trip to New Zealand worth nearly $6,000; another accepted a gift from a Nigerian king worth $750. Lawmakers assert that these kinds of gifts are associated with official state business, but critics argue the gifts benefit the lawmaker and are not related to legislating.

Under state law, lobbyists may not use gifts to influence policy decisions. But Stephen Spaulding, chief of strategy for the left-leaning government watchdog group Common Cause, said “Pennsylvania lacks a bright line” for determining when a gift has in fact influenced an elected official and run afoul of the law.

State Rep. Rick Saccone, a Republican, introduced a bill in the Pennsylvania House this year that would ban any public official or employee from accepting gifts from lobbyists.

“Most people don’t realize Pennsylvania doesn’t have a ban on gifts,” said Saccone. “And when they find out about it, they’re not happy.”

Saccone’s bill has been in the House State Government Committee since January, but it remains unclear if it will get a hearing. Republican state Rep. Daryl Metcalfe, who chairs the committee, did not respond to a request for comment.

Metcalfe last month called the demonstrators who gathered at the Capitol “a bunch of spoiled losers” and alleged some were paid protesters.

Missouri, like Pennsylvania, does not impose limits on gifts from lobbyists to legislators, though lobbyists have to report their expenditures to the Missouri Ethics Commission.

As part of a broad effort to “end the culture of corruption” in Jefferson City, Greitens promised to ban gifts from lobbyists. On his first day in office, the Missouri governor signed an executive order barring employees under his purview from accepting gifts from lobbyists.

However, some critics noted that the state already had a law prohibiting such state employees from accepting gifts from lobbyists and suggested the order was largely symbolic.

Early in the 2017 session, the Missouri House passed a bill to ban gifts from lobbyists to elected officials.

“I want constituents to know that when representatives go to Jefferson City, they’re representing the people’s interests — not their own,” Alferman said.

The bill failed to make it out of committee in the Senate. For some legislators, the result wasn’t a total surprise — a similar bill also failed in the Senate last year.

In South Dakota, voters approved a ballot measure in November that would have limited gifts from lobbyists to lawmakers, established an independent ethics commission, and imposed a mandatory waiting period before legislators could join a lobbying firm after leaving office.

Repealing that measure drew outrage from voters. When the repeal bill landed on Republican Gov. Dennis Daugaard’s desk in February, a small plane circled the Capitol, towing a banner that read, “Shame on you! Respect our vote!”

In his State of the State address, Daugaard had slammed the referendum, but urged the Legislature to revisit the proposals one by one.

Daugaard said he would support efforts to replace the measure with “provisions that are well-crafted, constitutional, and responsive to the voters.”

“The voters expect our campaign finance system to be transparent and honest,” he said. “They expect lobbyists to use only their arguments to win our votes.”

In Kentucky, a federal judge last month struck down key parts of a strict state law that regulates lobbyist gift-giving and campaign contributions. In his opinion, Judge William Bertelsman of the U.S. district court for the Eastern District of Kentucky court said the state’s restrictions on lobbyists violated their First Amendment rights.

As a result, Kentucky lobbyists will have virtually unlimited ability to give gifts to politicians, and to donate to and raise money for campaigns, which was not permitted under the law. (The Kentucky Legislative Ethics Commission voted unanimously to challenge the judge’s ruling.)

Virginia has been working to limit gifts from lobbyists and close loopholes since 2014, when McDonnell and his wife were convicted of felonies for accepting more than $170,000 in loans and gifts from a friend and businessman.

Last year, a law went into effect that capped annual gifts from a lobbyist to a single legislator at $100. An ethics board was established to review and approve gifts over $100.

And, under a law that took effect in April, lobbyists are required to submit an overview at the end of each legislative session detailing any gifts sent to legislators. The law also scrapped the provision that allowed officials to accept tickets to events valued at over $100 when the lobbyist and official shared a “common interest” in the event.

Some lawmakers want to impose additional restrictions on gift-giving by lobbyists, such as eliminating the “personal friend” exemption that cleared McDonnell. But even if the personal friend exemption remains on the books, some say the McDonnell case has shifted legislators’ perspective on lobbyist gifts.

“The McDonnell prosecution put the fear of God in many legislators,” said state Sen. Scott Surovell, a Democrat. “Now many refuse to accept any gifts, even after we lowered the limits.”