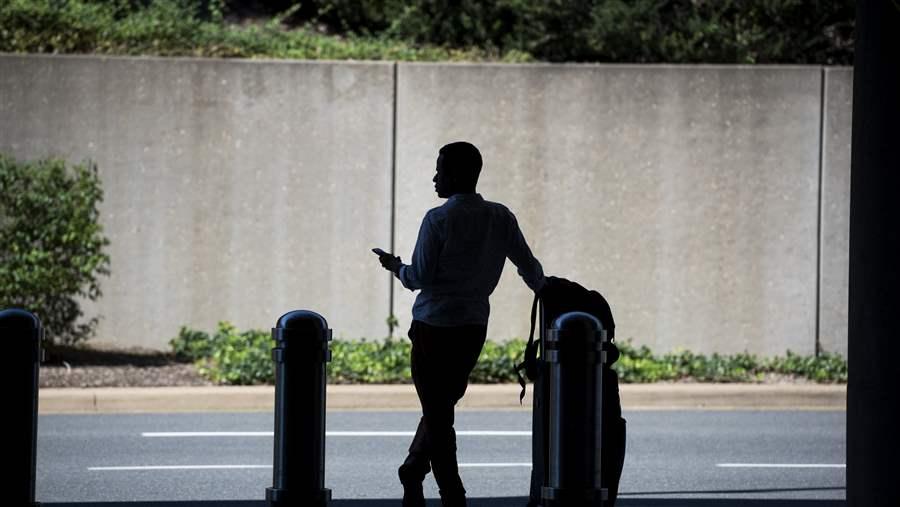 A man waits for a ride-hailing service at Washington’s Reagan National Airport. Many officials are concerned airports could take a financial hit if fewer people park in garages or use taxis or rental cars.

Ride-hailing companies such as Uber and Lyft already have struck a financial blow to their competitors in the taxi industry. Now many officials fear they may take a big bite out of airport parking revenue.

Rather than driving and leaving their cars at garages, a growing number of passengers are tapping their smartphone apps and turning to ride-hailing to get to and from the airport.

At some airports, proceeds from parking, which officials rely on to help keep the system up and running, are already taking a hit.

And airport officials worry the popular digital technology may have an impact not just on parking, but on revenue from taxis and rental cars as well.

Because many airports have only had formal agreements with the ride-hailing services, also called transportation network companies (TNCs), for a year or two — or even less in some places — officials haven’t had enough time to figure out exactly how their bottom line is affected, they say.

“Airport managers are just now coming to understand how this trend will impact them, and they are concerned,” said Carter Morris, an executive vice president for the American Association of Airport Executives, which represents airport managers. “It’s disruptive technology, and airports need to adapt and do it quickly.”

Ride-hailing has skyrocketed since 2014, when a handful of U.S. airports first permitted it. Today, Lyft has agreements with nearly 240 airports and Uber has agreements with more than a hundred, including large ones, such as Chicago’s O’Hare International and Atlanta’s Hartsfield-Jackson International, and small ones, such as Punta Gorda, in Florida, and Laramie Regional, in Wyoming.

Many airports are charging TNCs a fee to pick up passengers, to compensate for potential revenue loss and ensure that the companies don’t gain an unfair advantage. Some also charge for drop-offs, and some charge an annual permit fee or a one-time operating fee.

Trip fees, which get tacked on to the rider’s bill, vary from airport to airport: from $5 in Chicago and $4 in Los Angeles to $2 at Dallas-Fort Worth.

Federal regulations prohibit airports from making a profit. But they are expected to raise enough money to cover their costs. And to do that, they collect revenue from a number of sources.

Airlines pay landing and arrival fees and other charges; rental car companies pay to operate at the airport, and taxis, limos and other ground transportation services often do the same.

Fees from parking and ground transportation are important to an airport’s balance sheet. Last year, the $3.5 billion in fees represented 41 percent of the $8.5 billion in U.S. airport revenue not related to airlines, according to the Federal Aviation Administration.

Parking fees typically represent between one-fifth and one-quarter of that revenue category, Morris said. His group’s facilities committee plans to examine the impact TNCs have on airport budgets.

“Parking usually is a pretty significant part of an airport’s revenue,” said Marshall Stevens, deputy executive director of the Harrisburg International Airport, in Pennsylvania, and chair of the committee. “A loss of that revenue either has to be made up or offset with a decrease in expenses.”

At Fresno Yosemite International Airport, in California, TNCs already are having a considerable impact, officials say. The airport collects about $5.5 million a year from parking fees, nearly a quarter of its revenue, said Aviation Director Kevin Meikle.

The airport is losing an estimated $180,000 a year in parking revenue because of the growth of TNCs, which made about 4,500 trips in April, Meikle said. (Uber stopped serving Fresno Yosemite in May.)

To recoup most of that loss and make sure the TNCs are paying a fair fee, officials asked the Fresno City Council to approve a $3 pickup and drop-off fee for ride-hailing. The council rejected the request in April. Some members argued it would hurt passengers, who ultimately would have to pick up the tab.

“The money comes from the average person, the poor slob that’s trying to get to his mom’s funeral,” said Council President Clinton Olivier, who voted against the request.

Meikle said the council’s decision won’t have an immediate impact, but the airport will need to find a way to offset lost parking revenue in the next decade.

“We might need to raise parking rates because of the missing money. We don’t want to do that,” he said. “Or we could raise the rates the airlines pay. But that would be our very last option.”

Meikle and officials from some other small and mid-sized airports say trying to make airlines cough up more to make up for lost parking revenue could result in losing their business.

“If the airlines are not making enough money, they’re going to look for other places to go, other markets,” Meikle said.

At Lehigh Valley International Airport, in Pennsylvania, Executive Director Charles Everett acknowledges that ride-hailing services may have been one reason why the airport’s parking revenue was down $123,000 in fiscal 2016. The airport’s total parking revenue was $4.4 million. He said staffers are collecting data to try to explain the drop. (Uber stopped operating at the airport this month.)

At Dallas-Fort Worth International Airport, parking revenue was up in the first six months of the current fiscal year, compared to last year. But it was nearly $4 million lower than projected, in part because of TNCs. So the airport reduced spending by deferring hiring for open positions and delaying some information technology projects.

As more people turn to ride-hailing to get around, airport officials also worry that taxi and rental car revenue could take a hit.

At Las Vegas’ McCarran International Airport, TNC pickups and drop-offs more than doubled in April compared to a year ago. But taxi pickups were down nearly 13 percent.

And at Buffalo Niagara International Airport, in New York, officials estimate they could lose more than $2 million in revenue a year from parking, taxi and car rental fees because of TNCs, which started service there last month. As part of a one-year pilot agreement, the airport is charging Lyft $3 per ride and Uber a flat fee of $180,000.

Ride-hailing companies often end up agreeing to pay a per-ride fee. But Bakari Brock, Lyft’s senior director of U.S. operations, said that while he understands the need for airports to balance their budgets, customers shouldn’t have to pay more to make up for a revenue shortfall created by unused parking spaces.

“That’s why we are so passionate that we should only agree to fees that we believe are fair,” he said.

And while some airports continue to build and expand garages, Brock questioned whether this is a wise practice, considering how much technology is changing the way the public gets to and from the airport.

“They built these garages years ago and they’re still building them,” he said. “Do you need to do that if the travel behavior of the passengers is changing?”

And it may not just be ride-hailing companies that end up transforming the ground transportation system at airports. If autonomous vehicles become commonplace, parking garages could become dinosaurs.

“TNCs showed up and we started dealing with them after the fact,” said Stevens, the Harrisburg airport executive. “We need to be a little bit ahead of the automated vehicles. We can’t say we’ll worry about our garages after they empty out.”