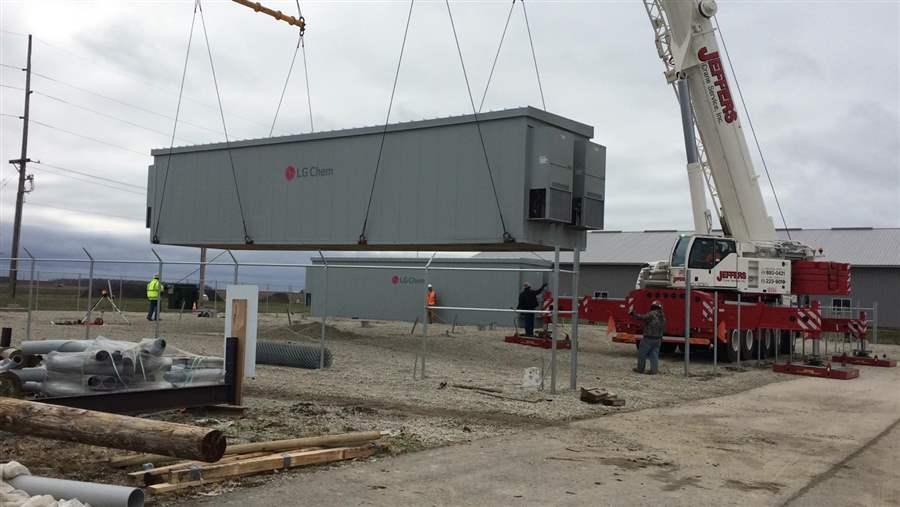 A container of batteries is installed in Minster, Ohio, the first local government to pair energy storage with solar power. Governments are eyeing energy storage as a way to reduce energy costs and carbon emissions.

In Southern California, where an extreme energy shortage has threatened for months to shut off power for millions of homeowners, an unconventional source of electricity is helping to keep the lights on: giant batteries.

Thousands of lithium-ion battery packs — the same kind of batteries that power smartphones and laptops — were installed in massive containers in a handful of spots on the grid earlier this year, from San Diego to Los Angeles. The batteries are now helping power tens of thousands of households.

This kind of quick, mass installation of batteries wouldn’t have been possible in most places. But California had been preparing for years by requiring utilities to connect energy storage to the grid, and funding energy storage projects. Now, as the cost of batteries plummets, officials in other states are looking to follow California’s lead.

State legislatures and utility commissions in about a dozen states considered new laws and rules this year aimed at giving the burgeoning — yet mostly unregulated and undefined — energy storage industry a clear path forward. This includes clarifying rules for who can own storage and how it can be installed, requiring utilities to include storage in their long-term plans, as New Mexico and Washington are considering this year, and even setting targets for how much storage utilities need to buy, as Massachusetts did last month.

States see energy storage as a way to reduce carbon emissions and electricity costs. Energy stored on the grid, for example, can be switched on during times of high demand when electricity is more expensive, such as when people get home from work, eliminating the need for additional power plants to be turned on.

The more states rely on wind and solar, the more they will need to find a way to bottle up some of the energy produced when the sun is shining and the wind is blowing, to be used later when the sun sets and the wind dies down.

“You know you’re going to need it,” said Jason Burwen, policy and advocacy director of the Energy Storage Association. “But regulators just aren’t sure how to treat it.”

Some state initiatives look to give the market a boost. Massachusetts created a new $10 million grant program this year, on top of an initial $10 million investment, for energy storage projects. Oregon clarified that energy storage qualifies for renewable energy financing deals. And Maryland became the first state to create a tax credit for homeowners and business owners who store electricity for later use.

The market is at a turning point, said Ravi Manghani, energy storage director at GTM Research, an energy advisory firm. Costs of lithium-ion battery packs have fallen by about three-quarters since 2011, from $1,000 per kilowatt-hour to under $250, according to the company’s data. Most of this drop was fueled by the increased demand for electric cars, which forced manufacturers to find a way to make cheaper, more efficient batteries. Analysts expect the price to drop in half again from 2016 to 2020. 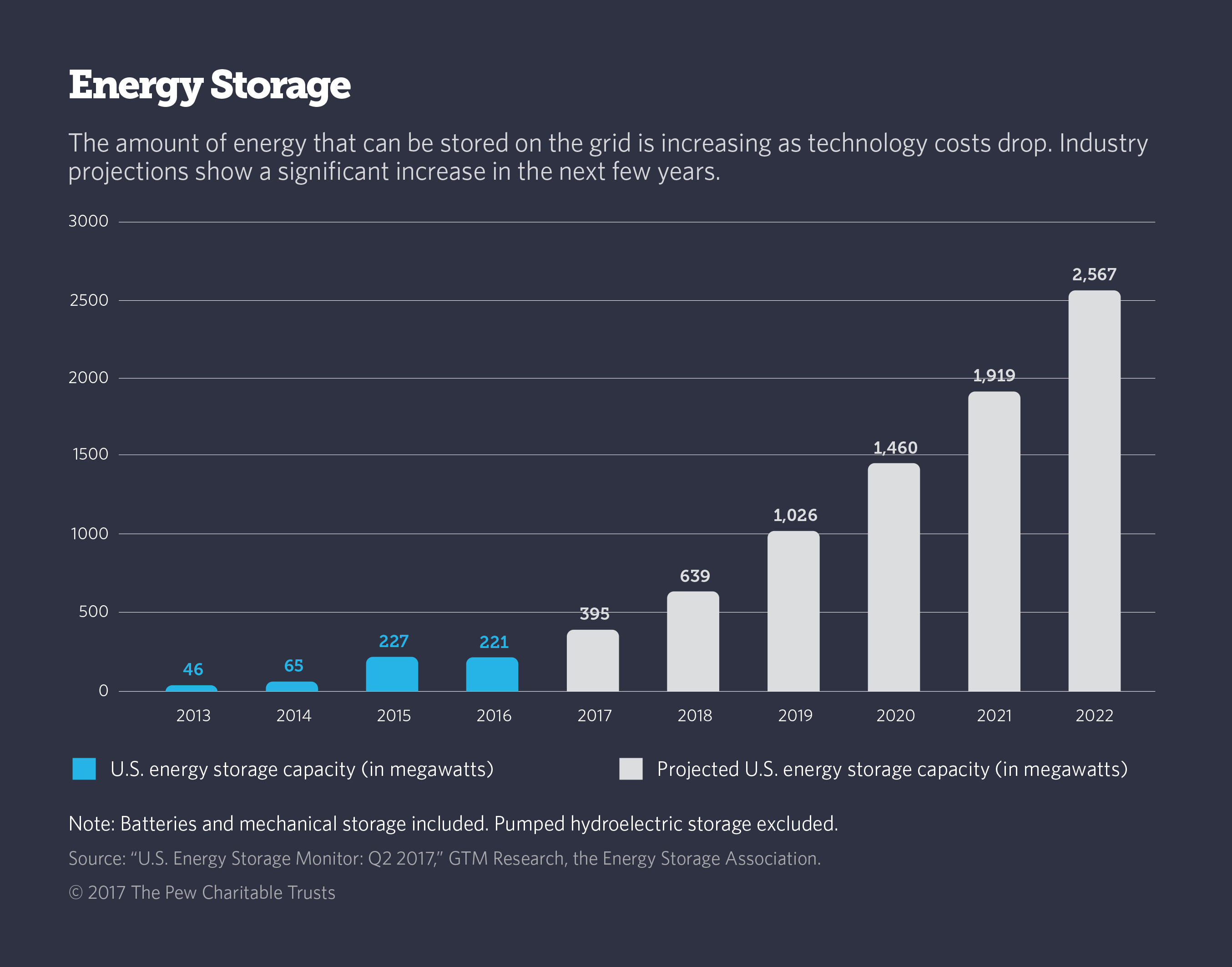 As of last year, 221 megawatts of energy storage had been installed on the U.S. grid. The firm expects that to increase to 395 MW this year and to 2,567 MW by 2022. By comparison, a typical U.S. coal plant has a capacity of 547 MW. On average, a 1 MW battery could power about 500 households, according to Burwen.

“State agency and regulators are waking up and realizing the untapped potential of energy storage,” Manghani said.

The ability to store energy in a cost-effective way has been the turning point for many technologies, such as electric vehicles and smartphones. Storing energy for electricity is not new — hydropower plants, which store energy generated by dams, have been around for generations. But to use that technology, you have to have the space and money to build a dam.

Stored energy can be turned on and off quickly to meet demand and help stabilize the amount of electricity flowing through the grid. But it’s unclear how much these services are worth, making it hard for utilities to know how much they can make from setting up storage capacity. As a result, some utilities have pushed back against requirements that they buy storage.

California enacted the first mandate in 2010, requiring utilities to buy 1,325 MW of storage by 2020. Last year, lawmakers added 500 MW to that target. Oregon also enacted a mandate, with a less ambitious target.

Massachusetts considered setting a requirement, but decided to instead set a target for how much energy utilities should store on the grid. In New York, a bill awaiting the governor’s signature would do the same. Nevada enacted a law to study whether a requirement is in the public’s best interest.

“If the deployment of energy storage is not thought out carefully, it could just as easily become part of those problems adding unnecessary costs, redundancies and idle capacity to the system,” an institute executive wrote in a December letter to Massachusetts officials considering a mandate.

But energy storage proponents, such as Alex Morris of California Energy Storage Alliance, a trade group, say that much of the industry’s growth was fueled by California’s mandate. It also was fueled by the revelation that all of the wind and solar energy being generated in California couldn’t be used at the time it was being produced, and some was being wasted.

Southern California has been short on energy since October 2015, when the second-largest gas leak in U.S. history occurred at an oil and gas field near Los Angeles. After the leak, the wells — the largest provider of energy for the region — were shut down.

AES Energy Storage was among the companies hired by local utilities to connect batteries to the grid. Kiran Kumaraswamy, the company’s market development director, said electric utilities were able to get the projects going quickly because they had been incorporating storage in their long-term plans for years.

Most state initiatives are focused on battery services sold en masse. But some are also considering how to help homeowners and business owners buy batteries.

In Arizona, regulators last year ordered the electric utility in the state to spend up to $4 million to develop a residential battery storage program and a program to facilitate energy storage technologies, saying the efforts could reduce costs for customers. The utility is proposing to spend the full $4 million. In Colorado, a bill proposed this year seeks to clarify that electricity customers have a right to install and use energy storage on their property.

Government-run utilities see opportunities in batteries, as well. Last year, the village of Minster, in western Ohio, became the first utility run by a local government to combine solar power with batteries. It took some time to get the village council on board, according to Don Harrod, the village administrator. The council feared the batteries would catch fire, and didn’t know how the town would dispose of them once they reach the end of their useful life.

Under current rules in many states, utilities aren’t allowed to both generate electricity and provide electricity services, which may prevent providers from also owning energy storage. State lawmakers or the electric commission can change that.

The Interstate Renewable Energy Council, which advocates for renewable energy, says utilities should also be able to profit from all of the services batteries can provide. Sara Baldwin Auck, the council’s director of regulatory programs, calls energy storage a “chameleon technology” because it can help meet many needs, such as stabilizing the grid and providing energy quickly. Buying storage but not being able to provide all of its services “would be like buying an iPhone and only being able to make phone calls with it,” she said.

Massachusetts is one of just a few states that have studied whether investing in energy storage would be cost-effective. The state found that deploying 1,766 MW of storage would give it the best deal. It would cost utilities about $1 billion to buy that amount of storage and connect it to the grid, but the utilities would make about $1.1 billion and electric customers would save about $2.3 billion over 10 years.