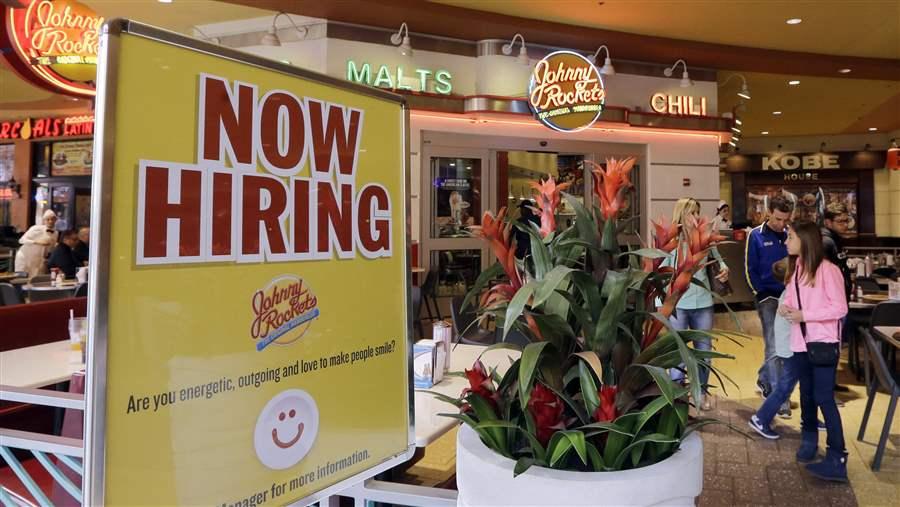 A restaurant in Miami advertises for more employees. In many states, the growing demand for service workers is prompting pay increases.

In 44 states, jobs paying roughly $30,000 were among those that got the largest salary bumps since 2010 — evidence that the steady but modest economic growth of the past half-decade may be reaching people at the bottom of the income ladder.

Restaurant workers in California (who got a 50 percent bump), home health aides in Delaware (28 percent), and hair dressers in West Virginia (28 percent) all ranked in the top five in income growth in their states between 2010 and 2016, according to a Stateline analysis of federal Bureau of Labor Statistics data.

In explaining the wage increases, economists pointed to a shortage of service workers in some high-cost areas, aging baby boomers’ growing demand for help at home, and minimum wage hikes.

The findings dovetail with a recent report by the left-leaning Economic Policy Institute, which found that most workers at all income and educational levels are beginning to see significant wage increases after decades of sluggish growth. However, the group cautioned that economic inequality is continuing to widen, and that “ordinary workers are just making up lost ground, rather than getting ahead.”

“As unemployment gets lower and lower, people at the bottom of the wage scale are finally seeing some impact on their pay,” EPI senior economist Elise Gould said. “They’ve been waiting a long time.”

Some of the workers who got the largest raises perform services for an aging population, such as home health aides in Delaware and Utah and personal care aides in Vermont.

Others are service workers who directly benefit when higher-wage workers have more money in their pockets: In California, Florida, Hawaii, New Mexico, New York and Texas, bartenders made the top five. Fitness trainers in Illinois, Iowa, Maryland, Montana, South Dakota, Vermont and Wyoming were among the workers with the largest raises in those states.

The more lucrative jobs “really propel the area, attract people, and then they create a demand for goods and services that creates secondary jobs,” said Paul Turek, the Washington state economist.

Seattle-area powerhouses Amazon, Boeing and Microsoft have all hired high-paid workers and given them substantial raises since 2010, according to Turek. The state has only recently begun adding a significant number of lower-paying service jobs.

But even in Washington, workers making less than $30,000 got a relatively large bump of 22 percent. The average raise for workers at all salary levels from 2010 to 2016 was 14 percent in Washington state, compared to 12 percent nationally.

In California, the average annual income for bartenders and restaurant servers increased by half between 2010 and 2016. Those were the largest increases in the state, bringing bartenders’ average pay up to more than $32,000 and waiters and waitresses up to nearly $31,000. Housekeepers, farm workers and police officers also ranked in the top 10 for pay increases in the state.

The state’s minimum wage increased from $8 to $10 an hour during that period.

In Silicon Valley, software developers’ pay rose by nearly a fifth to close to $147,000, and marketing managers’ pay increased by nearly a third to about $201,000. But even in the nation’s tech hub, average pay grew more, between 42 and 58 percent, for bartenders, waiters and cafeteria attendants, all making less than $35,000 a year.

In Georgia, which like Wyoming has the lowest minimum wage in the country at $5.15 an hour, the biggest pay increases went to a range of jobs, from low-paid bus drivers and construction workers to financial managers and computer programmers making about $100,000 a year.

Finding entry-level labor like construction workers, whose pay increased more than a fifth to about $33,000, has become one of the main concerns of the state’s employers, said Mark Butler, the state’s labor commissioner. Often those jobs lead to higher-paying skilled construction jobs after a few years, he said.

“We’re pushing way too many kids into going on to a four-year degree, and they’re missing out on some high-paying jobs that may pay more than the ones they’re going to get with that degree,” Butler said.