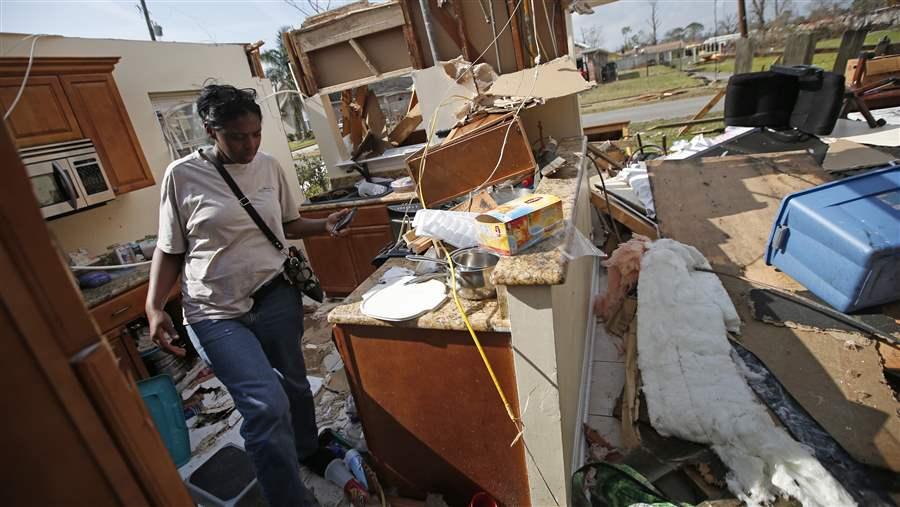 Carla Wilson walks through a house in the New Orleans East neighborhood following a February tornado that destroyed homes and left thousands without power. A new digital mapping technique may help the community recover more quickly.

NEW ORLEANS — On Meredith Beers’ laptop, the intensity of the twister that touched down here in February is marked in green, yellow and red.

The colors illustrate light, medium and heavy damage from the 150-mile winds that tore through the city’s Ninth Ward. Beers and her colleagues at SBP, a nonprofit that specializes in rebuilding homes after disasters, are experimenting with a digital mapping technique that allows them to assess the damage to each home and cross that information with data about insurance and federal financial assistance.

The goal: to get help to the most desperate residents far more quickly — a task that may grow more urgent in the years ahead.

The number of billion-dollar disasters is increasing. Meanwhile, federal officials are considering scaling back Washington’s recovery role, aiming to save taxpayer money and encourage states to prepare for disasters with their own resources. The proposed pullback, along with the threat of more frequent and more intense natural disasters linked to climate change, is already forcing cities and states to change the way they prepare for, and recover from, events like tornadoes, forest fires, floods and hurricanes.

Using her map and the database that supports it, Beers can, for example, quickly create a list of uninsured residents whose homes suffered major damage but who didn’t apply for federal assistance. Armed with that information, SBP can help residents navigate the maze of public and private aid that might be available to them. Local officials also can use the mapping software to guide their decisions about debris cleanup, the construction of temporary housing, and the rebuilding of homes.

SBP volunteers began surveying residents a few days after the tornado struck. Using their smartphones, the volunteers entered data about homeowners’ insurance and pictures of damaged homes into an app. Then, back at her office, Beers used data from the Federal Emergency Management Agency to add to the database the amount of money FEMA and other federal agencies were expected to give each resident.

In under four weeks, SBP collected data on nearly 4,000 homes, and it determined that 245 were in need of major repairs. The group also discovered that 29 percent of people with damage were uninsured. SBP put those uninsured residents, fewer than expected, at the top of the list for help.

Beers said one advantage of using the mapping software is that she can analyze the data in real time, making critical information available to volunteers and other relief organizations almost instantaneously. “They could see the results without me having to take my computer all over town,” she said.

Rebuilding quickly from a disaster is critical, because doing so gives a jolt to the local economy, encourages families to return, and deters blight.

While money from FEMA that pays for temporary housing, medical assistance and home repairs arrives soon after a major disaster has been declared, it rarely covers the entire cost of rebuilding. It can take as long as a year for other types of federal relief to arrive, and depending on the severity of a disaster, it can take years for families to return home.

“It’s the most frustrating thing in the world for us,” said Walter Crouch, president and CEO of Appalachia Service Project, a nonprofit that repairs homes for low-income families, but shifted to disaster recovery following flooding last June in West Virginia. “We want to build. We want to get people back in homes.”

Waiting for nonprofit and federal assistance can be devastating to communities that may have been struggling to survive even before disaster struck. A year after the flooding, West Virginia is just now receiving grant funding from the Department of Housing and Urban Development to rebuild homes in low-income communities.

In April, almost 10 months after the West Virginia flood, Michelle Breeland, a liaison between volunteer groups and FEMA, pointed out that the state was “still early in the case management process.”

At that point, 21 case workers were still slogging through reports for 500 families that were identified as needing help immediately following the flood.

In New Orleans, Beers thinks the mapping technique could eventually help the entire community of disaster response groups, putting local volunteer agencies and long-term recovery committees a step ahead when they begin their work.

“We’ve been here for 300 years,” Beers said. “Not because we’re geographically well-placed — because history would show that we’re actually poorly placed — but because we’re resilient people.”