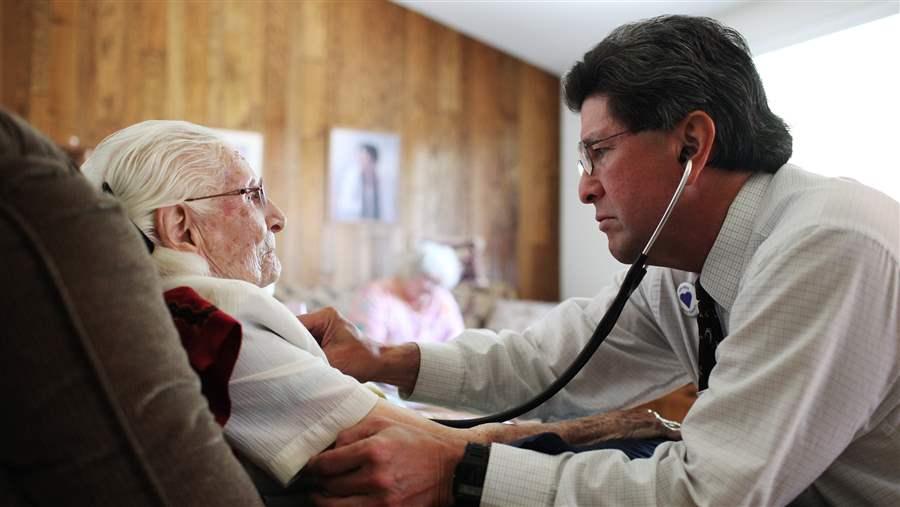 A doctor making a palliative care visit to a 103-year-old patient at her home in Santa Clarita, California. Insurance coverage for community-based palliative care is limited, but some state and federal steps may increase access.

Jeannee Parker Martin’s mother will be 99 this year, and she still lives alone in the house in the Midwest where she raised her children. At 92, she was diagnosed with a slow-moving breast cancer to go along with her vascular disease.

Despite those serious conditions, doctors did not think Martin’s mother was near death, which meant her Medicare plan, like many health plans, did not cover what’s known as palliative care — treatments intended to provide relief from the symptoms and stress of serious chronic disease, such as pain, nausea, dizziness, anxiety and depression, as opposed to the disease itself.

A visiting palliative care nurse likely would have detected and tended to the sores that periodically developed on her legs because of her vascular illness. At least three times over the last four years, Martin said, they became open wounds that required intensive rounds of treatment at an outpatient hospital clinic.

“If someone had been visiting her, it would have not only prevented these wounds from developing but saved tens of thousands of dollars to treat them,” said Martin, who lives in California and asked that her mother’s name and state not be mentioned to protect her privacy. Martin said her mother was not eligible for any other home visitation services under her Medicare plan.

Palliative care has been shown to increase patients’ satisfaction with the care they receive and to save on medical expenses by reducing the need for hospitalizations and trips to the emergency room. One study of homebound, terminally ill patients with a prognosis of approximately a year or less to live, plus one or more hospital or emergency department visits in the previous year, found that the average cost of care for those receiving palliative care services — $95.30 per day — was less than half the cost for those without palliative care — $212.80.

Despite dramatic growth in the number of hospitals providing such care over the last decade, full palliative care services remain unavailable to many patients. But those who work in the field say they are encouraged by several developments over the last five years.

The federal government has used recent demonstration projects to make palliative care more available to patients like Martin’s mother who have serious illnesses but are not in hospice care or hospitalized. And a small but growing number of Medicare and private health insurance plans now offer palliative care services to those patients.

Several states have enacted laws to require physicians, hospitals and nursing facilities to provide patients with certain serious illnesses with information on palliative care and where to get it. Some have also adopted consumer protections to assure the quality of the palliative care delivered.

California has gone the furthest. Gov. Jerry Brown, a Democrat, signed a law in 2014 that will require all Medicaid managed care plans in the state to begin offering full palliative care benefits starting next year.

And in Congress, bipartisan sponsors last month introduced a bill in the House and the Senate that would expand existing pilot projects in Medicare to extend community-based palliative care services delivered by teams of doctors, nurses, social workers and chaplains to patients who are not in hospice care.

“I’m encouraged by the forward movement,” said Jill Mendlen, president and CEO of LightBridge Hospice and Palliative Care, whose doctors and nurse practitioners, Mendlen said, conduct about 175 palliative care visits a month in the San Diego area. But, she said, inadequate insurance coverage still prevents many patients from getting all the palliative care services they need.

Medicare, Medicaid and most private health insurers provide a full array of palliative care services for patients who are hospitalized or in hospice care, including pain management, care coordination, 24-hour help lines, advanced care planning, and social and spiritual services. Their families are also usually eligible for caregiver support services. (Under Medicare rules, to be hospice eligible, patients must be willing to forgo curative treatment.)

The same is not true for patients with serious, debilitating conditions who are not hospitalized or in hospice, which is generally for people who are expected to live six months or less.

Many insurance plans cover some palliative care services, such as pain management. But they tend not to cover services delivered by registered nurses, social workers and chaplains. Many Medicare, Medicaid and private insurance plans offer scant or no coverage of home visits, coordination of care, wound care, social and spiritual counseling, 24-hour hotlines, advanced care planning and family support.

This is particularly true when the insurance plan is a “fee for service” plan, which means providers are paid for each treatment or procedure. Managed care plans, under which providers are paid a lump sum each month to cover the care of each patient, are more likely to cover palliative services.

“If you are not terminally ill and ready to elect hospice, access to palliative care services is really limited,” said Sharon Pearce, vice president for public policy for the National Hospice and Palliative Care Organization.

There appears to be no organized political opposition to the use of palliative care, and most medical specialists working with patients who have advanced diseases incorporate palliative medicine into their care.

Several factors may explain why palliative care is not more widely available. It is a relative newcomer in the field of medicine, and it only became a board-certified medical specialty in 2006. Several studies have found that the number of specialists doesn’t meet the need.

There is also some confusion about exactly what palliative care is.

“The field itself hasn’t yet defined who should get it, what it is, and who provides it,” said Judy Thomas, the CEO of the Coalition for Compassionate Care of California, which advocates for palliative care and hospice services.

Many patients and even doctors shy away from turning to palliative care because they associate it with terminal disease and the abandonment of hope for recovery. Another complicating factor is that the same services are often referred to as “palliative care” or “hospice care,” depending on who is receiving them.

“There was this fantastic moment when people recognized the value of palliative care, but it got mixed up with hospice and this idea that it should only be available to people when they are dying,” said Allison Silvers, vice president of payment and policy for the Center to Advance Palliative Care, which works to increase access to palliative care.

California has done more than other states to encourage palliative care. Since 2001, California has required most physicians to complete 12 hours of continuing education courses in pain management. And in 2014, it enacted a law making palliative care services available to the state’s Medicaid managed care population, which represents about three-quarters of the state’s Medicaid beneficiaries, or 10 million people.

The law was to take effect next January, but the Brown administration pushed back implementation another six months to give state officials additional time to complete regulations laying out who will be eligible for the palliative care services, what those services will entail, who can provide them, and the costs to the state Medicaid agency.

Most states already provide broad palliative services to children with advanced illnesses through Medicaid or the Children’s Health Insurance Program. While states have not moved to require insurers to reimburse palliative care, some have sought to spread information about the benefits of palliative care or assure its quality.

Since 2010, Massachusetts, New York and Oregon have adopted measures to require providers to educate patients with serious illness about the benefits of palliative care and how to access that care. In 2014, Colorado set statewide standards for facilities that provide palliative care.

Recently, the federal government began demonstration projects that extend palliative care to desperately ill patients who would have been considered eligible for hospice care, but were not willing to give up on curative treatment. The bills in Congress would expand that eligibility even further, to patients with advanced illnesses but for whom death is not considered so imminent.

Jeannee Parker Martin says she has belatedly come to appreciate the value of full palliative care services. Her mother became eligible for hospice care late last year as her overall health deteriorated, which entitled her to the services of a visiting palliative care nurse.

“Since then,” Martin said, “her wounds have been under control, and she hasn’t had to go to the hospital once.”