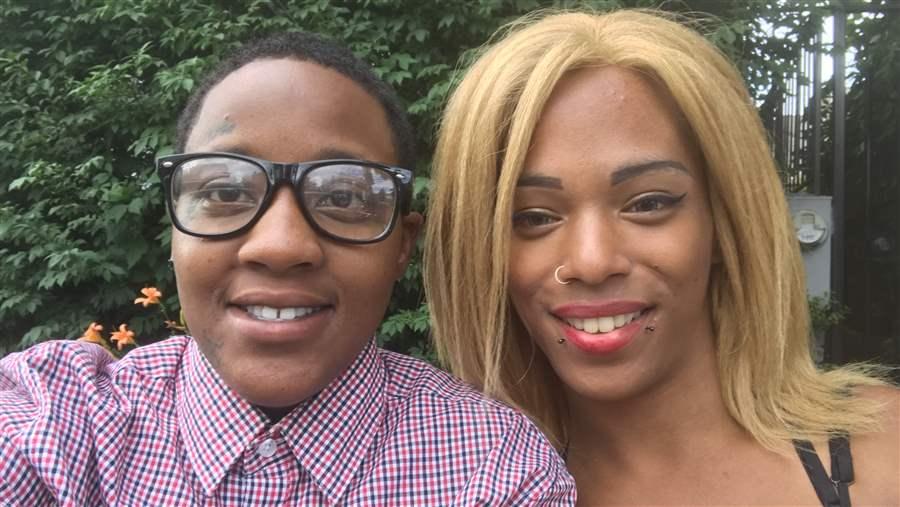 © Courtesy of Selena Cruz and Nell

They are the nation’s invisible homeless population, undercounted for years, hiding out in cars and abandoned buildings, in motels and on couches, often trading sex for a place to sleep. And now, for a complex variety of reasons, the number of youth — teens and young adults — living on the street appears to be growing.

San Diego saw a 39 percent jump in homeless youth over the past year. In Atlanta, the number of homeless youth in 2016 was estimated to be nearly triple that of previous years. After a concerted effort to count homeless young people, Seattle’s King County saw its numbers jump more than 700 percent between 2016 and 2017. And the number of homeless, unaccompanied public school students increased one-fifth between 2012 and 2015.

Young homeless people are at risk for a host of troubles with long-lasting impact, including substance abuse, mental health problems and physical abuse, as well as sexual exploitation. Many get caught up in the criminal justice system. Up to 40 percent of homeless youth are lesbian, gay, bisexual or transgender.

The federal government defines homeless youth as people under age 25 who are living without a parent or guardian. Activists, advocates, researchers and policymakers say it makes sense to think about homeless youth aged 12 to 24 as a group, even though some are just entering their teens and others are well on the path to adulthood. That’s because research has shown that young brains aren’t fully developed until around age 25, and youth don’t fully understand the consequences of their actions.

There’s no one reason for the rise in youth homelessness, said Naomi Smoot, executive director of the Coalition for Juvenile Justice. Communities are just starting to get better data on homeless youth, which may be one reason for the increase. Then again, Smoot said, “it’s the drug crisis, it’s the economy, it’s the cost of housing, jobs being scarce.”

“As a result, growing numbers of young people are having to take care of themselves on the street at a very young age.”

Many communities are stepping up their efforts to deal with the problem. The idea is to intervene early, with services targeted toward the particular needs of young people — before homelessness becomes chronic, and it’s much harder to move them off the street.

In January, the U.S. Department of Housing and Urban Development (HUD) announced $33 million in grants to 10 communities, including four rural ones, to combat youth homelessness. The money will go toward housing, from temporary to permanent, and to more creative approaches, such as “host homes” that place homeless teens with families that have been trained in dealing with young people who have suffered trauma.

San Francisco is receiving $2.9 million under the program, and this month, Mayor Ed Lee, a Democrat, earmarked an additional $1.5 million for homeless youth, mostly for housing subsidies. In May, Washington, D.C., Mayor Muriel Bowser, a Democrat, announced a five-year plan that identifies newly homeless youth in the city and intervenes with services and housing assistance.

In Chicago, a team of lawyers from the Chicago Coalition for the Homeless roams the city in a mobile legal clinic, offering free advice and assistance to homeless young people. And homeless youth advocates in Seattle recently shifted their focus from preparing youth to live independently to helping them reunite with their families.

“If you really focus your resources on getting kids off the street, it works,” said California state Sen. Scott Wiener, a Democrat, who recently hosted a hearing on youth homelessness. “This is a demographic where you can really move the dial. It gets more challenging as they get older.”

Homeless youth over 18 have different needs than, say, minors who could be funneled through child protective services or foster care, said Amy Louttit, who left home at 17 and experienced homelessness off and on into her early twenties. She is now a law school graduate, working as a public policy associate for the National Network for Youth, a research and advocacy group. (Some communities extend foster care to age 21.)

Homeless young people “might have a place to sleep for the night, but they don’t have a key, and they don’t know how long they can stay. Or they have to trade sex for a place,” Hyatt said.

The U.S. Department of Education tallies the number of students without a fixed address. HUD counts the number of youth living on the street, in shelters or in cars at a specific point in time. In 2016, it tallied 35,686 unaccompanied youth, roughly 7 percent of the homeless population. That’s a slight decrease from 2015’s count of 36,907. But advocates for the homeless argue HUD’s definition excludes more than a million unsheltered youth.

Individual communities often conduct their own counts. And as they have focused new attention on youth homelessness, many have improved the ways they count young people, often recruiting formerly homeless youth to help. This may be one reason for the recent increase in numbers, experts say.

Some youth are on their own because they’ve been abused at home or because a parent is addicted. Some struggle with substance abuse or mental health issues themselves. Others are foster care dropouts.

While the majority of homeless youth have been sexually exploited, young blacks, Hispanics and transgender youth are even more likely to face exploitation or violence, said Jody Waits of YouthCare, a Seattle-based youth shelter and services organization. They’re also less likely to have a family they can run back to, she said.

That’s a situation that Nell, 23, knows all too well. When he turned 18, his family kicked him out of their Washington, D.C., home, not because he was gay or transgender, he said, but because they figured it was high time he was on his own. He spent the next couple of years living out of a car.

“My family knows I’m homeless. In some families, when you’re 18, you age out of your home,” said Nell, who now lives in a transitional housing shelter for LGBT youth.

In Seattle, rents have increased 57 percent in the last six years. And though the city recently approved a $15 minimum wage, it’s hard for young adults to find work that pays enough to afford the rent, said Waits of YouthCare.

“It’s not as financially viable to kick-start adulthood as it was 10 years ago,” Waits said.

For the past few years, agencies around the country like YouthCare have shifted their focus to reuniting youth with family members, particularly if they haven’t been homeless for long. Ultimately, Waits said, young people usually gravitate to their parents. And along as it’s safe, that makes sense, she said.

Sometimes a family needs to be connected with counseling. Or maybe it’s as simple as the center helping out with the rent or a utility bill as a condition to moving back in.

Home is usually a better option, even if there’s drama, Waits said. “As long as it’s physically safe for them to be there, it’s still a safer place for them than on the street.”

Ultimately, the best approach to ending youth homelessness is to take many approaches, from family reunification to money for emergencies like avoiding eviction to flexible housing options, said Sherilyn Adams, executive director of Larkin Street Youth Services in San Francisco, a nonprofit that has provided shelter, services and education to homeless youth since 1984.

The key is to match young people in crisis with “the proper support they need to be ultimately independent and on their own,” said Adams, whose organization is working with the city on the HUD grant project.

Young people can’t handle the stress of an adult shelter, said Lisa Thompson, executive director of Project Oz, a Bloomington, Illinois, nonprofit that works with homeless youth. They’re more vulnerable to sexual exploitation there, and they’re more likely to pick up the habits and behavior of the chronically homeless, she said.

As she sees it, a good way to keep homeless and runaway youth out of adult shelters is to place them in host homes, with individuals or couples, whether they have children of their own or not. It’s an approach that Project Oz has used since 1985. There are similar programs in several other states, including Maryland, Minnesota and Nebraska.

Host families undergo 40 hours of training by the state, where they learn everything from how to deal with a child who has experienced trauma to nurturing techniques to conflict resolution, and additional training by the agency before they are licensed. (They are also required to get continuing education courses every couple of years.) Families are reimbursed for expenses and are paid a flat fee when they are required to be on call.

In return, the families provide shelter, food, clothing and a ride to school, usually for no more than 21 days. Meanwhile, social workers work with the youth to help them come up with a long-term plan.

This option works best for older teens who are still minors, because older youth who’ve been living on their own tend to chafe at house rules, Thompson said. The idea is to divert teens from the foster care system, which can be expensive and doesn’t always result in independence for the teens, Thompson said.

It’s a tactic that homeless advocates say they wish would become a trend around the rest of the country, because it’s an effective, low-cost way to provide some stability to chaotic young lives.

Outside the Casa Ruby, a bilingual shelter for LGBT homeless youth in a rapidly gentrifying Washington, D.C., neighborhood, a gaggle of young people cluster in the heat.

Inside, there is air conditioning, security cameras, hugs and neat twin beds. And rules, like a 10 p.m. curfew. Rules are there for a reason: Outside, it can be dangerous. Not all the neighbors like or understand gay and transgender people.

Casa Ruby was started in 2012 by Ruby Corado, a transgender woman who escaped the war in El Salvador only to end up homeless. (She started working with homeless youth 20 years ago and formed the organization in 2004.) Today, it has a drop-in center that helps link young people to food, shelter and services such as case management for HIV-positive transgender women. But demand often exceeds the number of beds she has available.

Youth homelessness is at crisis levels, Corado said. “But in D.C., we’re beginning to address the issue.” In May, the D.C. City Council allocated $500,000 for housing for youth transitioning out of foster care.

One of the regulars at Casa Ruby is Selena Cruz, a small, blonde transgender woman sporting blue contacts. As a young boy growing up in Virginia, Cruz started wearing girls’ clothes. Her father didn’t approve.

Today, she says, she relies on sex work — and Casa Ruby — to get by.

Still, she says, “It feels like jail a little bit here.”

The rules suit MaCia Pickett-Fowler, a 24-year-old student, just fine. She’s terrified of what will happen in October when she’s too old to qualify for youth services in the city.

“No one chooses to be homeless,” Pickett said. “I just need to be held up for a little while longer. I need a hand up, not a handout.”