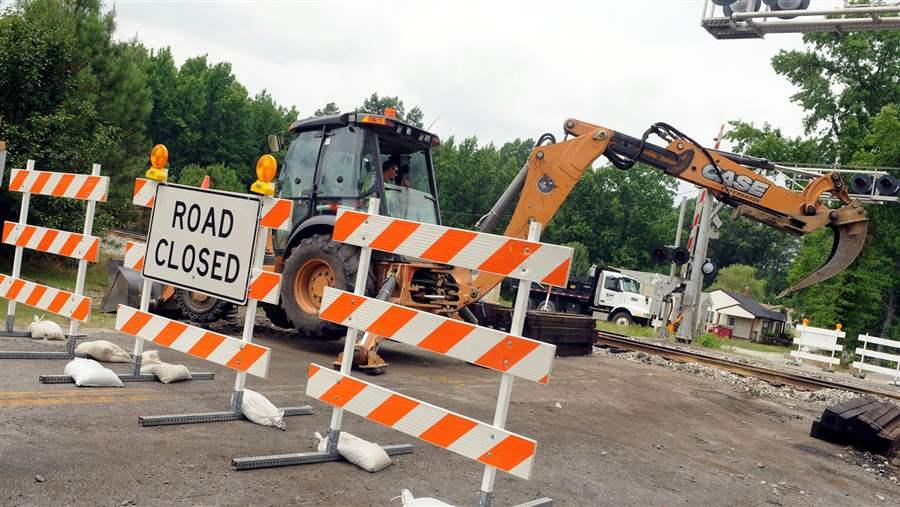 A crew conducts maintenance work on a railroad crossing in Chesterfield County, Virginia. Virginia’s Department of Transportation is using apprenticeships to train workers for road construction and maintenance jobs.

MIDLOTHIAN, Va. — “Let’s make sure we’re clear on terms,” the instructor said, summoning the next presentation slide onto the big screen behind him. Obscurities such as “borrow excavation,” “grubbing” and “subbase” didn’t faze the 21 apprentices in the room. They were almost all young men, many sporting baseball caps and sunburned necks. They’d been working on construction sites for months.

Welcome to the Virginia Department of Transportation’s latest hiring strategy. While President Donald Trump and state lawmakers around the country extol the benefits of apprenticeships — and put money behind grants and tax credits to encourage private sector companies to offer them — some state agencies are creating their own paid training programs for employees.

As state agencies face a wave of retirements, training programs such as apprenticeships can help fill open positions, give workers the skills they need, and reduce turnover. Here in Virginia, Democratic Gov. Terry McAuliffe set aside funds in 2015 to expand federally registered apprenticeships at state agencies.

“It makes perfect sense for state agencies or county governments to utilize registered apprenticeships,” says Patricia Morrison, the division director at the Virginia Department of Labor who leads the state’s efforts to expand apprenticeships. The programs create a pipeline of younger, entry-level workers who will eventually replace retirees, she said.

Nationally, more than half a million apprentices are registered with the federal government, and many more — potentially up to a million — are employed in unregistered programs. Registered programs have to meet certain standards, and apprentices who complete such programs receive a journey worker credential that’s recognized by industry and the U.S. Department of Labor.

The University of Virginia — which Virginia considers a state agency — has had apprentices in its facilities department for 35 years. Last fall, 500 people applied for the program, and just 13 were hired, giving it a lower acceptance rate — 2.6 percent — than the university itself.

In general, however, it’s rare for a state agency to offer registered apprenticeships, Morrison says. They can be expensive. And while some agencies have a long tradition of training workers, or an interest in doing so, others don’t.

All About the Credentials

Anthony Larry, 32, was one of the more talkative students in the road construction and drainage class that met recently at John Tyler Community College. He raised his hand repeatedly, and at one point he swung a foot swaddled in bandages — he’d injured it playing rugby — up onto the desk in front of him to elevate it.

He learned about the state’s apprenticeship for highway construction inspectors while working in maintenance at the Virginia Department of Transportation. Although becoming an apprentice meant taking a pay cut, he jumped at the chance to get on track to a higher-paying profession and take college courses for free. “Down the road, it opens so many doors,” he said of the program.

Transportation department inspectors monitor road building and repair projects, ensuring the work is structurally sound and the government is being billed properly. They need to know everything about road construction, from how to work with different types of soil to relevant environmental law.

Over the two-year program, Larry and his fellow apprentices, who are currently in their first year, will spend most of their time working under a senior inspector. They’re paid for their time spent in class, earning college credits they can put toward a degree or certifications they can show to future employers. They receive a journey worker credential when they complete the program, which they can use to find work in other states.

Creating an apprenticeship program was easy because the agency had a long-standing training program that already met the classroom and work-hour requirements for a federally registered apprenticeship. The agency had just never formally worked with the state Department of Labor to register the program.

“We were looking for an opportunity to take a training program that we had and align it with the governor’s intention to increase the number of workforce credentials in the state of Virginia,” said Bill Danzeisen, the transportation department’s technical training manager.

In 2015 the department registered its program and began using the community college system as a training partner, rather than the consultants it had used before. The agency took advantage of McAuliffe’s executive order, which set aside $120,000 to help state agencies create apprenticeships — parceled out as $1,000 per apprentice, up to $10,000 per program.

The money only covered part of the additional cost of the new program structure, Danzeisen said. Still, he said, the apprenticeship will pay off for both the department and its contractors. Some trainees will eventually leave for jobs in the private sector, but chances are they’ll return to the agency at another point in their career.

And the apprenticeship program is popular. Last year, 600 people applied for 40 open positions. Currently about a hundred people are enrolled.

Danzeisen says he’d like to add more apprenticeships. About eight months ago the department created a one-year apprenticeship for transportation operators, who do maintenance and drive heavy equipment. In the future, the agency may work with career and technical high schools to create an apprenticeship for vehicle mechanics.

The 34 licensed vocational nurses currently enrolled in the one-year apprenticeship are paid to work 20 hours a week and also are paid to study at a community college 20 hours a week. When they complete the program, they’ll be ready to become registered nurses and get a big salary bump. Ideally, they’ll continue to work for the state.

There are more than a hundred openings for registered nurses across the prison system that the state is desperate to fill. California Correctional Health Care Services and the Service Employees International Union Local 1000, which represents state workers, hope that the apprenticeship program will help develop a staff of prison nurses who are likely to stay in their jobs for longer.

“Working with prisoners is not necessarily everyone’s cup of tea,” said Joyce Hayhoe, director of legislation and communications for California’s inmate health care system. Turnover in some positions can be high, and it’s costly to recruit new nurses and train them to work in a prison environment.

The state grant will only cover the cost of training three groups of apprentices over three years, union officials say. And it doesn’t cover all the costs of the program. The prison health care system has to pay other licensed vocational nurses overtime or use contractors to fill in for the apprentices while they’re in class.

Hayhoe says the agency decided that the expense was worth it. But expanding the program will depend on whether the agency can secure more funding.

In Virginia, not all agencies have embraced apprenticeships. Only four took advantage of the governor’s incentive money: the transportation department, the University of Virginia, George Mason University, and Morrison’s own division at the Department of Labor. “One thousand dollars per apprentice is not that big of a selling point,” she said.

Morrison says the agency officials she talks to tend to be worried about the logistics of creating and managing an apprenticeship program. Human resources managers usually want to hire people who are ready to hit the ground running, and it can be hard to convince them to embrace training, she said.

Danzeisen says he hasn’t heard of any state transportation agency embracing apprenticeships the way Virginia’s has, although many officials he bumps into at regional and national conferences say they’d like to try. “A lot of the questions are, ‘How do you get started?’ ” he said.

He noted that an apprenticeship that works well for one agency in one state might not work as well elsewhere. In some states, highway maintenance and construction happens at the county and city level rather than the state level. Transportation agencies in such states might not need so many inspectors, he said.