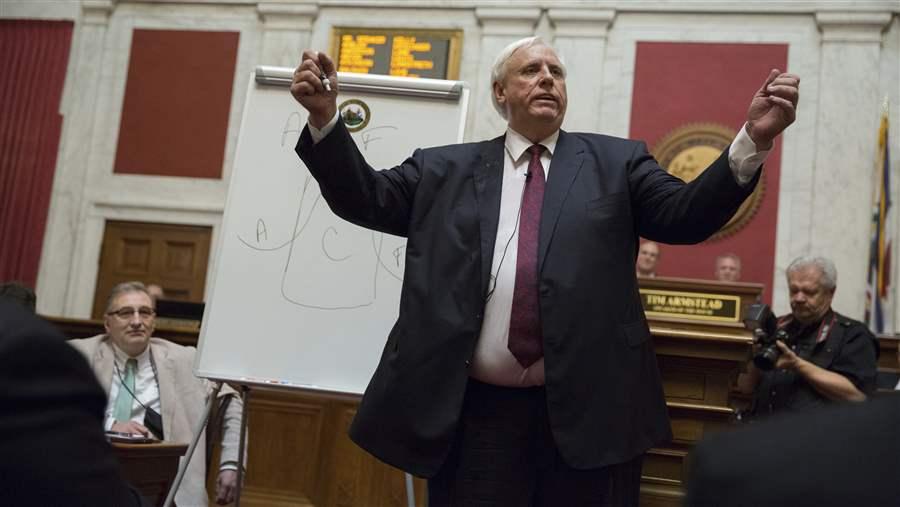 Democratic Gov. Jim Justice of West Virginia delivers his State of the State speech in January, in which he stressed the need to expand sales taxes to services. In the nearly two dozen states, including West Virginia, where proposals to extend sales taxes have been debated, none has passed.

As states struggle to align their tax codes with the modern service economy, expanding sales taxes to include activities like personal care, home repair, funeral services, computer maintenance and similar enterprises would seem to be a logical move. But states are finding it’s not so easy.

Twenty-three state legislatures considered proposals this year to impose taxes on at least some services. But so far, none has made it into law intact — and most died outright. And in several states, new taxes on services that took effect this year are so complicated that tax offices are writing clarifying memos, like the one in North Carolina to distinguish between roof repair (taxable) and roof replacement (not taxable).

“There were lots of big ideas to [tax services] in the states,” said Ryan Maness, senior policy analyst at MultiState Associates, a trade group that tracks state taxes. “Each one of those has fallen away.”

In 1966, long before major U.S. factories began shutting down and jobs moved overseas, industries producing goods accounted for more than a third of gross domestic product. By 2016, that kind of manufacturing was down to 18 percent of the economy, according to the federal Bureau of Economic Analysis. Over the same period, the services industry grew from half of GDP in 1966 to more than two-thirds in 2016.

Another challenge is that taxes on services are regressive, with a disproportionate impact on low-income residents, and are sometimes seen as an unfair way to plug a budget hole or reduce other taxes, prompting opposition from advocates for the poor.

“The services that get pulled into these plans … are not necessarily the ones that bring in the most revenue, but the ones that are more politically viable,” said Meg Wiehe, deputy director of the Institute on Taxation and Economic Policy, a study group that looks at the distributional effects of tax policy. 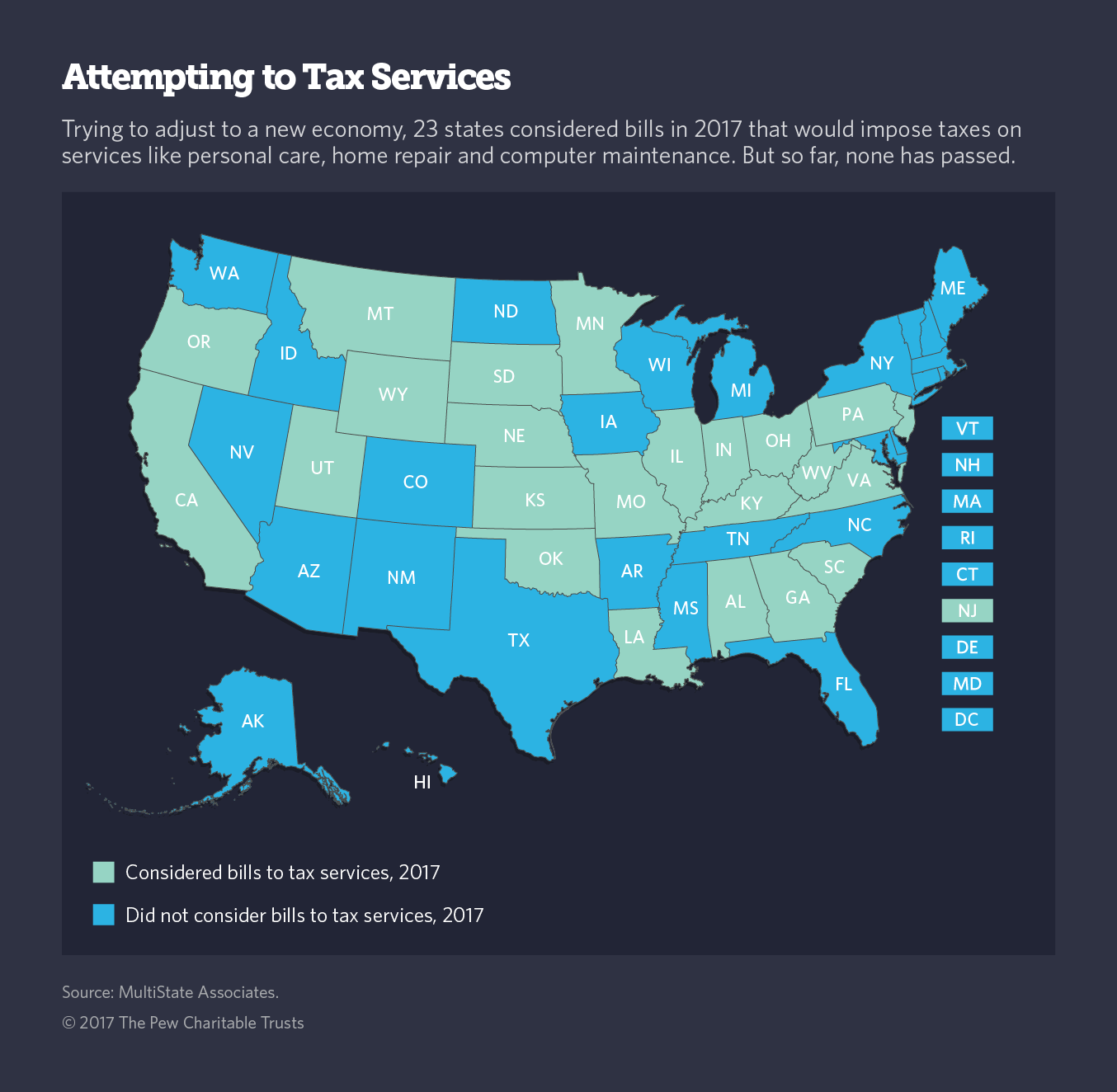 In Oklahoma, Gov. Mary Fallin called for a “sales tax modernization” in her budget message this year. “As the economy in the United States has shifted from a manufacturing based economy to a service based economy, the way we impose taxes and collect revenue no longer reflects the current economy, but an outdated system that has not changed much since its inception,” she said.

Fallin initially proposed expanding the state’s 4.5 percent sales tax to broadly cover services, with the goal of raising an additional $839.7 million annually. Partly because of a decline in oil revenue, Oklahoma faced a nearly $900 million shortfall in its $7.8 billion budget. As a tradeoff, the Republican governor proposed removing groceries from the items subject to the sales tax along with lowering corporate taxes.

She was not specific on the services to be taxed, but a report from the progressive Oklahoma Policy Institute suggested that they could include activities like home repair, auto services and washing, service contracts, funeral services, cable television service and overnight trailer park rentals.

But the outline immediately ran into trouble both from anti-tax legislators who predominate in the conservative state, and service industries that could have been affected. The funeral home industry called the proposal a “death tax” and argued that families already burdened with thousands of dollars of funeral expenses didn’t need a sales tax bill on top.

“Should I smoke? I am going to pay a price. They're going to tax me more. But I still have a choice of not smoking,” funeral home owner Jerry Dillon told a Tulsa, Oklahoma, ABC affiliate in February. “But death is gonna happen. Let’s not take advantage of a grieving family at the worst times of their family's life.”

Lt. Gov. Todd Lamb, a Republican, objected too, saying the tax on services would hurt small businesses like plumbers, barbers and attorneys, and quit his post in Fallin’s cabinet, although he stayed on as lieutenant governor.

Those kinds of sentiments, along with a requirement for a three-quarters majority in the Oklahoma Legislature to approve a tax hike, killed most of Fallin’s proposal. Oklahoma lawmakers agreed only to increase the $1.03 cigarette tax by $1.50 a pack, labeling it a “fee” to get around the three-quarters rule. They also removed the existing sales tax exemption on vehicle purchases, and put a sliding fee on sports ticket sales. Those changes, plus a handful of others, were estimated to raise $486 million a year, a little more than half of what Fallin had hoped to raise.

In West Virginia, Gov. Jim Justice, a Democrat, set the stage for this year’s legislative session with an ambitious proposal to increase several taxes and fees, including an extension of the sales tax to professional services, with the new revenue to be used in part to fight the opioid epidemic that has ravaged the state.

The Republican-led Legislature considered myriad tax bills, including ones that would have raised the state’s 6 percent sales and use tax to 7 percent, and applied it more broadly to services including trash hauling, funerals, cosmetology, barbering, telecommunications and nonmedical personal services.

This month, after weeks of negotiation and a special legislative session, the Legislature passed a slimmed down budget that did not include any tax hikes.

“There is no plan here,” Justice said. “All this does is kick the can down the road.”

Senate President Mitch Carmichael, a Republican, had called for lowering the income tax while expanding the reach of the sales tax to include things like data processing and telecommunications services. But he found that the services that are exempt from sales tax “are incredibly popular” and that other exemptions to the sales tax that have grown up over the years have constituencies too.

“Our code is riddled with those types of exemptions,” he said. “Things like electronic data processing is exempt, polling services are exempt, and health clubs.”

Some of the West Virginia proposals would have paired the sales tax hike with a cut in income taxes. Paul Blair, strategic initiatives director for Americans for Tax Reform, a low-tax advocacy group, said that would have been a good policy because it would have meant “on net, the taxpayers aren’t losers.” But that didn’t happen.

Even in states that have been able to navigate the legislative and political thicket to expand sales taxes to services, problems remain.

Since North Carolina began implementing a tax on some services this year, which was enacted in 2016, the Department of Revenue has been flooded with questions about what is taxable and what is not. There have also been inquiries about how to collect and remit taxes from businesses that have never had to worry about it before, according to Schorr Johnson, public affairs director for the department.

“People are looking for guidance, especially in clarifying the definitions … about what is and what is not taxable,” he said.

Services that are now subject to tax include air conditioning and heating repairs, re-keying locks by a locksmith, repair of a water pump motor, jammed garage door or electrical switch, and unclogging a drain. But if a homeowner wants to build an addition and include a new bathroom, that new construction is not taxable.

The North Carolina Legislature is considering another bill to further define what is taxed and what is not, including further differentiating the kinds of garden care subject to the tax. Under the bill, servicing indoor plants in pots would be exempt, while caring for outdoor gardens would be taxed.

In other places that tax some services, trying to parse whether there is a tax on snow removal services requires study. In Ohio, services that use “mechanized” means, like trucks and snowblowers, are subject to tax, but only if annual revenue exceeds $5,000. That kid with a shovel next door? No taxes.

There are no taxes on snow removal in places where you would assume it would bring in plenty of money — Maine, Massachusetts, Minnesota and New Hampshire. And in Pennsylvania, snow removal is not taxable, unless it is to remove snow from gutters and downspouts.

Wiehe, of the taxation institute, said comprehensive sales tax reform, including taxes on services, will happen only when it is broad-based and not piecemeal.

In any case, many lawmakers are already looking ahead, anxious to tax newer innovations rather than services, which started to take a larger portion of the economy decades ago.

“Lawmakers across the country have been very accepting of moves to tax the gig economy, digital downloads, Amazon purchases, and getting online retailers to collect and remit tax,” Wiehe said. “But on this [tax of services] we missed out. The ’80s and ’90s would have been the time to tax services.”