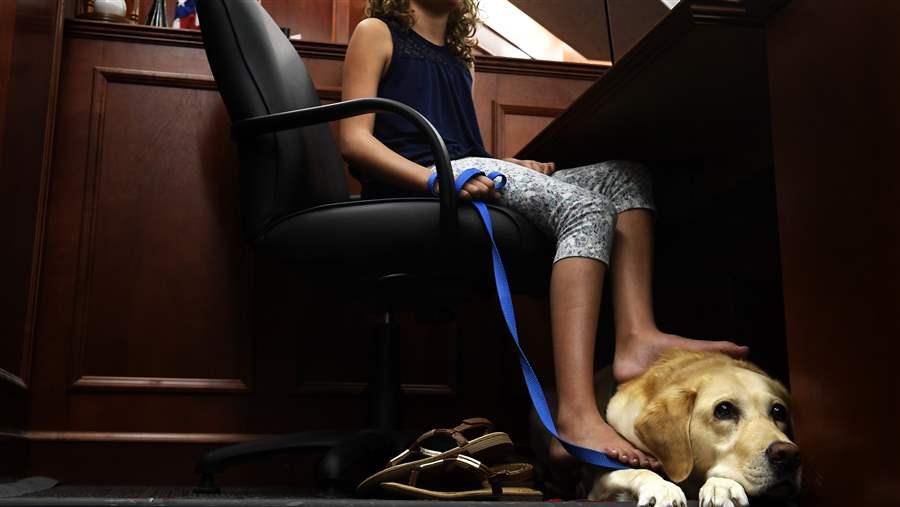 A girl with a facility dog named Pella that she has helped train, in a Centennial, Colorado, courtroom. The specially trained canines are being used to help calm victims and witnesses during the legal process.

Child abuse victims often are frightened and intimidated if they have to testify about their experience in a courtroom. So a growing number of courts across the country are allowing specially trained dogs to accompany them — and other vulnerable people — on the witness stand to help calm them and ease the process.

Sometimes dubbed “courthouse facility dogs,” these canines lie quietly in the witness box, offering a supportive presence that helps victims and witnesses compose themselves and tell a jury what happened.

Supporters say the dogs, often Labradors, golden retrievers, or a mix of both, have made a huge difference in helping children and vulnerable adult victims and witnesses open up on the stand.

But some defense attorneys say having a friendly, sweet-looking canine in the witness box can prejudice a jury against a defendant by making the witness appear more believable and sympathetic.

Courthouse facility dogs are placed with handlers who are usually prosecutors, investigators or victim advocates. In some jurisdictions, the dogs aren’t used during trials but provide support when victims or witnesses are interviewed or deposed. Some also help out offenders in juvenile, drug and veterans courts.

A courtroom dog was used to help Mississippi child abuse victims as far back as the mid-1990s, but in recent years the practice has taken off across the country. Today, at least 144 courthouse facility dogs work in about three dozen states, from Hawaii to Massachusetts. At least a third of the dogs have assisted in the courtroom, said Ellen O’Neill-Stephens, founder of the Courthouse Dogs Foundation, a nonprofit that promotes the use of professionally trained facility dogs during legal proceedings.

In many states, judges decide on a case-by-case basis whether the dogs can be used in court. But at least seven states — Arizona, Arkansas, Florida, Hawaii, Idaho, Illinois and Oklahoma — have some type of law allowing courtroom canines to help people on the witness stand, according to Deborah Smith, a senior analyst for the National Center for State Courts. (Maryland lawmakers have approved pilot programs in two counties, but they have not started yet.)

State laws vary as to who can be helped by a canine in a courtroom and under what circumstances. Some laws apply only to children; others include crime victims or vulnerable adults such as those who are intellectually or developmentally disabled. Most specify that the dogs must be graduates of certified assistance dog organizations.

In Idaho, Republican Gov. C.L. “Butch” Otter signed a bill into law in March that will allow facility dogs to remain with children on the witness stand in criminal matters and noncriminal cases involving child abuse or neglect, unless a judge finds it would prejudice a defendant’s constitutional rights.

“It’s not an easy situation for a child to testify against someone that might be their parent or family member,” said Idaho Republican state Sen. Shawn Keough, who sponsored the measure, which goes into effect in July. “To allow a facility dog at the witness stand seemed like a humane thing to do.”

O’Neill-Stephens, a former prosecutor in King County in Seattle, got the first trained facility dogs into courtrooms there almost by accident more than a decade ago.

Her oldest child, who was born with cerebral palsy, had a service dog, Jeeter, who O’Neill-Stephens started taking to juvenile drug court to help teens who came from dysfunctional families and had emotional problems. Then she began getting requests for the dog to help sexually abused children who had to testify in court.

As the demand grew, she created a more formal program, and in 2004, Ellie, a Labrador mix, became the first professionally trained facility dog in the country to work in a prosecutor’s office. The idea was for the canines to be graduates of assistance dog programs and for the handlers to be prosecutors, victim advocates or police officers.

Similar to police dogs, facility dogs live with their handlers, who undergo up to two weeks of training. While the canine has already been trained and is certified not to be disruptive in a public setting, the handler needs to learn how to get the dog to perform as needed.

O’Neill-Stephens said most of the nonprofit assistance dog organizations that train the dogs and their handlers do it for free. The others charge fees ranging from $3,000 to $10,000, she said.

While the number of courtrooms that allow facility dogs in the witness box has grown, the practice is causing concern among some defense attorneys, said Smith, of the state courts center.

The National Association of Criminal Defense Lawyers declined to comment about the use of dogs in the courtroom.

But Smith said some defense attorneys worry that the dog’s presence might make a victim or witness seem more credible to the jury, and hurt the defendant’s case. “The dog gives a sense that the child is now comfortable enough to tell the truth,” she said. “It gives a leg up to the witness as far as veracity.”

But Smith said that defendants who have appealed a guilty conviction and argued that the dog’s presence prejudiced the jury have not won any of those cases.

John Ensminger, an attorney who has written about legal issues involving working dogs, said defense lawyers have reason to be worried about allowing facility dogs in witness boxes — and he doesn’t think they object enough to the practice.

“Nobody knows how juries will be influenced by this,” he said. “It may be that if you get enough ‘dog people’ on a jury, you’re going to increase your chances of conviction.”

Ensminger said independent research is needed to determine whether having a canine in the witness box can alter a jury’s perceptions.

Dalton, the Washington state judge, said she doubts facility dogs have a prejudicial impact. Instead, she said, a dog’s calming effect on child witnesses sometimes can end up helping a defendant.

“I’ve seen jurors visibly impacted by kids so stressed on the witness stand that they start crying or shut down. Jurors look like they want to leap over the jury box and cuddle that kid,” Dalton said. “So having the dog there helps everybody on both sides.”

In the legal world of courts and dogs, the terms used to describe different categories of canines can be confusing.

In general, facility dogs are working animals that help people in the legal system and other institutional settings. They often receive training similar to service dogs, which are trained to perform tasks for a person with a disability such as blindness. Under the Americans with Disabilities Act, a disabled person has the right to be accompanied by a service dog in most public places, including courthouses.

Therapy dogs, which have received less training and often are brought to hospitals and nursing homes, also have been used to provide support to victims and witnesses during interviews and testimony in some courtrooms. Occasionally, so have comfort animals, untrained companion dogs that provide emotional support to owners who may have anxiety or other mental disorders.

Judges who agree to allow a dog in the witness box can place limitations on its use. Some don’t want the jury to be able to see the dog, so they may send jurors out, have the dog enter the witness box and lie down, and then have the jury return. Some put up a shield so the jurors can’t see the dog. Some announce the dog’s presence; some don’t.

O’Neill-Stephens said her group thinks it’s important for judges to let jurors know there’s a dog present whether they can see it or not.

“The dogs often fall asleep and can start snoring. Some start dreaming and whimpering,” she said. “Jurors won’t know where it’s coming from.”

While facility dogs often are used to help victims testify, sometimes they assist witnesses to crimes.

That’s what happened in Anderson County, South Carolina, where a 38-year-old developmentally disabled woman saw a man breaking into a house across the street. Inside, he murdered his stepfather and stabbed his mother. He was sentenced last August to life in prison.

The woman was called to testify but was uncomfortable speaking in public and terrified of the defendant, who was representing himself and would be personally cross-examining her, said Assistant Solicitor Chelsey Moore. So Roma, a facility dog assigned to the 10th Circuit Solicitor’s Office, accompanied her on the stand, relaxing her and allowing her to testify, Moore said.

“The dog helped this woman very much,” said Moore, who is the canine’s handler. “In fact, she still comes back to visit Roma.”