Willie Parker, 69, shows pictures of his flood-damaged home in Baton Rouge, Louisiana. Parker is waiting for help from Rebuilding Together Baton Rouge, a nonprofit that shifted its focus to flood victims following torrential rains last summer.

Part Three of Storm Surge: How States Will Have to Step Up As Disasters Become More Frequent and Expensive

The house sits half a block from the flood plain in this suburban pocket just outside the city limits, but when torrential rains overwhelmed nearby rivers last August, the water swept in, rising five feet high.

Like thousands of her neighbors whose properties were never expected to take on water, Jackson didn’t have flood insurance, so she had to rely on money from the Federal Emergency Management Agency to gut and repair her home.

But this spring, after living in a hotel for months and spending her entire FEMA payout on repairs, Jackson was no closer to coming home. It was then that volunteers from a local nonprofit arrived to install new floors, replace the kitchen cabinets and finish other projects that remained after her FEMA money ran out.

“I know I couldn’t get this house back together myself,” Jackson, 65, said as she worked on finishing touches in late April.

Private donors and nonprofits like Rebuilding Together Baton Rouge, which helped Jackson, are expected to spend more on disaster recovery as natural disasters become more frequent and expensive. But philanthropy experts caution that while post-disaster giving, made easier by the internet, has become ubiquitous, foundations and nonprofits need to adjust their tactics to focus not only on immediate disaster response, but on reinforcing communities to better withstand disaster and supporting long-term recovery efforts.

It can take months to dole out federal payments to homeowners, and many times there isn’t enough money to fully repair devastated homes. Private money helps to some extent, but after the initial rush of volunteers go home and donations dry up, many homes are still not completely restored.

“If you think about the delay in federal money, it’s private philanthropy that fills the gap,” said John Spain, the executive vice president of the Baton Rouge Area Foundation, which has given more than $5.5 million to area churches, schools and other nonprofits for flood relief since August. 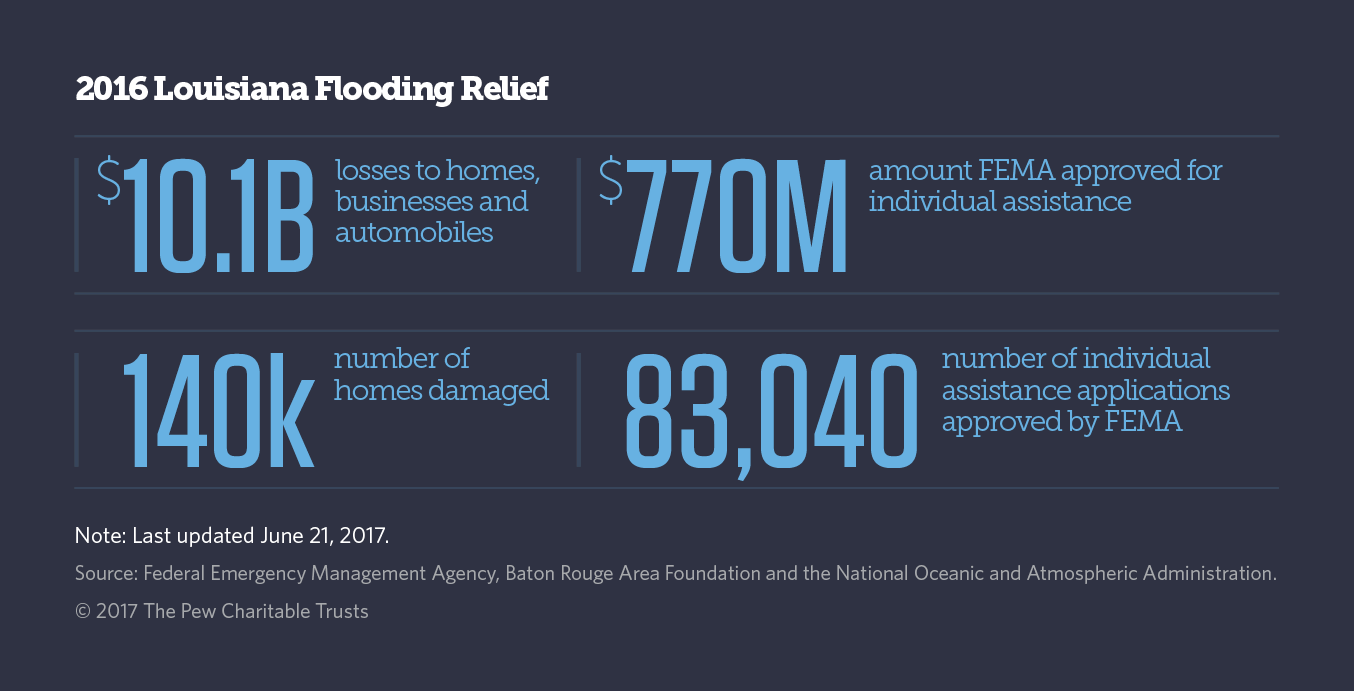 Disaster relief groups that step in immediately after a storm often lack the resources to continue serving communities that need long-term help. It is hard to quantify just how much private money is needed in Baton Rouge and surrounding localities, Spain said, but he knows his group and others like it haven’t raised enough to help everyone.

Jackson was unwilling to talk about the final cost of repairs, but Chris Andrews, the executive director of Rebuilding Together Baton Rouge, said his organization dispatched volunteers and paid for several thousand dollars’ worth of work and supplies at her home.

“We just started contacting homeowners and asking if they needed assistance and they all, without fail, did,” said Andrews, a semi-retired Methodist minister.

Typically, the organization focuses on upgrades like wheelchair ramps and shower stall grab bars so low-income, aging residents can stay at home, but in the wake of the flood, Andrews said his group’s focus has shifted to flood victims.

They have refurbished 18 houses since August, which is usually how many they attend to in an entire year. Their volunteers are doing bigger projects than usual — replacing drywall, installing flooring, and building entirely new kitchens.

“Most of them would have been potential legitimate clients for us,” Andrews said. “They fit the age demographic, they fit the income requirement, and they are living in houses that they’ve occupied for 30 or 40 years with a lot of deferred maintenance.” 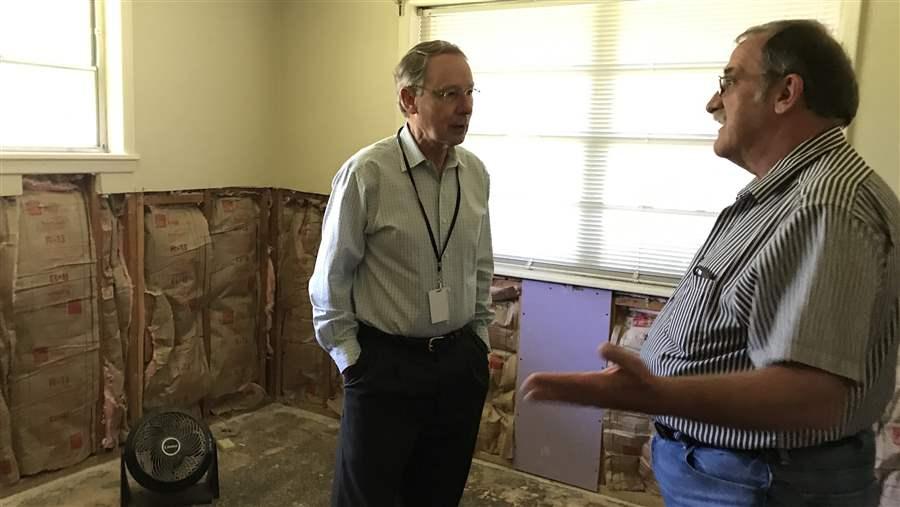 Chris Andrews (left), executive director of Rebuilding Together Baton Rouge, talks to a volunteer as they prepare to repair drywall in a Baton Rouge home that was flooded last August.

Americans have gotten good at responding to the immediate aftermath of natural disasters. Following a major storm there is often a rush to donate money and supplies while volunteers, organized by churches, schools, and first responder organizations like the Red Cross parachute into affected areas.

But that is not enough. Private donors and nonprofits need to expand their recovery focus to include improvements before disasters strike and long-term recovery to help communities rebuild quickly and affordably, said Robert Ottenhoff, the president and CEO of the Center for Disaster Philanthropy.

“We’re able to rescue people to put them in temporary housing. We’re able to provide them with food and clothing,” he said. “We’re not as well coordinated in terms of what it takes to do the long-term recovery.”

Sometimes organizations lack the volunteers, money and plans to stick around for long-term work. But one Louisiana nonprofit is proposing a solution to that.

SBP, a rebuilding organization that originated in St. Bernard Parish 11 years ago, following Hurricane Katrina, has launched a pilot program with the state under which the nonprofit will be reimbursed for some of the construction work it does. 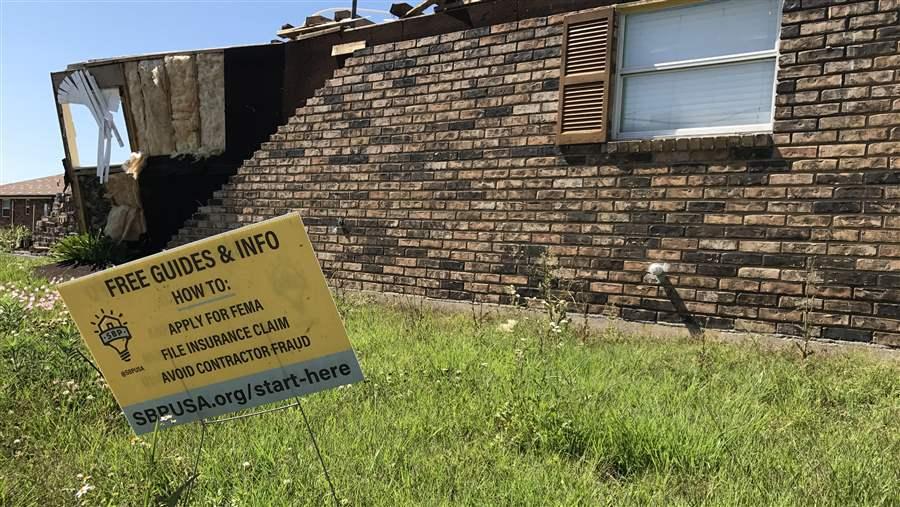 SBP, a nonprofit that helps homeowners rebuild after disasters, advertises its services in a New Orleans neighborhood that was hit by a tornado in February.

The idea is to speed up recovery efforts by repairing homes before homeowners get money from the federal government. The program enables homeowners who cannot afford a market-rate contractor to take out a loan and use those funds to hire SBP to do their repair work. Once the federal money arrives, homeowners use it to pay off the loans.

The organization’s co-founder, Zack Rosenburg, said this process will expedite repairs for homeowners caught up in red tape and allow the group to put its cash toward other recovery projects. It will also help communities bounce back from disaster, he says, by getting people back in their homes and reducing blight that appears when houses get abandoned because a homeowner cannot afford to rebuild.

“There is a human toll to a delayed recovery,” he said. “It also has financial consequences, too.”

Pat Forbes, executive director of the Louisiana Division of Administration, says he hasn’t seen anything like the SBP plan before. It could make a difference in future disasters because the state can count on swift rebuilding that won’t be hamstrung by federal timelines.

“It is an opportunity for them to jump in and start helping some people get back in their homes before our program is ready,” Forbes said at the end of April, noting that money from the federal Department of Housing and Urban Development to help last August’s flood victims had arrived just two weeks before.

In the first government study to assess just how much gets spent on disasters, the U.S. Government Accountability Office found that between 2005 and 2014, 17 federal agencies had spent $277.6 billion on disasters.

But that money could be at risk as FEMA, President Donald Trump and think tanks mull ideas for shifting more disaster costs to states. States have told FEMA officials that they cannot afford to rebuild from a major disaster without federal help and Ottenhoff is clear that private groups can’t fill the financial gap between them.

“It’s hard for me to see how [we] could fill the void if the federal government pulled out,” Ottenhoff said.

A turning point came in 2010 when the Red Cross collected millions of dollars as donors committed to one-time $10 donations via text message in response to an earthquake that leveled Haiti’s capital and killed hundreds of thousands of people.

In 2014, individuals donated more money to disaster relief than foundations, corporations and bequests combined. But the amount of private money collected after a disaster is still dwarfed by what the federal government provides.

For example, the federal government committed about $60 billion to the Superstorm Sandy recovery, while private relief donations only came to a few hundred million, Ottenhoff said.

In fiscal 2014, the federal Disaster Relief Fund had $15.2 billion to spend whereas U.S. foundations spent just $226 million on disaster efforts that year, according to the Center for Disaster Philanthropy.

Disasters tend to attract people who want to give in response to the awful events they witness on the news. The majority of money collected to help victims arrives in the weeks following an event and drops off shortly thereafter.

“The community feels like, OK, what happened to all of those resources that were coming?” said Rowdy Gaudet, an assistant chief administrative officer with the city of Baton of Rouge.

But a storm that gets a lot of media attention is likely to draw more money.

Last June, for example, after massive flooding in West Virginia, counties that were in the news raised more recovery money than their less publicized neighbors, said Michelle Breeland, a FEMA liaison who works with volunteer agencies that respond to disasters.

In Baton Rouge, the August storm that dumped 7.1 trillion gallons of rain on Louisiana was overshadowed by the summer Olympics and the 2016 presidential campaign.

Floods generally tend to get less attention than hurricanes, which mount with drama and tension for days before they strike. It also doesn’t help that floods, including last year’s, don’t get named by the World Metrological Organization the way hurricanes and tropical storms do.

In 2016 there were 15 disasters in the U.S. that caused $1 billion or more in destruction, but only one, Hurricane Matthew, was a named storm. The Baton Rouge flooding caused an estimated $10.1 billion in damage and some people compared the devastation to that brought by Hurricane Katrina in 2005.

But save for the occasional pile of discarded furniture or a FEMA trailer parked in a front yard, it’s hard to tell that anything went wrong here. From the street, homes look untouched. But inside, walls and furniture are growing mold.

“The drama of this is not there, and that affects funding for the nonprofit sector,” Andrews said.

All of this has made it difficult for nonprofits to raise money for ongoing recovery efforts in Baton Rouge.

The group needs more money to keep helping the homeowners and nonprofits that have yet to recover, but Sarah Haneline, a vice president for the group, expects fundraising over the next few years to be difficult, especially because 20 percent of its local donors who give to United Way through their employers are flood victims.

“We think for most people, they’re not going to be fully recovered within a year,” she said.