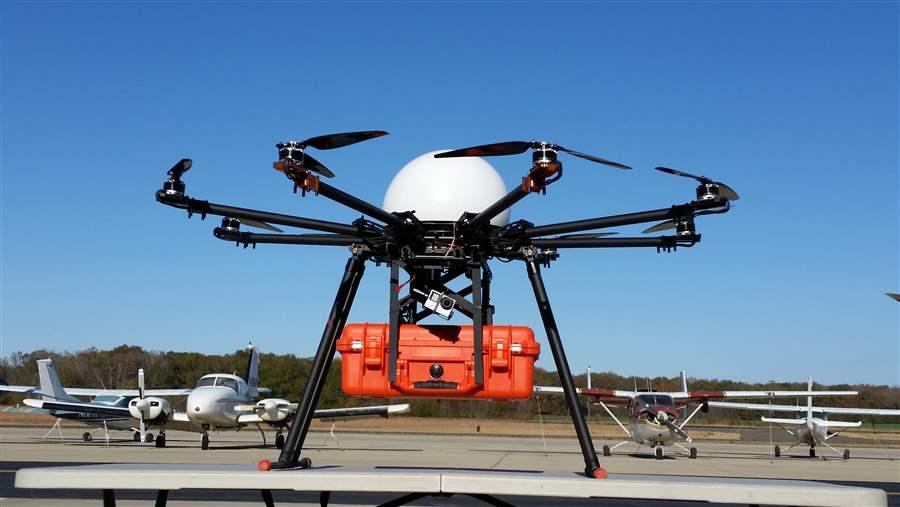 A prototype of an interactive medical drone being developed in Mississippi that could be in use by the end of the year. The drones will enable doctors to instruct survivors at the scene of a disaster to give medical aid.

The towering tornado that struck Hattiesburg, Mississippi, in 2013 ripped roofs off houses, twisted steel girders as though they were Play-Doh, obliterated buildings, and tossed cars through the air like toys. It barreled down Hardy Street “like a bowling ball,” said Dr. Italo Subbarao.

In the aftermath of the twister, Subbarao, an associate dean and disaster medicine specialist at the William Carey University College of Osteopathic Medicine in Hattiesburg, sent his students out to study how quickly emergency medical teams had responded to the disaster. The tornado, with winds up to 170 mph, had injured at least 80 people. In some cases, the students found, emergency medical responders had been slowed by fallen trees, power lines and debris as they tried to reach the injured.

That research led Subbarao to wonder if there was a way to deliver medical care before emergency responders could navigate the mayhem that comes with a natural or man-made disaster. His answer: a drone outfitted with audiovisual equipment and medical supplies.

By combining the two technologies, drones and telemedicine, a doctor miles away could instruct a layman at the scene in how to provide rudimentary, but perhaps life-saving, medical care.

Subbarao’s project, which he began the year after the Hattiesburg tornado, has now produced three prototypes and conducted several demonstration flights. It appears to be the most advanced attempt to equip a drone with audiovisual equipment so doctors and survivors can interact in an emergency. Subbarao said he has gotten inquiries from state officials in Arizona, Louisiana, New York and Texas. Emergency management officials from Dallas, New York City, Phoenix and Washington, D.C., have reached out to him, as have officials from Europe, the Middle East and Africa.

Drone technology has been around for at least half a century, and for years people in health care have speculated about the medical use of drones, for example to transport medicines, organs for transplants, blood supplies and anti-venom serums.

But to date, very few of those possibilities have been realized, in part because of the federal rules governing drones. By law, non-military drones can only be operated within the pilot’s line of sight, during the daytime, and at altitudes no higher than 400 feet.

The most extensive use of drones for medical purposes appears to be in Rwanda, where last year drones started dropping medical supplies to hospitals. In the U.S., Remote Area Medical, a nonprofit that delivers medical care to isolated regions around the world, did a test drop of medications in a mountainous area of southwest Virginia in 2015. The next year, Field Innovation Team, a nonprofit that devises technological solutions to disasters, ran a test off the coast of Cape May, New Jersey, to carry a blood sample from a ship two miles out in the Atlantic to a doctor on shore.

They now have three rotary-winged drone prototypes capable of carrying medical kits weighing up to 20 pounds. (The legal limit for drones in the U.S. is 55 pounds.) So far, the project has been financed by the schools, but the inventors said they will soon begin seeking grants to continue the work.

They have already held several successful demonstrations, including one in December for representatives of the U.S. Department of Homeland Security, federal law enforcement agencies and the United Nations. They are working with the state on integrating the medical drones with existing emergency systems, and Subbarao says he hopes to have a real-life medical drone in operation before the end of the year.

Lee Smithson, director of the Mississippi Emergency Management Agency, said, “This is going to be a phenomenal way to provide immediate medical attention anywhere in the state.” Noting Mississippi’s frequent poor rankings among states in measures of well-being, he added, “It’s about time that Mississippi leads the nation in something good for a change.”

The plan, Smithson said, is to eventually station a drone in as many as nine different areas of the state, so every place in Mississippi is within two hours of a medical drone.

Chris Sawyer, medical director of Remote Area Medical, isn’t surprised by the broad interest in the project. “It is revolutionary,” he said.

It’s also not altogether a surprise that the idea of an interactive medical drone arose in Mississippi. The state is frequently visited by tornadoes, some of which have caused substantial numbers of deaths and injuries. The state has a shortage of doctors and, according to Smithson, many areas of the state cannot be reached quickly by medical responders.

“We had a tornado in January,” Smithson said. “All the debris prevented us from getting in there with search and rescue and medical care.”

Despite the federal restrictions on civilian drones, the Federal Aviation Administration does grant exemptions. Part of the agency’s challenge, according to Cornelius Thiels, a surgical resident at the Mayo Clinic who writes about medical drones, is balancing requests for permission with the need to assure that the airways do not become dangerously congested.

“We’re still a little way away from a regulatory system as nimble as we need it to be, particularly in the case of emergencies,” Thiels said.

The Mississippi inventors of the interactive medical drone want to fly far beyond line-of-sight, perhaps scores of miles beyond, and to fly day or night. Lott said the FAA has cooperated with the Mississippi program and is now able to give emergency permission for test flights within two hours of a request.

The current prototypes can only fly up to 5 miles, at speeds up to 40 mph, Lott says, but he’s working on another model that could travel far greater distances, up to 100 miles.

The drones carry a suitcase with medical supplies and equipment. The audiovisual equipment comes in two varieties: stand-alone cameras with microphones and speakers, and interactive goggles that can be worn by someone on the ground. In either case, a doctor from a remote location could instruct a survivor to train the camera on victims or parts of the body to assess their condition.

The doctor could give instructions on taking readings such as blood pressure, temperature, heart rate, or sugar or oxygen levels, using equipment dropped by the drone. And the doctor could talk a survivor through ways of giving aid, such as applying tourniquets, cleaning, clotting or bandaging wounds, and injecting medicines.

Smithson of the state Emergency Management Agency said the medical drones will not only save lives in the field, but also help coordinate emergency medical care all over the state in a disaster, with doctors from far away able to make triage decisions and ensure that patients get taken to the most appropriate facility for their injuries.

“This is no longer in the realm of science fiction,” he said. “The sky’s the limit.”