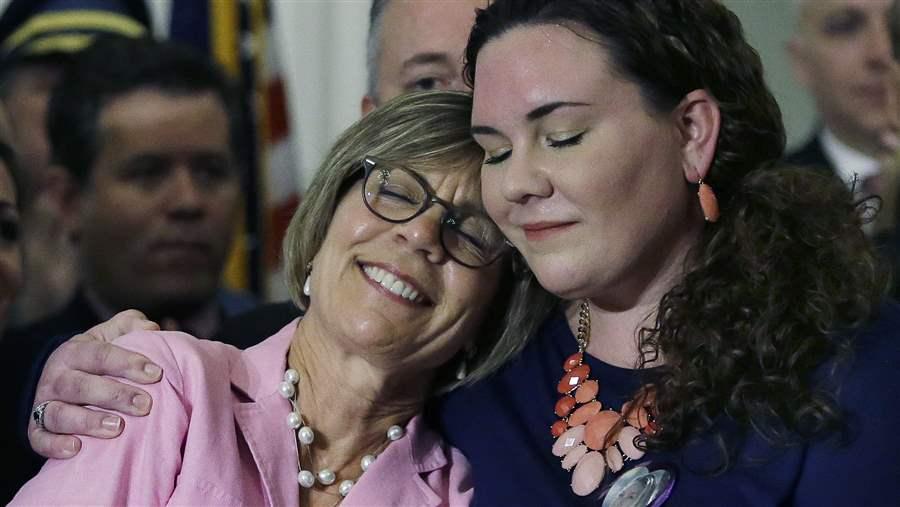 A Massachusetts woman whose daughter died of a heroin overdose is hugged by her other daughter at a ceremony marking Republican Gov. Charlie Baker’s signing of a package of opioid addiction measures. Baker has proposed expanding the use of civil commitment for people addicted to opioids.

Editor's note: This story has been updated to reflect the new civil commitment law in Utah and to correct the title of Arthur Schut. He is the former CEO of Arapahoe House.

Amid an opioid addiction epidemic that is killing more than 90 Americans every day, there is a growing movement to make it easier for relatives and health care providers to quickly secure court orders to forcibly confine and treat people who are addicted to drugs.

Most states have civil commitment laws primarily designed to protect people with mental illness from themselves and others. Many of the laws include drug addiction and alcoholism as a justification for temporary confinement, or at least don’t preclude it.

But in practice, most commitment laws have been ineffective when it comes to people who use heroin and other opioids, in part because some judges have been leery of taking away a person’s civil liberties for what society has long perceived as a moral failing.

Unlike people with severe mental illness, people who are addicted to drugs typically retain the mental capacity to take care of their basic needs, even though the chronic disease alters the brain, making the person eventually value drug use above all else.

New Hampshire, Pennsylvania and Washington are considering new civil commitment laws specifically designed for opioid use. Kentucky has gone back to the drawing board after failing to enact a commitment law for opioid addiction last year.

And in Massachusetts, the one state where civil commitment has been used extensively for opioid addiction, Republican Gov. Charlie Baker wants to make it even more common.

When they are in session, Massachusetts judges typically approve civil commitments within an hour. But when an overdose occurs at night or on weekends, relatives or physicians seeking an order are out of luck.

In May, Baker said he would renew his push for a measure, which he first proposed in 2015, that would allow emergency-room physicians to hold opioid-addicted patients for up to three days without a court order, when they fear patients may harm themselves by using drugs again.

Historically, confining people against their will has been fraught with moral and legal ambiguities and haunted by reports of abuse.

But the parents of young adults who use opioids are pushing state lawmakers and governors to make intervention easier, even as physicians and state health officials search for ways to break the cycle of repeated overdoses.

Addiction professionals generally agree that civil commitment can save lives. But they argue that without effective treatment, confining people with an addiction may do more harm than good.

“People who use substances and have addictions still have civil rights,” said Dr. Alex Walley, director of an addiction medicine fellowship at Boston Medical Center. “The real question is whether effective treatment is available, which in the case of opioids, is going to be medication. And it’s not OK to limit it to just one medicine,” Walley said.

Another concern is whether the state can ensure that continued treatment will be available once the person is released, he said.

Most states have civil commitment laws that allow health professionals and relatives to petition a court for the involuntary commitment of people with drug addiction or alcoholism if they can be shown to be endangering themselves or others, according to the National Alliance for Model State Drug Laws.

But with the exception of Massachusetts, antiquated state commitment laws are rarely used to detain people with opioid addictions, for a variety of reasons.

Historically the laws have been used so infrequently to detain people with drug addictions that many police, family members, physicians and local judges are unaware of them, said Sherry Green, president of the alliance. And on the rare occasion someone tries to use a civil commitment law, county judges tend to be reluctant to grant petitions because insufficient case law exists to substantiate taking away a person’s civil rights, she said.

But the Massachusetts law is far from ideal. According to the American Civil Liberties Union, Massachusetts is the only state where people with addictions who have not committed a crime are held in prisons.

In 2014, the ACLU and other civil rights groups sued Massachusetts for locking women up because of their addictions. The state responded in 2015 by enacting a law providing for women to be held in a state mental hospital instead, and renovated the hospital to include opioid treatment beds designated for women who have been civilly committed.

In most of the rest of the country, commitment of people with alcoholism or drug addiction is rare, and typically brief, just long enough for them to sober up, Green said.

In all states, once a person with addiction is committed, the state becomes responsible for their care until they are released. Until now, she said, states have been reluctant to make it easier to commit people for drug addiction because most states lacked the resources to provide the needed treatment.

Commitment laws in seven states (Alabama, Arizona, Idaho, Illinois, Nevada, New Hampshire and Wyoming) specifically excluded drug addiction as a legal justification, according to a 2016 report by the state drug laws group. And in five other states (Maryland, New Jersey, New Mexico, Oregon and Utah), commitment laws for mental illness made no mention of drug addiction or alcoholism and no separate laws existed for drug use. (At least one of those states, Utah, has since passed a commitment law for opioid users.)

State laws also vary widely in the amount of time people can be held against their will, ranging from one day to one year. The conditions that must be met to commit someone also vary, as do the people who can petition for a commitment.

In Delaware and Indiana, anyone can seek commitment of a person they believe is in need of treatment. Other states require a family member, health professional or police officer to petition for a commitment. Some require an addiction treatment administrator or state or local health official to make the request.

The new bill in Pennsylvania, sponsored by Democratic state Sen. Jay Costa, would allow parents to have a doctor examine their adult child and write a treatment plan, and then appear in court and ask a judge to make the plan mandatory.

In New Hampshire, a bill sponsored by Republican state Sen. Jeb Bradley would allow family members to petition the court to have an addicted person confined in the state mental hospital for treatment.

Washington’s bill, proposed by Republican state Sen. Steve O’Ban, would amend an existing civil commitment law to add opioid use as a sufficient cause for commitment. Under the proposal, people may be detained if, within a 12-month period, they have been arrested three or more times for drug-related crimes; have been hospitalized for drug use; or have three or more visible track marks indicating intravenous heroin use.

Most addiction experts maintain that because drug addiction is characterized by compulsive drug use despite harmful consequences, the use of commitment laws is theoretically appropriate.

Research has shown that people who are coerced into treatment for drug addiction are just as likely to achieve sustained recovery as those who seek it voluntarily.

In fact, the vast majority of people who go into addiction treatment are pushed into it by probation, parole, drug courts, family members or employers, said Arthur Schut, a consultant and former CEO of Arapahoe House, a rehab center in the Denver metro area.

“It has the largest population of coerced patients in any medical field. The problem is that you have people who are gravely impaired in terms of how their brains work and are a danger to themselves and often are unable to make the decision to get treatment,” he said.

But without effective treatment, holding people against their will can do more harm than good, said Dr. Mark Willenbring, founder and CEO of the Alltyr Clinic, a rehab center in St. Paul, Minnesota. After withdrawing from opioids during confinement, people’s resistance to drugs declines and once they are released, they are at high risk of overdosing, even if they use the same dose of the drug they used before.

“Civil commitment in most places isn’t really treatment.” It’s typically some type of 12-step program, if anything, he said. “Medication is what works for opioid addiction. It’s a settled matter. It’s only controversial from the standpoint of people who don’t like what the science shows.”

But for parents, short of having their adult children arrested for possessing an illegal substance, civil commitment can be their only recourse.

“We need to find a way to make it easier for families and loved ones to intervene to find help for adult children,” Marcia Taylor, president of the Partnership for Drug-Free Kids, said in an email. “This is a life and death matter for countless families and we need laws that protect individuals at risk of overdose and help them get the medical treatment that they need.”