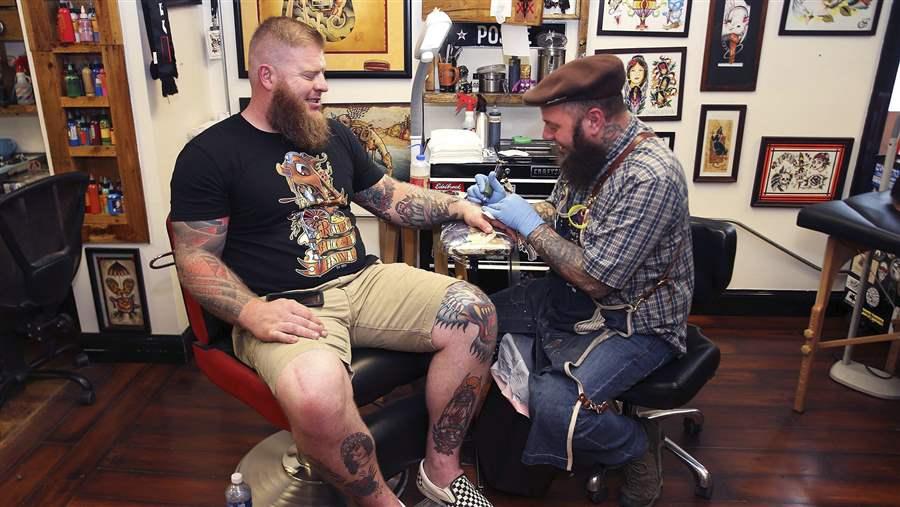 A man gets a U.S. flag tattooed on his hand at Jack Brown’s Tattoo Revival in Fredericksburg, Virginia. As tattoos, piercings and other body art becomes more popular, state regulators are racing to keep up.

Anyone who goes into a tattoo parlor in North Carolina can be assured that it has a permit from the state health department and that inspectors have checked the premises for safe and sanitary conditions.

But go for a body piercing in the Tarheel State and there’s no such protection. A state law, approved in the 1990s, regulates tattoos but doesn’t apply to other forms of body art.

“Most people think it’s all regulated,” said state Rep. Kevin Corbin, a Republican. “But we found out there’s no law on the books.”

North Carolina is not alone. State legislators and health officials across the country are trying to keep up with the growing popularity and evolving trends of body art.

Health officials worry that unregulated body art studios may not follow safe practices, which can lead to scarring, nerve damage and infections, including hepatitis C, the leading cause of liver cancer in the U.S.

“The body art industry is much more nimble than the government,” said Doug Farquhar, who tracks body art legislation in the states as the director of environmental health for the National Conference of State Legislatures.

Nearly four in 10 people born after 1980 have a tattoo and one in four have a piercing some place other than an earlobe, the Pew Research Center has reported. (The Pew Charitable Trusts funds both the center and Stateline.)

Besides tattoos and pierced navels, today’s self-expression through body art may include branding, scarification (scratching, etching or cutting to produce a design in the skin), or subdermal implants (placing objects under the skin for ornamentation).

Nearly every state has some type of body art law, but laws vary widely. Most states do agree on one thing: age limits. At least 45 states prohibit minors from getting tattoos, and 38 states prohibit body piercing and tattooing minors without parental permission, according to NCSL.

In the last four years, states have considered 167 bills on body art and tattooing, and 33 have become law, Farquhar said.

Oregon, for example, extensively rewrote its tattooing regulations in 2012, updated them last year, and in January clarified that “microblading,” in which a practitioner uses fine needles and pigment to create eyebrow hairs, is tattooing and not an aesthetic, or cosmetic, practice.

Oregon requires practitioners to have hundreds of hours of training and pass written exams before being licensed for specific types of body art. Georgia is among states that do not regulate or certify the body art industry, but most Georgia counties have adopted ordinances.

Maryland does not license body artists, though it requires them to use sterile instruments, wash their hands, wear disposable gloves during procedures, and cleanse customers’ skin. They also must maintain three years of customer records and make them available to health officers if requested.

But some Maryland localities, such as Baltimore, do require licenses. In Nevada, which has no state body art regulations, local ordinances, such as in Las Vegas’ Clark County, prevail.

North Carolina is one of at least six states considering body art legislation this year. Corbin co-sponsored a bill updating the tattoo law to include other types of body art. It passed the state House in April and is under consideration in the Senate.

The sharp increase in hepatitis C cases in the last few years has intensified states’ concern about sterile and sanitized needles and equipment and associated health and safety training.

The number of new hepatitis C infections in the United States tripled between 2010 and 2015, to more than 2,400, the Centers for Disease Control and Prevention reported last month. The CDC blames the increase on the rise of injection drug use associated with the opioid epidemic and says major research studies have not shown hepatitis C to be spread through licensed, commercial tattooing facilities.

“However,” the CDC said, “transmission of Hepatitis C (and other infectious diseases) is possible when poor infection-control practices are used during tattooing or piercing.”

Corbin was a Macon County commissioner last year and a candidate for the North Carolina state Legislature when he heard from his county health officers about the rising rate of hepatitis C and the gap in state law regulating body art.

Macon County environmental health specialist Jonathan Fouts explained his frustration inspecting a tattoo shop: “Usually beside the tattoo room is the piercing room. I felt like I was only doing half of what I should be doing, since I couldn’t say anything about the piercings and needles.”

Corbin took the problem to the North Carolina Association of County Commissioners, which made a body art bill a legislative priority. Then the freshman representative took the issue to Raleigh.

“I don’t personally have any piercings and I don’t plan to have any, but if someone wants to have them, more power to them,” Corbin said. “We want them to be safe.”

Health officials have worried about the health risks of tattooing for decades. New York City banned tattooing in 1961, citing concerns about hepatitis, a virus that attacks the liver. Tattooing continued underground, however, and the ban was eventually lifted in 1997.

In 2015, New York Gov. Andrew Cuomo signed a law requiring tattoo artists to use single-use ink and needles. The body art community protested that the law’s language was overly broad, and Cuomo, a Democrat, rescinded the measure. The state Health Department is developing new rules.

Another potential health risk is tattoo ink, which is not regulated or tested by the federal government. But no outbreaks of infection from contaminated ink have occurred since 2012, the U.S. Food and Drug Administration reports.

It’s unusual for any industry to want regulation, but body art practitioners say regulations make everyone safer. In the absence of comprehensive government rules, the Association of Professional Piercers adopted its own standards. The association also offers online, industry-specific training in how to minimize the hazards of bloodborne pathogens, such as hepatitis and HIV.

San Francisco body piercer Steve Joyner of the Association of Professional Piercers has helped about two-dozen states write legislation over the last two decades, an experience he describes as eye-opening.

“The downfall of politicians is that they really don’t understand our industry,” he said, adding that many state legislators have never set foot in a tattoo or piercing studio.

Joyner is working with the National Environmental Health Association and the Association of Food and Drug Officials to update the national Body Art Model Code.

The old code was written in the 1990s, when bloodborne pathogens and medical waste disposal didn’t get as much attention as they do today. States and localities will be able to adapt the new code to their needs.

“It’s meant as a guide to best practices for regulators and also for the regulated community,” said Sandra Whitehead, director of program and partnership development for the environmental health association.

The code-writing committee, which includes industry representatives and state and local health workers, has been working a year and a half. The goal is to publish the new code in October.

“When you have everybody at the table, it takes a little longer,” Whitehead said.

One of the first instances of body art practitioners asking to be regulated was in Florida, where a piercing law was enacted in 1999 with input from the industry. Tattooists soon started lobbying for state regulations too.

“The tattoo industry wanted to ‘pedigree’ their profession. That’s the word they used,” said Gina Vallone-Hood, environmental administrator for the Florida Department of Health’s Bureau of Environmental Health.

The Florida Legislature passed a tattoo law in 2010, and the Department of Health started licensing tattoo artists in 2012. Currently 450 piercing shops and 6,000 tattooists are licensed in Florida.

Michael Crea, a piercer for 20 years who owns a shop in Sarasota, is president of the Florida Environmental Health Association. Crea also runs the state’s body piercing certification class that is required for piercers.

“You really don’t want people working out of their house,” he said. “We do deal with blood and body fluids. We break the skin. You can be spreading hepatitis, MRSA [methicillin-resistant Staphylococcus aureus] or AIDS, and you don’t want that.”

But Crea and other body art practitioners say that even when regulations are on the books, enforcement can be weak. Health inspectors often are responsible for checking out a wide range of potential hazards — from septic tanks to swimming pools — and can’t be expert in everything.

That’s why the environmental health association will feature a live tattooing demonstration at its annual conference in July in Grand Rapids, Michigan.

“It will be a safe space for health inspectors to ask questions,” said Christl Tate of the environmental health group. “Our mutual goal is protecting the public health.”