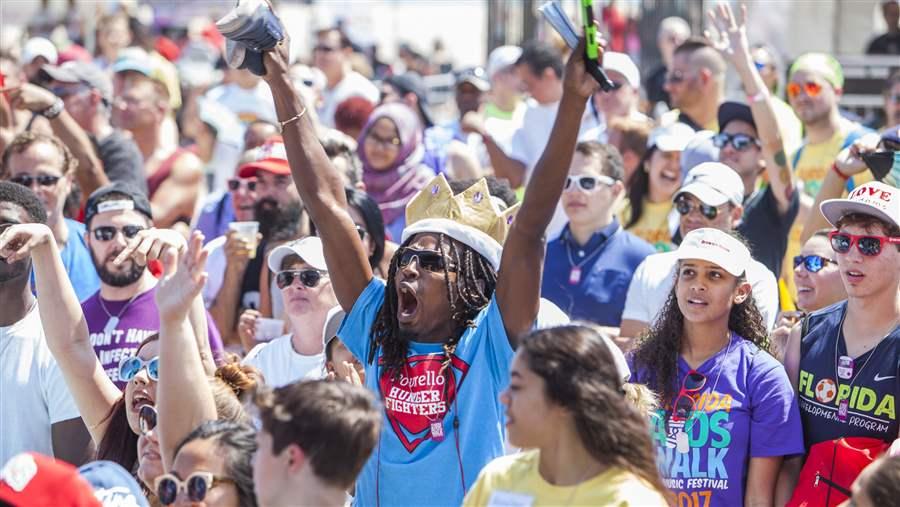 Participants at a Florida AIDS walk and music festival on Fort Lauderdale Beach in March that raised over $1.4 million to support local HIV/AIDS services. In parts of the South, public health officials say new policies and programs are providing hopeful signs in the fight against the disease.

Twenty years ago, Darlene Robertson moved back home to rural Louisiana to die. At the time, HIV was a death sentence, so she made her peace with it.

But then something happened: Medication got better, which meant Robertson got better. “My doctor told me that I would die of old age before I die of this disease,” said Robertson, 68, now the chair of the Louisiana AIDS Advocacy Network, a nonprofit that educates state legislators about HIV/AIDS.

She’s hoping life will soon get better for others living with HIV in her state. “Louisiana’s doing pretty good,” Robertson said. “But not as good as it could be.”

Louisiana and other Southern states have the highest rates of new HIV and AIDS diagnoses, the largest percentage of people living with the disease, and the most people dying from it. As AIDS death rates decline in the U.S., they are also declining in the region, albeit more slowly. But in pockets around the Deep South, public health officials say new policies and programs are providing a glimmer of hope.

“We’re taking a no-holds-barred approach. That includes working with churches, working out of bars where people at risk hang out,” said Dr. Michael Saag, director of the Center for AIDS Research at the University of Alabama at Birmingham School of Medicine. “And that gives me a lot of hope.”

In Alabama, Louisiana and Tennessee, state public health officials and AIDS activists are focusing on getting people tested and linked up with medical care. Treatment, they say, helps prevent the spread of the virus, because patients with lower levels of HIV in their bodies are much less likely to pass it on to others. Their efforts could serve as models for other states battling the epidemic, public health officials across the country say.

And last year, Louisiana became the only state in the Deep South to expand Medicaid coverage, which means more people living with HIV in the state can access health care, Robertson said.

By tracking people who are HIV positive and making sure they get treatment at every step of the way, Louisiana achieved a “viral suppression” rate of 60 percent among all people living with HIV in 2016, according to the Louisiana Department of Health. That was up from 50 percent in 2014, which was already higher than the national average of 30 percent.

Someone with a suppressed viral load has very low levels of the virus, meaning they are less likely to spread the virus to someone else, will stay healthy longer, because the disease won’t progress to full-blown AIDS, and ultimately, like Robertson, will live longer.

“There are disparities in the South. But we have seen success stories. There are pockets of innovation everywhere,” said Amy Killelea of the National Alliance of State and Territorial AIDS Directors, which represents public health officials who administer HIV and hepatitis programs.

States making inroads against the epidemic all have strong government leadership, community-based groups, clinics and grassroots activists working together to set clear goals, and a timeline to achieve them, said Nic Carlisle, executive director of the Southern AIDS Coalition.

But, Carlisle said, “Each state is unique. And figuring out where the focus should be is a state and local decision.”

The Face of AIDS

The face of AIDS in the U.S. today is overwhelmingly Southern, poor, black — and often rural.

In 2016, 44 percent of all people diagnosed with HIV lived in Southern states, though only a third of the U.S. population resides in the South. And African-Americans accounted for 54 percent of new HIV diagnoses in the South in 2014, far more than their share of the population. That’s despite research that shows that African-Americans are less likely to engage in risky behavior than their white counterparts.

The high rates of HIV/AIDS in the South stems from a confluence of social factors including poverty, racism, persistent anti-gay attitudes, unstable housing, a lack of transportation in rural areas and a lack of access to medical care, Carlisle and other AIDS experts say.

“HIV here lives in the intersection of racism, classism and homophobia,” Carlisle said.

In 2010, the Centers for Disease Control and Prevention began increasing funding to state health departments in the South. HIV prevention funding to Southern health departments and community organizations increased 22 percent between 2010 and 2015, to $201 million. The emphasis is on accessible HIV testing, early treatment, making condoms and the prevention drug PrEP more available, and educational campaigns.

But a March report by the Southern AIDS Strategy Initiative found that despite higher HIV diagnosis and death rates in the Deep South, federal money for HIV prevention and care still lags behind funding for the rest of the country. The CDC could not immediately explain the disparity, but it might be because community-based organizations in the South have been less successful than groups in other regions in securing competitive federal grants, according to Carolyn McAllaster, director of the Duke University School of Law HIV/AIDS Policy Clinic and a co-author of the report.

In 2015, the nine Southern states the report looked at — Alabama, Georgia, Florida, Louisiana, Mississippi, North Carolina, South Carolina, Tennessee and Texas — received $102 less in CDC funding per person living with HIV than the U.S. overall, or about 20 percent less than the national average.

And, some critics, such as McAllaster of Duke, say that funding goes to urban areas and does little to alleviate the crisis in rural areas.

Michael Murphree, CEO of the Montgomery-based Medical Advocacy and Outreach of Alabama, said, “If you don’t look at rural communities, you’re never going to get a handle on HIV in the Deep South.”

In mostly rural Alabama, 297 of every 100,000 people were living with diagnosed HIV in 2013, one of the highest rates in the country. Of newly diagnosed HIV cases in the state in 2014, 71 percent were black, though just 26 percent of Alabamans are African-American.

Murphree’s clinic serves 1,700 HIV/AIDS patients in southern Alabama, and about half of them live in rural areas, some of the poorest counties in the nation. Doctors are scarce. Health outcomes are dismal even for those not infected with HIV.

“It’s a legacy of slavery and poverty,” Murphree said.

Medical teams used to travel four hours round trip to serve HIV/AIDS patients in rural towns, Murphree said. Patients who missed an appointment would have to go without care, their condition growing worse, until a doctor came back.

Now, a quarter of the clinic’s patients are treated remotely, through a telemedicine program in 12 sites that started in 2012. Nurses at the sites use Bluetooth stethoscopes and other equipment so an HIV-trained doctor or nurse practitioner in Montgomery or Dothan can administer a full medical exam remotely. Patients can also get treatment for mental illness or drug addiction through the telemedicine program. And clinic workers are training their peers in South Carolina to use telemedicine to treat HIV/AIDS patients.

The program was started using private grants but now pays for itself through insurance billing for doctor’s visits, Murphree said.

“If we can get a patient in our clinic, we can get them better. We’ve had people who can’t walk and we’re not sure they are going to make it. But they come in three months later and they look great,” Murphree said.

Since 2013, public health workers in Memphis and Nashville have used social media and monetary incentives to get young gay black men tested, as part of a pilot program funded by the CDC. Friends recruit friends — and get a gift card for their trouble.

Federal and state funding for the program ended in 2016, but some agencies are continuing it with their own funds, said Shanell McGoy, the director of the Tennessee Department of Health HIV/STD program.

The state also tracks people who’ve tested positive for HIV but stopped getting treatment and dispatches trained specialists to talk them into getting help, McGoy said.

“It’s like a buddy system or a patient navigation system, to help you schedule your appointments,” McGoy said.

In 2012, Louisiana was one of eight states to win federal grants to create HIV projects targeting minority communities. With the $1.8 million grant, the state began identifying HIV positive people over a three-year period who either had stopped getting treated or never were treated, said DeAnn Gruber, STD/HIV program director for the Louisiana Department of Public Health.

In 2012, nearly two-thirds of HIV positive people in treatment in the state had achieved viral suppression, according to data compiled by the state. In 2016, that number increased to 81 percent, which Gruber attributes to greater attention to getting people treated. As an example, she said, one program gives patients $75 gift cards when they achieve viral suppression.

The Office of Public Health now shares data with the state Medicaid office, and the two agencies meet regularly to coordinate care. State health department workers are required to get extensive training in the role that racism and homophobia play in the epidemic; the vast majority of community HIV/AIDS organizations do the training as well. The idea is to give health care workers a better understanding of how racism works and how it prevents minority groups, who may not trust the medical establishment, from getting help.

And as of last year, Medicaid plans are required to help patients living with HIV to achieve and maintain viral suppression, Gruber said.

As more people living with HIV are able to get their viral loads reduced, the state’s death rates will drop, too, Gruber said.

“It takes years before it will have an impact. But we’re hopeful.”