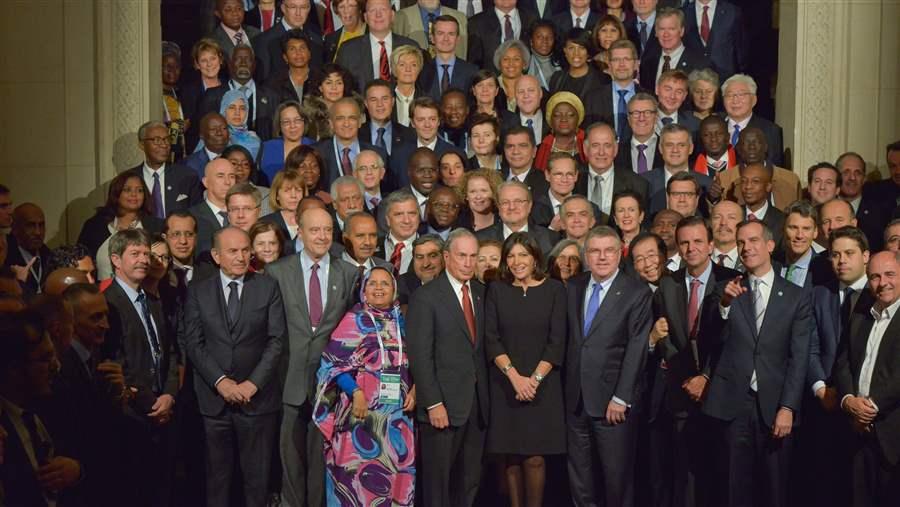 Former New York Mayor Michael Bloomberg, a UN special envoy for cities and climate change, and Paris Mayor Anne Hidalgo, pose with local leaders and mayors from around the world at the 2015 climate talks in Paris.

Just minutes after President Donald Trump announced his decision to pull the United States out of the Paris pact to fight climate change, mayors began announcing their plans to stay committed to it.

“As the Mayor of Pittsburgh, I can assure you that we will follow the guidelines of the Paris Agreement for our people, our economy & future,” Mayor Bill Peduto tweeted last Thursday as Trump concluded his announcement. Six days later, over 280 mayors, from Sunnyvale, California, to Hoboken, New Jersey, had made the same pledge.

Despite Trump’s decision to withdraw, U.S. cities could achieve about 36 percent of the total greenhouse gas emissions reductions required to meet America’s share of the goal international leaders set in Paris two years ago, according to research from the C40 Cities Climate Leadership Group, a nonprofit network of major cities around the world.

But many cities may be hamstrung by Republican governors and state legislatures that are less supportive of policies that would reduce fossil fuel emissions.

If the dozen major U.S. cities affiliated with C40 were to implement the emissions-reduction projects they have total control over, they would only reach 8 percent of their portion of the reductions the U.S. committed to in Paris, C40 said.

Moreover, there are some ambitious ideas, such as charging road users higher fees during rush hour, that cities can’t act on without cooperation from state and regional policymakers. State lawmakers can approve or kill an idea through legislation. They also craft much of the larger policy environment, from rules utility providers must follow to decisions about whether electric vehicle owners get a tax break.

The fact that most big cities are controlled by Democrats, while most states are controlled by Republicans, increases the odds of political conflict. Lawmakers’ disagreements about the scope of the problem, and how to use policy to address it, often fall along partisan lines.

Many state lawmakers are leery of city proposals that would hold back private industry, said Jon Russell of the American Legislative Exchange Council, a membership organization of state legislators who favor limited government.

For instance, if city leaders found they had authority to regulate the carbon emissions of local businesses, “I suspect you would see a snap back from the state to take away those powers,” he said.

For cities, the picture is a little different. In New York, an ultra-dense city where many people use public transportation, C40 says most emissions actually come from stationary sources like apartment buildings — carbon dioxide emissions that are a byproduct of heating and cooling buildings, for instance, or methane emitted by organic trash as it decays. 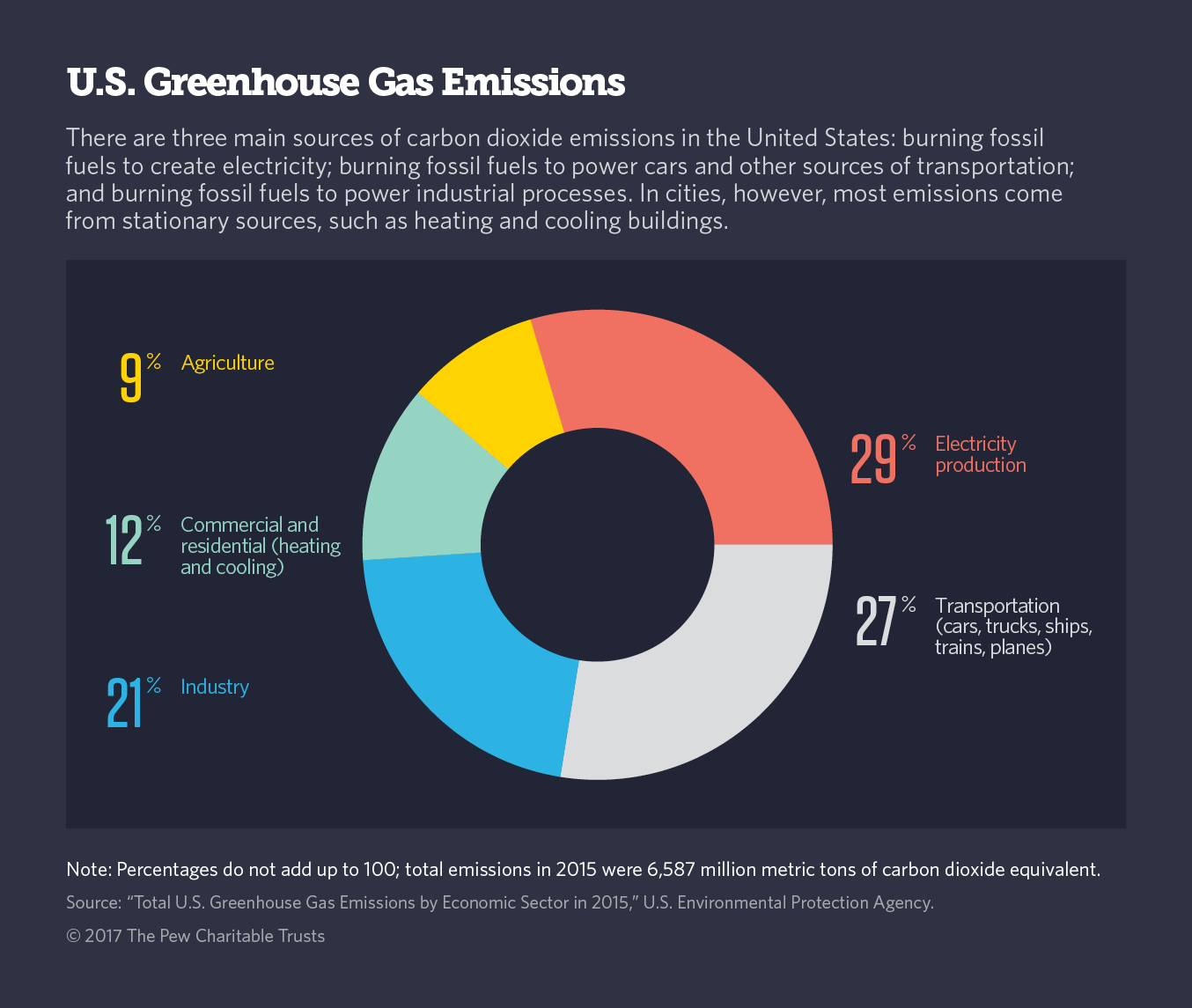 Less than 24 hours after Trump’s announcement, Peduto, a Democrat, issued an executive order that laid out the steps Pittsburgh would take to meet the Paris goal, including action items the city committed to back in 2015, when Peduto went to the Paris talks.

Pittsburgh can implement most of the steps on this list on its own, because they involve city assets. That includes plans to make sure municipal buildings and vehicles rely solely on renewable energy, divest city pension assets from fossil-fuel-based companies, and find ways to recycle and reuse city waste so nothing gets sent to a landfill.

Retrofitting city infrastructure to make it more energy-efficient is a no-brainer, mayors say. “These decisions make financial sense,” said Annise Parker, a Democrat and former mayor of Houston. She says that she always made sure her constituents knew the decisions she was making, such as replacing lightbulbs at more than 2,000 intersections, saved the city money. The lightbulb change went on to save Houston about $10,000 a day.

Some of the other action items on Peduto’s list, however, require help from others. The city must work with the local utility to make the electrical grid more efficient, for instance. It needs local business owners to buy in to its efforts to make sure all buildings in the city use less energy.

That’s a common theme for cities that have made grand plans to fight climate change. Twenty-five cities have pledged to work with utilities to make sure all the electricity used within city limits eventually comes from solar, wind and other renewable sources, for instance.

Such promises, like the Paris agreement itself, are not binding rules and regulations. They’re goals. The point is to make a grand commitment, and then work with partners — local businesses, nonprofits, foundations — to meet it, says Michael Berkowitz, president of 100 Resilient Cities, a nonprofit that prepares cities to face environmental and other shocks.

The Role of States

The Pittsburgh mayor’s office argues that nothing on the executive order requires legislative approval. But other cities have found that they need help — or at least noninterference — from states and the federal government to move forward on elements of their climate action plans.

Cities need outside funding for new rail lines and other major transit projects, for instance. “Any construction project requires federal and state and local sources of money,” said Cooper Martin, program director for the Sustainable Cities Institute at the National League of Cities.

Then-New York Mayor Michael Bloomberg came up against the limits of his power in 2008, when he tried to get legislators to agree to raise tolls paid by drivers coming into lower Manhattan during the workday — a congestion pricing policy that has reduced traffic and emissions in London and Singapore.

The proposal got nowhere. State lawmakers who represented New York City’s outer boroughs and suburbs opposed the increase, saying it would hurt their constituents. Then-Bronx Assemblyman Ruben Diaz Jr., a Democrat, said at the time that it was “morally reprehensible and unconscionable” to charge Bronx residents higher costs for driving into Manhattan without also guaranteeing no transit price increases.

State law also shapes city plans to adopt more solar and wind energy. Atlanta, a partner of 100 Resilient Cities, is funding the installation of solar panels on city buildings partly through a financing scheme called a power purchase agreement — a contract the state government began allowing in 2015. “Without that, we would not be able to finance the city solar program,” said Stephanie Stuckey, Atlanta’s chief resilience officer.

State lawmakers and regulators decide if solar panel owners can sell the electricity they generate back to the grid and how much they get paid for doing so. If the price is too low, it won’t make financial sense for homes and businesses to put solar panels on their property. Utility regulators can also block cities from creating their own incentives, such as a rebate for installing a solar system.

And although cities have substantial control over zoning and land use, state lawmakers have the final say. Last year, Arizona lawmakers banned cities from requiring local businesses to track and disclose their buildings’ energy and water use — a requirement Phoenix had been considering.

California, Washington state and several cities, including Pittsburgh, require certain privately owned buildings to measure their energy use and compare it to the average for similar buildings. Asking property owners to track their energy and water use can nudge them to find efficiencies and lower emissions.

The preemption law Arizona legislators passed said that requiring property owners to measure and report their energy use was “a matter of statewide concern,” and that small businesses would be hampered by the cost of compliance and inconsistent rules across the state.

Martin of the National League of Cities says that cities temper their plans to counter climate change in states where lawmakers aren’t likely to be supportive. “You see a lot of proposals that might have been bolder, or might have gone a little bit farther, if the city had had its way,” he said.