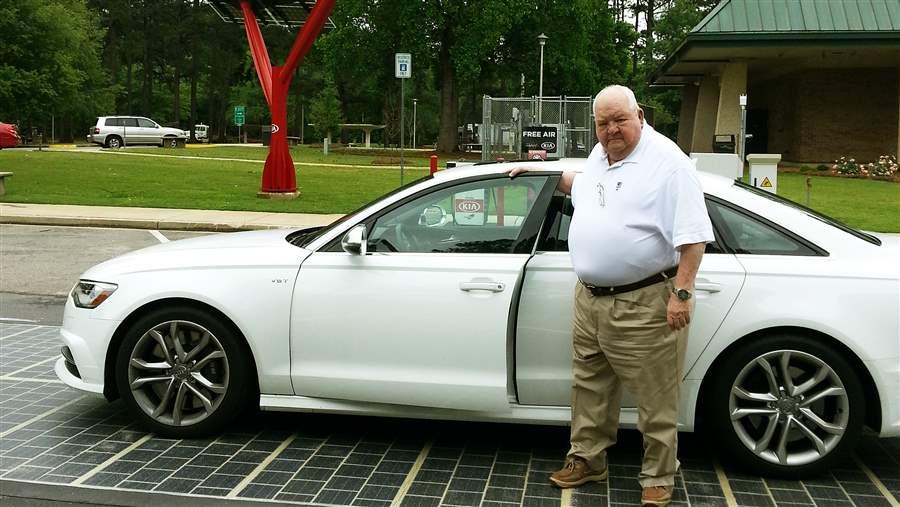 John Robinson of Mobile, Alabama, parks his car on a solar road surface in front of a “solar tree” at the West Point, Georgia, visitors center on Interstate 85. New technologies for green, sustainable highways are being tested near the Georgia-Alabama border.

WEST POINT, Ga. — Just past the Alabama border, in a bit of rural Georgia filled with manufacturing plants and distribution warehouses, there’s an 18-mile stretch of Interstate 85 where new technologies are being tested for what could be a green highway of the future.

The long-term goal is to build the world’s first sustainable road, a highway that could create its own clean, renewable energy and generate income by selling power to utility companies, while producing no stormwater runoff or other pollution and eliminating traffic deaths.

The project, called The Ray, is an unusual collaboration between state agencies, private companies, and a family foundation that is paying for it. For now, much of the action is centered around the West Point visitors center at exit 2, where there’s the first drivable solar road surface available to the public in North America and, out back, a drive-thru automated tire safety station.

“There are pilots and experiments going on all over the U.S., but everything is atomized, it’s just pieces,” said Robert Puentes, president of the Washington, D.C.-based Eno Center for Transportation, a national think tank. “In Georgia, it’s all in one package, and there’s nothing else like what’s going on down there.”

Some states, including Georgia, are using road sensors to monitor weather or improve traffic flow. Transportation departments in more than a dozen states, from Oregon to North Carolina, are using renewable energy technologies on highway rights of way.

Solar panels at Michigan rest areas and along Massachusetts highways are generating energy and saving the states money. Like The Ray, some states also are experimenting with embedding technology in the road.

In Colorado, a Transportation Department pilot program will test technology that would shift stored energy from the road to electric trucks driving on it so they could charge their batteries as they drive at full speed. The California Department of Transportation is planning to test technology that embeds photovoltaic cells in the pavement to generate power. It will be installed at exit and entrance ramps of a freeway rest area north of Los Angeles by mid-2020.

California also is experimenting with kinetic energy. In April, the California Energy Commission awarded more than $2 million in grants to test technology that uses piezoelectric sensors, crystals that generate electricity when subject to pressure or vibrations, as when vehicles drive over them. Wires in the road would connect to a transformer that collects the electricity, which could be added to the grid or used to power roadside lights and signs. The more cars that travel over the sensors, the more electricity would be generated.

Some experts are skeptical about putting wiring in the pavement, saying it could cause maintenance problems.

But Mike Gravely, a senior electrical engineer on the commission, said he doesn’t believe it will be a significant problem and that he thinks the pilot projects will be technically successful.

“The big question we’re trying to answer is, Will it create electricity comparable to the price of solar or wind?” Gravely said. “If it can, it may be one of our renewable solutions for the future. The potential is huge.”

The federal highway system was created in 1956 to help move people and goods from Point A to Point B. Little has changed from those early days, other than lanes being added and signs updated, except that highways have gotten dirtier as more emissions from cars and trucks have polluted the air, and more stormwater runoff has tainted rivers and streams.

The goal of The Ray is to reinvent the highway so it can restore ecosystems, generate new ones, and provide the energy that moves people and goods. It was named after the late Ray C. Anderson, a local industrialist who was founder of Interface, the world’s largest carpet tile manufacturer. He grew concerned about his industry’s impact on the environment and challenged his company to eliminate any negative environmental impact by 2020. So it began using largely recycled or renewable materials, reduced its use of petroleum and cut pollution.

Anderson’s daughters were pleased when the Georgia Legislature in 2014 named the stretch of I-85 after their father, who died in 2011. But they found it ironic that his name was on “a dirty road that polluted the environment,” said his daughter Harriet Langford. So the daughters and the family foundation named after him started a project aimed at honoring Anderson’s environmental legacy.

At first the goal was beautification, said Langford, a trustee of the foundation and the president of The Ray, the nonprofit it created. But then the foundation and Interface asked Georgia Tech to do a study of the memorial highway, later branded The Ray as well, that could serve as a blueprint on how to make it a national model of sustainability and innovation.

“No one had looked at a highway holistically,” Langford said. “We need to figure out how to make it into a restorative highway.”

The Ray also partnered with the Georgia Department of Transportation, which agreed to work with the staff and offer the highway right of way and visitors center, where traffic is much lighter, as testing sites.

So far, the department has spent less than $10,000 on projects at The Ray, other than some staff time, said John Hibbard, the agency’s operations director.

“This is a really neat project that encourages us to do things we might not have tried otherwise,” Hibbard said. “DOTs can be pretty stodgy organizations.”

One of the most eye-catching technologies at The Ray is a 20-foot-high bright red steel “solar tree” in front of the visitors center. It has 12 large photovoltaic panels attached and was installed by Kia Motors Manufacturing Georgia, a partner in the project that operates a huge manufacturing plant just up the road. The tree offers a free charge to electric vehicles in about 25 minutes and feeds power into the grid when it’s not being used.

In the middle of the parking lot is the Wattway, a drivable solar pavement developed by a French company that is being tested outside of France for the first time. The testing strip is 52 feet long and made of thin, skid-resistant solar panels with glass overlay. It generates clean energy from the sun when not obscured by cars, and feeds into the grid, helping to power the visitors center.

Allie Kelly, The Ray’s executive director, concedes the Wattway technology, which uses French-made components, is expensive, although she would not disclose the cost. If the project moves out of the pilot stage, she said, The Ray could use American or Chinese solar panels, which cost less.

Behind the visitors center is the nation’s first public WheelRight tire safety station, which looks like a McDonald’s drive-thru. Cars drive slowly over the black-and-yellow striped pavement, where sensors take measurements. Drivers then stop at a touch screen kiosk that spits out a printed sheet or sends a text message within 20 seconds showing tire pressure and tread depth.

The Ray is leasing the British-made device for $39,000 a year, with help from Kia. Nearly 1,200 drivers have used it since it was installed in December, said Anna Cullen, The Ray’s spokeswoman.

Underinflated and overinflated tires can lead to skidding and blowouts, increasing the chance of crashes, injuries and deaths. Every year, there are about 11,000 tire-related crashes and nearly 200 fatalities, according to the National Highway Traffic Safety Administration.

The Ray also is focused on restoring the environment along the highway. It has invested $250,000 in landscaping the median, planted wildflower meadows, and joined Kia employees, the nonprofit Georgia Conservancy and the Chattahoochee Nature Center in creating a 7,500-square-foot pollinator garden at the visitors center. The state transportation agency helped with the projects.

At exit 14, a planned 5-acre, 3,000-panel solar farm will generate energy for the grid and nearby businesses. The Ray, the transportation department, the Georgia Public Service Commission and Georgia Power are working on the project, and ratepayers will foot the bill.

At another Ray project, on the medians near exit 6, the transportation department has planted 8 acres of native wildflowers and grasses, creating “bioswales,” drainage ditches that filter road pollution and improve water quality.

The project probably won’t save tax dollars because contractors still need to mow along the side of the road, but the $8,000 the state paid for seeding and installation could yield substantial environmental benefits, said Chris DeGrace, landscape architect for the transportation agency.

Vision for the Future

The Ray is planning to test other futuristic ideas.

One is technology that it patented that would use solar road studs with sensors to collect data from the surface, such as whether ice is forming or a deer is crossing ahead. That information would be sent to drivers through the cloud or via flashing colored lights on the road. Other ideas include sound barriers made of solar panels and a wind turbine that could turn traffic flow into energy.

Kelly wouldn’t disclose The Ray’s budget and said she doesn’t know how much the foundation will end up spending on the open-ended project. IRS records show that the foundation spent $764,550 on the project in 2015.

Eno’s Puentes said he has no doubt The Ray’s impact will be significant. “Once they figure out what works, it will have a ripple effect throughout the country’s transportation system.”