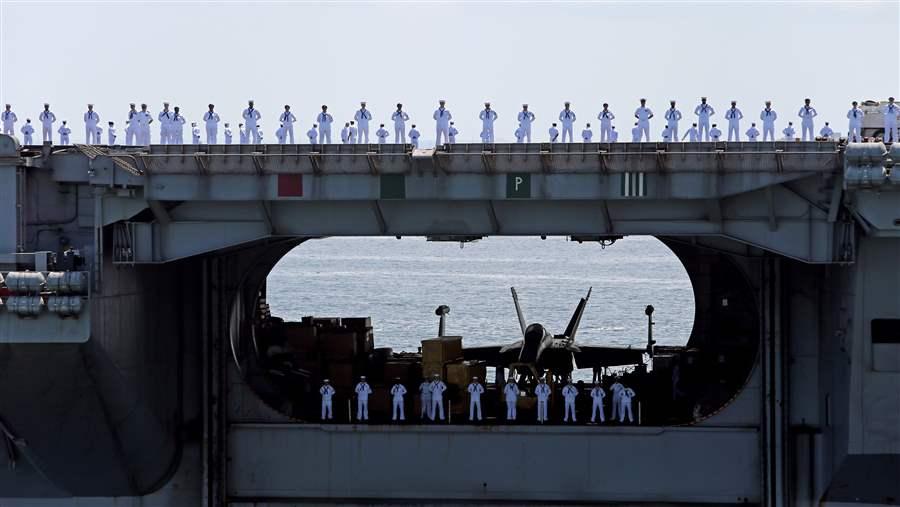 Advocates for children celebrated last year when President Barack Obama signed a law meant to keep military officials from concealing child abuse and neglect on military bases. But U.S. Department of Defense officials say the law doesn’t address one key reason why military children who are mistreated may not be getting all the help they need.

Talia’s Law, named for a 5-year-old girl who was killed by her soldier father on a military base in Hawaii, requires military officials to immediately report any suspected child abuse or neglect involving military families to state social services agencies. But there is no reciprocal requirement for social services agencies — the agencies aren’t required to let the military know about reports of suspected child abuse and neglect in military families.

That’s a problem, Pentagon officials say, because if the military doesn’t know about the suspected abuse, it can’t connect families to the vast resources it has to help victims and treat abusers. Doing so is especially urgent now, the officials say, as many social services agencies face budget restraints and lack the resources to help families in need.

For the past three years, Pentagon officials have been asking states to enact laws or set policies that require local child protective agencies to ask families they work with if they are in the military, and, if they are, to immediately report any suspected abuse or neglect to the military. Fifteen states have enacted such laws or started to follow such policies that were already in place. Nine more states are considering similar bills this year. 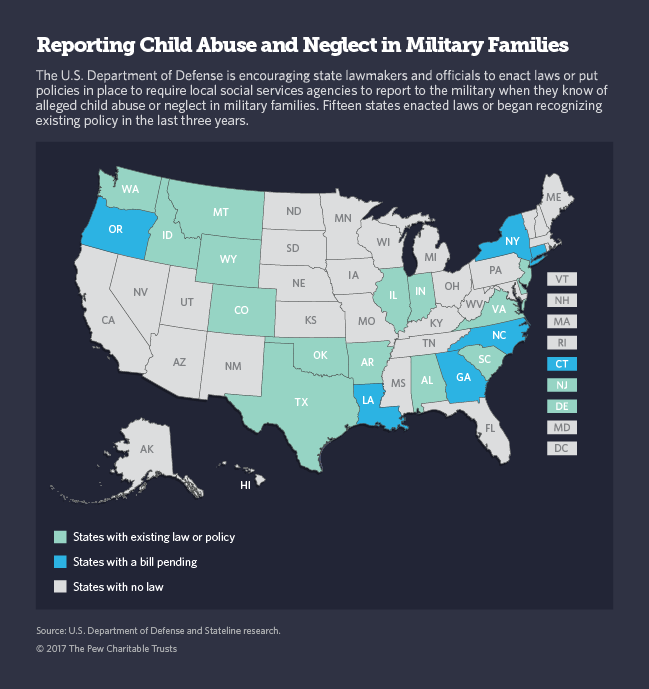 Addressing child abuse and neglect in the military can be complicated. Without the laws, the military may not find out about the neglect or abuse until a service member is charged criminally. The laws require reporting far before that — shortly after child protective services finds out about suspected abuse.

But military families, child protective workers and others worry that if suspected abuse by a service member is reported to the military, it could be career-ending.

Social service officials say they consider the military to be a service member’s employer, and in other circumstances they wouldn’t tell employers about suspected child maltreatment — especially before it’s been substantiated.

Harold Cooney, who works on state policy as a northeast regional liaison for the Defense Department, said when he hears this concern, he reminds social service workers that most employers don’t have an entire division dedicated to treating abusers and helping their families.

The military wants to know every time one of the roughly 1 million children with parents in the military may have been victimized, so every allegation can be addressed, said Kathy Robertson, program manager of the Defense Department’s Family Advocacy Program.

“It impacts the child, the whole family and the military unit,” Robertson said. “Our whole goal is to strengthen military families and to rehabilitate them.”

But not everyone agrees that the military is doing all it can to protect children. The military has received criticism in the last few years from advocates for children for failing to report to police and local social services when it knows of abuse and neglect, and for how it addresses it.

The Family Advocacy Program has about 2,000 counselors, clinicians and other employees stationed at military installations to help families in which abuse or neglect may have occurred. Along with counseling for victims and treatment for perpetrators, the program offers prevention services such as classes for new parents.

Once suspected child maltreatment is reported to the program, clinicians determine whether it meets the program’s definitions of abuse and neglect. That determination is not used for legal proceedings, but rather to determine whether the program should formally document the abuse or neglect and require treatment.

Robertson said the program’s criteria for determining maltreatment are less forgiving than those used by state child protective services agencies. “We err on the side of prevention,” she said. “We really try to engage that family.”

In the last decade, the rate of suspected child maltreatment occurrences reported to the Family Advocacy Program, as well as the rate of occurrences meeting the program’s criteria for abuse and neglect, have both increased. About seven instances of child maltreatment were reported per 1,000 military children last fiscal year, compared to five per 1,000 children in fiscal 2007, according to a recent Defense Department report. 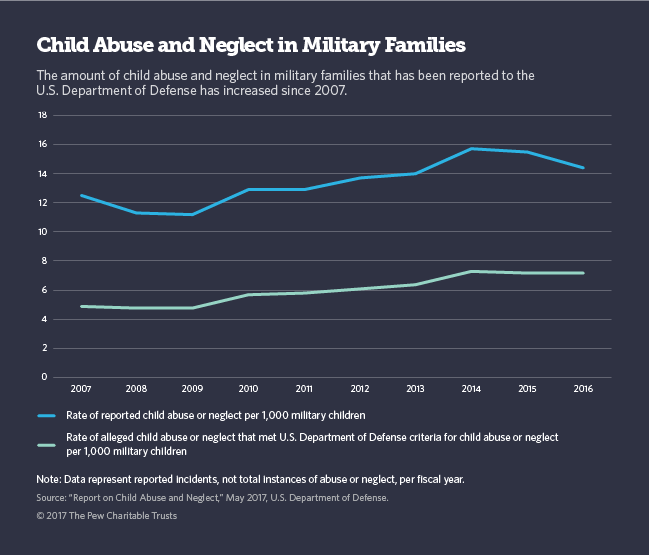 The increase was primarily due to an increase in reports of child neglect, including a lack of supervision appropriate for the child’s age and exposure to physical hazards such as bathtubs, electrical outlets and unsafe cribs. Of the 13,916 instances reported to the program last fiscal year, 6,998 met the military’s criteria for child abuse or neglect; 4,960 children were victims of abuse or neglect.

The rate of child maltreatment reported to the military is about half of what is reported in civilian families, according to the report. But David Rubin, director of PolicyLab at Children’s Hospital of Philadelphia, said the actual rate of abuse and neglect is probably about the same as in the civilian population, or perhaps higher.

In a study released last year, Rubin and a group of researchers at PolicyLab found that just 1 in 5 U.S. Army soldiers’ children who received a medical diagnosis of child abuse or neglect had a corresponding Family Advocacy Program report. The reason for that, Rubin said, is not because the military knew about maltreatment and ignored it, but rather that military officials were simply never told about the doctors’ findings.

“When I think about this late at night,” Rubin said, “I think there are kids out there that aren’t getting reported. And what’s the magnitude of that?”

Military officials insist that getting treatment or other help from the military won’t affect a service member’s career. The work of the Family Advocacy Program is separate from military court proceedings that are used to determine punishment for a crime. According to military rules, a commander decides when to start military court proceedings, and the commander can’t take any action simply because of a finding from the Family Advocacy Program.

When a service member is accused of a crime such as child abuse or neglect, they can be tried in either civilian or military court, or both. Punishment in military court can result in jail time, a reduction in rank or a dishonorable discharge.

In 2015, a national commission examined how to ensure that no children die from abuse or neglect. To help military children, the commission recommended federal legislation to require information sharing between state agencies and Defense Department family advocacy offices.

The Defense Department is asking states, not Congress, to take these steps because the rules will need to be administered and enforced at the state level, and they should be crafted to local officials’ liking, said Bill Huleatt, a social worker for the Family Advocacy Program.

Even in states that haven’t enacted these laws, many county social services agencies have already agreed to report incidents to family advocacy offices at local bases. But whether that is happening is unclear.

In Maryland, which does not require social services agencies to report child maltreatment to the military, Anne Arundel County’s social services agency has agreements with the two military installations there: Fort Meade and Naval Support Activity Annapolis. But the county still doesn’t always report to military bases, according to Susan Tyzack, assistant director of social services. If it is a serious event and the child is in danger, it does. If not, the county asks for the family’s permission to tell the base, and most of the time, she said, the family agrees.

Maryland state Del. Geraldine Valentino-Smith, a Democrat, introduced a bill this year to require agreements between local social services agencies and the military. She said at least one base in the state was having difficulty establishing agreements with surrounding counties. The bill failed, but Valentino-Smith said she would introduce it again if the issue doesn’t get solved at the local level. Social services agencies in the state are facing budget restraints, and the military’s resources could help, she said.

Cooney, the Pentagon liaison in the northeastern states, said he sometimes has a hard time convincing service members that having suspected abuse or neglect reported to the military won’t tarnish their career.

But Cooney also acknowledges that there are times when punishment is warranted. Speaking to a Maryland House committee considering Valentino-Smith’s bill this year, Cooney told lawmakers, “if he’s abusing a child or a spouse, maybe it should be detrimental to his career, or her career.”

Whitney Gregg, a counselor near Fort Bragg in Fayetteville, North Carolina, said the military families she works with are often concerned that information about their relationship or mental health issues will somehow make it back to their supervisors.

Oftentimes, she said, they want to “keep it within the family,” in part because of the stigma associated with mental health and relationship problems.

Military families face unique stresses, including frequent moves that take children away from schools, spouses away from jobs, and entire families away from support systems, Gregg said.

These stresses could put military children at higher risk of maltreatment. In another study, Rubin and other PolicyLab researchers found that children under the age of 2 in military families were at a higher risk of abuse or neglect in the six months after a soldier returns home from a deployment.

The fact that military families move often is another reason the military should know about child abuse and neglect, Cooney said. Otherwise, an abuse record may not follow the family to a new posting.